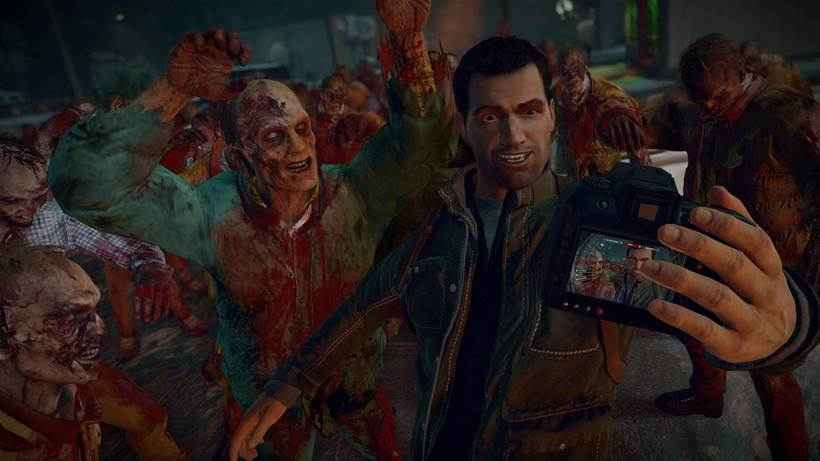 Dead Rising 4 should, by all accounts, be a big dumb hoot. It sees the return of Frank West. There’s ridiculous weapons and costumes. And it has enough zombies to cover two apocalypses. Most importantly, it’s set at bloody Christmas. So why does it feel more like an emotionless husk of what the series once was?

The return of Frank West, the awkward, boorish photojournalist ‘hero’ of the first game, holds potential. Potential for Dead Rising 4 to scale back to the stupendously ridiculous nature the series was born from. Yet the reality is that he’s back merely in spirit, as is the game’s nature.

For Dead Rising 4, Frank is inexplicably dragged back to Willamette. The site of the first zombie outbreak has moved on, even opened a new shiny mall! Of course, Frank’s not here on vacation. The dead have risen again during an outbreak on Black Friday, and Frank is racing to break the story. His protégé has a headstart on him, and could be in more trouble than it’s worth. Somebody’s been tinkering with the zombies, and they could become a lot more dangerous as a result.

Dead Rising games have expanded far beyond the relatively miniscule confines of the first game’s mall. So not only is the new mall much bigger than its predecessor, the surrounding area is also explorable. Anywhere you go is chock-full of the undead, with huge swarms of them in town. On occasion, it’s impressive, but never to the extent of that initial wow factor the first game’s horde was. That’s mainly because interest and excitement in zombies plateaued some time ago, and now the vast majority of interactions with the shuffling undead here lacks the impact and intimidating weight it once did. Personally speaking, Dead Rising was the game that almost convinced me to buy an Xbox. I was deeply in love with anything that featured zombies, and Dead Rising represented a videogame version of Dawn of the Dead, albeit with the slapstick of a Shaun of the Dead mixed in. It was endearingly awkward, and that formed a huge part of its appeal. Dead Rising 4 acts as the latest milestone to how games have changed in the last decade or so.

For instance, the aesthetic. Willamette may be drenched in the spirit of Christmas, but there’s not a huge amount of festive cheer to the world. Sure, it is filled with walking, rotting corpses, but there’s a washed out aspect to everything. Dead Rising continues to shuffle towards realism, and further away from the comic book stupidity that made up such a large part of its identity. Frank himself has undergone a redesign. It’s one that makes him look more like Michael from GTA V than the creepish, unusual man with an unjustified level of egoism that he was. His humor is scattershot, and while occasionally funny, it’s a world away from the character he actually is. It doesn’t help he’s also had a change of voice actor to boot.

The weapons remain as gleefully over the top as ever thankfully. If nothing else, Dead Rising 4 does at least provide a wonderful selection of death-dealing equipment. From the standard guitars, mops, knives, and guns. To Power Armor, Ice swords, and battle cars. The amount of ways you can off a zombie is pleasingly high, but the melee combat in general is a little underwhelming, sparking to life only with the more ludicrous end of the spectrum. Gunplay, and fights against gun-toting humans are also pretty unsatisfying, verging on irritating, due to the clunky nature of Frank’s movement. It’s a blessing that encounters with Maniacs (formerly Psychopaths) are optional, because so much frustration lives in these encounters. Especially if you happen to be wrongly equipped.

Problem is, this is the fourth (more if you count spinoffs) time of seeing this formula, and it really hasn’t gone all that far from what it was in 2006. Long-time PlayStation fans will likely find it less of an issue if they’ve missed out on 2013’s Dead Rising 3, but for non-Xbox One-owning Dead Rising fans awaiting this first slice of new zombie culling for seven years? It’s a touch disappointing. The series has gone from vibrant, fumbling Japanese charmer to muted Americanised trudgefest. There’s a significant imbalance in how the game handles humor and drama. This causes the game to deliver everything in an uneven manner, including the mechanics. That’s made ever more glaring by the technical hiccups I encountered. I came across some stuttering and pop in. That was the insignificant stuff in relative terms, but by hell does the game chug along poorly at times. At least this occurs in busier areas. My biggest grievance comes from two separate occasions where a save bug crashed the game every time I tried to load my progress. This resulted in two reinstalls, and eventually having to start further back in my playthrough twice. This might not be experienced by many others. Or at all if it gets patched, but nothing highlights the flaws of a game better than being forced to retread swathes of uninteresting busywork.

This edition does at least feature a few extras. Frank Rising sees a spinoff story featuring Frank West as a zombie. Well sort of. It’s a daft, overly complicated plot that is resolved in tragically stupid fashion given the culmination of the main story. It’s worth noting the main game’s ending is…contentious. If the treatment of Frank West as a character had already seemed unfair, the ending really rams it home. The Frank Rising DLC just twists the knife in.

Co-op is a definite highlight. It brings back a form of the timed version of Dead Rising as players compete in timed objectives. The base fun of Dead Rising’s concept shines through with a pal. It’s not essential, but there are few things more enjoyable than team-twatting the undead with the world’s stupidest weaponry.

Elsewhere, there’s a novelty golf mode that suffers from the same imbalance of zaniness and mechanical credibility. Then there’s the Capcom Heroes mode.

Capcom Heroes is the newest piece of content in the package. In it, Frank West dons the costumes of a selection of Capcom’s finest heroes and heroines, gaining abilities of each. You access these costumes via arcade machines strewn about the game world. These outfits include characters from Ghost Trick, Street Fighter, Mega Man, Resident Evil, and Viewtiful Joe. There’s even a ‘Classic Frank West’ costume, which is both nice, and a bit sad. This mode is set in the same world, with a slightly different spin on it. It’s slight, but a highly enjoyable aside that taps into the dumb side of the franchise that’s desperately needed elsewhere.

It’s difficult to call Dead Rising 4 a terrible game. On a fundamental level it delivers some of what made the series popular. The problem lies in how it’s executed, and it’s executed in a rather dreary, unimaginative manner for the most part. Technical issues don’t help either. Capcom Vancouver have outwardly approached making Dead Rising 4 a return to the series’ roots. Closer inspection shows the rot of modernisation has bored deep into the game’s DNA, and on this trajectory, Dead Rising in any form won’t be long for this world.

This is definitely a Dead Rising game, but it certainly isn’t the Dead Rising it once was. This is the greying, shuffling husk of a lovably naff series, turned horrifically bland.