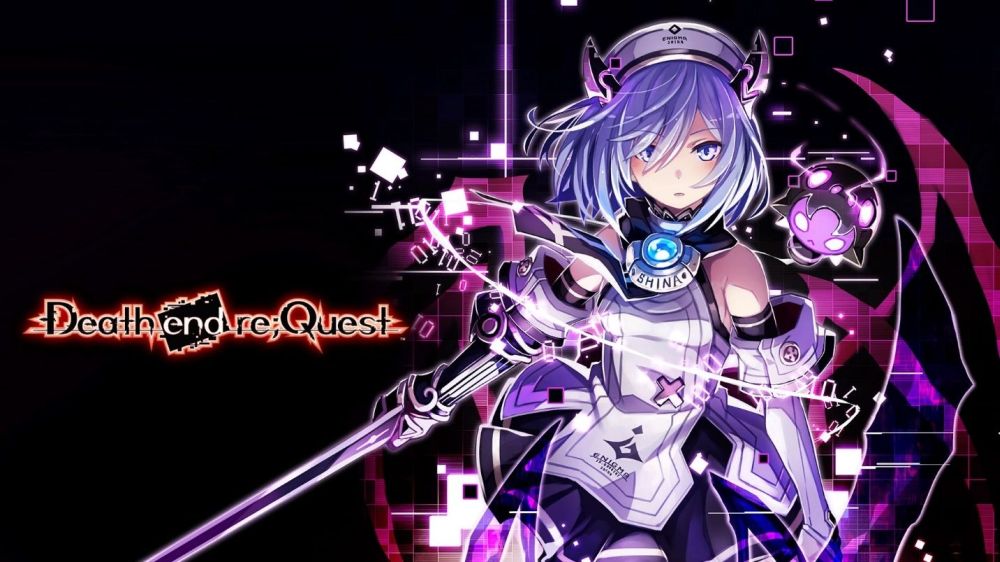 The RPG/visual novel hybrid, Death end re;Quest, starts off with Shina, stricken by a form of amnesia and unaware of where she is or even her name. In a very short time, she is greeted by a disembodied voice, a man named Arata, who helps her escape her predicament and helps her rediscover parts of her memory.

She is a video game programmer caught in the very digital world she created. However, the world has changed. It’s not like how she created it, and she’s hardwired into her VR headset, unable to escape the game world.

A large part of this game focuses on its visual novel presentation. While I found myself rolling my eyes at peculiar “service-y” moments more often than I would have liked, the actual dialogue and characterization are done quite well.

Characters quickly begin to feel relevant and even important, despite all the oversexualized moments (and grossly overdone jiggle physics in still images). At the same time, there are huge chunks of dialogue in Death end, with small gameplay excursions sprinkled about. This is not quite as hyperbolic a ratio as it was in Utawarerumono, but it’s still quite a hill to acclimate to climbing.

One of the more interesting things about Death end is how narratively dark and gruesome it is. The opening moments really begin to set the tone, but it’s the Bad Endings that establish that tone. Throughout the game, you encounter character choices.

Many of them result in one of your character meeting its demise. These are gruesome and rather vivid, even if they’re mostly just audio depictions behind a dark screen. These help to cement connections with characters, because most games never place their characters in a death scene. These aren’t permanent, since the game brings you back to the previous save, but they still add some needed weight and circumstance.

The greatest strength to this game has to be its combat. While not riveting, there is something oddly addicting to it. Combat moves in a series of rounds. Each character is allotted three actions each round to combine skills and attacks.

Combinations are not limited to attack type, either. You can combine basic attacks with abilities and even using items as well. However, there is a payoff to using three attacks in a round, as they work as a sort of combination. The combination results in a heavy attack that sends the enemy flying across the field, inflicting damage with and to anything it touches. This includes other enemies as well as the battlefield’s walls.

Another depth to this is chaining attacks between characters. When you knock an enemy across the map, you can hit them at an ally, and your ally smacks them another time. Sprinkled around the battlefield are mines that debuff and do damage to anything that steps on them. So, slinging enemies across these mines adds to the damage-dealing.

To add to that, each character has an additional form, Glitched Mode. Once active, each character takes on an unnecessarily-skimpy outfit and deals heavy damage for a short time. This form follows the standard combat conventions but with extra damage and forced fan service.

What really iced the combat cake is how combining different abilities in the three-attack rounds sees your character earn new abilities. There is no really clear list of how to unlock every ability, but with time and trial, your characters have plenty of powers to take on anything.

Visual creative choices aside, I really had a great time with combat, even if it’s not incredibly flashy.

The world itself lacks a great deal on almost all counts. These worlds present themselves fairly well, albeit not too flashy, much like most of the game itself. However, most of these areas are narrow and fragmented.

Story quests themselves also make things worse, requiring a great deal of backtracking for miniscule reasons. In one instance, I had to find keys to unlock new sections of a map I had been in for the better part of three hours. I had managed to find one key, but it somehow didn’t match up with the only door I had to unlock. So, I had to spend upwards of an hour scouring the same mapto find the key I needed to continue.

This happened because the map labels important locations for narrative movement but not items. You always know where you need to go, but you never know what you need to get past those points. Death end re;Quest is quite hefty on the visual novel aspect, with plenty of cutscenes going on for the better part of an hour. Jumping between narrative consumption and tedious world exploration is a hard switch to flip.

All in all, Death end re;Quest is the kind of RPG RPG fans look for when wanting something different. It offers basic standards for the genre while combining many of them in appealing ways. Combat is the real strength of the game, with the narrative having a compelling enough nature to keep things moving. World exploration leaves a lot to be desired, however, as it greatly degrades the pace of a game that’s already moving at a snail’s pace. Death end isn’t for everybody, but it’s perfect for the RPG fan looking for something outside his or her comfort zone.

Death end re;Quest is far from perfect, with pacing and creative choices dragging things down. However, a simplistic, yet appealing combat and well-delivered character-based narrative make this a journey RPG fans can sink their teeth into. It may not be for everyone, but it has merit.