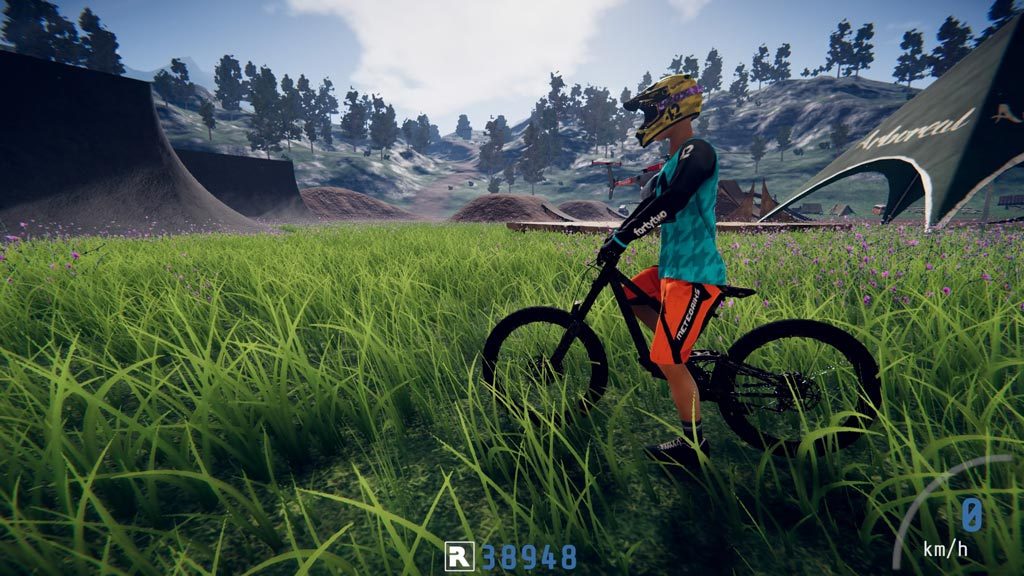 Descenders PS4 Review – In the last 30 years, cycling has gone from a casual pastime or a necessity for those who couldn’t afford a car, to one of the most lucrative hobbyist businesses in the world. M.A.M.I.L.s (middle aged men in lycra) spend on average around 50% of their income on their bicycles, upgrades, specialist gloves, body hugging lycra, groin oil, bells, padding and lights – all in a desperate attempt to fight the ageing process while taking part in a stage of the Tour de France while cycling to work.

Having spent such a vast sum on pretending to be Chris Froome, it becomes necessary to cycle in the middle of lane on a busy road, only allowing the support car to pass them should it manage to keep up. Fortunately mountain bikers are less conspicuous, choosing a crazy path down a mountain in order to dirty their lycra. Descenders plugs the gap in the gaming market with an arcade simulation of the sport, but does it cross the finish line caked in mud, or something more pungent?

Aside from the slightly turgid and niche Tour de France games and the lovable indie classic Lonely Mountains Downhill, there are precious few cycling games on the PS4 and the nearest equivalent to Descenders is probably Steep, which involves no wheels at all. The principle is the same – start at the top of a mountain and try to accrue trick points on the way down to the finish without being wiped out by a tree or a failed landing.

Descenders USP is its procedurally generated tracks, meaning no combination of twists, turns, jumps or obstacles are ever repeated on each short stage. While this prevents the player from being able to learn the routes and nail them as they would other downhill sports games, it’s possible to learn the individual obstacles which become familiar as you approach them. Arguably, the unpredictable nature of the mountain tracks is a more accurate representation of the sport, but the routes can often feel repetitive due to the obvious way in which the curves and obstacles are generated.

Jumping Off The Sun

The main crux of the game is the Career which takes you through four different worlds, each with around twenty stages with which you plot a route to the ‘boss’ stage which is conspicuous with its massive final jump. Each of the stages is between 30 and 60 seconds long and consist of a variety of types such as race, danger zone, medic, fire node, sponsored and riders eye view.

Your rider starts with five lives which deplete with each fall, meaning that a particularly bad stage can leave you with just one life left to negotiate the rest of the stages to the ‘boss’ level. Fortunately, a random challenge is available on each stage such as ‘Perform two front flips’, or ‘Don’t use the brake’ and if you successfully complete these, you will be rewarded with an extra life at the end of the stage.

‘Rep’ points are accrued by performing stunts or tricks and this enables bonus abilities which can be chosen depending on your preferred riding style. Tricks are performed through either using the right stick in mid air for flips, or by holding L1 and using the right stick for more elaborate ‘No handers’, ‘Superman’ and other precarious saddle-free activities while in the air. Other than that, the basic controls are nicely responsive, so just making your way down the mountain without the tricks is a satisfying and exhilarating experience. The force feedback combined with the sheer speed of the straight downhill routes are some of Descenders finest moments.

Those About To Die

The default rider view is the close third-person view which does the trick nicely. Should you want to challenge your eyes and your stomach, switch to the first-person view for true speed and dizzying hi-jinks. Landing a flip with this view is one of the most satisfying challenges and highly recommended.

While you will spend the majority of your time with the Career modes earning Rep and unlocking extra garb and equipment, the main hub features a bunch of ramps, stunt opportunities and ‘sheds’ where you can kit out your rider. The generic rider cannot be modified and strangely there is no choice between male and female, and you can guess what sex the default rider is.

The menu also offers up ‘Freeride’ where you can choose how the individual course is generated, which is the closest you can get to designing your own courses. There are also some theme park style obstacle courses for a bit of light relief from the mud, although these are punishingly hard and belie their bright colours with a dark learning curve.

The online multiplayer option for challenging other players to earn the most rep or beat your time on a variety of stages has plenty of potential, and while the pre-release lobby was always empty, I can imagine that this element will give Descenders a healthy amount of longevity as the Career modes eventually start to feel quite lonely.

The limited smattering of licensed songs which accompany you on your journey through the undergrowth soon start to grate, and it wasn’t long before I was forced to silence the well-produced but incongruous music. Smooth dance beats didn’t quite fit the vibe of the game and I was yearning for more of a selection of alt-punk 80s classics from the likes of fIREHOSE, Black Flag and No Means No to match the hectic extreme nature of the sport but hey, what do I know?

Graphically, the courses are well rendered, bright and clear although on closer inspection there are some quite dated textures and flora but the excellent lighting makes up for this. Perhaps a bit more variety in obstacle design and extraneous trackside decoration would have helped to reduce the feeling that the last-gen look of the game reflects the simplistic gameplay loop.

The Machine Demands A Sacrifice

Due to the repetitive content of the stages and the cruel rogue-like system of having to replay each world many times over in order to unlock a shortcut to the next, Descenders worked best for me in small doses. That way, I could appreciate its speedy charms without being reminded of the irritations and limited scope involved. The multiplayer will doubtless reinforce how enjoyable it can be pulling off tricks at a breakneck speed with friends online, and you’ll forgive the fact that each stage takes nearly as long to load as it does to play.

As an old-school arcade blast like Tony Hawk’s Pro Skater or SSX, Descenders succeeds in testing your reactions in an accessible way without ever troubling your brain too much. With a little more depth and detail and a slight rethink of the death system, it would definitely improve matters, but if you enjoy it for what it is, you’ll get the most out of one of the best mountain biking games on the console right now.

Descenders is out now on PS4. Review code supplied by No More Robots.

Descenders offers up some excellent arcade biking thrills in short bursts, with the multiplayer prolonging the fun. The simplistic nature of the gameplay will grate eventually, but it's worth investigating for those who want a two-wheeled adrenaline rush without too many frills.