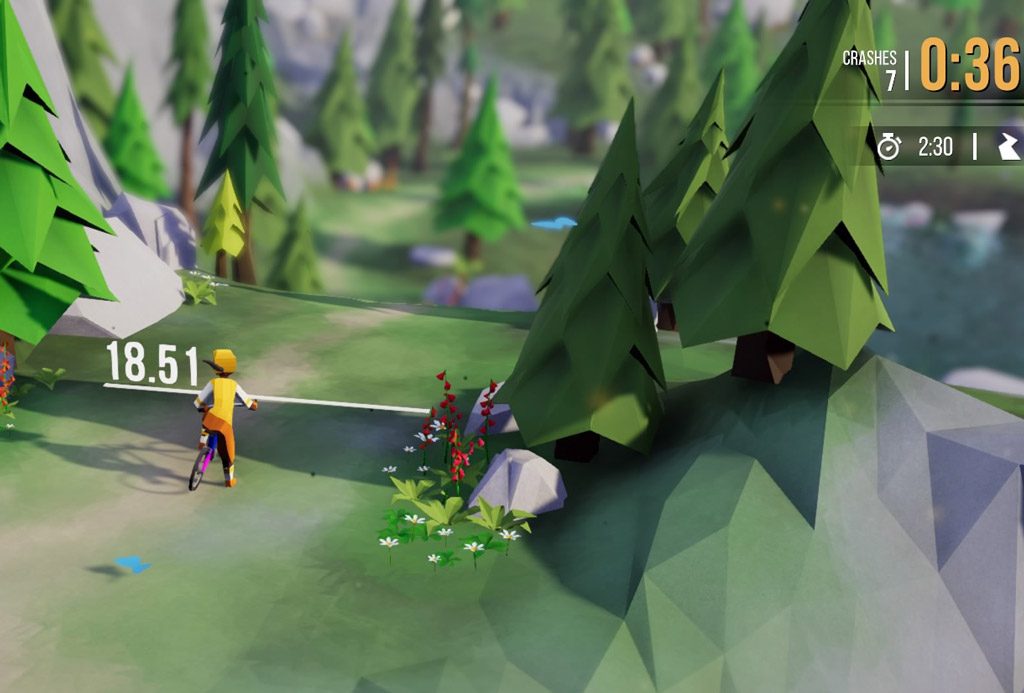 Standing alone atop the mountain, primed like a disgruntled pensioner in a long queue, the faceless cyclist gazes down at the winding killer which awaits. Only the sweet chirping of the crows, and the rustling of the cyclists’ incontinence pants will crack the sheet of glacial silence enveloping the ruggedly beautiful crag. Nervously grasping the horns of the metal steed, the faceless one launches into the quietude, aware that one wrong move will spell calamity. And yet another unwanted return to the last checkpoint…

A Mountain Out Of A Molehill

As to be expected from a publisher working on a small budget, Lonely Mountains: Downhill has arrived with minimal fanfare, but with a smattering of awards and financial backing from a large contingent of gamers via Kickstarter.

The first thing that strikes you is the beautiful simplicity of the game. R2 to pedal, L2 to brake, X to sprint in small bursts, and the left analogue stick to steer left and right and that’s it. Unlike the obvious comparison Trials, instead of controlling the lean of your rider, you steer in 3D through the courses. Otherwise there’s little similarity between the two games other than the number of wheels you’re using.

There’s a lovely old-school feel to the gameplay and it’s not just down the low-polygon graphics; more to do with the purity of simply weaving your lone rider down some truly difficult trails against the clock.

One tracking camera follows your cyclist down the mountain so all you need to concentrate on is steering and your speed. The bird’s eye camera generally does its best to follow your cyclist but without too much of a view of what’s coming up ahead, you need your wits about you to avoid being flung into the abyss. On later levels, a few ravines and tall trees end up obscuring your cyclist completely which can make life unnecessarily difficult and the odd frame-rate drop can ruin a clean run, but otherwise it’s pretty good.

The main crux of the game is to make it from the top to the bottom of one of sixteen trails across four mountains as quickly as possible. The clearly delineated routes are not always the quickest way down, so in order to beat the ‘expert’ challenges, you’ll need to get creative off-piste. More trails and mountains become available as you complete the time limited challenges and also making it down to the finish without crashing too many times reaps rewards.

As well as numerous rider outfits and bike paint jobs, there are also 5 other bicycles to unlock, each with various strengths which enable you to off-road more safely, reach higher speeds and turn down wiggly trails more steadily.

The learning curve is appropriately steep, and the scenery is brutally unforgiving: slightly clipping a tree, a rock or failure to land completely straight all result in a bone-crunching rag-doll demise, complete with cartoon pixellated blood. Each trail has six checkpoints, and as you might expect, you are immediately whisked back to the last one after a crash.

Despite the sometimes cruel difficulty, exacerbated mainly by a lack of foresight, it’s hard to refuse another go, even as your hackles start to rise after the umpteenth crushing mistake.

The addictive qualities are the sum of the graphical elegance, the serene soundscape, and the snappy checkpoints which are generally around the 20 second mark. Some of the tougher stretches where the checkpoints are further apart is when Lonely Mountains: Downhill begins to test the patience of the player.

Repeatedly riding down the same stretch for 30 seconds only to be launched off a cliff just before the next checkpoint becomes very tiresome after the tenth attempt. Having said that, there’s an element of magic within the gameplay that ensures you rinse and repeat until you’ve beaten the bloody section, and there will be plenty of blood.

Visually, Lonely Mountain: Downhill is mana for the eyeballs – refreshingly bright and colourful with hints of ‘Miniature faking‘ through some judicious use of camera focus, and the scenery textures and lighting is simplistic but brilliant.

The audio is striking, primarily because there’s very little except the sound of nature around you, overlaid with your tyres on the trail and a pleasant bing as you pass each checkpoint.

If You Can’t Ride Two Bikes At Once, You Shouldn’t Be In The Circus

On the downside, there’s not a massive amount of variety across the different trails and a multiplayer ‘race to the bottom’ would have been a welcome addition to the leaderboards. Also, the occasionally obscured camera, frame drops and restricted foresightedness knock off a few brownie points, but these can all be lived with and will be perhaps fixed in a future patch.

Overall, there’s a whole lot of game here and an unassuming quality within the presentation which gives the player a feeling of discovery and satisfaction throughout. As well as numerous ways to traverse the mountains, there are four rest areas to discover on each trail and a whole heap of tough but enjoyable trophies to aim for. Online leaderboards will spur you on to find that extra split second to become the king of the hill when you replay the trails, and to unlock all the extras, you’ll need to muster some superhuman skills.

If you like a challenge to your reflexes and have the necessary patience to learn the trails, you’ll be rewarded with some truly exhilarating and satisfying gameplay.

Lonely Mountains: Downhill releases on PS4, PC and Xbox One on October 23rd 2019

A serene and pretty aesthetic sits atop a brutal but satisfying arcade downhill bike game which wears its retro stylings and simplicity with pride. A fine game for all and not just for MAMILS!