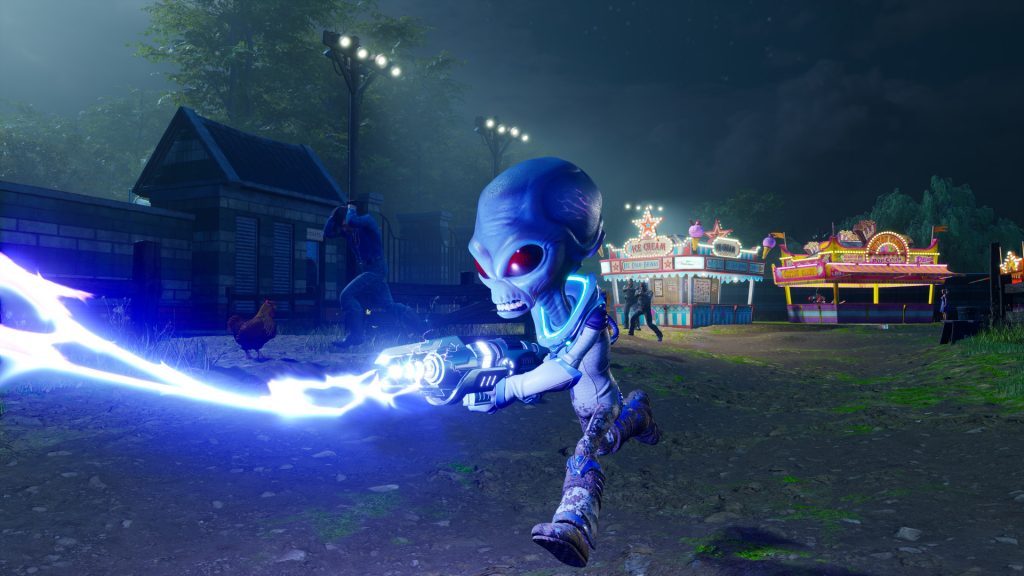 Destroy All Humans! PS4 Review – I never made it very far into the original Destroy All Humans! when it first released on PS2. I remember being excited to play the game, having read extensive coverage about it in the gaming press of the day. But when I finally bought Destroy All Humans!, I was in the midst of wandering around Grand Theft Auto San Andreas (I bought all my games used in those days, years after they released). Nothing was going to be able to pull me away from the adventures of CJ for more than a couple of hours. I made it to about the fourth level, then bailed.

But jumping back into the 1950s world of Crypto and his campaign to decimate the human race, I can see why this game gained such a cult following when it released back in 2005 (indeed, I eventually bought almost every sequel, and spent much more time with them than the original). While the remake has not erased any of the flaws of the original game, the sense of fun that comes from bursting the brains out of heads of countless military stooges comes shining though.

Remarkably Faithful To The Original

Before diving into the original game, lets get the remake stuff out of the way. Much like the recent Spongebob Squarepants: Battle for Bikini Bottom Rehydrated, this is a very faithful remake, and while a bit of “lost” content has been added back into the game, only super-fans are likely to notice within the flow of the game. Everything looks, feels, and behaves exactly as I remember it – only much, much crisper.

As a hoarder of games, I still own my original copy of Destroy All Humans! (Nothing shall be sold! Nothing shall be thrown away!). I popped my old disk into my PS2 on the 36” tube TV I keep around for older systems and played through a level or two of the original for comparison.

The remake of Destroy All Humans! looks fantastic, as though a sheen of gauze that had been obscuring the original game has been removed to reveal the shining gem underneath. Tiny details that couldn’t be discerned in standard definition are now front and center. Objects in display windows. Cracks in the sidewalk. Ornamentation on military uniforms. You can see it all.

Remaking a game of this nature must be a bit more intimidating that remaking something like a platformer. Semi-open worlds offer a lot more room for things to go horribly awry than running a character along a linear path.

There’s an element of randomness at play in Destroy All Humans!. Indeed, part of the fun is running around the game’s mini-open worlds and causing complete chaos. The new version of the game must be capable of duplicating that mayhem, without overstepping the parameters of what was available in the original. I am 100% certain that the devs at Black Forest Games were quite capable of adding more enemies, ratcheting up the explosions, and recording new voice lines. But the mechanics and elements in the Destroy All Humans! remake are exactly as you might remember them – they just look a heck of a lot better.

In the same vein, the human characters could have looked a lot less cartoon-ish and stiff this time around – but they don’t. THQ Nordic seems to take a very hard stance against meddling with the original games they are remaking. Improve the visuals, update the controls, but do not mess with the mechanics. Make sure it behaves and feels the way people remember. Use the original voice recordings if possible. These feel like the correct choices to me.

Crypto Is An Absolute Brute

For those not familiar with the original games, they revolve around a foul-mouthed alien named Crypto who comes to Earth on a mission to harvest DNA from the human population. Crypto’s predecessor on this mission crashed near Roswell, and his body and ship were both recovered by the US military. This insulting turn of events has Crypto in a foul mood, and he is ready to take it out on any humans he comes across.

It turns out that Crypto originates from a society of clones. In an effort to stave off extinction resulting from the degradation of their DNA, they implanted their genetic material into the human race millennia ago. Now, the time has come for them to harvest humans for survival, and there is very little in the way of pity or remorse shown as they cheerfully go about this grim task. Crypto arrives with a job to do, and he’s going to enjoy doing it.

To say that Crypto has no regard for human life is an understatement. I must have killed at least 20 or 30,000 humans over the course of my playthrough. Most of those were during grind sessions – spending hours knocking out endless waves of aggressive army guys – but to be honest, I would pop innocent passersby just for fun sometimes.

Crypto moves from rural America through more affluent cities, before finally arriving in Washington DC in his comic attempts to take over and destroy human society. Along the way, he causes any manner of ruckus, from hypnotizing the populace at a drive-in movie theater to nuking a military base. All of this is done with a Jack Nicholson wisecrack and sneer, and it all works swimmingly.

There’s No Getting Around 2005 Game Design

For example, there are only so many enemies allowed on the screen at a time – and even in the midst of the harshest battles, they sometimes simply lose interest (or track of you) and wander away. Burnt husks of vehicles you have destroyed vanish when you turn away and then turn back. Dead bodies on the ground have an even shorter shelf life. This is a game designed for systems with far less horsepower then today’s consoles, and it shows.

Other early century issues are apparent. In order to fully upgrade Crypto’s weaponry (basically his skill tree), a great deal of grinding is needed. Crypto’s store relies on him harvesting DNA from his human victims, and only a few of his weapons are capable of that task. The others simply disintegrate their targets, which is useless for the grind. This leaves players using the same two powers for the hours spend grinding, which gets a little tedious.

I would be remiss if I didn’t also mention that this game is full of culturally insensitive language. The game is lampooning 1950’s America, and there is a warning/disclaimer at the beginning of the game. But still, get ready for a few tasteless jokes about sexual orientation, gender identity, and certain disabilities. It’s not a deal-breaker considering the context, but players should still be aware.

And of course, there is the matter of those last couple of boss fights. Nothing in the game prepares players for the ludicrous challenges they will have to overcome to beat the game. In fact, the majority of Destroy All Humans is an amusing cakewalk. Don’t get too comfy – easy street comes to a crashing halt as the end of the game. Get ready to swear a lot.

And yet, even with these design limitations, Destroy All Humans! is a ton of fun. Players experiencing this game for the first time are in for a treat – ridiculous difficulty spikes and all. Crypto’s mission into mid-20th century American life is cutting and hysterical. And causing an endless chain of brain-popping in a crowd of army dudes is endlessly entertaining.

If all of THQ Nordic’s remakes are going to be as good as Destroy all Humans! and the recent Spongebob Squarepants: Battle for Bikini Bottom, I have a pretty long list of titles I would like to add to their already impressive list. I never thought I would say this, but playing the Destroy All Humans! remake really has me jonesing for a new game in the franchise. THQ Nordic can’t be prepping new games in all of these franchises, can it? I mean, the company is already a ridiculously prolific publisher. Is there room in there for some new adventures for Crypto?

Either way, I hope that THQ Nordic continues down this path of remaking older games and selling them for thirty bucks. The price is right, the nostalgia is rich, and the backlog is ripe for the picking. Keep making them, folks, and I’ll keep buying them.

Destroy All Humans is available Tuesday, July 28 on the PlayStation Store.

With a strict adherence to the style and performance of the original game, Destroy All Humans! brings all the fun of 2005 (and the frustrations) of the original. This is a game that was fun 15 years ago, and that fun still holds up, only now it has a shiny new coat of paint. Though some cultural references are a bit wince-worthy and there are some ridiculous difficulty spikes, in general Destroy All Humans! is a rollicking good time.