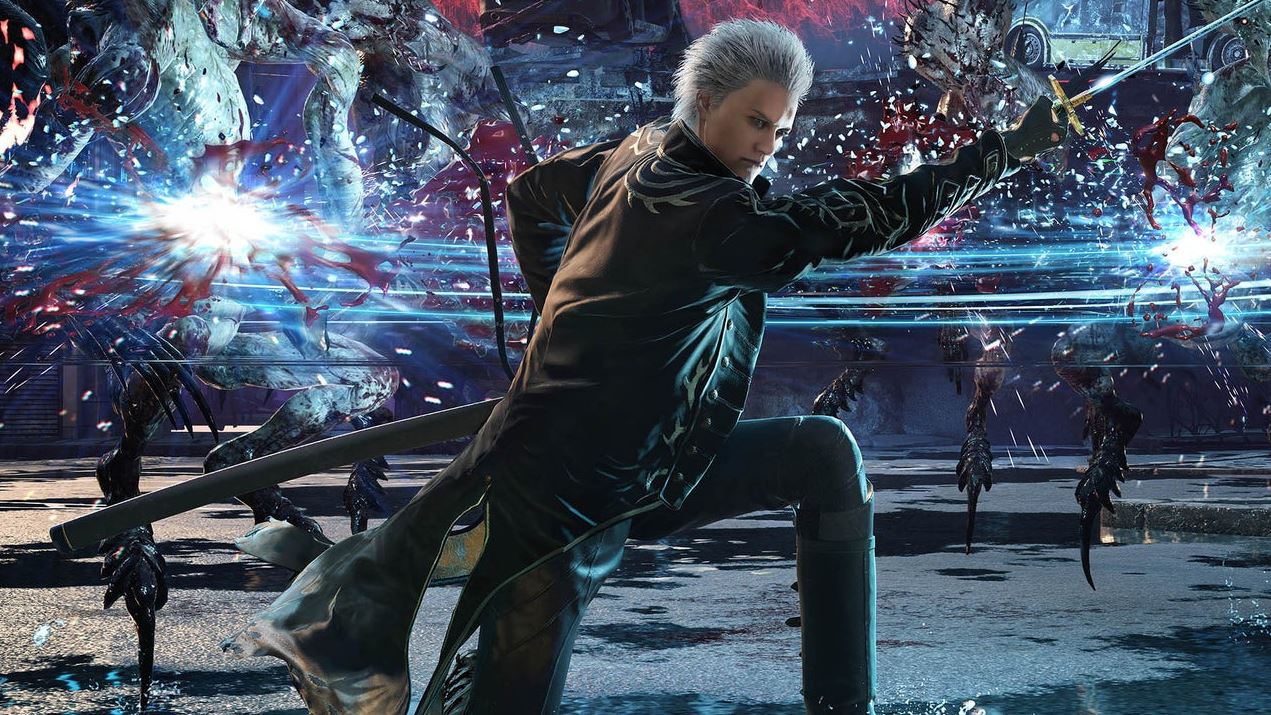 For the uninitiated Devil May Cry 5 represents Capcom’s latest instalment in its third-person hack and slash franchise. Something of a decidedly all-star affair, Devil May Cry 5: Special Edition brings together long-time series protagonist Dante and pairs him up with new boy Nero from Devil May Cry 4 and in this release only, recurring cool/bad dude Vergil.

I won’t go into massive detail on the mechanics that are encompassed by Devil May Cry 5: Special Edition (you can read our full Devil May Cry 4 PS4 review for that), but I will say that Capcom’s fifth core entry in its long running franchise is superlative; beautifully combining the series penchant for deep, stylish combat and spectacle infused swagger to make it one of the best action games in recent years.

And this is the thing, though the super cool action sequences and cocky charm of Devil May Cry 5’s cast of likeable protagonists has been something of a staple for the series since its inception back in 2001, it’s really the combat that Devil May Cry 5 trades on so effectively which makes it as good as it is. With the franchise’s combo grading system returning to the fore, Devil May Cry 5 very much rewards players who meld muscle reflexes and violent creativity in equal parts as they fight off the demonic invasion of Red Grave City.

In practice, this not only involves embracing Devil May Cry’s twinned guns and swords approach that has for the longest time been one of its most compelling features, but also leveraging the new Devil Breaker mechanical arms that main protagonist Nero can use to unleash devastation upon his opponents. Simply put, combat in Devil May Cry 5 both feels and looks great, so fans of third person hack and slash shenanigans will find much to love here indeed.

More than just being stuffed with a bunch of DLC, by far the biggest addition that Devil May Cry 5: Special Edition brings to the table from a content perspective is that it allows players to take control of Vergil and take him through the story missions or the Void side missions. Elsewhere, the addition of a new turbo mode ratchets up the speed of proceedings, making Devil May Cry 5’s combat play out at breakneck pace and providing a nice diversion from the regular speed of its murderous encounters.

Playing Devil May Cry 5: Special Edition In 120 FPS Is A Revelation

With its PS5 release, it should come as little surprise that Devil May Cry 5: Special Edition boasts a whole range of greatly welcomed technical improvements, all of which help to make Capcom’s latest entry in the Devil May Cry series to feel like a truly contemporary effort. Chief among these improvements is the generous coat of next-generation paint that has been applied to the visuals.

Permitting players access to a variety of graphics modes, Devil May Cry 5: Special Edition allows players to play in a either a resolution mode that hits 4K with ray tracing at an uncapped frame rate. A performance focused mode that allows limited ray tracing at 1080p but which rigidly sticks to 60 FPS or finally, a high framerate mode which strips back enhanced visual effects, ray tracing and the resolution to 1080p in return for blisteringly fast 120 FPS play.

Arguably the largest single addition that Devil May Cry 5: Special Edition brings over the vanilla version of the game seen on PlayStation 4 and Xbox One, playing Devil May Cry 5 at 120 FPS is quite something indeed.

For those of you lucky enough to have a HDMI 2.1 compliant display to pair up with your PlayStation 5 console, playing Devil May Cry 5: Special Edition in 120 FPS mode is quite simply the best way to do so. While the on-screen super smooth animation is one thing, it really is the level of ultra-responsiveness which this mode affords that helps to cement it as the best way to play the game.

With the 120 FPS mode turned on, every dodge and attack feels instantaneous – almost as if the latency which exists between you, the DualSense controller the game itself is now imperceptible. It’s that intangible lack of delay between player commands and the game carrying out those instructions that feels especially crucial in Devil May Cry 5: Special Edition and the fact remains that Capcom’s high octane, over the top hack and slash battler is a perfect early demonstration of the benefits that 120 FPS gaming can provide.

Another benefit of Devil May Cry 5’s leap to PlayStation 5 are the loading times – or the lack thereof. Getting into the game from a cold boot state in just over twenty seconds, with a game load taking just over seven, the PS5 allows wannabe demon hunters to get into the action with little delay. It’s amazing, in retrospect, how such lengthy load times were tolerated – but presumably that’s what mobile phones were for I guess.

Sadly, there’s not much to talk about in the way of a DualSense implementation for Devil May Cry 5. There’s a low thrum which emanates from the centre of the controller when you’re slashing through demons or piling lead to enemies, but that’s pretty much it in regards to the controller’s haptic feedback functionality. Elsewhere, the adaptive triggers aren’t really used either – but they are given a spotlight of sorts when pressing down the L2 trigger revs up Nero’s Red Queen sword; though the feeling is more akin to having a bunch of angry wasps locked in the controller moreso than anything else.

Brimming with style, ageless combat and stunning visuals, Devil May Cry 5: Special Edition represents a superlative package available at a budget price that brilliantly embellishes one of the better hack and slash efforts of the last few years. Sure enough, those players who have already long plumbed the depths of Capcom’s latest entry in the Devil May Cry franchise may struggle to justify the double dip, but for the rest of us – newbies and lapsed Devil May Cry players alike, Devil May Cry 5: Special Edition represents an irresistible value proposition which redefines Capcom’s superb actioner in its ultimate form.

Devil May Cry 5: Special Edition releases for PlayStation 5 on November 12, 2020. A physical version of the game will be available on December 1, 2020.