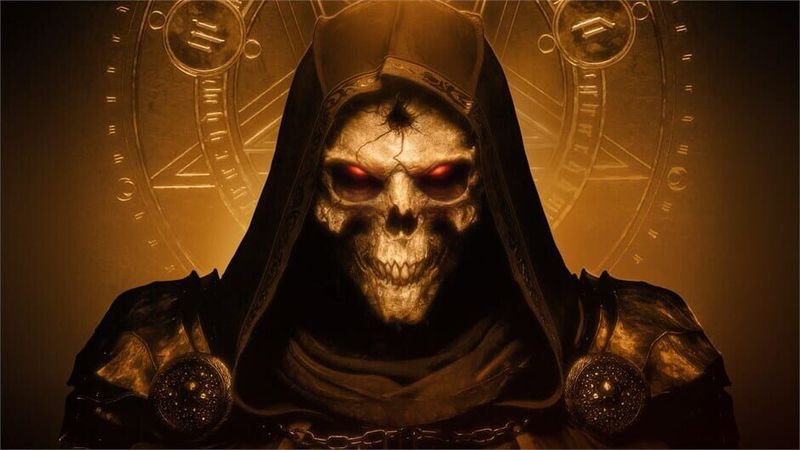 Diablo 2: Resurrected Review (PS5) – One of Blizzard fans most treasured games, Diablo 2, is alive once again. With all the visual polish of a modern game, Diablo 2: Resurrected shines satanically on a 4K screen. Concerned fans returning from the open beta will be happy to know that the general presentation has been improved.

This Vicarious Visions makeover alone will be enough for Diablo faithful’s to dive back into this gothic nightmare. The question is: does the rest of the almost completely unchanged Diablo 2: Resurrected hold up for a new audience?

There’s no question that Diablo 2 was a big innovator in its day, but perhaps those long cherished components are feeling a little antiquated in 2021.

The crowning achievement of this remaster is how well it has managed to bring the world of Sanctuary alive. Despite adding a whole new dimension, completely recreating all the characters and environment, and firing all of that in front of your eyes at a drastically higher resolution, everything feels exactly how you might remember it.

Whereas the open-beta was looking a little soft on the resolution side, the full release of Diablo 2: Resurrected has the potential for full and glorious 4K. Considering the camera viewpoint, you can actually notice this bump up on all the small little details. Grass and character edges are noticeably more defined than the open-beta. 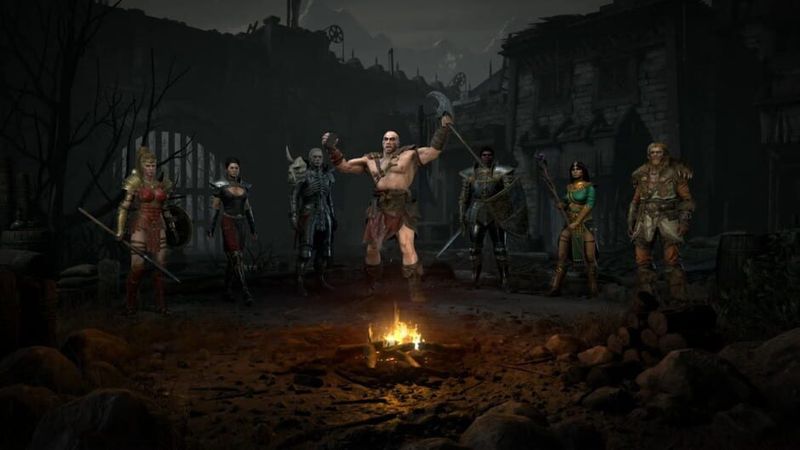 The reworked character models look like they were always meant to be there. It’s almost as if the incredibly pixelated sprites that used to haunt our screens in original, were in fact just censorious blurs for the finished project we have now.

Perhaps what’s really prodding the nostalgia bone is the sound design of Resurrected. The original soundtrack and SFX are still greatly intact. The improved quality over the original is clearly audible, and yet somehow feels exactly the same.

From every area music, right down to the grunts and howls are immaculately consistent with the original experience. No doubt this will all be the stuff of long time fans dreams, but it is another question entirely in regards to whether a new fan can become immersed in this world.

Objectively, Diablo 2 : Resurrected looks good, but not remarkably so. The art-style more or less just mimics the original in a more realistic way. You could perhaps say the graphical realism is of a decent standard by modern times. Although, the isometric nature does look a little crude next to recent AAA games. In any case, it won’t be blowing any younger minds.

On the face of it, Diablo 2 : Resurrected is essentially an old point and click game repurposed for a console controller. Where you used to move a cursor, you now aim the analog stick before selecting a hot-keyed action. It works well enough, but it isn’t anymore riveting than it sounds.

In the case of attacking an enemy, it would feel barely interactive if not for the SFX and rumble. Diablo 2 players will remember that misses are frequent. Sometimes you can find yourself holding attack down endlessly, only to be swatting the air around a barely mobile zombie. It can feel like someone gave your Barbarian an inflatable club as a joke. 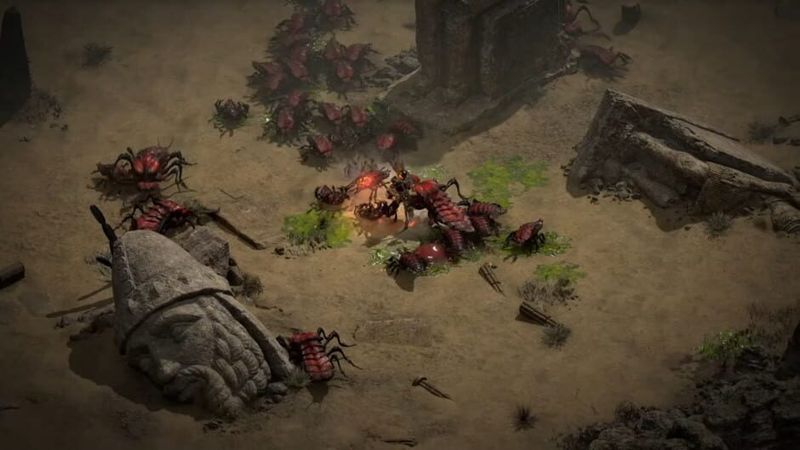 Of course, this is just symptomatic of Resurrected’s one and true purpose: to recreate Diablo 2 (warts and all). Every awkward and clunky element of the 2000 game has made its way back in. As a result, the general interactivity in combat is showing it’s wrinkles .

However, it wasn’t the point and click style that made Diablo 2 such a revelation. Blizzard’s classic innovated a very deep system of character development, strategy and loot system. Despite now being more standard amongst RPGs of the last two decades or so since, it’s not a stretch to say this part actually holds up.

With every character option comes a diverse array of options to specialize. Finding a tailored build to suit you is not only key to mastering higher difficulties, but offers tons of replay value on an already repeatable campaign. 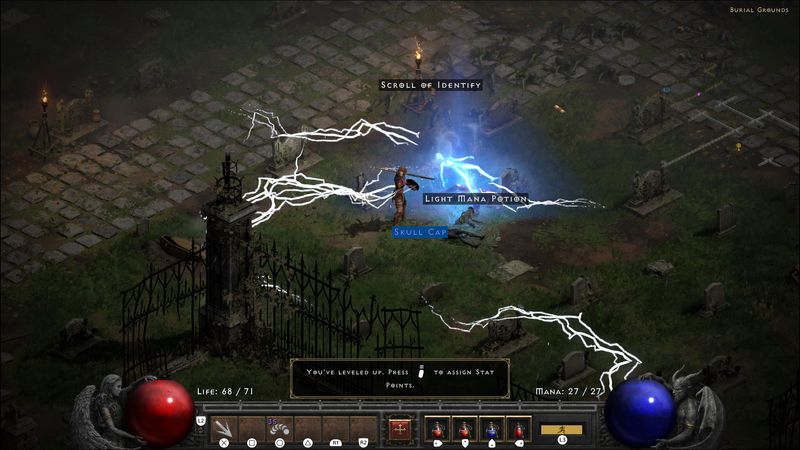 Better yet, with online play you can team up and use your characters to even greater effect. Moreover, this is the peak of the Resurrected experience. Having a javelin throwing Amazon pick off enemies from afar, whilst a defence specialized Paladin tanks damage and casts buffs for the team, is just one of many great combinations that can bring team mates satisfaction.

Multiplayer aside, Resurrected is still fun going it alone, but hardly the same thrill. Additionally, just like the original Diablo 2, the game seems to favour ranged character builds. As a result, playing a lone melee based character, such as a typical Barbarian, can be a bit of a slog on your own.

While there are a few improvements to the game, such as automatic gold pick up and the ability to trade items directly between players, there is still one big glaring omission. Local co-op could have been everything. It’s difficult to say whether this would have been a practical inclusion, but veritably the most welcome.

Another challenge Resurrected has is commanding any attention with its story. However, this is not directly a result of Diablo 2’s age, but with its predecessors age. Diablo 2’s plot is implicitly built on the back of Diablo 1.

Legacy players will be ecstatic to see the remade cutscenes delivering a whole new level of realism to the dark wanderer, the following Marius, and the returning titular demon himself. However, the significance of these characters is tied to a quarter-of-a-century old game.

New Diablo challengers will have to sit through the story in bewilderment if they don’t fancy reading up on the lore. For what it’s worth, whilst not being award winning writing, this old gothic horror tale does hold up as an engaging narrative gluing the parts together. 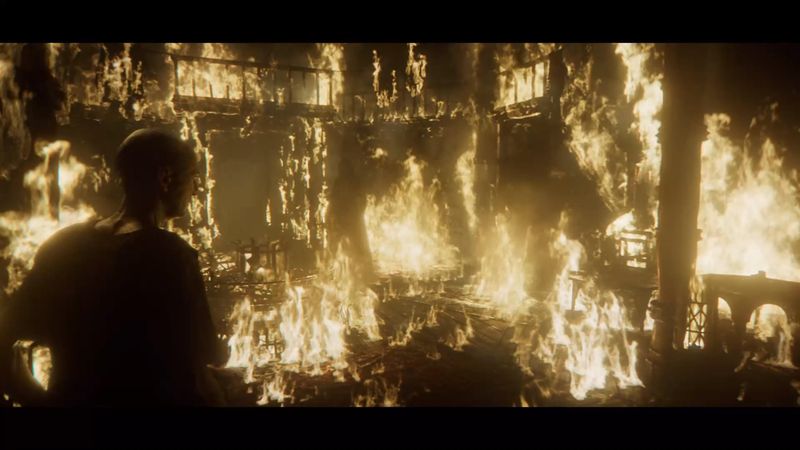 Resurrected includes the full Diablo 2 expansion. Consequently, there are 5 Acts to repeatedly brawl through, and it’s still as massive of a time-sink as it ever was. While a lot of that time is a multiple playthrough carrot-on-a stick chasing grind for better stats and loot, there’s still an unfortunate amount of joyless orderliness required.

Put specifically, the inventory management of the game is mind numbing. Juggling your items is a nuisance in any RPG, but Diablo 2’s takes the cake. Loot is everywhere, and constant decision making with it.

Eventually you learn not to hoover up every trinket that drops ( and they drop extremely frequently ). However, even with priorities set in place, it’s very difficult to not get trapped in the loop of comparing your pieces every few minutes or so. 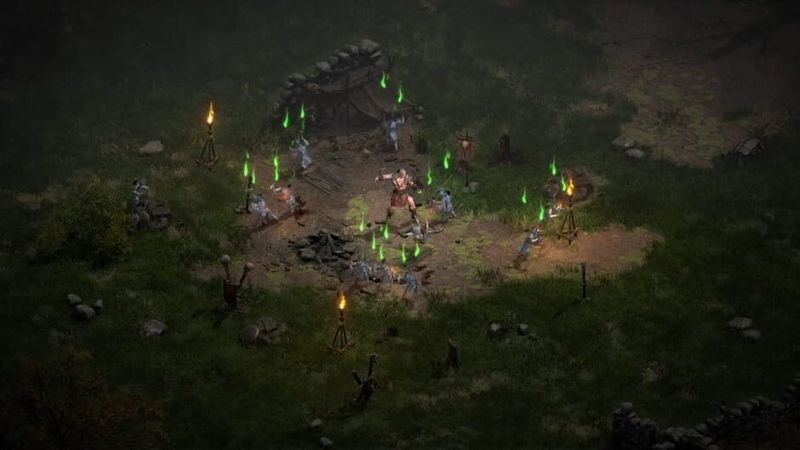 Worse yet, there’s no pause. So whilst you’re deep in your hoarding problems, you might be frustrated to find yourself slain. Furthermore, in a roguelike fashion, your position is reset, as are all the enemies and the precious loot you couldn’t sort will be laid next to your corpse. Life is cruel.

Diablo 2: Resurrected is certainly doing about all it can to be a purist’s dream. Every ounce of the core experience is preserved, but with some nice quality of life improvements. Most notably, a smooth 1440p 60fps and a sharp 4K 30FPS mode!

However, the modernization largely stops at the facelift. Resurrected inherited the code of a notably clunky old game, and there’s no getting around that. In many ways, this is simply a restorative tribute to a classic game for the fans, and few else.

Diablo 2: Resurrected still has something to offer. Played best with friends, you’re in for a deeply mathematical ARPG experience that can really bring a team together. The problem is that there are now a fair few better alternatives that fulfil that gaming need.

Diablo 2: Resurrected is available on PS5 and PS4.

Certianly it's great to see an all time classic enshrined and restored for modern day use. Additionally it opens up the game to exclusively console players that never played the original Diablo 2 on PC. There's no denying its significance in gaming history, and looks wonderfully sharp in 4k, but the age of the source code is evident. Diablo faithfuls will get a great nostalgic kick on the clunky ever-grind that is Diablo 2: Resurrected, but it would be a difficult recommendation for any series newcomers.