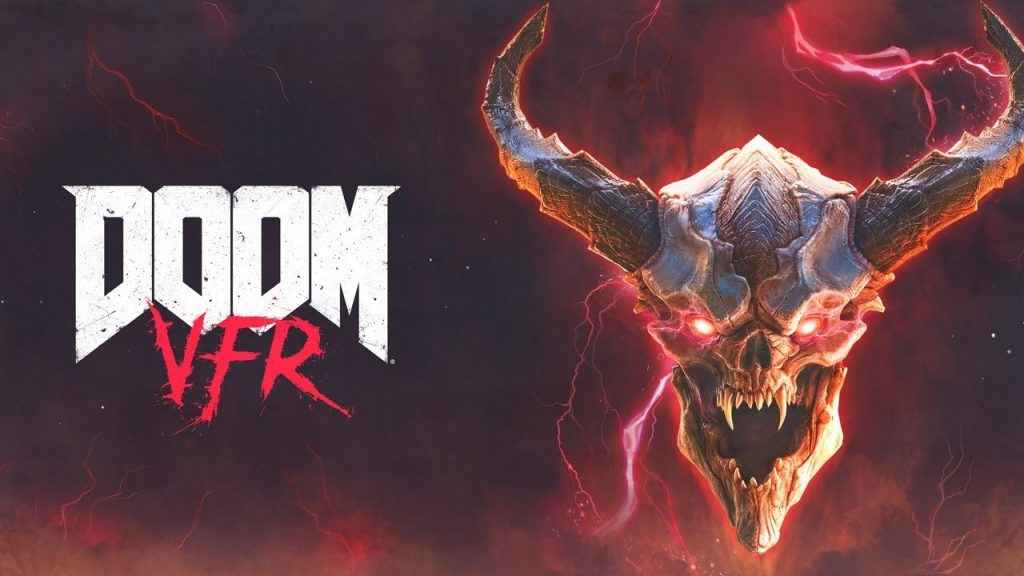 DOOM VFR feels like DOOM. Perhaps given the calibre of last year’s DOOM, that is the highest form of praise that one can lavish upon this PSVR spin-off, and yet, though the game seemingly enshrines the maturation of Sony’s VR platform on its first birthday, such platitudes come with numerous caveats.

DOOM VFR is one of the best looking games on PSVR

Straight off the bat the first thing you notice about DOOM VFR is just how good everything looks. As PSVR owners, we’ve long had it drummed into our collective skulls that the PS4 hardware just isn’t up to snuff when it comes to rendering decent VR visuals, well, DOOM VFR is here to plant its size 23 boot in the bumhole of that particular argument.

Simply put and without a degree of exaggeration, DOOM VFR looks fantastic on PSVR. More than just a painfully reductive, visual facsimile of the full-fat PS4 experience (sorry Nintendo Switch owners), DOOM VFR instead does a grand job of bringing the satanic sci-fi environments and splattered gore of last year’s DOOM kicking and screaming onto PSVR, albeit with a modest hit to visual quality. So let’s be clear here; DOOM VFR is the singularly most visually impressive PSVR title on the market right now, and for that feat alone the developer deserves immense props.

Extending beyond DOOM VFR’s visual accomplishments, it’s fair to say that the PSVR title also deeply resembles its non-VR source material on many other levels too, as many of the same weapons, monsters and level designs have made the leap from last year’s DOOM to its contemporary PSVR counterpart. More crucially though, DOOM VFR feels like DOOM, as that title’s penchant for frenetic, arena-based violence against a veritable tsunami of demonic beasties is one that has been excellently replicated here for the most part.

DOOM VFR feels like DOOM but brings some tweaks

Where things are a little different in DOOM VFR is in how the glory kills are handled. Previously, whenever a foe was vulnerable enough, players could activate an execution style attack (the aforementioned glory kills) which would not only finish them off in a gruesome fashion, but also provide a number of health and ammo pick-ups as a reward, too.

Here however, when enemies are vulnerable, players can teleport into the same space as their weakened foe and effectively telefrag them; exploding them into big gloopy pieces with the same ammo and health rewards being doled out as a result. Though the new telefrag finishing moves certainly don’t lack visceral spectacle, I have to say that I prefer the glory kills of old, simply because there was more variety and they felt much more satisfying to pull off.

Not just used for gory telefrags, teleportation is utilised widely throughout the duration of the game and stands as one of the real major changes between DOOM VFR and its non-VR counterpart. In addition to replacing the glory kill system, DOOM VFR’s teleportation system also allows players to warp quickly around the game’s levels, all the while providing a tangible slow-motion effect that comes into force whenever you activate the ability.

Given the lack of any kind of jump command in DOOM VFR, the addition of something like this benefits the hyperkinetic brand of furious combat that is arguably the cornerstone of the DOOM experience. Indeed, you’ll soon find yourself warping and blasting across DOOM VFR’s familiar arena based encounters, emptying machine gun rounds, buckshot and rockets into the many faces of the demonic horde with gleeful aplomb.

Further changing things up is the narrative that DOOM VFR weaves. Effectively a side-story to the events chronicled in 2016’s DOOM, DOOM VFR has players filling the shoes of a lab worker who, after getting halfway eviscerated by a charging demon in the game’s opening moments, must rebuild his body and find a way to escape the overrun installation that served as the setting for last year’s game.

Largely however, this new narrative ends up feeling disappointingly inconsequential in many ways. You see, not only does the constant narration by the protagonist feel jarringly at odds with the exposition-less ultraviolence that is so synonymous with DOOM, but the developers have, for whatever reason, seen fit to shoehorn a bunch of pointlessly simplistic and challenge bereft reflex based ‘puzzles’ that add absolutely nothing to the experience. DOOM should, literally, be about killing stuff and nothing else.

Another issue with this new narrative is that much of it unfolds in the installation that we already saw in last year’s game. Now, while this is encouraging in one respect as it ensures that DOOM VFR bares a very strong resemblance to 2016’s DOOM, it also means that many of the re-used assets will prove overly familiar for those who have already plumbed the depths of id Software’s tremendous shooter a year or so ago. Furthermore, those who are expecting a full-length title will be disappointed; DOOM VFR can be comprehensively completed in just a few hours, though in all fairness, the $30 or lower price arguably justifies its relatively meagre offering.

There is no one perfect way to control DOOM VFR

A common concern whenever a first-person adventure or shooter title lands on PSVR is whether the control system is up to snuff, and in the case of DOOM VFR, it’s a concern that isn’t very easily addressed. From the top, DOOM VFR supports the entire gamut of controller possibilities for PSVR which includes dual Move Controllers, PS Aim and finally the regular old Dual Shock 4 controller, with each one providing markedly different results.

Faring the worst of all the control methods you can choose from are the Move Controllers. Here, as in other efforts of a similar ilk, each Move Controller corresponds to a different hand on-screen, allowing you to create organic gestures with whatever weapons you have in your hands at the time. The game-breaking problem with this control system is that you cannot turn properly, as the game only supports a 180-degree quick turn, and not any of the 30 or 45 degree incremental turns that other similar games thoughtfully include. The upshot of this, sadly, is that DOOM VFR is basically unplayable with the Move Controllers at present, because the breakneck pace of DOOM VFR’s many violent encounters means that you need to be able to turn on a penny at any given time to address all the threats that surround you; something that you just can’t do right now.

Next up is the PS Aim controller which, somewhat thankfully, fares much better than its PlayStation Move counterpart. In addition to making the aiming of DOOM VFR’s numerous demon-destroying firearms feel satisfying, the directional controller that the PS Aim has also remedies the movement issues that the PlayStation Move controllers ran into as players can elect to turn in 30 and 45 degree increments, or, enable full-on smooth movement depending on their preference. All the same, using the PS Aim in DOOM VFR is not a flaw-free experience, as using the controller leaves one of your virtual hands just floating in space like some sort of ghastly apparition and as such, directly impacts on the engagement of the experience.

In the end, it’s actually the humble Dual Shock 4 controller that comes the closest to replicating the vanilla DOOM experience in PSVR. Largely, this is because it properly leverages both head-tracking and the left analogue stick to allow players to perform pin-point feats of demon blasting at a moments notice; something that you’ll need to triumph in DOOM VFR’s later, demon-filled sections. That said, to use this control system effectively with the smooth movement mode turned on for the best results, it demands that players have found their ‘VR legs’, lest their most recent meal decides to make a reappearance on their laps. As such, DOOM VFR can only really be recommended to folks who have been used to VR for a good while, rather than newcomers whose penchant for motion sickness remains untested.

DOOM VFR is far from perfect then; between its haphazard array of control systems, re-used assets and morsel-sized length, there is clearly a fair amount of stuff here that stands to be improved.

All the same however, DOOM VFR ostensibly nails the beating black heart of what makes DOOM so thrillingly enjoyable in the first place to a great degree, and stands, at this point at least, as a budget priced tease of what a full-blooded, full-fat PSVR take on DOOM could look like.

Did you enjoy this DOOM VFR review? For more details on the game, check out the official hub for DOOM VFR.

Despite its scattershot approach to control and bite-sized scope, DOOM VFR provides a tantalizing, gore-soaked and adrenaline filled peek at the future of PSVR.