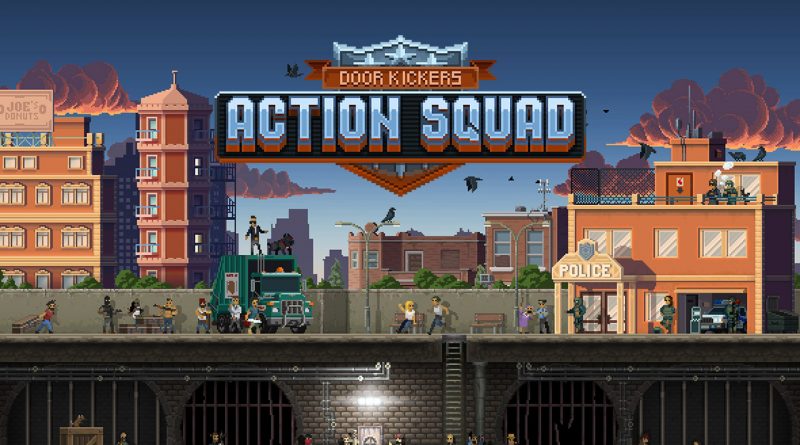 There’s something to be said for briskly paced, conceptually lean shooters that allow you to dip in and out without the requirement to place unnecessarily grandiose demands on your time. Door Kickers: Action Squad is one such effort, sticking players in the well-treaded boots of a tactical team operative who must clear each level, either by killing all the goons present, rescuing all the kidnapped hostages or sometimes a combination of both.

Action Squad’s pursuit of simplicity is blissfully evident in every aspect of its design. From the basic, easy to use controls to the streamlined concept and the fact that each level can be completed in anywhere between five and ten minutes, Action Squad is a title that is perfectly suited to casual bursts of pick up and play. That said, there is a surprisingly amount of depth present underneath its seemingly trite facade.

For a start, death can come extremely quickly, meaning that each room must be tackled with some degree of forethought. Kicking open a door will, for example, momentarily disorientate whomever is standing behind it, allowing you a precious second or two to dispatch them in quick fashion. However, things become a little more tricky when you encounter stronger doors that require multiple kicks to get down – the noise of which naturally alerts any enemies who might be lurking on the other side, making a breach much more challenging as a result.

Additionally, Action Squad encourages you to find the most efficient way through each of its levels, often presenting the player with a small handful of different ways to tackle them. Annoyingly, there is typically one way to go through each of its levels that’s clearly superior to the rest in that it results in you taking the least amount of damage, making the other paths feel a touch redundant as a result.

Elsewhere, because the criminals tend to lurk uncomfortably close to the hostages, shots must be taken with precision in order to get the job done. Simply going fully automatic by spraying and praying will almost certainly murder everything in the room, including any hostages which might be lurking about – resulting in a reduction in health for each hostage wasted, and the loss of resupply opportunities.

This is where the ‘aimed shot’ mechanic comes in. Most of the firearms that you’ll have access to will allow you to take one, super damaging aimed shot that will wipe out a single foe. However, because there is a cooldown associated with using the ability, you need to prioritize how and when you use it alongside regular fire in order to ensure that you don’t provide the enemy with any time to react. This neatly dovetails into the creative freedom that the game permits for engineering success in such situations, allowing players frugal use of flash-bangs, grenades and other such gadgets to get the job done.

The base concept also gets expanded in fairly interesting ways too. For instance, wounded policemen can be enlisted to support you, covering entrances and guarding corridors, while some particularly enterprising criminals might use a hostage as a human shield, forcing you to get creative in order to save them. Likewise, some doors will require keycards and other such items to progress, while other levels will take place in much more dynamic locations – such as a moving train for example.

In reference to the previously mentioned resupply opportunities, whisking hostages away from their captors and blasting thugs also brings resupply points that can be used during a mission to help even out the odds. There’s even a modicum of strategy in play here too, since while lower point rewards provide body armor and extra gadgets that keep you going in the short term, you might want to gain and save more points for more crucial buffs, such as a restoration of health or a sniper support command that murders three random enemies on the screen.

Above and beyond such buffs, Door Kickers: Action Squad also has a something of a robust progression system in place. Starting with the class system, there are a range of different classes available, each with their own strengths and weaknesses. The assaulter is great at providing sustained fire, but suffers from recoil issues. Whereas, the Shield class is great protecting against oncoming fire and explosions, but is weak against melee attacks.

The highlight however, has to be Agent Fergie, who can fire in two different directions at once and can combat roll underneath enemy attacks. She’s not someone to be trifled with, but requires a fair amount of skill to be used at her best.

In addition to these different classes that each boast their own strengths, weaknesses and challenges, players also earn upgrade points from each level that they fill the XP requirement for, providing skill points that can be put into skill trees to increase accuracy, reduce damage and that sort of thing. Furthermore, the ability to use gold stars, earned for completing mission objectives, to purchase new weapons and gear for each mission serves to bolster Action Squad’s surprisingly engrossing progression system yet further still – the temptation to score another gold star to unlock a new rifle or gadget often proving to be insurmountably irresistible.

Door Kickers: Action Squad Is Stuffed With Things To Do (And Kill)

In terms of sheer value, Door Kickers: Action Squad doesn’t disappoint. As well as the standard campaign, which can be played in local or online co-op, there is the Infinity Tower mode which provides a never-ending selection of randomly generated levels to tackle, while the much more interesting zombie invasion mode causes undead hordes to randomly burst out of the walls and attack friend and foe alike, forcing you to seal their breaches into the level for some big resupply point rewards in the process.

Though the audiovisual presentation side of things, a somewhat tired mashup of pixel art and 80s throwback guitar does little to inspire, Door Kickers: Action Squad nonetheless cements itself as an enjoyable little shooter that can fit quite neatly into the gaps that exist between everything else. What a lovely little surprise.