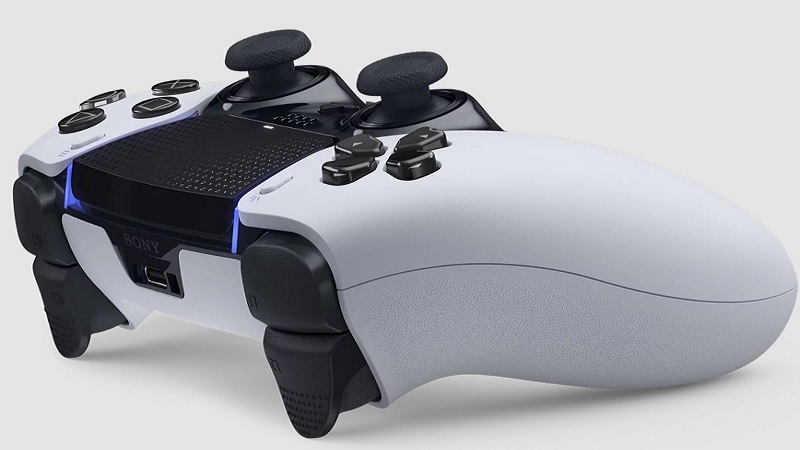 DualSense Edge PS5 Pro Controller Review. For all the much heralded ballyhoo that Sony’s current generation console received at launch (and continues to receive) for the various aspects of its technical excellence, such as its super fast SSD, improved visual capabilities and so on, it’s really the DualSense controller that feels like something approaching a true generational leap rather than the hardware itself. Universally beloved as one of the best pads to come along in decades, the DualSense controller unreservedly deserves such acclaim thanks to its sterling ergonomics and innovative use of haptic feedback and adaptive trigger technologies.

First Impressions – What You Get

Being a pro controller, the DualSense Edge obviously commands a premium price and that price point lands at around £209/$199 respectively. Though even seemingly expensive for a high-end pro controller, you actually get a fair amount for your money beyond just a controller and a box. In addition to the DualSense Edge itself you get a number of interchangeable caps, some connector housing, a super long, braided USB cable and a super glossy carrying case for the DualSense Edge to nestle itself into for portability or for just for charging, thanks to the handy flap that sits at the rear of the case which open allows the cable to pass through unimpeded.

The full list of stuff that you get with every DualSense Edge controller can be glimpsed below: 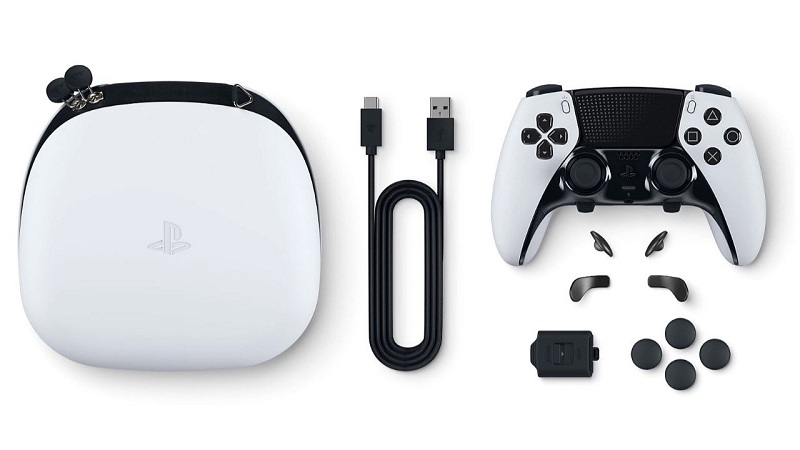 It’s worth nothing that everything that you get in addition to the DualSense Edge controller feels worthwhile, rather than just some padding afterthought. While I’ll get onto how the caps and extra buttons are used later on in this review from a functional standpoint, I really cannot understate just how premium the whole package feels. From the gorgeous, clamshell style carrying case to the welcome generous length of the braided USB cable (there’s no 0.5 meter tightwaddery here) and the neat construction of the connector housing to prevent it from slipping out during play, everything that the DualSense Edge controller package brings to the table feels appropriately high end elevated beyond what has been available on the market up until this point.

Ergonomics – How Does The DualSense Edge Controller Feel?

Speaking of comfort, the DualSense Edge goes the extra mile in this department thanks to the addition of slip-resistant inner grips on the controller which allow players to use the pad for extended periods of time with no degradation in grip. That’s right – the DualSense Edge has banished the slippery DualSense pad grips of old and I couldn’t be happier. 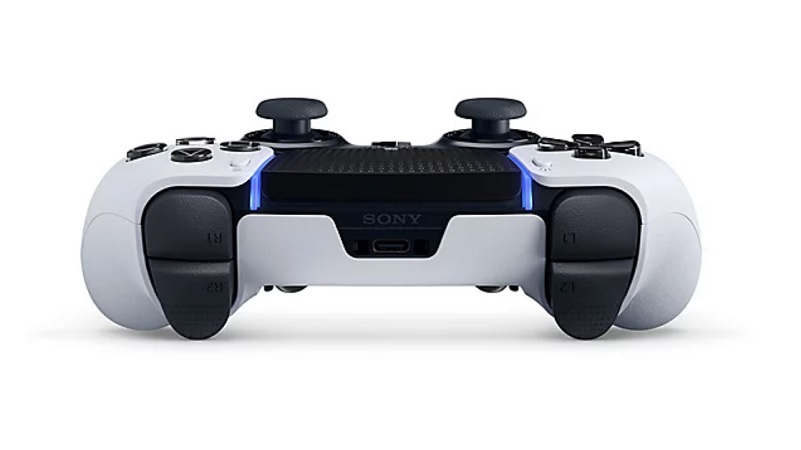 Elsewhere, the DualSense Edge also boasts newly embossed R2 and L2 triggers too which help with the overall goal of preventing the triggers from slipping out of your fingers during extended play, though the other buttons and analogue sticks still feel just as good as standard DualSense pad. The DualSense Edge then, is surprisingly, all about improving the comfort of the standard DualSense controller in ways that I totally didn’t expect and yet absolutely welcome. Any pro controller worth its salt should after all aim to improve ergonomics and I’m glad that Sony has delivered on that with DualSense Edge to say the least.

Quite simply, though the DualSense Edge looks largely identical to the classic DualSense controller (black buttons and pad grips notwithstanding), it feels so much better to use and while your mileage may personally vary on the aesthetics, there’s no denying that Sony has crafted a stunningly comfortable offering that is easily one of the best controllers ever made.

As well as providing a substantial improvement in comfort over the standard trusty DualSense controller, the DualSense Edge also places a premium on customisation, too. Immediately when you open up the DualSense Edge package that becomes apparent in the additional caps that have been provided, enabling players to swap out the caps on the analogue sticks for the convex style dome caps that shipped with PlayStation consoles prior to the release of the PS4.

Much more than just an aesthetic choice, swapping out these caps either together or separately can actually aid with your playstyle depending on the genre of games that you play the most. In a first-person shooter for example, you might want to have one concave cap and one convex cap for your analogue sticks to provide a nice middle ground of brisk movement and accurate targeting. It’s entirely up to you how or if you use the caps, but just having them available to customise the raw physicality of the controller itself according to your tastes is a boon nonetheless. 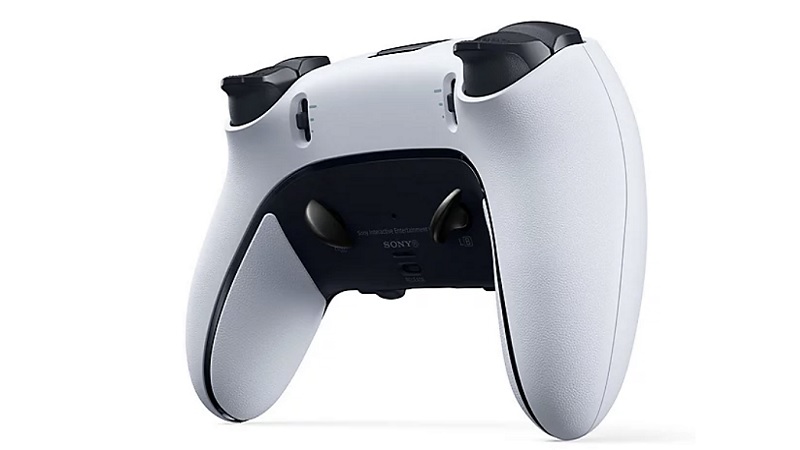 Starting with the triggers themselves there are dials on the back of the DualSense Edge controller that allow you to manually set the trigger resistance lengths for each of the adaptive triggers to up to three different levels of sensitivity. In practice, this actually turns out to be extremely useful as it allows you to precisely engineer how much you have to pull the trigger before firing off a round in Call of Duty: Modern Warfare II say, or how quickly the acceleration kicks in when you’re taking a car out for a spin in Gran Turismo 7.

You might have also noticed that the DualSense Edge has two extra buttons located on the rear of the controller. These are essentially two extra inputs that can be freely configured, handily allowing you access to whichever additional inputs you want them to be. The customisation of these two back buttons also feeds into the larger concept that DualSense Edge allows you to pretty much customise everything about the controller.

When you hook up the DualSense Edge controller to your PS5, you gain access to all manner of new menus in the UI which provide a broad suite of customisable elements. Everything from stick sensitivities, stick deadzones, haptic feedback levels, headset volume, game/chat audio balance and more can be adjusted here and even better still, the DualSense Edge can save every bit of customisation as one of a number of unique profile that can be invoked at anytime.

Certainly, accessing these profiles and presets couldn’t be easier either. The addition of two smaller paddles which sit underneath each of the analogue sticks on the DualSense Edge controller allow you to switch to one of four customisable profiles, simply by pressing the paddle in combination with one of the face buttons to activate the profile you want mid-game. It’s clever stuff absolutely that avoids the player having to halt their play to go into a bunch of menus and sort all this stuff out and the fact that Sony have made it so accessible at a moment’s notice means that the DualSense Edge controller can make a compelling case for being one of the most user friendly controllers on the market, too.

Battery Life – How Long Does The DualSense Battery Last?

In the run up to the release of the DualSense Edge, Sony hasn’t been able to provide a exact measurement on the battery life you can expect to get out of the controller, other than to say that it will offer ‘moderately shorter’ battery life than its predecessor.

Speaking from my own experience and using a marathon of The Last of Us Part I as an effective test case since it tests all of the functions of the DualSense Edge pretty frequently, I was able to squeeze just over six hours of play from Sony’s pro controller before I had to hook it up to the PS5 for charging (though you can still charge the DualSense Edge from existing charge docks, if you happen to have one of those). 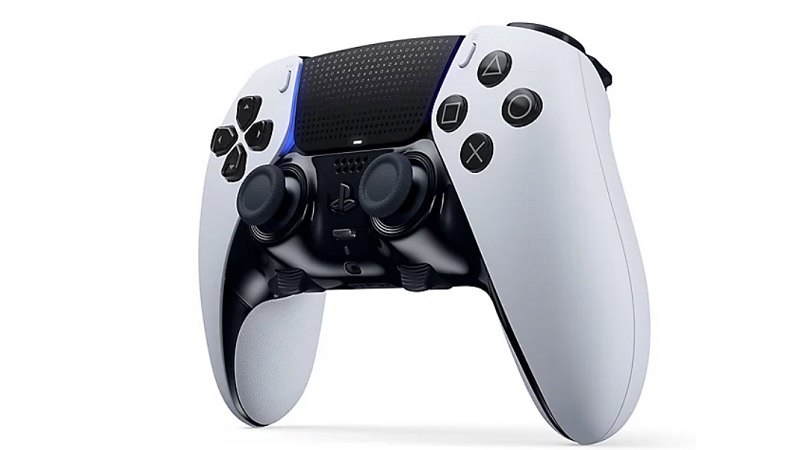 When compared to the battery life you can get from a fresh, out of the box standard DualSense controller, it falls short of the seven to eight hours or so that you would normally expect, but for me personally, the additional customisation features make the less capable battery feel like a worthy sacrifice.

To an extent this is mitigated by the super long USB cable that allows you to essentially keep the DualSense Edge controller moored to the PS5 console at all times, but certainly if you’re using it entirely wirelessly (and depending on the breadth of DualSense features that are used such as the haptic feedback, adaptive triggers and pad speaker), then you can expect the battery to drain faster than it perhaps otherwise would.

When the DualSense controller released alongside the PlayStation 5 back in late 2020, the maxim was that it was the first controller that made you ‘feel’ the games that you were playing by virtue of its cutting edge haptic feedback and adaptive trigger technologies. With the standard DualSense controller being a resoundingly comfortable controller to boot, Sony quite rightly felt that careful, additive iteration was the order of the day for the DualSense Edge rather than a wholesale reimagining of one of the best controllers on the market today.

With the DualSense Edge controller Sony has taken all of the features that made the DualSense so exceptional and given the player complete power to tailor it however they like, in addition to the provision of a generally more premium feel and keenly felt heft than the standard DualSense controller. Though the battery life has taken a hit in comparative terms to its predecessor, the DualSense Edge nonetheless justifies its high-end price point further still with a roundly impressive carry case and stick replacement feature that means you’re getting far more than just a pro controller in a box.

The DualSense Edge controller releases for general sale on January 26, 2023 for £209/$199 respectively and can be pre-ordered exclusively through PlayStation Direct.