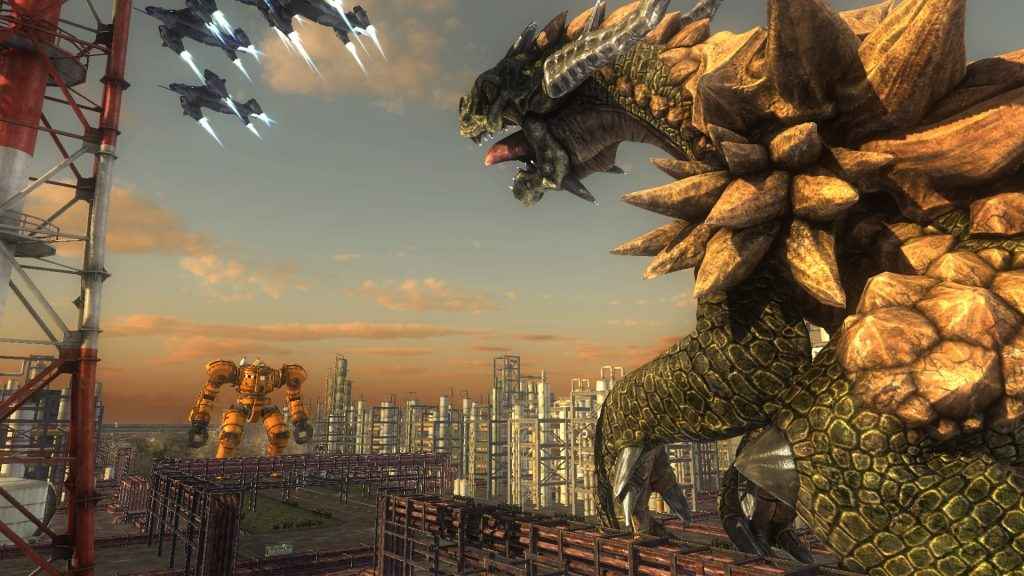 Earth Defense Force 5 (EDF 5) is the worst/best game I’ve played in a long while. The entire franchise has always been wacky but it’s fundamental pure joy to play.

The Earth Defense Force franchise is like playing a Starship Troopers game. The earth is under attack from an alien race of insects and amphibians. Giant ants, spiders, and humanoid frogs are invading earth and it’s up to you and the EDF (Earth Defense Force) to quell the invasion. It’s bonkers and fun at the same time.

Welcome to a new EDF

Missions take you from one random location to another. In one mission I would be facing off against bugs in the city the next mission I’m on a mountain side. The missions jump around from location to location too much to really have a cohesive story but it’s fun to listen to nevertheless.

Those who follow the lore of EDF will be interested to know that EDF 5 is actually a reboot of sorts for the franchise. It resets the story back to the beginning. The EDF this time around is a private Military force and this is their first encounter with the alien force.

The world of EDF is interesting, it’s almost as if their world lives without small insects. They refer to all them as monsters instead of giant insects. Either the game is written that way or the voice over actors went into the recording booth without any knowledge of what they were there to record. The voice work is also over the top but that’s always been a franchise staple.

A Class for each situation

Earth Defense Force 5 allows you to play between four classes: The Ranger, Wing Diver, Lancer, and Air Raider. Each one plays radically different and each one is more suited for specific situations between the games 115 missions.

You can switch classes between missions and each one can upgrade their weapons. During missions monsters will drop weapon crates, armor crates, and health crates. The weapon crates unlock new weapons randomly for each class.

From how I understood it – as their isn’t any real explanation – if you pick up a weapon crate that carries a weapon you already own it’ll level that weapon up with more damage, better recoil and accuracy.

Destruction is the name of the game

Vehicles also play a big role this time around but they aren’t any fun to use. The biggest problem is in the way they control. Using the L2 for acceleration and L1 to go in reverse. The controls are too clunky, forcing you to constantly re-adjust or don’t turn at all and get stuck on everything.

A fantastic addition to EDF 5 is the body damage. The monster now brakes apart in pieces, get riddled with bullet holes and their blood sprays all over the floor and buildings. It’s grossly satisfying to watch it happen. There is nothing like seeing dozens of giant ants coming at you and blasting them with rocket launchers and seeing them flying across the screen.

There are also destructible environments. Blasting buildings will leave a hole in it and with enough blasts you can watch it crumble down. At points you will experience an incredible amount of destruction and a populated city location will be left in dust and rubble. It truly feels like you’re in a massive war against an alien race hell bent on your absolute destruction.

Defend earth with your friends

EDF 5 supports four player online co-op for friends or two player split-screen, so you can take the fun of killing alien bugs online with your friends. This can be helpful on the harder difficulty and later missions when the going gets really tough.

Graphically, it doesn’t really change much from all of its predecessors outside of the added body damage and destructible environments. It’s probably what helps the franchise feel huge when it comes to how many enemies appear on screen and keep it running smooth though.

The menu interface is also plain, boring, and uninspired. Most of the time it’s hard to really tell what your doing between missions but this again adds to what the franchise is: a cheesy 70’s sci-fi experience and everything about its design screams that.

Earth Defense Force 5 is just pure joy to play. Sure, it has problems but they don’t distract the from what the game is trying to be: an over-the-top sci-fi epic. When all is said and done, it’s easily the funniest and most improved title in the franchise.

Earth Defense Force 5 may seem like a mess but it all adds to its charm. The pure joy of taking on hundreds of monsters and watching the destruction unfold is something the franchise has always been good at. EDF 5 is easily the best in the franchise.