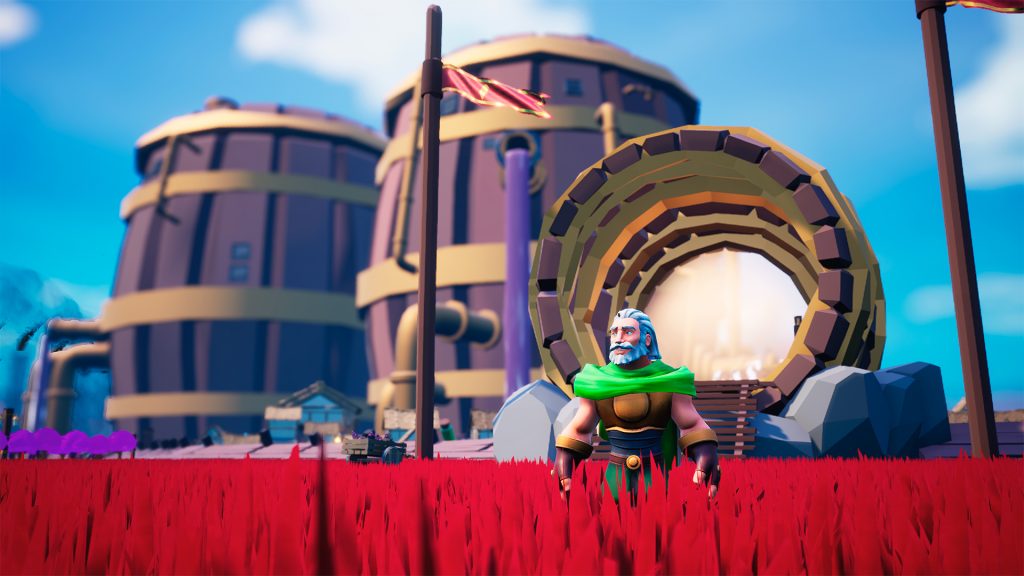 Effie is a gorgeous indie title from the Square Enix Collective and developed by Inverge Studios. Taking inspiration from some of the best 3D platformers of the past decade, Inverge have created a charming and fun adventure. Humor, platforming, and exploration are combined together to create one of the more enjoyable and surprising Indie titles to release this year.

Effie tells the story of Galand a young man who is cursed by a witch to live out the rest of his life as a middle-aged man. Galand sets off on an adventure to restore his youth and bring down the witch that cursed him, rescuing a kingdom from darkness in the process. The story is charming and presented like a fairy tale.

The narrator: an elderly man, tells the story of Galand to a young girl named Effie. The narrator is perfect and quite funny at times. Whenever Galand is defeated in combat the narrator would jump in and say “that’s not how the story went” among a number of other colorful lines. My only real gripe with the story is that you can’t skip the cutscenes. This becomes annoying when you have to re-watch them every time you’re defeated in a boss battle.

Effie Is A Beautiful Game With Striking Colors

Galand’s adventure takes place in the Red Plains, a vast kingdom full of red trees and vibrant foliage. That kingdom is gorgeous and the foliage stands out in the best way with a mix of red, blue, yellow, and purple trees and grass blades. Because the Red Plains are so vast you don’t have to run around the entire place, unless you want to. Galand’s main weapon in combat is also his transportation device. It is a magical Shield called the Runeshield that allows him to not only fend off foes but also use the Shield as a hoverboard to get across the Red Plains.

The Runeshield helps to transverse this land rather quickly. It isn’t that fast, but there are plenty of speed panels for you to hit all over the Red Plains. These speed panels will constantly speed you up and allow you to fly across the plains by jumping off ramps. The Plains have a few side areas to explore and hidden collectibles to pick-up. Unfortunately, there are a lot of open areas that have nothing going on.

It would have been nice to have a lot more areas to explore than what’s provided, as I found myself with long periods of time traversing the land with nothing to really do or see. Some races or other activities would have gone a long way with the games replayability and longevity, especially since you can complete the game in about five hours if you simply go through the story missions.

Effie takes a lot of inspiration from great 3D platformers of the past. Most of the game’s dungeon-like locations involve platforming and avoiding traps and pitfalls all over the place. The dangers that await Galand are numerous but aren’t too hard to avoid. I never really had a hard time with the platforming itself; but, there are times where the instant death sections can tire you out, especially when you have to start entire lengthy sections from the beginning.

Combat is where Effie falters, at least in the early stages of the game. Before you acquire the Earthquake Smash and the Boomerang attacks, combat can be very flimsy. Firstly, there is no lock-on button and I found myself constantly swinging at the air because Galand has a pretty hard time turning to face opponents behind or even to the side of him when he’s attacking.

Enemies themselves aren’t hard to defeat and fall into a simple pattern of mashing the heavy attack button which will stun most enemies long enough to land attacks and defeat them. Also, it doesn’t help that the attack animations don’t flow smoothly making the Earthquake and Boomerang attacks essential thanks to their area of effect damage.

Effie is a gorgeous game. The developer’s unique take on the art design is something I truly appreciated. The use of low polygon models and cartoonish graphics proves that indie titles are still going out of their way to look unique and separate themselves from the heavy hitters.

I adored my time playing Effie. the Red Plains are a gorgeous location to explore and the platforming comes with plenty of challenges. It’s unfortunate that the combat doesn’t show the same heart that the rest of the game displays.

Effie is good 3D Platformer that left me with a big smile on face. The Red Plains are a beautiful location to explore, especially given that you have an awesome hoverboard to do it with. The combat does hold it back a bit but the overall package is one that fans of 3D Platformers should definitely experience.