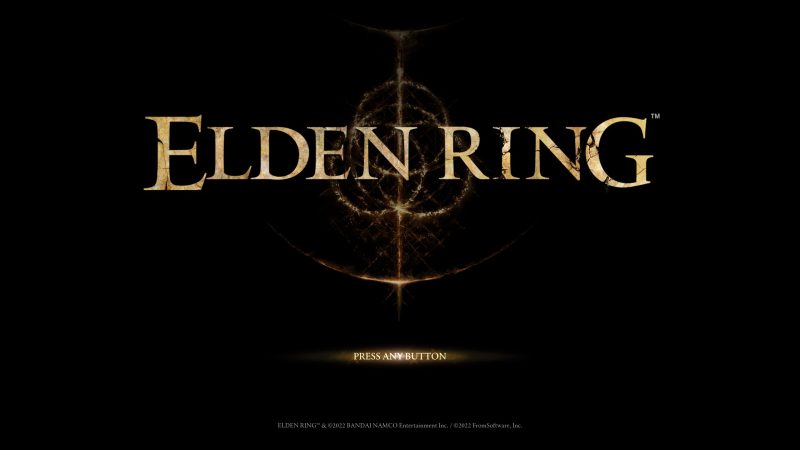 Elden Ring Review (PS5) – Last week, when the embargo for Elden Ring hit I released a review in progress, which you should go read if you’ve not done.

This week, I’m ready to present the full review of Elden Ring, and give it a final score. Last week I spoke about what it’s like to explore Elden Ring and why calling the fantasy epic a “big Dark Souls” is correct, but it achieves this in more ways than just scale, and combat.

I’ll touch a little more on these again, but I’m going to talk more about bosses, technical issues I’ve faced, and the difficulty in Elden Ring.

But mainly, I’m going to try and explain why I believe this to be a 10/10 game, despite its flaws.

Elden Ring Review (PS5) – Emboldened By The Flame Of Ambition

A World To Remember 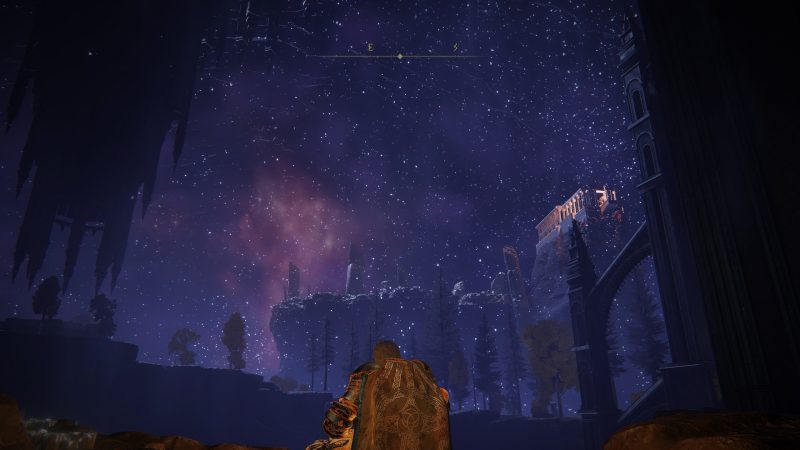 For all the detail, for all the lore, and for all the creatures to be found in previous FromSoftware titles, the settings of each of them, in one way or another feel dead.

Even Sekiro, being placed in a semi-real world setting despite its mystical aspects struggles to feel like more than a well designed video game.

None of them have felt alive, and I used to think that was part of the theme. Most of the world you encounter in Souls games are filled with undead enemies, dead things everywhere, and death at all corners.

Overcoming all that, restoring your humanity, and succeeding on your journey each time I thought part of the whole schtick. Which makes The Lands Between all the more shocking and beautiful because it doesn’t feel dead at all. 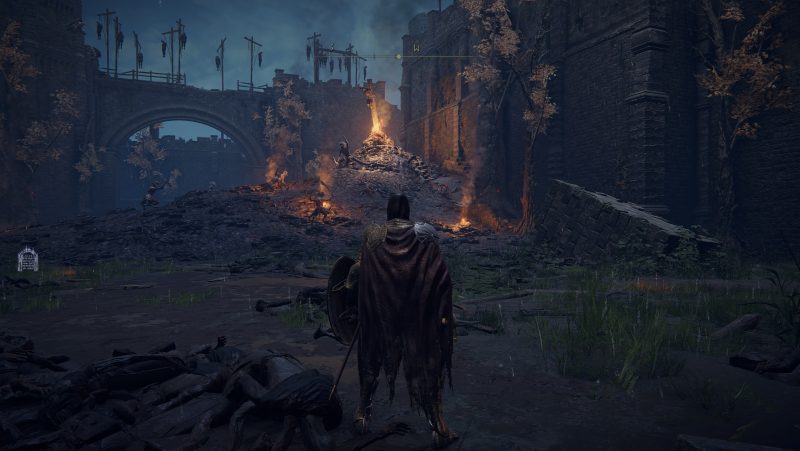 It truly feels alive, and that’s just the underbelly of what makes this a cut above other open-world games. The design of the world, the day and night cycle, the constant changing of weather, and the animals you’ll find frolicking.

All that contributes to making the world feel alive, but what really clinches it for me is the enemy variety across the entire game. Yes, you’ll see variants of certain enemies, but each area includes entirely different creatures your worst nightmares couldn’t have dreamt up.

Along with the entire lack of handholding as to where to go on the map, The Lands Between comes together as one of the most exciting open-worlds settings to explore to date. In fact, I’d go so far as to call it the best open world we’ve seen yet. 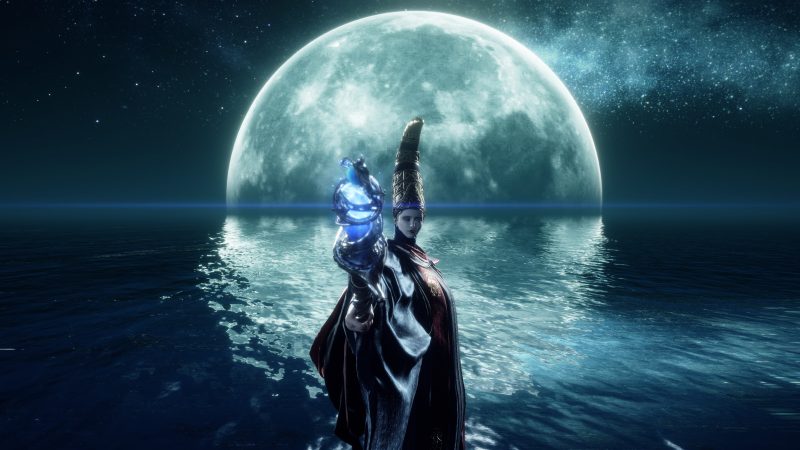 There’s a notion that’s mainly peddled from within the Souls community, that FromSoftware’s games are all exceedingly, infuriatingly difficult. So, being able to conquer them must mean you have superior gaming skills.

That’s not at all true. FromSoftware has made a reputation on creating difficult games, yes, but these games are by no means impossible. Yes, they can piss you off, but they really aren’t as difficult as the community makes them out to be.

The reason being is that there’s almost always a trick or weakness to exploit with each enemy and boss, and each Souls game allows you to create and build a character to your liking and playstyle.

Elden Ring is the perfect realization of abandoning the limits that partially gatekept Souls games from many players.

Yes, you can create your character how you like in Elden Ring and Dark Souls before it, but the more linear nature of Dark Souls creates more unavoidable roadblocks, that you’re left banging your head against sometimes long enough that you give up. 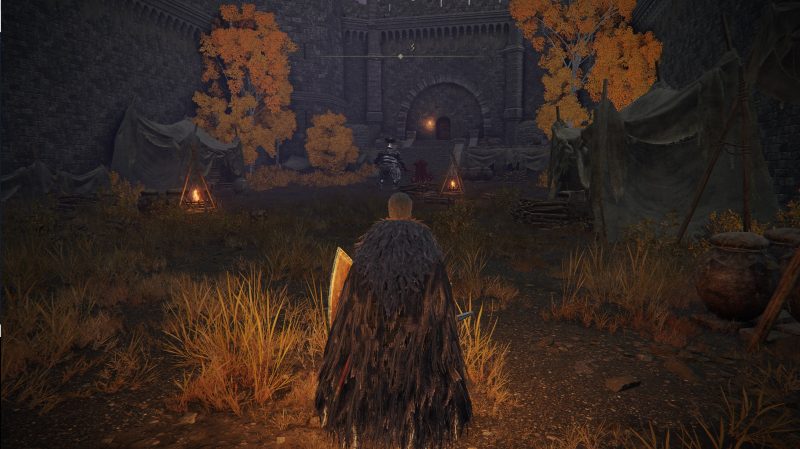 It’s happened to me in previous FromSoftware games, and though I’ve come back to these challenges eventually I had to just put the game down for a while, due to my frustration.

You are always encourage to do the exact opposite in Elden Ring. Having difficulty with something right now? Go anywhere else, and see what’s over there. Maybe it won’t be as tough, maybe it will. If it is, go somewhere else again.

Nothing is rushing you. You don’t have a quest log constantly reminding you of your next big task. It’s all at your pace, your journey, your discovery.

In this way, you’re constantly acquiring important and useful items, spells, weapons, armour, and even runes just lying on the ground. It all works to make the consequence of death feel more insignificant than it’s felt before.

Losing a lot of runes will still hurt, but it’s made easier knowing that the world is designed for you to be in a constant state of progression. 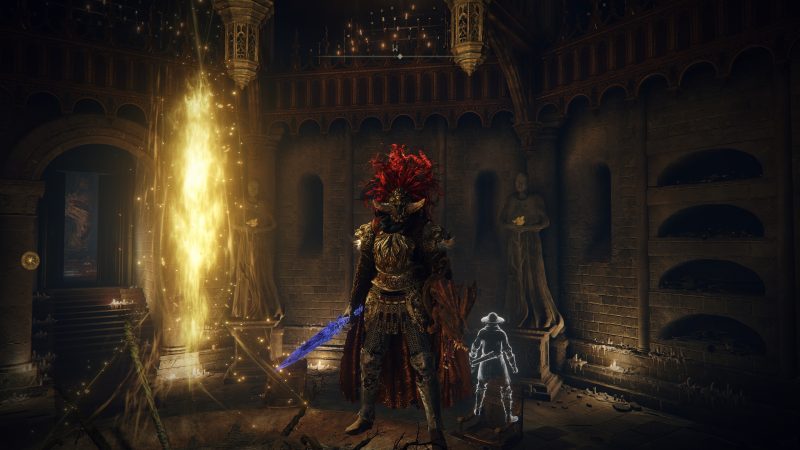 This is why Elden Ring is the most approachable FromSoftware game yet. You don’t need to bang your head against anything for more than five minutes if you don’t want to.

Everyone can jump in and discover a path that works for them, a playstyle, and if you can surpass even just Margit, The Fell Omen then the rest of the game is within your grasp.

I know there will still be people who this game just isn’t for. There is a difference in difficulty from later bosses to early game bosses, but late game areas also provide some of the best farming to be found for runes in Elden Ring.

Elden Ring is still a very challenging game, one that will likely take you a long time to complete. But there has never been a more approachable FromSoftware title than this, and it’s the most balanced the difficulty has felt for a long time.

The Many Bosses Of Elden Ring 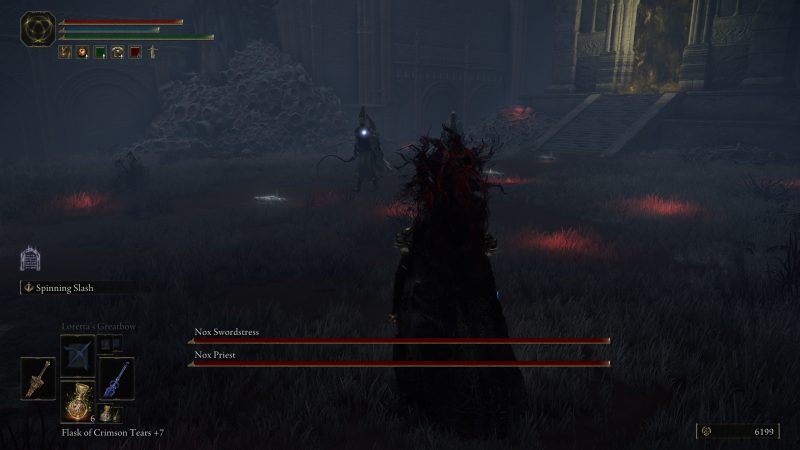 There are a lot – and I do mean a lot – of bosses in Elden Ring. Some small, some medium, some big, with a variety of those flavours being mandatory to complete the game.

Veteran Souls players will recognize similarities with different bosses from previous games, whether it be in their design, their attack patterns and so on. However, that doesn’t mean the bosses of Elden Ring aren’t unique.

The big issue the bosses in Elden Ring do have however, is repetition. This isn’t a big concern with the mainline bosses, but it is with all the mini bosses and optional bosses you’ll face.

I didn’t like fighting the Magma Wyrm the first time, and I didn’t like it the next two times either. It also began to feel more boring as I found myself clearing caves and catacombs I’d missed or left for a time, and running over the boss like nothing.

It’s a nice power trip, but that doesn’t last when the runes you’re awarded for your efforts fail to satisfy. 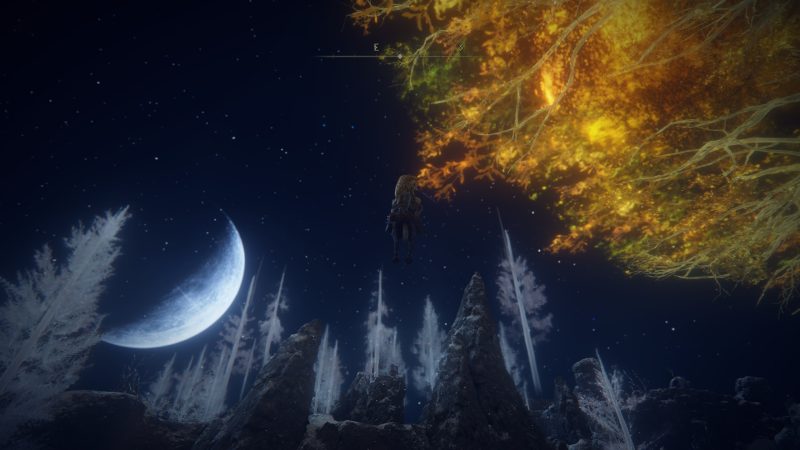 This doesn’t mean these fights are bad the first time – sometimes all it takes for a good repeat boss is to have one or two different attacks to shake things up. But the spontaneity and heart-pounding clinches that make up the best fights in the game are lessened every I find myself fighting the same boss I’ve fought before, just in a different cave.

There is a mandatory boss, which is almost a repeat of another, but the encounter is tweak enough so that it doesn’t feel similar at all. The rest of the mainline bosses are some of my favourite fights I’ve experienced in FromSoftware games.

The quality of the bosses overall then sort of evens out, because the highs you’ll feel from the mandatory, big spectacle fights are some of the best in the developers history.

The Flame Of Ambition 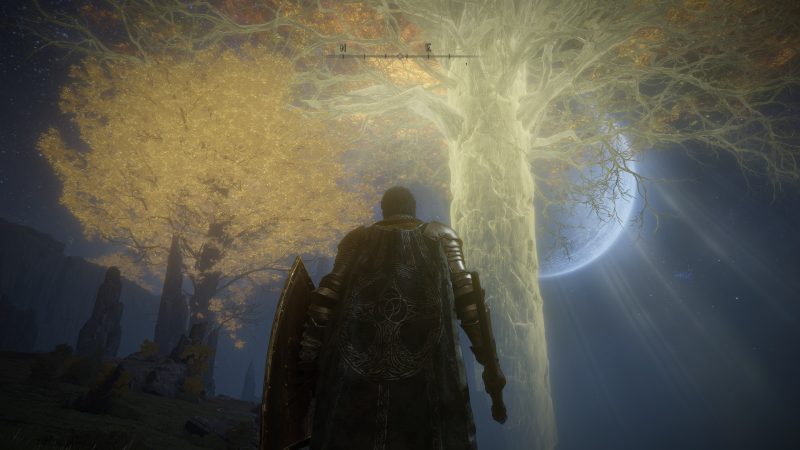 Despite all the aspects of Elden Ring that are spectacular and innovating, the experience – especially on PC – is disappointingly held back by its performance.There hasn’t been a single session since I’ve received my code on PC where I’ve not dropped frames and stuttered to the point of a frozen picture, and then it catches up a second later.

It’s annoying, especially for it to happen in fights, though I’ve been lucky enough to not die as a result, most of the time. The other annoying thing is that after a stutter, I’ll go minutes, even an hour without seeing any issues at all. And then the stutter rears its head.

It almost feels like everything Elden Ring is crumbling under its own ambitions, though when it does work, the game achieves in everything it is trying to do so amazingly that I feel like I’m playing a new kind of open-world game. 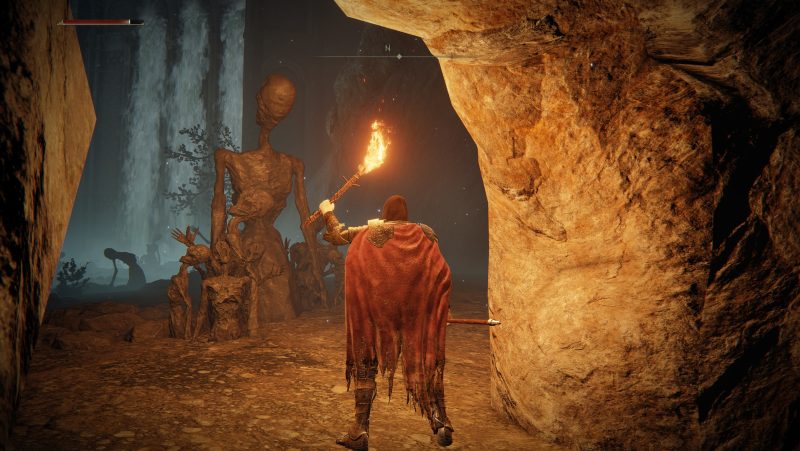 Stuttering isn’t the only issue on PC however, as I’ve also dealt with my game crashing, especially towards the end of a lengthy session. Since launch struck I have also been able to play Elden Ring on PS5 for a time, and can attest that it definitely runs a lot better on consoles right now.

Nonetheless, having technical issues like this both before and now after launch is especially upsetting when considering that the best version of Sekiro: Shadows Die Twice lives on PC.

Another FromSoftware launch with frustrating technical issues is the last thing Elden Ring needed, but still don’t think it really holds the game back. 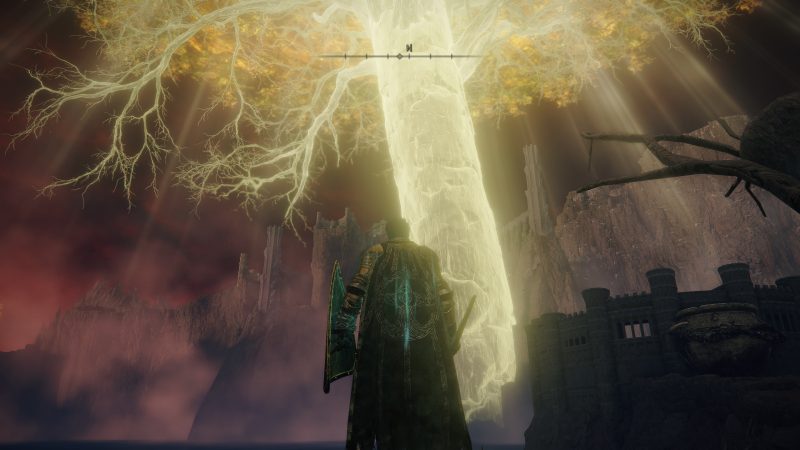 I might not have it as bad as some other players, but even with all these issues I still can’t even fathom playing any other game for another two weeks.

There’s also the thought in my mind that, these issues will not persist forever. FromSoftware will patch them out. But as it stands, the version being sold right now is still in rough shape, and if you’re someone who struggles to tolerate the slightest performance issues, then you may just want to wait until they’re solved.

It’s incredible to think about the high hopes that I, and many other players had for Elden Ring prior to release. Now having spent a substantial amount of time with the game, I still can’t believe it blew all my expectations out of the water, and then some.

Elden Ring is the Souls formula that players already loved epitomized in a way that not only improves its every facet, but makes it the most approachable FromSoftware game yet.

The technical issues I’ve faced have been trying, but even having my game crash twice in one session doesn’t make me want to stop playing.

Because when it does work, it’s one of the best games I have ever played, period. Elden Ring is the Elden Lord of open-world games, and open-world design.

Elden Ring took the best parts of previous FromSoftware games and expanded them across a living open-world with endless discovery, excitement, and danger. It's not lost the edge of previous titles, but it is the most approachable FromSoftware game yet, and is an excellent point for players to jump in on if they've not tried previous titles. While its technical issues can be annoying, even they can't dampen the experience of playing Elden Ring. FromSoftware's latest is an artistic, innovative and cultural achievement like nothing before it.