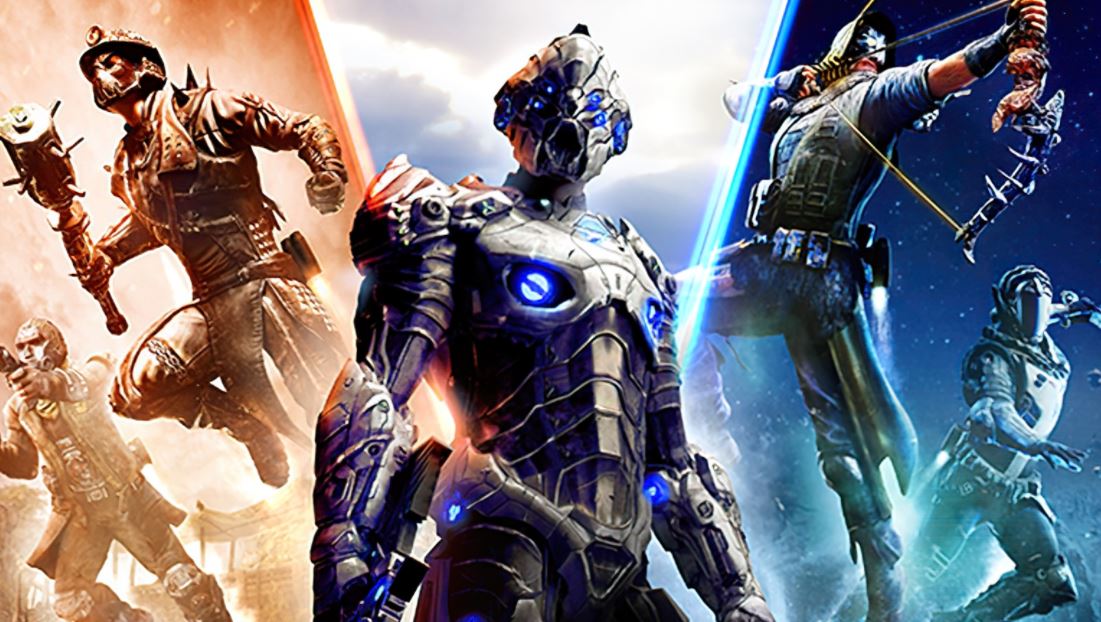 Elex 2 PS5 Review – Piranha Bytes brings back the world of Elex in a new form with Elex 2. This time around, an alien invasion threatens the dilapidated planet and those who live there. If you’re familiar with Elex, you should have a pretty good idea of what to expect, and in many ways, it’s familiar territory here. However, it’s where the handful of improvements come in that can make or break the game for some players.

Dropped In The Middle of Nowhere

The game starts in the middle of nowhere in a small house where the player character, Jax, sleeps. Shortly after this scene begins, an alien device falls from the sky and plows right through Jax’s house. After fending off three alien quadrupeds, he wanders to the nearest gathering of people in hopes of thwarting this alien invasion.

Elex 2 leaves a lot of ground to cover in this review, which segues well into the first point: exploration. The map stretches across a vast distance, and most of it looks lush and vibrant (apart from the dilapidated structures, of course). However, apart from the handful of enemies sprinkled around the map, the game doesn’t offer much to interact with.

The jetpack you receive at the beginning of the game makes traversing a bit better, but only when it comes to tall mountains or moving around in different bases. While limited to small bursts in the beginning, you find occasional upgrades for it to give you longer flight time. Unfortunately, the jetpack doesn’t make running across the map much easier, no matter how much you improve it. 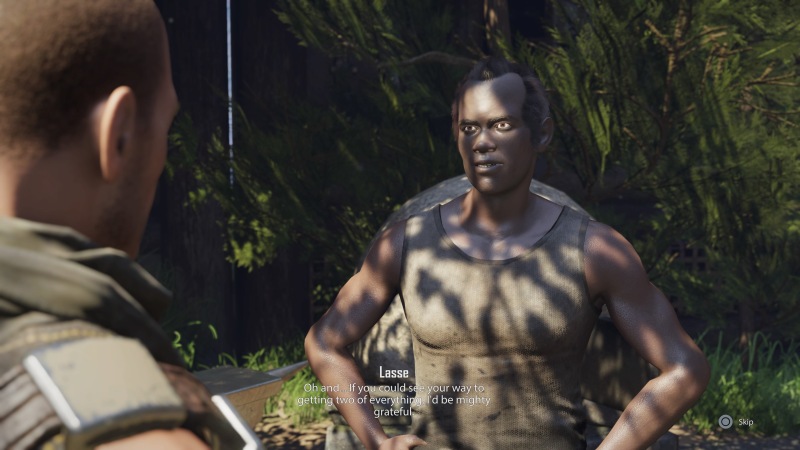 Going back to the map aesthetic, I get blown away regularly by how the natural lighting delivers shadows. Each leaf on trees is clearly defined on the ground, even when the wind blows. Even though the ground textures are hit and miss, the foliage shares similar movement with the wind just like the trees do.

Aesthetics Both Weak And Strong

The payoff for this vibrant presentation comes at the cost of frame rate. Oftentimes, the rate sits around 30 frames or so, which is easy enough to get used to. When you get to more densely populated areas, however, that frame rate halves. When you open the menu, the world still doesn’t pause, which drops performance even further. This side of the game could have been ironed out far better, but the payoff is still worth the cost, in my opinion.

On the topic of payoff, another cost to the fantastic natural lighting is character models. While they look clean and well defined, they look more like remastered PS3-grade models than something more commonly found on PS4 even. At the same time, straight and curly hair looks hi-res and defined. Unfortunately, though, kinky hair looks just detached like a wig, a far-too-common casualty to character design. 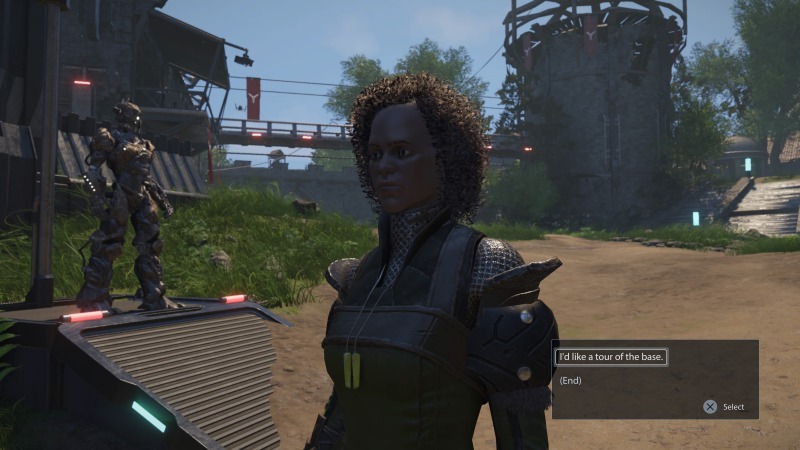 It’s nitpicking at this point, but I couldn’t help but notice that the lack of fingernails on some fingers coupled with their model work make the fingers look less like phalanges and more like they’re uncircumcised.

For the first ten hours of the game or so, you either follow quest givers around or need to run across wide expanses and back to complete your task. A few teleporters here and there make getting around somewhat easier as you go, but finding them takes extra time. They aren’t placed in obvious spots, and some of them even sit next to large enemies.

The quests themselves compound this issue because no quest simply ends after one task. You often run back and forth between two characters playing telephone, and these characters never stick close together. So much time goes to just running around doing menial tasks. Granted, the dialogue between characters often makes up for it, but that doesn’t excuse the time wasted.

Combat is clunky, plain and simple. Character movement requires a little timing just because all actions take extra time. This works well enough because enemy AI lacks the kind of sophistication to require deep understanding of combat mechanics. Attack a few times, walk away, and watch the enemy charge at thin air. 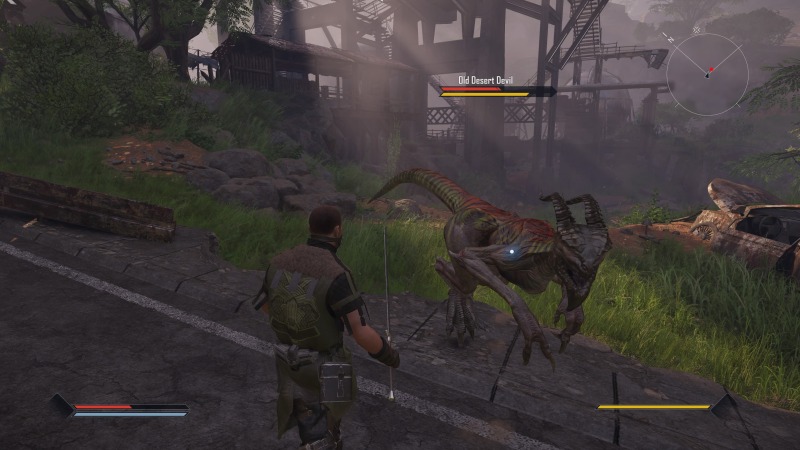 Both you and the enemy have access to quick attacks as well as charge attacks, but quick attacks don’t do anywhere near as much damage. Enemies hit quickly and often get in random cheap shots due to being locked on. Charge attacks do not lock on and basically miss as long as you move. Combat is clunky, but the limitations affect both you and your enemies. This doesn’t wash away the issues, but this does make them easier to get used to.

Elsewhere, you get a simple skill tree that coincides with five basic stats that you apply points to, such as strength, constitution, and dexterity. Each skill requires some kind of combination of points in each stat to level up, so you can’t just do everything at once. I appreciate this because getting overpowered too quickly makes the game boring.

For an MMORPG, the progression in Elex 2 feels normal. In a standard single-player RPG, the progression feels out of place. While you have a menu available at all times to look at your full skill tree, you cannot unlock those skills unless you have both the necessary stats AND speak with a specific in-game trainer. 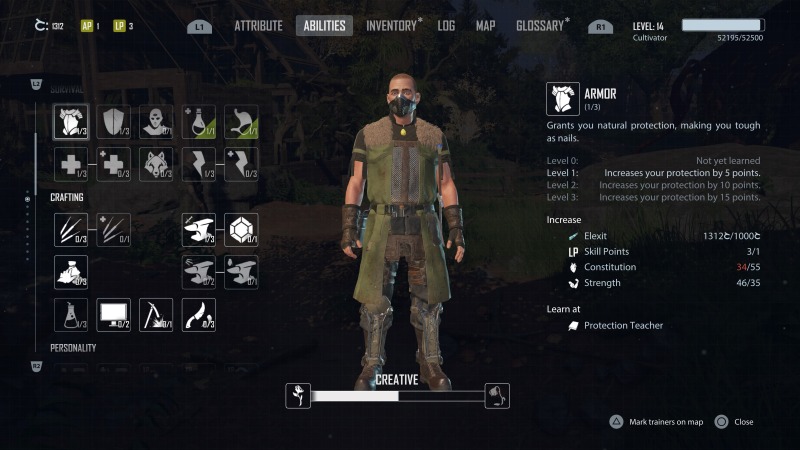 This works in games like Skyrim because you can just buy (or steal) a scroll or book that will teach you a skill later on when you build up the necessary stats. The only time you need to return to a trainer is if you forgot something or wanted to try something new.

Piranha Bytes has a clear intention with this, since many of their creative decisions imply that they’re aiming for a sense of realism. At the same time, Elex 2 is still a game. I appreciate that the player must invest time into the product in order to maximize it, but the player also needs some convenience to utilize and enjoy what the game offers.

Overall, Elex 2 creates a pattern of give and take with what it wants to do and how it executes those ideas. Fantastic lighting in exchange for low-poly characters and lowered frame rate; simple traversal at the cost of an engaging map. This pattern continues on with most of the points I bring to this review, but some of these tradeoffs feel different from the ones detailed above.

The writing in Elex 2 is equal parts fantastic and unrefined. In bad terms, many lines spoken tend to direct the plot more than feel realistic. For instance, at the very beginning of the game, Jax reunites with his son after a few weeks of not seeing him. 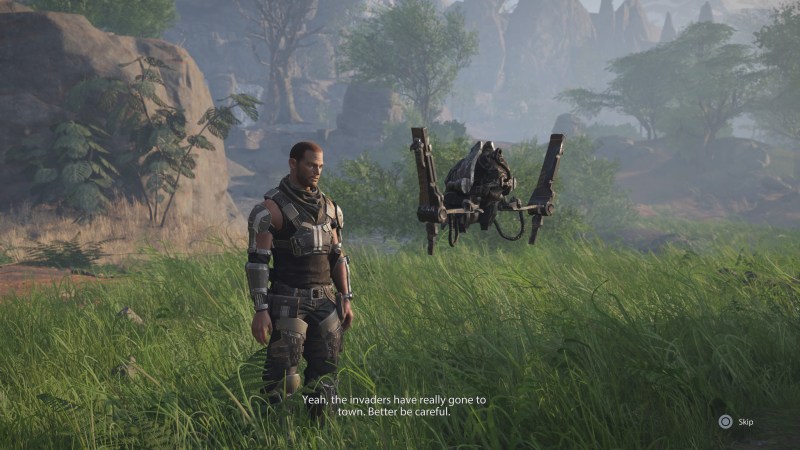 However, the first thing his son says is “Mom tells me the Outlaws are bad people.” You find out later that Jax and his son have a decent enough relationship, so this introduction to his character just feels forced into a specific intention instead of letting the son be his own character.

Similar lines from other characters you meet come across in equally forced ways and break the immersion that Elex 2 works to create elsewhere.

Notice I said “immersion” in the previous point. That’s because another aspect of Elex’ writing comes with how it interweaves different lines of dialogue with different scenarios happening at the same time. I started a line of dialogue with one of my allies about a quest, but someone she hates walked by and she cut off our conversation to go yell at the other person before coming back to you. This happened many, many times, and I never forgot them.

The immersion gets especially deep when in a concentrated group of people. One quest carries into another into another, and several people jump in at different points to either give you a counter objective for a new quest altogether. Much of what you do in the game finds its way to other characters you meet, even ones you haven’t found yet. Elex makes sure that even your random influences make sense. 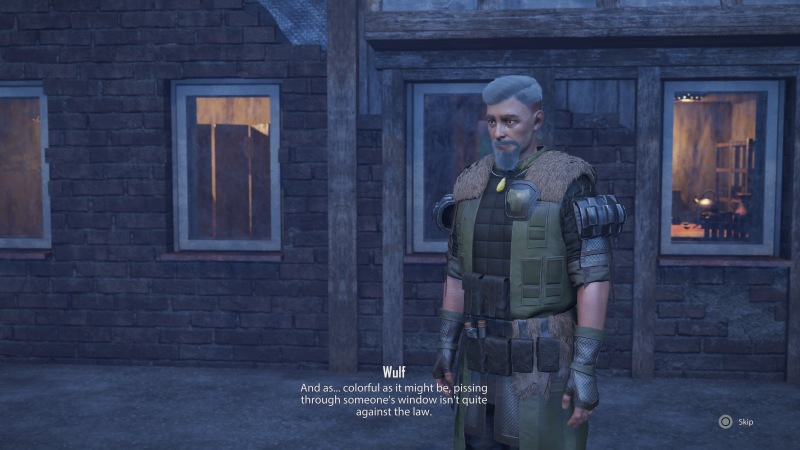 Of course, there’s a tradeoff: Many lines of dialogue end up feeling janky or disorientated when different characters cross paths like this. Unlike most of the tradeoffs mentioned above, I find myself neglecting to feel frustrated with this tradeoff.

The ambition and execution of character interaction does enough well that its flaws just feel more like hiccups rather than breaks in immersion. It helps that the characters themselves aren’t too developed, but that still plays well enough into what Elex wants to do.

The best offering Elex 2 has is its voice acting. Not all earn Oscars, but most of them do enough to keep you invested in the writing, even when it fumbles. Not one voice feels badly casted, and no actor underwhelms. At minimum, they deliver their lines in a presentative way; at best, they apply emotion and tone when the scenario calls for it.

Look Before You Leap

Elex 2 is one of those mixed bags where, once you come around to it, its list of shortcomings begin to materialise as either negligible or humorous. You never go a moment where you don’t see them, but you grow into it the longer you play. It took me about ten hours to truly get into what Elex 2 offers up, but I appreciate that I went through it.

Equally so, I know I wouldn’t have pushed through those first 10 hours if I hadn’t been reviewing this game. There’s a lot in Elex 2 to enjoy, but there’s an awful lot of downtime, jank, and clunkiness along the way. The trick with Elex 2 is knowing what you’re getting into. Expect a massive concept from a small team and you’ll get a feel for how the game plays.

Elex 2 asks a lot of you and only gives so much in return. The game provides several special concepts and attempts, but the team’s resources limit their potential the entire way. As long as you know what Elex 2 has in store, you might find something there for you.