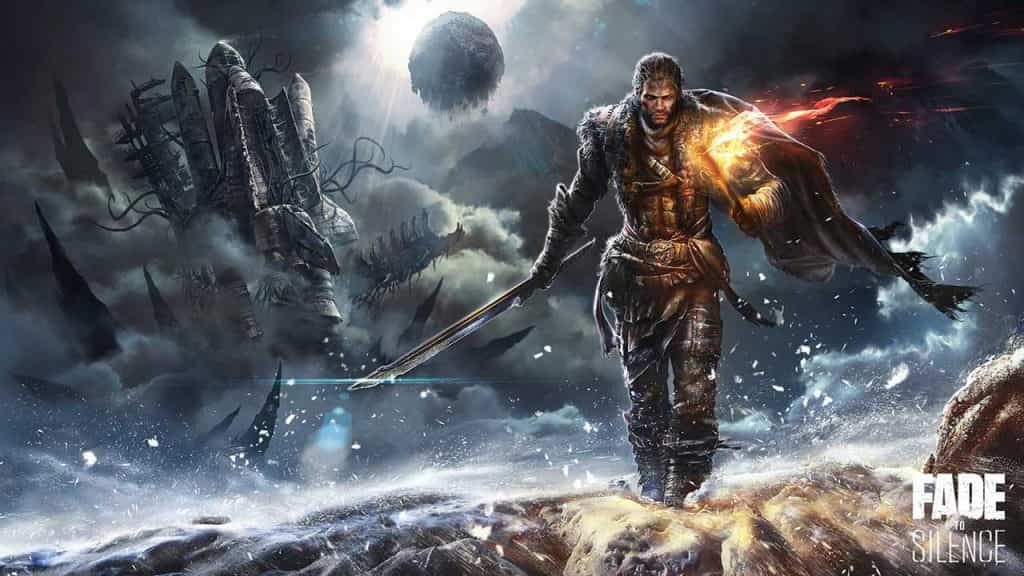 From Subnautica and Conan Exiles through to the stellar likes of The Forest, the survival sandbox genre has come on leaps and bounds since Ark: Survival Evolved landed on PS4 shores all those years ago. The latest card-carrying member of the genre has arrived in Fade to Silence – an effort that really attempts to bring something distinctive and fresh to this whole survival sandbox shtick.

Fade to Silence brings something fresh to the survival sandbox genre

As Ash, one of the few survivors of a frigid apocalypse, you find yourself in the position of having to protect your daughter as you seek out resources to expand your refuge and eventually undo a ancient evil known as the Eclipse that has gripped the world. So far, so survival sandbox.

At the start of every new game, Fade to Silence lets players choose between two modes – exploration mode with infinite lives, resources and less hardy enemies and survival mode which is much more difficult and has limited lives, resources and much stronger foes to contend with. Pointedly, trophies can only be unlocked in survival mode, but to make things a little less harsh, the additional Circle of Torment skill tree provides unique unlockable buffs which persist after death.

Make no mistake though – if you intend to play Fade to Silence in survival mode, be prepared for a game that is harder than a frozen pack of dog turds. Everything becomes punishing, from the gathering of resources to combat, the amount of damage enemies deal and the fact that you have a desperately limited set of lives, survival mode in Fade to Silence is only recommended for the most stalwart (and patient) of survival veterans.

The most immediate and obvious way that the Lovecraftian influence in Fade to Silence is felt is through the primary antagonist himself, a demonic presence that constantly taunts the player for both everything they do wrong, and everything they do right, too. Beyond his oppressive goading, the Eclipse manifests itself in other, more direct ways too.

Nests spew forth all manner of nightmarish creatures and when destroyed proffer up loot and even occasionally survivors, whereas strongholds are veritable bastions of evil that when cleansed not only provide you with a safe zone and a ton of resources, but also with the ability to fast travel between other strongholds and your own starting refuge.

In most survival games, the goal is simply to, well, survive, but in Fade to Silence having these nests and strongholds to destroy and liberate gives you a hard and fast set of objectives above and beyond what’s normally expected. This, my friends, is a good thing. And as if nests, strongholds and bands of wandering murderous demons weren’t enough, Fade to Silence periodically has a floating mass of twisted cars and buildings circle above your head and drop all manners of junk down on top of you.

Fade to Silence’s commitment to keeping you uneasy and paranoid is reflected through its superbly crafted atmospherics too – as rushing, gusty winds carry demonic sounds to your ears and deep, thick blizzards conceal enemies and serve to stymie your every step. Speaking of steps, the game world of Fade to Silence is vast and running from place to place as you venture farther out just isn’t tenable, so naturally, this is where the wolf sleds come in which can be used to satisfyingly spirit you (and your loot) at speed across the frozen tundra.

Fade to Silence impresses early on the fact that it isn’t just you on your lonesome against the apocalypse. Indeed, in addition to the nest mashing and general kicking to the Eclipse which must be dealt out on a regular basis, first and foremost you should seek to establish some infrastructure and the only way to do that is to rescue survivors.

Once rescued from the clutches of the Eclipse, survivors can be put to work – either hunting and foraging for food and resources in areas that you’ve made safe by doing so yourself, or, they can be used to build additional structures such as crafting huts, which greatly expand the variety of items, weapons and armor you can create, for example.

Beyond such uses, each survivor also comes with their own trades, strengths and weaknesses too which can be leveraged to your advantage. One survivor might be a talented hunter and could make use of animal carcasses to provide additional food for the horrendously chilly twilight hours, while another might be an adept metalworker who, with the right facilities and materials, can forge you some deadly weaponry and armor to allow you to properly take the fight to the Eclipse.

Community building is at the forefront of the experience; constructing buildings to support different types of tradesman who in turn provide a range of different resources and services. More than just their utility however, these new additions to your refuge must be looked after with ample firewood and food provided to keep them warm and their bellies full – failure to do so resulting in plummeting morale and a refusal to complete tasks.

Where things start to escalate is when your refuge reaches a certain size, as this attracts the attention of the Eclipse which will periodically launch attacks against your refuge, requiring, in turn, that you construct defenses and fortifications to protect it. Again, this is yet another consideration which must be accommodated by the player, providing little respite when taken in tandem with Fade to Silence’s already time-consuming resource hunting, crafting and monster mashing activities. Simply put, you never get bored in Fade to Silence as there is always something to do.

Poor combat, some unexplained mechanics and lackluster co-op detract from the experience

Unfortunately, there are a fair few aspects of Fade to Silence which are simply not up to par and which tarnish the good work wrought elsewhere in its design. The biggest offender, by far, is the combat. A poorly realized take on Dark Souls esque template of battering foes, attacks lack any kind of heft and seem to merely go through your foes rather than satisfyingly colliding with them as one might expect, while your stamina saps far too quickly as you block and attack; making combat flow far less well as a result.

Then there is how co-op play is handled. Rather than simply just choosing ‘co-op play’ from the main menu, you have to instead wait until you obtain at least one follower in single-player and then the other player takes control of that character for as long as you host them in your game session and have them in your PSN friends list.

Though resource management is handled well in co-op; items produced by players in this mode create two of everything, the clunky nature of accessing the mode itself combined with the lack of long-term incentive for that extra player, both add up to a co-op mode which ends up serving as more of a distraction rather than a meaningful addition to the game.

Another troublesome aspect of the game is the plot. Though it is marginally expounded on within overly brief, dream-like cut scenes which occasionally trigger when you sleep, and from the tales of the survivors that you rescue, it’s difficult to truly immerse yourself in it because the game simply takes far too long to get going. Add in a smattering of odd glitches, where monsters get stuck in and behind the scenery, and it becomes clear that Fade to Silence needed a little longer time in the oven.

Finally, though you have a handy journal which doubles up as a tutorial of sorts, there will be things in Fade to Silence that just ‘happen’, without any kind of accompanying explanation. For example, after destroying a nest, I was able to free a wolf from its grasp – but the game never told me what the wolf was used for (I would later find out from a random crystal that I looted that they could be used to pull the sled mentioned earlier).

Fade to Silence then is an accomplished take on the sandbox survival genre that too often finds itself undone by its a shortcomings – which is a shame given the freshness and resolutely strong atmospherics that it injects into the genre.

Fade to Silence is out now on PS4, PC and Xbox One.

Lackluster combat and poorly explained mechanics aside undermine the fact that Fade to Silence is an often decently crafted survival sandbox effort that neatly dovetails Lovecraftian themes into its design to often surprising effect.