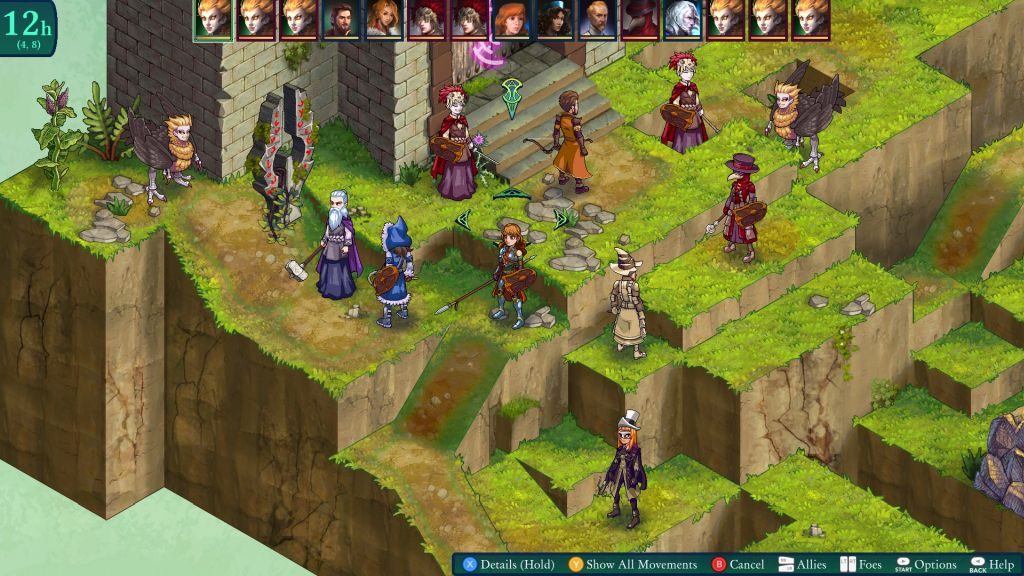 If you were to ask me what my favorite PS1 game of all time was, I would probably tell you that Konami’s Vandal Hearts was the absolute high note of the PS1 era. Call me a weirdo, but that’s my answer. Now, after all this time, Fell Seal: Arbiter’s Mark has arrived as a worth successor to my beloved Vandal Hearts.

Fell Seal: Arbiter’s Mark Is The Tactics Game You’ve Been Looking For

In its press materials, 6 Eyes Studio openly list Final Fantasy Tactics and Tactics Ogre as the primary influences behind Fell Seal: Arbiter’s Mark. But they aren’t fooling me – I can smell the delicious scent of Vandal Hearts wafting off of Fell Seal from a mile away.

Let me get this out of the way: if you are at all a fan of tactics-based RPGs, you should grab your controller, navigate directly to the PlayStation Store, and buy Fell Seal: Arbiter’s Mark immediately. Don’t even spare a moment’s thought. Squash any doubts you might have. Fell Seal is the pure goodness, and you need it – right now.

If you have been poking around the internet seeking info on Fell Seal, you might have come across the words “mature story” – a phrase used by the publisher to describe the framework for the game. Before you make the mistake of thinking that this is one of those games that is overly focused on hyper-violence or repeated examinations of the female anatomy, let me clear that up for you.

The world of Fell Seal is so well developed that I actually paid attention during the opening cinematic – a part of fantasy games that normally inspires me to stare at the wall and pick at my toes. None of the common RPG story tropes make an appearance here – and the lack of amnesiac heroes and kidnapped princesses is welcome and refreshing.

The backstory in Fell Seal is instead unique and interesting. Fell Seals’ world is kept in line under the influence of the Immortals – a council of ancient leaders that long ago established law and order during a period of chaos. The will of the Immortals is carried out on a day to day basis by Arbiters, roaming policing agents that enforce the law in the world as judge, jury and executioner. Picture fantasy versions of Judge Dredd, and you get the idea.

Despite their titles, the Immortals are not really immortal – just very long-lived. Occasionally one of the Immortal council decides to retire. These announcements send the world into a period of instability and upheaval, as the remaining Immortals name champions – known as the “Marked” – who all attempt to complete the same series of quests to become the next Immortal. Once a person is designated as “Marked”, they are considered above the law. Any actions they take are not punishable by Arbiters, and as a result they all kinda run around the world causing a ruckus and bumping each other off in their quest to become the next Immortal.

The opening of the game finds a small team of Arbiters transporting a wretched noble to a nearby prison to await punishment for murder (the Arbiters don’t just execute everyone arbitrarily). Upon arriving, they find that their prisoner is immediately set free – named as one of the Marked when an Immortal declares his impending retirement.

With the bitter taste of injustice in their mouths, the small band of heroes sets out to follow this new Marked through the land as he sets about his quest to become the next Immortal. If they can’t bring him to justice, they are at least going to mitigate some of the chaos he is about to cause.

Revealing any more about the story in Fell Seal would be doing a disservice to players. The twists and turns the narrative goes through are surprisingly engaging, and the characters are consistent and well defined. Proceeding through the game, I found myself as interested in the story as I was in the battle system – and that is saying quite a lot.

So – The Characters Are Cool?

The battle and character systems in Fell Seal are a masterwork of design – at once both ridiculously deep and immediately accessible. I can’t imagine the complicated spreadsheet that the devs must have employed as they worked through all of the various available jobs and powers, cross-referencing them with each other and navigating how the whole game clicked together. But click together it does – like a shiny new Lego kit.

At the beginning of the game, players start with a few named characters that inhabit a few of the standard RPG jobs (knight, scoundrel, warrior). Very quickly, the player is shown to the Guild shop, where new characters can be created and granted jobs to finish filling out the roster (black magic user, healer, ranger).

In a great bit of user-friendly functionality, these newly created characters – which are fairly customizable in appearance – can be created at higher levels for a bit of extra coin. This means that if you want a level 7 ranger, you simply have to grind a battle or two to work up the cash and buy one.

In addition to their primary job, each character also has a sub-job that can be equipped. I quickly found myself in a cadence where I would create a character with a job – a healer for example – then spend time maxing out that job and obtaining all the available powers. Then I would move that fully powered job into the sub-job slot – with all of its powers intact – and start grinding out a new job.

Through this dynamic, you can create awesome hybrid characters and roll into battle with a team of badasses. Want a black magic user that can also wield a crossbow? Fine. Want a healer that blasts enemies in the head with a sledge hammer? Also fine. How about an axe-wielding maniac that can also cast AOE elemental attacks? It can be yours with a little bit of planning.

As each character levels up certain jobs, more jobs are unlocked. Open the fifth power of the healer job, for example, and the plague doctor becomes available. Then the question becomes whether to continue leveling up the healer powers for the really top-end stuff, or make the switch to the sexy new job.

What About The Battle System?

The battles themselves are fought on a standard tactics grid, with each character’s movement and attack range dictated by their individual stats. Of course, there’s a ton of equipment to be purchased, crafted or looted that can influence these stats, which adds an additional layer to the strategy.

Each map is carefully designed with a ton of verticality to factor into your plans. There are ladders to climb, hills to mount, and secret portals to other areas of the map. Interestingly, Fell Seal ignores “line of sight”, allowing characters to shoot right through walls and obstacles, so long as the target is within their range.

A variety of difficulty options are available – and if you are finding a particular battle too difficult, you can always go grind out a battle or two on a previous map to boost your stats. Each map has a primary, story-driven battle that plays out when you first arrive, but after that you can take on randoms to your hearts content. This is one of those games that lets you create a team of impervious superheroes if you have the desire and the patience (and I do).

While I do love Fell Seal enough to declare it in the all-time tactics game hall of fame, there is one small quibble that I would love to see addressed in the inevitable and well-deserved sequel. While I understand – due to budgetary constraints – why players can’t rotate the field of play, I would love to be able to do so.

But beyond that one minor gripe, I gotta say that Fell Seal is just about perfect in my book. I haven’t fallen into a tactics game as deeply as this one for 23 years, and that has been a long drought. Sure, there have been some good games – even great games – in the genre since Vandal Hearts, but none that have tickled my brain in quite the same way until Fell Seal came along.

With a great, intriguing story aimed at adults (but not inappropriate for kids) and a fantastic stable of characters and jobs, Fell Seal is the sort of game that lets you dive in and play around with its systems in any way you like. Clearly crafted with love for the genre, and with almost intimidating longevity, Fell Seal: Arbiter’s Mark is the heir apparent to the tactics-RPG throne.