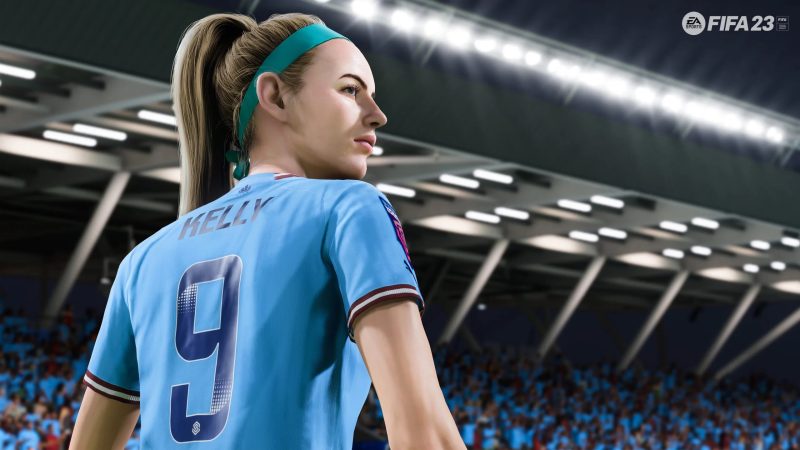 FIFA 23 PS5 Review. The EA and FIFA partnership has one final fling. Is it an emotional farewell? Or is it good riddance? Find out in our full FIFA 23 verdict below.

And so, having lost PES in name (and in spirit to some degree), an era truly ends as EA’s FIFA series takes its final bow as well. In both cases, the underlying game did and will live on, but these are long-established buzzwords in gaming spaces. ‘PES or FIFA?’ is the football game equivalent of ‘Sonic or Mario?’ and now, it’s about to be over with less appealing rebrands.

Back On The Pitch

It wouldn’t be a surprise if FIFA 23 ended up feeling a little conflicted given the fractured partnership that’s coming to an end, and while that’s true in a way, it’s less to do with a name on the marquee and more to do with the things EA just won’t let go of. 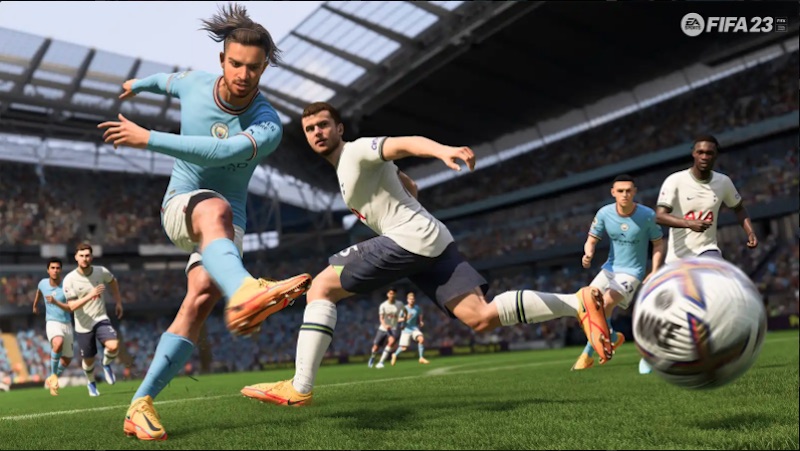 In theory, a chance to break from the FIFA name and reboot the long-running franchise would be a superb plan, and much-needed. The flip side of that is that FIFA makes so, so much money in the mode that ultimately stifles its potential progress the most. Ultimate Team remains EA’s most lucrative moneypig, and a chokehold on any evolution its sports games could possibly have.

You can see that most in how FIFA 23 plays in anything outside that mode. Career mode remains almost exactly the same as it has for years, and while that would be ok if the baseline had been higher, it’s never been an essential part of FIFA. Furthermore, at a time where no other football game is out there with a big single-player campaign, it feels especially wasteful to have the same old chuff again this year.

Even the inclusion of women’s leagues would have been a significant change, but that part of the game is still strangely isolated from Ultimate Team and Career despite gaining parity on the box art.

The Beautiful Game Plays At A Faster Pace With Fluid Animations

Of course, there’s the usual selection of hype phrases concerning the gameplay and the latest iterations on an established formula. In fairness, this year does see something of an improvement on the field. Things move at a bit of a quicker pace in FIFA 23, and that’s a blessing because there was far too much baggage in FIFA 22’s play that made building it absolute torture when using anything but the best squads in the world. 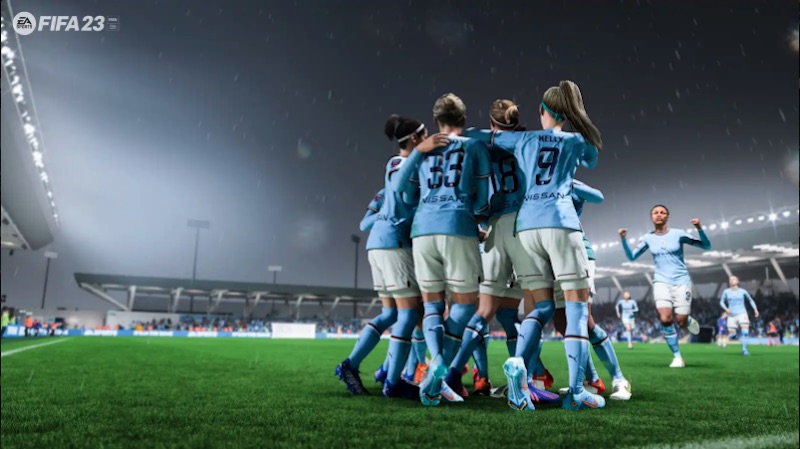 The animation has a clearer fluidity, which prevents a lot of sluggish, slow response play – not that it’s entirely gone, mind. There are still bizarre moments where players hit an unseen tar pit, entirely localised beneath their feet, and give away possession. If you’re lucky, that doesn’t end up costing you, but I assure you…it cost me on several occasions.

Defending has been fine-tuned from FIFA 22, but it still feels far looser than attacking. It’s still quite remarkable how many games where a clean sheet is kept are a result of little more than non-stop attack and/or if the EA Gods decide your keeper is going to have the reflexes of Neo in The Matrix or those of a drunk Inspector Gadget on that day.

Scripting in eFootball has become more prominent than it ever was in PES, but FIFA has long been unabashed when it comes to dropping a scripted twist of the knife one way or the other. It means that the inherent issues of attack or defense are accentuated by these little ‘surprises’.

Every year some form of these issues crops up, causes the fanbase to scream about it being ‘too fast,’ ‘too slow,’ ‘too scripted,’ ‘too much the same,’ ‘too different’ and all the rest. Part of that is the natural way of things with any popular game.

It’s FIFA, Warts And All

The non-problems of a privileged few echoed into the community. But as with something like Call of Duty or Fortnite, many people are chasing an unobtainable dragon of a nostalgia that’s never been allowed to settle in the way any popular franchise with several years between entries do. 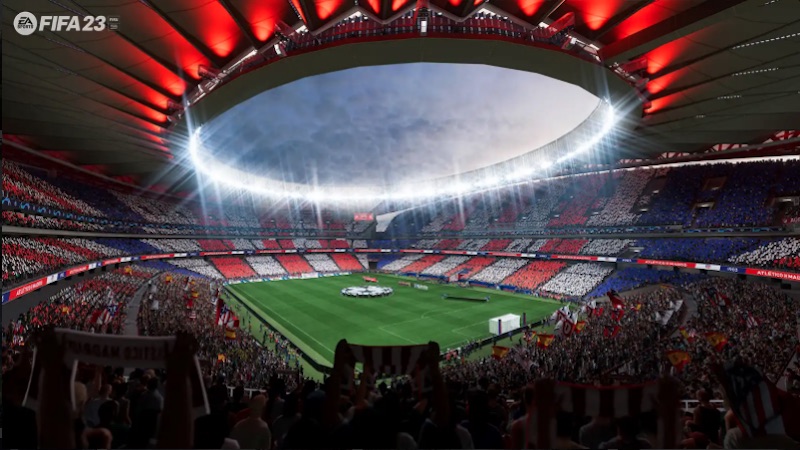 We grow up and away from what we were when introduced to something, and it’s impossible to capture the core fresh joy of those early days. At best you can squeeze some comforting drops of remembered happiness out of it over an absurd amount of hours.

Believe me, I’ve put 240 hours into Konami’s eFootball in the hope of capturing just a shred of that joy PES brought me and even though I should know better that it isn’t there yet, and may never be, I still continue on.

I’ve been coming back to FIFA pretty much every year since the inaugural game, always seeking out that missing something in it that’s grown more and more distant as Ultimate Team’s grip on it has grown tighter.

So, I try to look at FIFA now, at its ‘end’ before the upcoming rebrand, with an acceptance of what it is, and what it’s never going to be. What FIFA manages every year without fail is to be a spectacle. The glossy Sky Sports vision of football where rivalries are talked up, the biggest players fawned over and the spectacular highlighted. In many ways, FIFA is akin to watching a skills video of a player your club is interested in.

Everything you want it to be is pushed up front and condensed into a deceptively pleasing package. It’s when you dig a bit deeper that you find out that for all the rabonas and iconic celebrations, there’s no footage of the time it froze mid-game and let the opposition nab an unexpected late winner. 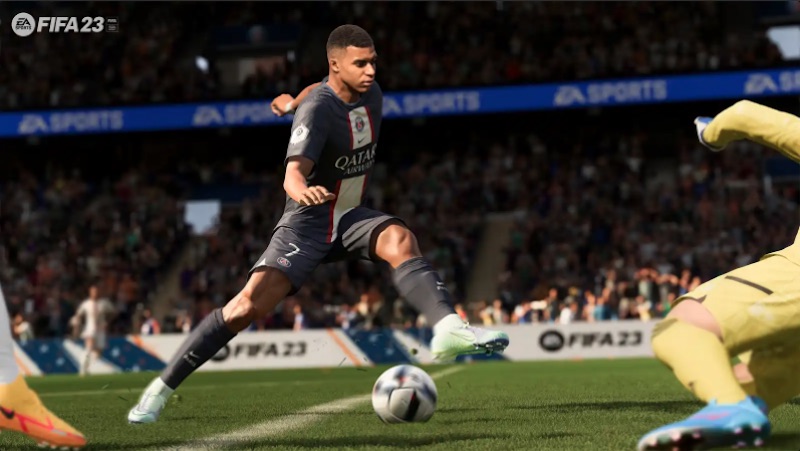 It’s a franchise that’s consistently struggled to get the way football actually plays right, and again, I feel it’s the direction EA has taken the business model that has prevented true progression on that front.

Sure, it looks the real deal thanks to a no-doubt staggering budget for performance capture and all the official branding slapped on top, but to this day, there’s rarely been a time I’ve felt I’ve beaten the A.I. or a human opponent with just tactics and skill, instead of some grand algorithm that can’t stop putting its oar in.

FIFA 23 is fine. Good in many ways in fact. It does enough to keep me engaged in what I like to do such as Career and Volta, but the main selling point of the past decade or so really doesn’t do anything for me these days. No doubt that will still be a humongous part of whatever EA rebrands FIFA to next year. I just hope that EA will use this opportunity to grow other areas of its football package.

One of sports gaming’s longest partnerships ends with a shrug of the shoulders. FIFA 23, positively and negatively, doesn’t feel like the end of an era. That’s mostly because it’s hard to see EA revolutionizing the underlying formula after the FIFA license has departed. All in all, FIFA 23 is a solid football spectacle with the same old woes.