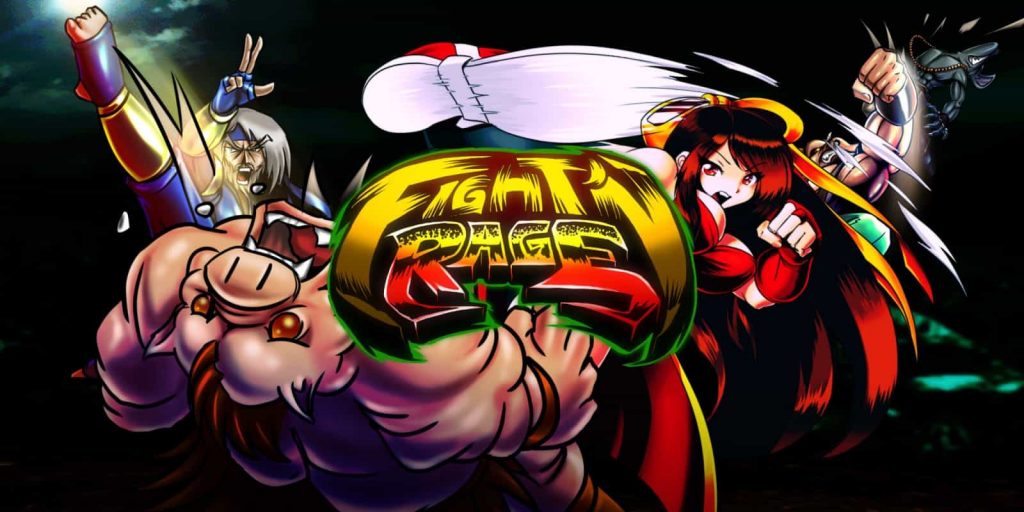 The latest in what would seem to be a modernised deluge of side-scrolling battlers, Fight’N Rage would, on the surface at least, appear to be something of a mish-mash, a Frankenstein if you will of various genre influences. It looks like someone high on LSD with a pixel-art brush has fashioned the game’s visuals, while beneath that veneer, Fight’N Rage liberally bleeds everything from the likes of Double Dragon and Final Fight through to, well, Battletoads (I’m not joking). Even the name ‘Fight’N Rage’ comes across as strangely generic and yet, despite this outwardly misshapen chimera of a game, Fight’N Rage is actually good. It’s actually really good, in fact.

From the jump, Fight’N Rage leaves you in no illusion as to the slavish adoration it has for not just the side scrolling brawlers of old, but the arcade hardware of yore that supported them too. Once into the game proper, players peer through a 90’s, CRT arcade styled oculus as the action unfolds, and while such an enthusiastic embrace of this sort of thing comes across as a touch overdone in other games, here it feels (and more importantly looks), just right.

After picking from one of a small handful of characters, players are thrust into the story campaign of Fight’N Rage, and while there’s some surface nonsense about a stolen girlfriend or something (I couldn’t give a flying toss, honestly), it all serves as a wafer-thin backdrop for the game’s fistic confrontations to unfold against. And unfold the action does, oh boy.

Moving from left to right, Fight’N Rage follows the genre template of smashing everything in the face that looks remotely hostile as hard as you possibly can and as frequently as you can possibly can with whatever happens to be at your disposal. From punches, kicks, throws, special moves and of course a litany of weapons to use, Fight’N Rage’s particular brand of ultraviolence will prove warmly familiar to anyone who has been lovingly weened on the likes of Final Fight and Streets of Rage in their formative years.

There’s a wonderful, potato chip style audible crunch to combat too which keeps things eminently satisfying as fists smash faces, well-timed heel strikes spin folks into the air and faces get smashed against the edges of the screen with blissfully entertaining aplomb.

The enemies that you’ll face are a varied lot too. From knife carrying rats, to massive pro-wrestling cats and dive bombing vampire bats and much, much more besides, Fight’N Rage’s fantastical line-up of bad dudes for you to ruin makes a pleasant, if eccentric change from the usual murderer’s row of tattooed thugs and sunglasses adorning goons. Where Fight’N Rage scuppers itself a tad is in the stages themselves. Though interesting and varied with secret rooms and non-linear pathways, none of them are especially memorable and kind of congeal into one great big, scanline infested mess of locations that fail to ultimately inspire.

Faring much better is the tweaks to the brawling formula that Fight’N Rage brings to the table. Chiefly, Fight’N Rage has been tailored for speedrunning to the point that it has full speedrunning metrics in operation from the second you hit the ground in the very first stage. Functioning on a deeper level, Fight’N Rage provides a mechanic that only 2020’s Streets of Rage 4 is making a big deal about – the ability to juggle your foes as a key gameplay element.

You see, in Fight’N Rage you can inflict fantastically devastating amounts of damage on your enemies by not only juggling them but by doing so against the edge of the screen, and if you’re successful in doing it, you can defeat them extremely quickly by trapping them in this way (they literally explode in a shower of oddly shaped bones and skulls). As a result, this plays directly into Fight’N Rage’s speedrunning ambitious quite nicely indeed alongside all the usual genre beats.

Beyond what is already something of a challenging affair, Fight’N Rage bolsters itself with a neat unlocking system that provides more than ample incentive for you to keep plugging away (well, punching away really), as credits awarded on each run can be spent on unlocking new costumes and new fighters for you (and your friends) to control.

And so this is Fight’N Rage; an often messy cornucopia of scrolling brawler classical influences all congealed together with a blackly efficient speedrunning heart that relentlessly pumps violent satisfaction into the eyes and hands of all that play. It’s surprisingly deep and wholly entertaining, so if you’re fan of moving from left to right and kicking the crap out of things, then you really cannot go too far wrong with Fight’N Rage.

Fight’N Rage is out now on PS4, Xbox One, PC and Nintendo Switch.