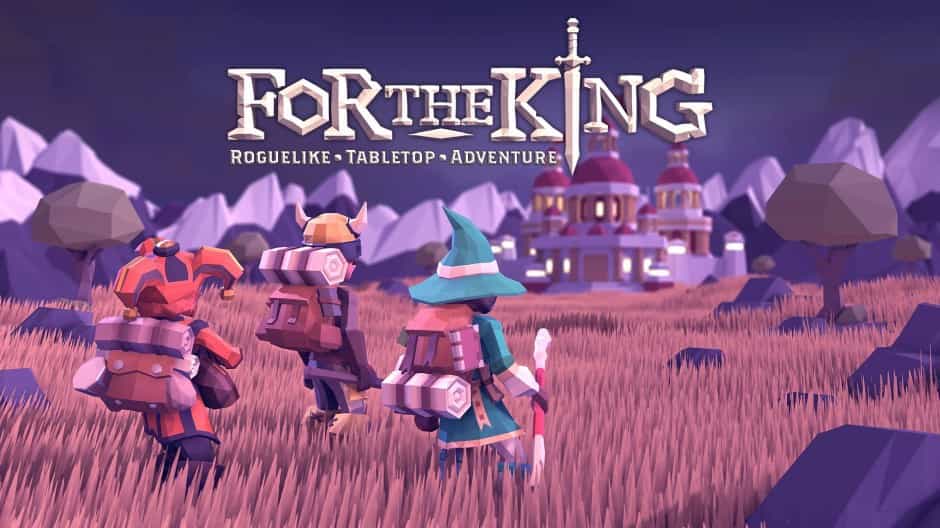 Effectively a board game made pixel, For The King bears a strong resemblance to the grossly underrated Armello – a title which aimed and largely succeeded in combining strategy, RPG and tabletop mechanics to compelling effect.

By embracing a blend of tabletop, adventure and rogue-like elements, For The King accomplishes the same feat; though somewhat unlike Armello, it presents a much more challenging experience by contrast.

For The King is a deep, engrossing tabletop experience

For The King begins largely how you might expect – the King is dead (Kings tend to be rarely anything else in videogames these days it seems) and the Queen has put a call to arms which a merry band of adventurers have answered in earnest. Though hardly earth shattering from a plot perspective, the story setup, as thin as it is, serves only as a functional backdrop to the methodically paced, tactical board game beats around which the rest of For The King revolves around.

With a choice of multiple classes in Blacksmith, Scholar, Hunter and Minstrel that each have their own gear, abilities, strengths and weaknesses, players are then able to get stuck straight into the main campaign called ‘For The King’ (yes, I know), or if they’re an experienced sort, any of the five additional expansion campaigns can also be tackled – though they do scale up in difficulty pretty savagely.

Once into the game itself, For The King takes in an elevated third-person perspective that showcases the game world at large – a colourful patchwork of interlinked hexagonal tiles that in turn give the impression that For The King’s world is in fact one great big board game. This is obviously deliberate because, well, that’s exactly what For The King strives to be.

As is befitting its board game inspirations, For The King is a turn-based affair where players move as many spaces around the board as they can (each class has a set amount of moves they can make), interact with key locations such as townships, fight monsters and much more besides. Also like a board game, For The King is governed by a strict set of rules that parametrise everything from movement and combat, through to loot, the economy and more besides, which means that once you’ve gotten the hang of it, game sessions trundle along quite nicely.

Speaking of combat, For The King acquits itself as you would expect. Combat is turn-based and each character in the party that happens to be present at the on the tile which is being attacked, gets a turn to attack the enemy, choosing from a wide range of abilities, items and attack types. Likewise, For The King has no shortage of different enemy types for you and your brave party to tangle with either – chucking all manner of goblins, orcs, bandits, sea creatures and more that all all have their own strengths, weaknesses, immunities and elemental affinities.

Something else that is true about For The King is just how difficult it is, and that difficulty is nowhere better exemplified than in the combat. Though approachably accessible and pleasantly deep, the combat in For The King sometimes falls unfairly victim to the RNG monster – as it is entirely possible to be fighting a foe of equivalent level and have your attacks miss consecutively. To say that this becomes aggravating in a game where a party wipe effectively means game over, would be quite the understatement.

Unfortunately, the gnarled, evil fingers of negative RNG stretch further than just the combat. At the beating heart of For The King is a randomised event system which acts as the lynchpin to many of its quests – the problem however, is that the equipment and gear that you need to progress through certain quests is not only rare to discover, but there is a time limit to discover it in the first place.

And this is the thing – For The King is, unabashedly, a true board game made pixel in every sense. This means that like the real thing, you are entirely at the mercy of the dice and while the deck isn’t always stacked against you, this is most certainly a game where a poor outcome is much more likely than a favorable one, and if you want to enjoy everything that For The King has to offer, you need to make peace with that.

Additionally, you can also make things quite difficult for yourself simply by not exercising much common sense. Moving around the game world for instance can prove perilous if you have split your group apart, while failing to take advantage of easier quests and the rewards that they offer, can also see your group set in poor stead for the increasingly difficult challenges to come. For The King then, does not forgive the tactically clumsy. At all.

Despite For The King’s high difficulty and propensity for often frustrating flirtations with punishing RNG, it nonetheless remains a steadfastly, value-stuffed proposition as it includes all five expansions that were released for the game after its PC debut in April 2018. From the frigid wastes of the Frost Adventure expansion to the swashbuckling, sea-creature combat of the Into the Deep expansion, For The King certainly provides ample bang for your buck as each expansion provides new gear, monsters, quests and environments to get stuck into.

Like the humble board game from which it draws such clear inspiration, For The King is most certainly best when played with friends and with this in mind, some of the expansions deftly exploit this fact, boasting competitive multiplayer modes and a range of challenges that can only really be done with human friends that are either sat right next you, or situated in their own comfort zones across the world.

Then there is the audiovisual presentation of For The King. With a highly stylish and vivid flat-shaded visual veneer, For The King’s various landscapes and character models are lent a really solid kind of physical presence that echoes the likes of similarly styled games such as Human Fall Flat, for example. Then there is the soundtrack which though understated, is likeable enough fantasy fare that it neatly backs up the on-screen action with aplomb.

Akin to an evening spent sitting around a table with friends that is in turn generously crowded with snacks, boards, tiles and dice, For The King does a grand job of invoking the social experiences that boardgaming has provided for so long. Though frequently troubled by the RNG monster, For The King remains an offering that is best enjoyed with friends and that includes everything from your best successes to your worst failures. Methodical and stuffed with content, For The King represents something a little different from the norm – so give it a shot, eh?

For The King is out now on PS4.

Though RNG issues can render it punishing and solo play is not hugely captivating, For The King nonetheless states a decent case for itself as a tactical, fantasy multiplayer board game that everybody can enjoy. Get the snacks in, get the friends in and away you go.