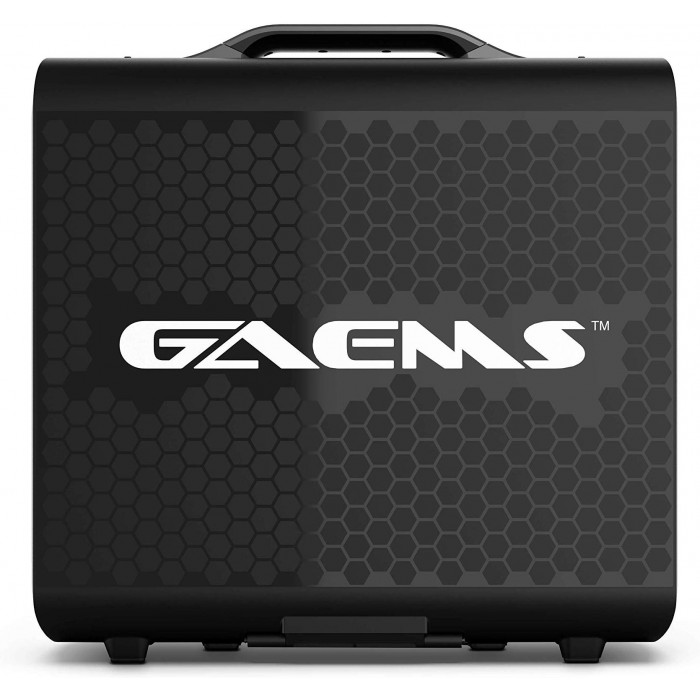 Packing up your console and bringing it on the move can be an almighty pain in the backside if you’re a frequent traveler. What the GAEMS Sentinel Pro XP aims to do is make things much easier with an all-in-one portable solution complete with monitor and speakers that enables you to set-up quickly and get gaming.

At first glance, the Sentinel looks like a sturdy briefcase, measuring 16.90 x 4.20 x 16.70-inches. Decked out in a glossy jet-black colour and featuring a subtle hexagonal design on its front – alongside the white GAEMS logo – the hard-shell case also has a kickstand.

You can flip this stand down so that when you open the case it provides support and stability for the monitor inside. Overall, it’s an imposing and impressive-looking case with a hard-shell that should help protect your console if you were to inadvertently drop it. It’s also not going to accidentally open up on its own thanks to the dual-locking mechanism which requires you to push two locks open at the same time on either side of the handle.

It’s also worth mentioning that it feels comfortable to carry thanks to the top handle which extends slightly when you grab it.

On the other side of the case, alongside the game logo, you’ll also find rubber grips in each corner, which do a good job at ensuring that the base of the case doesn’t slide around when you start gaming.

Providing you’ve got access to a plug socket, you can use the Pro XP anywhere.

Flip the case open, and that’s when the magic happens. The Sentinel XP Pro immediately greets you with its 17.3-inch monitor, which can display your games in full HD 1080p with a 60Hz refresh rate. There’s also a soft EVO foam inlay where you can place your console without fear of it getting scratched, and two Velcro straps so that you can use to strap it down for stability when transporting it.

The Sentinel Pro is compatible with any console, but its size makes it perfect for the likes of PS4, PS4 Pro, Xbox One X, Xbox One S, which will all fit in snugly. We also tried it out with a Nintendo Switch, and although the size of the case’s interior and the size of the straps means that you can’t secure it well for transportation, the monitor works just as efficiently.

Underneath the monitor are numerous buttons allowing you to tweak the settings, such as volume and brightness, but you can also access the main menu for the monitor to go a little more in-depth.

Like most standard monitors, from within the menu you can access different modes such as “Movie” and “Gaming”, but also adjust things for your preferred set-up. This includes the likes of contrast, sharpness, gamma and saturation.

The buttons are also back-lit, which adds a bit of style and ensures you can see them well enough in a dark-lit environment.

As well as being able to access these settings directly from the button under the monitor, there’s also an IR remote control that comes with the Sentinel.

Directly under these buttons you’ll find the two headphone jacks, the HDMI socket and the power jack for connecting the monitor to a plug socket.

On the bottom left and right-hand side of the monitor are the speaker chambers.

Setting Up The Sentinel Pro XP

The GAEMS Sentinel Pro XP comes with a small HDMI lead that runs from the back of your console into the monitor. It’s the perfect size as it runs exactly from the back of the console to the HDMI port, so there’s no extra cable intruding on your gaming set-up.

In order to get set-up, you’ll need your console – in our case the PS4 Pro – the power supply for your console, the HDMI lead, and the included 12V DC power supply that powers up your monitor. Plug these all in, and you’ll be up and running in seconds.

We first tested the monitor out with Spider-Man. The monitor immediately detected the best resolution for the game and within minutes we were swinging around Manhattan in 1080p (1920 x 1080) with no noticeable difference from our main TV set-up. The image is sharp, the colors pop from the screen and the anti-glare matte finish ensures that you don’t catch any annoying reflections.

The sound quality from the monitor is decent too considering its portable nature. It’s extremely likely that you’ll be sitting fairly close to the monitor, so although the sound doesn’t blast out at the kind of volumes or with the kind of bass that you’d get from a heavier sound system, the 3W stereo speakers provide an ample audio experience to compliment the visuals.

Underneath the monitor, you also benefit from two 3.5mm jacks, which means that two players can plug in a headset and enjoy a much more immersive experience.

With a rather hefty $349 price tag, the Sentinel Pro XP is going to appeal largely to frequent travelers. Though you can pick up a 17-inch monitor for much cheaper, the overall portability of the Sentinel Pro when combined with your console as an all-in-one solution makes it a very attractive prospect.

Noticeably, one thing that’s missing from the Sentinel, which would have been handy, is extra storage space to fit some games, controllers or your power supplies. This isn’t the case. Instead, GAEMS has provided a bag so that you can carry these required items in, which can be strapped to the handle of the case. But, even then the bag is a little small, so if you’re playing on bringing multiple controllers and multiple games with you, then be mindful you’ll have to cart those around separately.

The manufacturer has, however, recently revealed The Guardian. This next case, which doesn’t yet have a release date, will feature a 24-inch (2560 x 1440) WQHD monitor and include some space down the sides for your peripherals and necessary leads. However, it will set you back $700.

That one gripe aside, GAEMS has come up with an excellent solution for portable gaming. The design and sturdiness of the case fills you with confidence that you can bring your console safely and securely on your travels, while the simple set-up and crisp visuals provided by the monitor means that you can enjoy top quality gaming within minutes.

Disclaimer: GAEMS provided PlayStation Universe with the Sentinel Pro XP for the purpose of this review, though all opinions are our own.

Though a bit on the pricey side, and lacking some extra storage space, the Sentinel Pro XP is an impressive piece of kit. From the sturdy case and its portability to the slick visuals from the 1080p monitor and easy set-up, it's a top-class solution to gaming on the go.