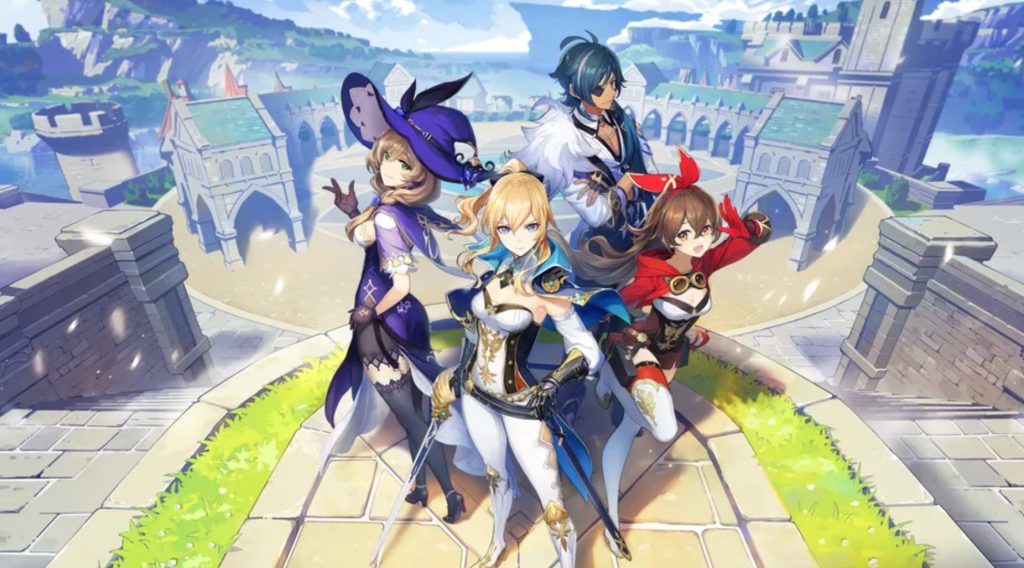 The story follows two twins, a young boy or girl as they are transported to a magical new world after being defeated by a power mage. You get to select which of the two you chose to play with as you embark on a journey to either find your brother or sister. While trapped in this new world you befriend a flying pixie-like creature named Piamon who accompanies you on your quest.

It’s not soon after embarking on the journey to find your missing sibling that you are thrust into the politics and dangers of this new world. A powerful dragon is threatening the land and you join a group of variously skilled warriors to stop the dragon Stormbringer from destroying the city of Mondstadt. Genshin Impact has a big story to tell with plenty of characters and locations to visit. The story is fully voiced with some great cutscenes. It’s quite impressive just how much effort went into the game’s narrative aspects, something that most free to play games simply just ignore especially after its initial release.

Visually Stunning In Every Way

The first thing that stands out to anyone who starts up Genshin Impact is just how stunning the game looks with Genshin Impact drawing inspiration from the visual style of Nintendo’s The Legend of Zelda: Breath of the Wild. The vast landscapes of Teyvat just take your breath away with vibrant colors throughout. I can’t count how many times I stopped just to look and take in the game’s visuals.

What’s more impressive is that everything is designed to scale. When you approach the city of Mondstadt there aren’t any loading times to enter the city, you just simply enter through the main gate, visit any shops, and continue on your quest. There are loading times when you enter specific buildings and when you fast travel but for the most part, you can play without any interruptions.

The open world of Genshin Impact is a blast to explore. Having the ability to climb any surface and glide through the world means there is no place in the game world you can’t reach. There are so many hidden locations with hidden treasure chests and challenges; I couldn’t go five minutes of exploration without finding something new to find or collect. When there are loading times they are inconsistent. When fast travelling, these load times are short, but for some reason when entering a dungeon or any indoor location the loading takes a bit longer. Loading times are also the longest on the PS4. Having tested the game on my PC and on my mobile device. The PS4 load times are the longest out of the three.

Combat is another shining point in Genshin Impact. Its no surprise as miHoYo has created some great combat in their past titles. Combat is action-based and each character has their own combat style and animations. It is also a mix of melee attacks and elemental magic. You pull off combos by tapping the circle button but you also have access to elemental attacks that affect not only the enemy but the environment as well. The elements are the focal point of combat and so many of the strategic elements rely on elements and combining them to find the weaknesses of your enemies.

Each character comes with their own elemental mastery. Elements consist of: Anemo (Wind), Geo (Earth), Electro (Lightning), Dendro (Nature), Hydro (Water), Pyro (Fire), and Cryo (Frost). Using these elements during combat is essential to victory. Sure, you can simply use Cryo elemental attacks against a Pyro enemy to quickly gain the advantage but it’s the combinations of those elements and the environment that can really cause the most damage. When hitting an enemy with a specific element they become affected by that element. This appears visually on the characters and the elemental icon will appear over their head.

This becomes important when combining different elements as doing so will give the most damage output which is important against some of the bigger bosses. One example of elemental combos involves inflicting an enemy with Pyro, then with Electro. When the enemy has both elements inflicted on them switching to an Anemo character you can hit them with a wind attack that combines all three elements for essentially triple damage. Launching a wind-based magical attack gives a visual effect that sees wind effects combine with Pyro and Electro to show off all three elements are now part of the one single attack.

The environment also plays a big role. When facing off against enemies in water, Pyro becomes ineffective. Instead, using Electro will spread the damage through the water to multiple enemies. Using Cryo will actually freeze enemies for a short time and also freezes the water allowing you to walk over it rather than swimming through it. The elements are also used to solve the various puzzles in the game world. Some puzzles have you activating pedestals with specific powers or clearing out obstacles to create a path such as giant tree vines that block your path.

If you’ve ever played a free to play game you’ll know that they feature a ton of resources. There are so many sometimes that it becomes overly confusing with what they are used for until hours and hours into the game. Genshin Impact falls into the same problem as so many before it have. The game simply has too many resources to keep track of.

A lot of these resources are mostly crafting materials to build new weapons or to upgrade your existing weapons and characters. Each weapon and character works the same way when it comes to leveling them up. Characters can easily be leveled using adventure books, an item that gives them a good EXP boost. Weapons are leveled by using other weapons as experience boosts. The higher the rarity of the weapon the more EXP it will provide.

Once you reach level 20 with either a character or a weapon you have to use Ascension to break past the level 20 cap. Ascension requires rare materials that you have to either acquire from some dangerous enemies as a loot drop or you can buy using a rare resource you acquire from completing quests.

Artifacts are other pieces of equipment that can increase various stats such as your Hit Points by a certain percentage. You can also equip a full set of artifacts, which provide you with great passive boosts, like healing yourself after each defeated enemy.

Content is something I mentioned earlier in my review so let me delve into it a little bit. It’s not just about completing story quests or side quests, there are plenty of other things you can do to acquire materials and more importantly level up your Adventure Rank. When you complete any sort of task in the open world, you’ll get Adventure Rank EXP.

Early in the game, you get the Adventure Handbook. This Handbook provides you with four daily Commissions you can complete. There are also World Bosses to tackle, which provide Ascension materials, and various other tasks like opening up a certain amount of treasure chests or crafting a specific item. Completing any of the tasks in the Adventure Handbook will increase your Adventure Rank but completing tasks just by exploring helps out just as much. Simply finding treasure chests, activating fast travel points, solving puzzles, and discovering new dungeons all increase your Adventure Rank. Once you reach a specific rank, the world level will increase which makes the enemies level up on the maps and spawns better rewards and materials to find.

Multiplayer Is Held Back With Very Limited Co-Op Content

For those looking to play online with their friends may be disappointed when they first start up Genshin Impact. Online Co-Op doesn’t unlock until you reach Adventure Rank 16. Once this happens you can play with all your friends between PS4, PC, and Mobile using cross-play. Co-op unfortunately doesn’t provide enough content to do together.

Yes, your friends can join you in your open world but you can’t complete story or character quests together. Only the host player can open chests and collect rewards from them. The only content that benefits all players in co-op is Commission Missions, World Bosses, random map events, Domains (short mini-dungeons), and Laylines. Domains are short dungeons that take no longer than 15 minutes to complete and Laylines are missions that see you face off against waves of enemies and awaken a Layline flower that drops unique materials.

I should mention that Genshin Impact is also a Gotcha Game. Though most of the game’s characters are unlocked through the story, you can make a wish and try and summon new characters to join your party. The drop rates for the five-star characters are about 1% so chances of getting them are pretty low. Though the resources required to make wishes take time to get, there are plenty of options to acquire that resource or you can spend real money to buy it. But, effectively you are essentially spending money on a 1% chance of getting what you want.

Wishes are very easy to earn and acquire and whilst it’s great to get a five-star character, they are not a requirement for you to be able to achieve everything in the game as it can all be completed with your standard story provided characters.

The PS4 version of Genshin Impact unfortunately does suffer from some minor bugs. The biggest one comes from a sound glitch where all the games sound just stops working. It’s easily fixed thankfully by simply fast travelling somewhere else or enter a dungeon. Essentially anything that makes the game go into a loading screen. The other issues I ran into were that I saw my character stop running and go into a walking animation occasionally when I would turn to run in a different direction and another issue where there is about a second delay for the prompt to appear to pick up items.

These aren’t a big deal seeing as the sound issue is easily fixed and being delayed in picking up items is only a problem if you are trying to grab items while running.

A Model Free To Play Game That Others Needs To Follow

Genshin Impact is the most accessible free to play game on the market. I just wasn’t expecting myself to enjoy it as much as I do. From its story, combat, and exploration Genshin Impact provides a game for free that most would charge full price for. Genshin Impact is just a blast to play, it’s one of those games where no matter what you do in it, you feel like you’re being rewarded for doing it.

Genshin Impact drops you into a massive free to play open-world game with more content at launch than some games get through in three years. With an in-depth combat system and an intriguing customization system, there is just so much to keep you busy and more importantly committed from the start to what you’ll consider being the inevitable finish. I can see myself playing Genshin Impact for years if the developers continue to support the game at this level. Genshin Impact is a model in free to play games that other developers need to follow.

Genshin Impact is now available to download on PS4

Genshin Impact provides you with more content as a free to play game than most full-price titles do. With so much to offer, you can easily get lost in its lush world, fun and exciting combat, and deep exploration. Genshin impact is easily one of the best surprises of the year and should be a model for how future free-to-play titles should be constructed.