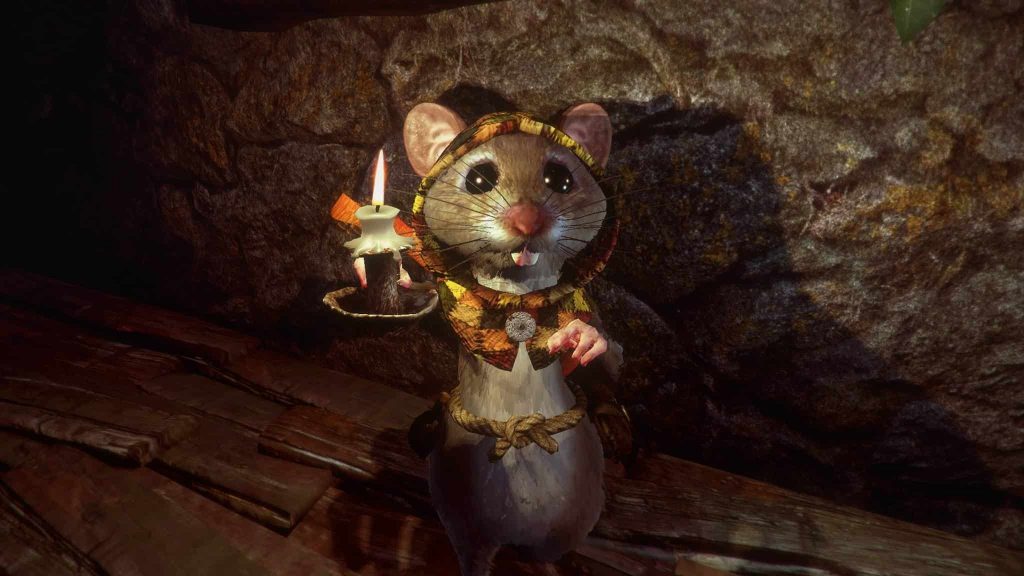 Like Tilo, the diminutive rodent protagonist of the game in which he stars, Ghost of a Tale emerged from humble beginnings. Funded by just over 1,000 folks on crowdfunding platform Indiegogo back in 2013 and effectively brought to life by just one person, it would take nearly six years for the game to finally complete its journey to PS4.

Now, in 2019, Ghost of a Tale has ascended beyond its uncertain, humble origin to something greater – an effervescently charming, third-person action adventure that PS4 players everywhere should take the time to enjoy.

Ghost of a Tale is heartwarming adventure, lovingly inspired by cinematic, literary and gaming greats

In a fantasy world populated solely by animals, players are cast as Tilo, a small rodent minstrel who finds himself separated from the love of his life Meera, and subsequently imprisoned within the dread walls of Dwindling Heights Keep. If you took one look at Ghost of a Tale and assumed an inspirational kinship with works such as The Secret of Nimh or the Redwall series, you’d be right – the game avidly wears such inspiration on its sleeves for all to see.

Equally, Ghost of a Tale’s design DNA also bears the imprint of inspiration as the game braids together influences from the likes of The Legend of Zelda and ICO to fashion a roundly compelling effort that combines stealth, RPG and adventure genre staples to great effect.

In the early part of his quest to locate and liberate his beloved Meera (and once he has managed to escape his jail cell of course), Tilo should avoid direct confrontation with the guards – being a small mouse (and a minstrel at that), Tilo isn’t very well equipped to deal with battle and so must find other solutions to getting by his much larger captors.

Usually a source of an unending frustration in games that do not implement the appropriate gameplay mechanics properly, the stealth in Ghost of a Tale isn’t just easy to deal with it is also *gasp* enjoyable, too. A handy detection indicator lets the player know just how close they are to being discovered, while the guards, which are fortunately written into the lore as a bunch of dunderheads, can be lost easily enough by scurrying away and finding a chest, basket or large pot to hide in so long as they don’t catch you in the act.

Furthermore, though Tilo is arguably more of a lover than a fighter, his options when dealing with the numerous guards and various hostile creatures that he comes across isn’t limited to just turning tail (sorry) and running, either. Wine bottles can be tossed at the exposed craniums of the rat guards to knock them out for a short while, allowing Tilo to pilfer their belongings in the process, while barrels can be dropped on top of heads for the same effect, oil can slick the ground causing your enemies to fall and Tilo himself can use sticks to create distractions in order to allow him to slink by.

I mean really, this is the most unexpected videogame take on Home Alone ever.

Thankfully, Tilo is a joy to control too – at a standard trot he happily potters around the environment and is minutely responsive to your direction. Conversely, hold the R2 button and he’ll stoop into a creep, while pressing down the L2 button will send him into a wonderfully animated, furious, all-fours sprint – which is useful for escaping from enemies, but also quickly drains your stamina in the process. Navigating the environment is a simple and satisfying affair too; a quick click of the circle button sends Tilo into a little leap whereupon he’ll pull himself up onto nearby surfaces with ease.

When Tilo isn’t incapacitating or otherwise finding a way to creatively sneak past his enemies, he’ll be spending a great deal of time doing quests, and its here that Ghost of a Tale really begins to unfurl itself and reveal to the player just how deep it really is. Not everyone in the world is out to get Tilo – quite to the contrary, our little minstrel mouse will encounter many folks who for one reason or another want to help him, the thing is, each character has their own reasons for helping Tilo and it’s through conversation and completing quests that players can discover just what those are.

Quests also feed directly into the experience system that Ghost of a Tale uses. While the game doesn’t leverage arbitrary ability trees to dictate and measure progression, it does use a traditional leveling system which provides additional health and stamina for every new level gained through collecting experience point from completing quests, collecting items and finishing other objectives.

Speaking of objectives and quests, Ghost of a Tale adds an extra layer of intrigue to both of those by tying them into a full day and night cycle which dictates the manner in which they should be tackled. In one quest for instance, you are tasked with tracking down some beetles that have escaped from their pen, and while they are difficult to find during the day, at night they make a distinctive chirp which makes them easier to discover.

In another example, Tilo happens across Fatale, a thieving mouse who is having trouble sleeping. Through conversation, which is wittily well-written too I must say, he convinces her to allow him to play lullabies by her side at night until she falls asleep for three nights in a row, revealing her troubled past in the process – though obviously, Tilo must ensure he is there at the right time of day for this to occur. Likewise, the time of day also affects other things – some NPCs may only appear at certain times of the day and some guards alter their patrol route depending on what time it is, too.

Though progression in Ghost of a Tale sound simple, skills are still available (extra stamina, carrying capacity and so forth), and can be learned from certain key characters in the game, so there is still that incentive of learning cool new tricks; Ghost of a Tale just refuses to flood the screen with superfluous skill and ability screens, that’s all.

Though Tilo is a minstrel, it also turns out he’s something of a master of disguise too. Scattered around the keep are various parts of clothing that when assembled, create a complete disguise. The use of these disguises is two fold. On the one hand, each disguise piece that Tilo wears brings with it a boost in stats – such as inconspicuousness, elemental resistances, running speed and so on, but when fully assembled, each disguise permits Tilo access to certain NPCs and areas that would have been previously shut off to him before.

Where developer SeithCG has arguably done some of its best work however, is in its craft of the world itself. You wouldn’t think that a gloomy sounding keep would yield much in the way of opulent beauty and yet, here we are. From the softly lit hallways, flourishing courtyard fauna, dense surrounding forests and crumbling tower architecture, the reason why exploring the world of Ghost of a Tale is such an evergreen thrill is simply because it all feels like a resolutely organic creation, and never like it was all sputtered into existence by some unfeeling, world building algorithm.

With over 15 years of animation production and direction experience to his credit, and most recently serving as the animation director for the first Despicable Me and Lorax movies, Lionel ‘Seith’ Gallat is arguably the centerpiece of the development effort behind Ghost of a Tale and it shows.

Nowhere is the evidence of his talent more keenly observed than in the central protagonist himself – Tilo is simply a revelation; the way his eyelids recede exposing the shiny black orbs underneath, the manner in which his little nose twitches, the swish of his tail and even the little minstrel hat he wears with the bell on top, all of it combine to create a character that is bursting with not just charm, but natural, animalistic nuance too.

From a technical standpoint, Ghost of a Tale excels here too, albeit for some slightly surprising reasons. Powered by the Unity engine, developer SeithCG has managed to squeeze an absolutely beautiful game from that middleware, showcasing some cracking texture, lighting and shadow work that all combine to make Ghost of a Tale the single most impressive Unity-powered game to date.

Being arguably the most ambitious Unity powered title to date comes with some drawbacks unfortunately, and one of those is, somewhat predictably, the framerate. Though totally playable from start to finish, Ghost of a Tale does suffer from significant framerate dips whilst Tilo is trotting about the more geometrically complex areas of Dwindling Heights Keep. It’s never bad enough to affect play to any sort of significant degree, but it is certainly noticeable from time to time – even on PS4 Pro.

No discussion of Ghost of a Tale’s audiovisual achievements can be considered complete without mention of the soundtrack. A rousing musical score that deftly oscillates between eerie haunting melodies and much more raucously epic tones, the soundtrack that backs Ghost of a Tale is never anything less than a perfect partner for the on-screen action.

Developed by a hugely talented team of just five people, the end product in Ghost of a Tale is nothing less than an astounding feat. I am totally in love with Tilo, the world he and his numerous friends inhabit and his quest for his beloved Meera and I think, if you let him scurry his way into your life, you will be too.

Oozing heart, wit, charm and adventure from every digital pore, Ghost of a Tale is a beautifully crafted and warmly affecting adventure that deserves a place in the collections of PS4 owners everywhere.