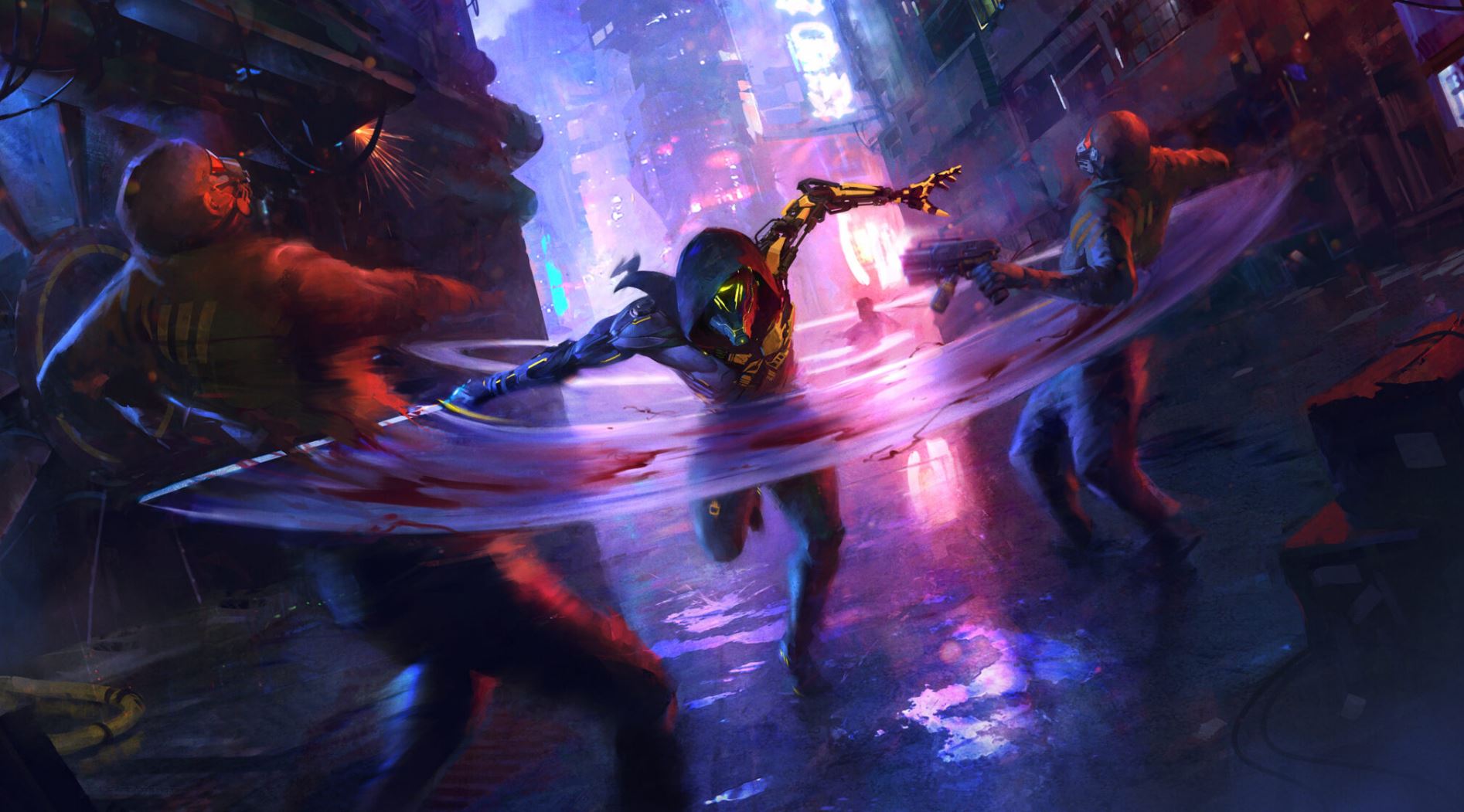 Ghostrunner PS4 Review – Ghostrunner, developed by One More Level draws inspiration from titles such as Mirror’s Edge and Titanfall. With Mirror’s Edge all but dead and buried, there is a gap in the market for parkour focused, action platformers with a focus on linear levels rather than an open world. Ghostrunner will have you running fast and dying even faster. If ever there were a game that can make you feel like a cyborg ninja, then this is it.

The setting for Ghostrunner is a suitably grim, dark, dystopian, cyberpunk near-future and that plays an important role in its level design. Although it can be often dull to look at, there are certainly some interesting environments. More importantly, they are very well designed for platforming. Your goal is to climb Dharma Tower, humanity’s last shelter as it is named. The setting itself is similar to something from Blade Runner or perhaps more aptly, a Mega-City from Judge Dredd. With a host of parkour abilities you slide, wall run, grapple hook, dash, and zip-line your way through these well-designed stages until you reach the top.

Ghostrunner takes the same approach as the original Mirror’s Edge, using linear stages as a means to progress rather than an open-world format. This lends itself well to speedrunning and time trials. But, the platforming in Ghostrunner can be highly challenging and sometimes you will find yourself caught in a loop of trial and error. This can be frustrating, but extremely satisfying when you eventually succeed. The challenge is also counterweighted by some very generous checkpoints and fast load times. Gradually you’re introduced to more mechanics to move through levels. Not to mention, you’ll find tokens, known as uplinks, in some levels that grant temporary upgrades. Upgrades such as throwing stars to knock out generators and open doorways, or a jump boost that will allow Jack (your character) to reach greater heights.

One Hit, One Kill

Comparable to Hotline Miami and Katana ZERO, combat must also be handled with equal parts precision and caution, as the enemies and the player character, Jack, can both be killed in just one hit. Armed with a sword, you will have to get up close and personal whilst the enemies will mostly try and attack from range. Naturally, moving at such a high speed, whilst under fire from enemies, leaves you quite exposed. Fortunately, the game offers a sensory boost technique, that allows you to slow down time, and dodge those incoming projectiles.

The combat sections leave room for creativity, as they become more of a parkour playground where you can experiment with various different combinations of moves to clear the room. As the game progresses, there are antagonists that require different approaches, such as enemies encapsulated in a shield bubble, that will call for the player to locate and destroy the shield generator before the enemy can be cut down.

Changing up the enemy design helps keep the challenge fresh and forces you to test out the new core energy abilities you have unlocked. For example, once you unlock the Tempest ability, you can emit a shockwave that will launch enemies backwards, meaning you won’t have to get up close to finish them off. The variety keeps the game fresh and interesting throughout.

The boss fights in this game tend to abruptly raise the difficulty level. One boss fight, in particular, throws an entirely new gameplay element at you, which is to parry consecutively. Prior to that, you will encounter one enemy that needs to be parried just once in order to kill them. This boss fight, however, asks you to rhythmically parry a series of attacks in quick succession, which feels sudden and will generally require a lot of trial and error to see it through.

There are areas within levels where you enter, what is known as ‘The Cybervoid’. A very schlocky sci-fi name, that generally fits the overall narrative and themes of the game. These Cybervoid sections serve as a means to offer up a sort of light puzzle-solving element. When selecting upgrades for Jack, you have to organise them much like a jigsaw puzzle, as they’re designed like Tetris blocks. This stops the player from selecting an abundance of over-powered upgrades and offering some balance as to not make the game overly easy.

The moment to moment gameplay is where it’s at. The combination of challenging platforming and intense combat scenarios makes for an incredibly satisfying, high octane, adrenaline rush. I cannot stress enough, just how satisfying it is to play. Wall running onto a zip line rail, dashing off of the rail and onto a flying droid, thrusting your sword into it, only to guide it into some poor fellow who is essentially an exclamation mark to finish off a series of stylish, poetry in motion, parkour moves, just doesn’t get old.

The soundtrack is about as traditional techno, sci-fi as you would expect, and it certainly helps with the rhythm of the game. I often found myself bobbing my head as I was slicing and wall running my way through the levels. The soundtrack does greatly assist in creating an almost rhythm game-like experience at times. The music certainly does its part in enhancing the overall gameplay experience. The sound effects when connecting your sword with an enemy are a little lacklustre, a more satisfying sound would have been the icing on the cake.

The voice acting is pretty solid too, except for a few iffy lines of dialogue towards the end of the game. The highlight is The Architect, an AI who plays a major role in the story and guiding you throughout the campaign. Unfortunately, the story is rather cheesy and predictable despite the solid voice acting. The narrative does just enough to satisfy curiosity. Although, once you experience the gameplay, you shouldn’t need much of a story to want to see the game through to the end anyway.

An Ode To The Past

There is replay value in the speedrunning and time trial aspect of Ghostrunner. The same replay value that built a solid speedrunning community for Mirror’s Edge. If that’s not your thing, then there are collectibles, audio logs and cosmetics (That change the design of your sword), to find. Ghostrunner and its 17 levels will roughly take you about 8 hours to complete, which is a nice change of pace from overly long titles. Ghostrunner greatly benefits from its short campaign length and old-school level design that does make it feel like a game from a previous generation, the sort of linear adventure we don’t get anymore. The sort of approach to game design that is sorely missed.

Ghostrunner certainly owes a debt to the first-person-perspective parkour focused action games that came before it. Recognising its strengths in speedrunning and time trials, One More Level has created a truer spiritual successor to the original Mirror’s Edge. Overall the gameplay feels more weightless like Titanfall, which lends itself well to the frenetic combat. Fans of either of these series’ will find a lot to love in Ghostrunner.

Ghostrunner is available now on PS4 and will release for PS5 in 2021.

It will take quick decision making, precision platforming, and skill to beat Ghostrunner. Whilst many of its environments are dull in imagery, they are an important component as to why it plays so well. Its lacklustre story does not take away from the addictive, thrilling gameplay that will keep you coming back. Ghostrunner is an exhilarating, challenging, adrenaline pumping platformer that succeeds in making you feel like a cyborg ninja.