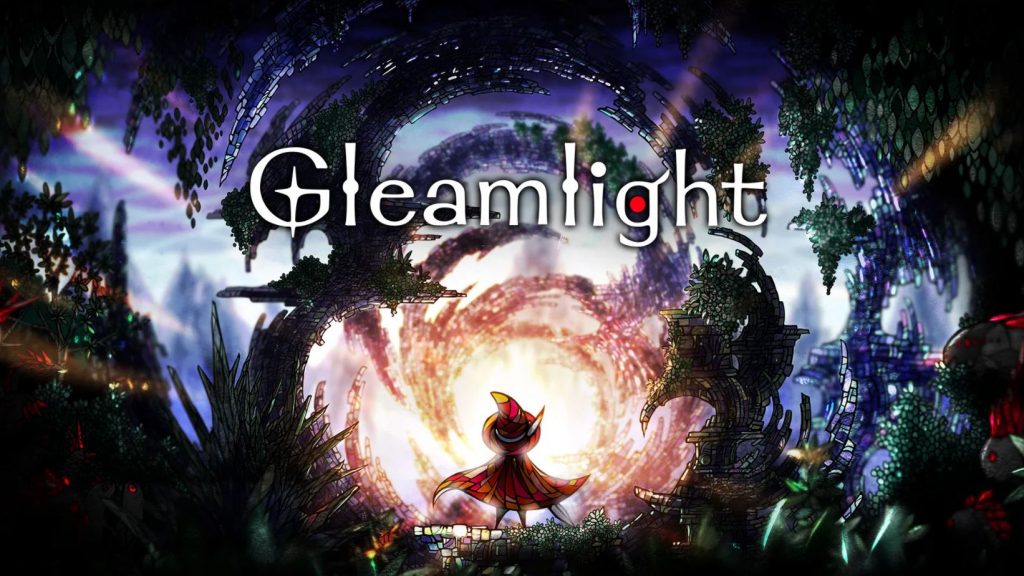 Gleamlight PS4 Review -Gleamlight is mysterious and compelling at first but those feelings disappear as quickly as they come. The facade of a deep and rich platformer evaporates when it becomes clear that the game is nothing more than a beautiful art style and the same short areas again and again. It leaves an incredible amount of potential on the cutting room floor and delivers something that ultimately feels like an incomplete and rushed experience.

It Sure Does Look Nice

When I started the game I was immediately struck by the stain-glass art style. It looks incredible and I was very into the mysterious and ominous vibe it was giving me. The soft piano score to match added an extra level of mystery to it all. The lack of any UI lets you figure out every aspect of Gleamlights Metroidvania platforming. At first, I was extremely intrigued by this since intrusive UI’s in other games I’ve played can often be annoying and sometimes even ruin the experience of playing.

Without a UI, it initially made everything feel more like a game, with me figuring out the controls myself and discovering how you interact with the world and enemies. It even made each boss encounter that much more exciting because at the end of each one you acquire a new skill, so that discoverability was able to last throughout the length of the game. The platforming in the game is extremely precise, and each new ability opened up more possibilities for how to approach the different puzzles.

My favourite gameplay mechanic though was the healing, which worked as sort of a back and forth between you and the enemy you were fighting. When you take damage, that enemy gains health from you and vice-versa. What I loved about this was that it kept me constantly engaged in the combat and put a heavy emphasis on offensive gameplay. The game also doesn’t have a block mechanic, so well-timed dodges and attacks felt great to pull off.

Unfortunately, my enjoyment of the game ends there, and so did the game itself. It is extremely short, and players who don’t go past the first set of credits could breeze through the game in a little more than an hour. Starting the game back up will put you through the same set of areas backwards, facing a few new bosses along the way but no new enemies. The only difference is that certain enemies are now stronger than they were, which was indicated by a glowing red aura around them.

It was also at this point where I began to realize that although the environment looks nice, not being able to see half of it is more annoying than anything else. Your character emits only a small amount of light so you can only see what is immediately around you. On more than a few occasions I found myself needing to fall towards a surface I couldn’t see, only for it to be covered with environmental hazards I had no way of seeing. In some cases, these were avoidable with quick reflexes, but that was the minority of cases. It felt like I was being punished for poor level design, and also made me feel like I couldn’t see the full scope of beautiful the game is.

The combat is mostly very slow, and while some of that comes from slow-moving enemies, it is actually how slow you are that made it annoying. The first negative feeling I had in the game was when I first tried swinging my sword and noticed just how slow it is. The animation feels like it takes an incredibly long time to complete, which was okay when fighting the early, slow-moving enemies but was a huge hindrance later in the game.

The boss fights were short reprieves from the mostly boring enemy combat but none of them really offered enough of a challenge for me to find out. I was able to defeat some of them so quickly on my first time through I wondered if maybe I had just found a mini-boss. This is also where the game’s short length did it few favours, because even though it’s meant to be played over and over, fighting multiple re-skins of enemies even just on one play through is annoying the first time never mind the third or fourth.

When reading about the game, it is clear the developers removed the UI entirely in an attempt to better immerse the player in the world of Gleamlight. When playing it definitely has that effect, with some pretty negative side-effects to go along with it. No UI in Gleamlight meant that everything about the gameplay was super simple. Now simple isn’t exactly a bad thing, some of the best games use simple gameplay mechanics as a level of accessibility and then teach the player how to use the same mechanics in more complex ways. In this case, however, simple was bad, because the gameplay lacked any kind of depth whatsoever.

There’s also no real story to go along with the game to keep you interested. I watched the credits roll a total of six times, and I still don’t know what’s really going on. The only narrative exposition comes from your Sword’s Memories, which are nothing more than one line explanations for your achievements in the game. They only really offer hints at the state of the world and none of them were intriguing enough for me to really want to find out more. The subtle storytelling through the backgrounds looked like it could be interesting, but with nothing to connect it to it just felt aesthetically pleasing rather than offering a look into the lore of the world.

Now, I mentioned before that my favourite gameplay mechanic is the healing, which is true, but it also felt like padding as I continued playing. The back-and-forth aspect sometimes made enemy encounters last a little longer than they should have, and these small-time increments add up when you’re playing the game through again and again. I still appreciated how it kept me playing offensively since I prefer that over a defensive strategy, but by the end it made the combat feel like a chore.

Use Your Own Words

When I was in school, my friends and I would show each other our homework to help one another finish an assignment or study better. Whenever we used each other’s answers, we always re-wrote what was said in our own style as to not just copy and paste it. Gleamlight seems to have forgotten to put its homework in their own words because everything about the game is basically Hollow Knight. What I mean when I say they forgot to use their own words is that they didn’t really try to improve any aspect of the game they were clearly trying to emulate or put their own creative spin on it.

Just having a different art style isn’t different enough, and it makes matters worse when everything about the gameplay is a worse version of what was offered in Hollow Knight. The combat is slower and less exciting, the boss variety is non-existent, and each fight boils down to the same result of ‘destroy the shield first then go ham till the fight is over.’ Though the platforming is precise, the level design doesn’t allow for you to go above and beyond the way Hollow Knight does in some of its more infamous areas like the Path of Pain.

This isn’t the first time these comparisons were made, as the developers already addressed accusations of the game being a Hollow Knight copy back when it was first announced in 2019. This game clearly tries to emulate Hollow Knight at every turn but fails to each time. As someone who adores Hollow Knight and has spent countless hours in the game, playing Gleamlight is akin to swimming in the kiddie pool next to Hollow Knight’s full length Olympic sized pool with a 10ft deep end.

A Demo Released As A Full Game

Gleamlight is an interesting indie title with some good ideas but ultimately falls short of its ambitions. The slow and standard combat, along with some intriguing albeit annoying mechanics sour the beautiful aesthetic of the stain-glass world. Overall it makes for an overly simplified game that doesn’t do much to inspire and feels like an early access demo than a full game.

Gleamlight tries to emulate a game like Hollow Knight but does nothing to make it their own past a different art style. Keeping the comparison out of my head would have been so much easier if everything wasn’t so similar and I imagine in a world without Hollow Knight I probably would have liked it a lot more. The game is at least short enough that if you want to stop after beating it once you can, but I can’t in good conscious recommend it when you can play Hollow Knight instead for cheaper.

Gleamlight is available now on PS4.

Gleamlight's art style is beautiful and immersive, but the combat here is slow and tedious. With no story to latch onto it all just feels shallow. Even though the game is extremely short, your time and money are better spent elsewhere on other games in this genre.