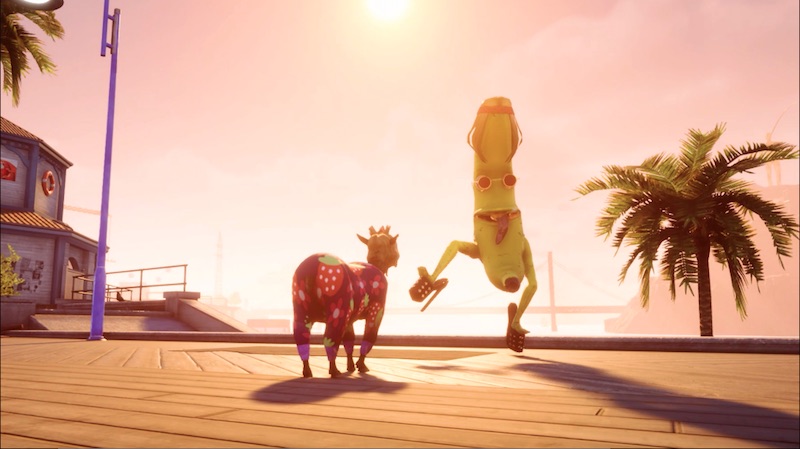 I guess Coffee Stain saw the muted public response to sequels of iconic indie darlings and made the smart move to just skip to the third entry. Does that mean it won’t suffer the same strange fate as games like Spelunky 2 or Amnesia Rebirth? Who knows, but in the meantime, there’s a game to be played!

Baaaaack On The Streets Again

Goat Simulator 3 is still very much a sandbox game where your aim is to cause as much mayhem as possible in a world that serenely tolerates your goaty existence. But is it doing anything fresh?

One thing is abundantly clear from the off, while Coffee Stain has made a considerably more polished sequel on the technical front, the underlying game is not deviating from the formula all that much. The game opens with our sacred goat arriving in the back of a cart to the town of San Angora, and a parody of Skyrim’s opening is the first joke out of the gate. That’s dated, you say? Well, yeah, but a) that’s kind of the point and b) don’t pretend like we haven’t seen that opening used in plenty of memes even this year.

Part of Goat Simulator’s ‘charm’ comes from its inherent naffness, and Coffee Stain knows it, so why wouldn’t it go with the same tone this time around? As refined as Goat Simulator 3 might feel compared to its predecessor, it’s got the spirit down pat right down to the janky nonsense that plays a big part in the magic. Basically, Goat Simulator 3 hasn’t really changed, and that has benefits and issues.

The improvements first though! The game is a massive step up on a technical level, although granted, that’s not saying a lot considering how roughshod the original game was. Your goat now traverses the environment with more stability and sense than ever, and the game world is bigger, more detailed, and better connected.

There’s also a lot of lessons learned from the DLC run Goat Simulator with a deeper, more detailed structure to the ‘campaign’. It’s still at about Tony Hawk’s Pro Skater levels of mission structure, but I’m not sure you need much more in a game about Neo of the farmyard. There’s also a better understanding of where to go and what to do without holding your hoof too much. 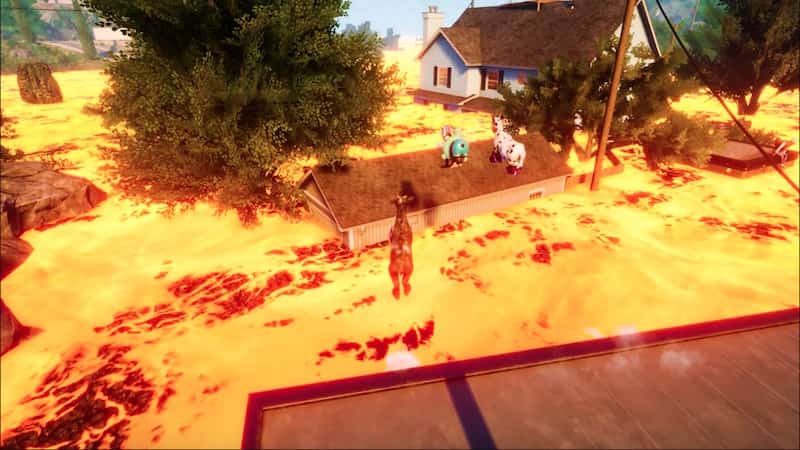 I also found the overall experience is just a lot more fun on purpose now. Coffee Stain obviously knows what hilarity was a goldmine in the original and has subsequently weaponized that effectively for the sequel. All the moment-to-moment nonsense is knitted together nicely to make Goat Simulator 3 feel almost as fresh and fun to play as it once was, and for significantly longer than the original to boot. Driving vehicles is another treat that adds to the delicious chaos.

As naff as the humor can be, it’s a game that still made me chuckle plenty with its stupidity. Taking part in yoga classes, bowling a pig at pedestrians, grinding on rails as a goat in a buff boy bodysuit, there’s lots of daftness that prove to be crowd-pleasing.

To be fair, my crowd is my seven-year-old daughter who loves Goat Simulator, so maybe I’m going soft on Goat Simulator 3’s funnies because I witnessed my daughter laughing uncontrollably at punting people into bodies of water over and over again. Then again, isn’t that just the kind of audience Goat Simulator 3 is for anyway?

There’s a level of absurdity that ties together the various puns, pop culture references, and slapstick nonsense. So even though its approach to comedy is scattershot, it pretty much guarantees a hit now and again. It also means exploration rewards you with all manner of silly secrets and rib-poking of gaming culture. Think of a big gaming thing in the years since the original game and there’s a good chance Goat Simulator 3 has a riff on it.

Co-Op Rounds Out This Mad-As-A-Hatter Sequel

Boosting the fun factor is the co-operative component. Goat Simulator 3 features both online and offline co-op, with a split-screen mode that came in rather handy when my daughter wanted to get her hands on the game whilst I reviewed it. 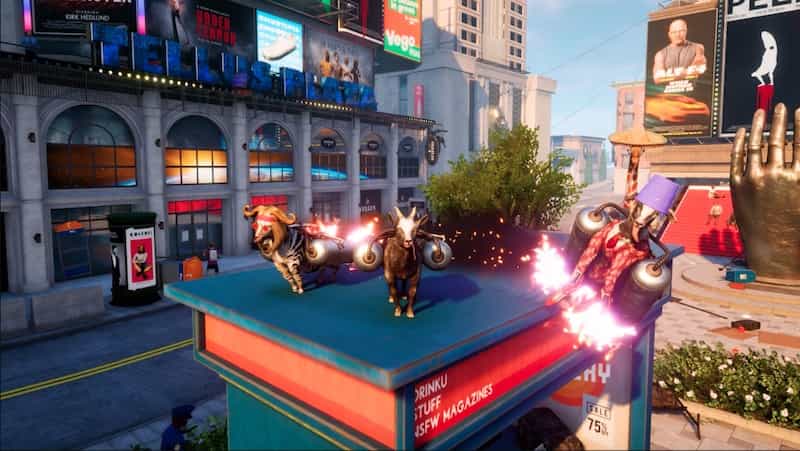 There’s a suite of mini-games scattered around San Angora specifically designed for this that range from simple races to cheeky homages to other multiplayer titles such as Fall Guys and Splatoon. And if the competitive angle isn’t for you, there’s always the good old-fashioned option to cause absolute carnage together. Naturally, that is as fun as Goat Simulator gets, because everything is funnier when someone else is involved in the silliness.

Goat Simulator 3 is exactly what it should be. A rehash of the original, but bigger and better. I know it’s easy to dismiss the original game as a gimmicky viral hit, but there was something quite genuine about its absurd, glitchy chaos, and the same rings true of its sequel. It’s knowingly shallow and stupid, and is all the better for it.

Goat Simulator 3 isn’t exactly ripping up the thin rule book its predecessor scribbled out, but it recaptures the stupid anarchic joy and amplifies its influence across a bigger, better game world.