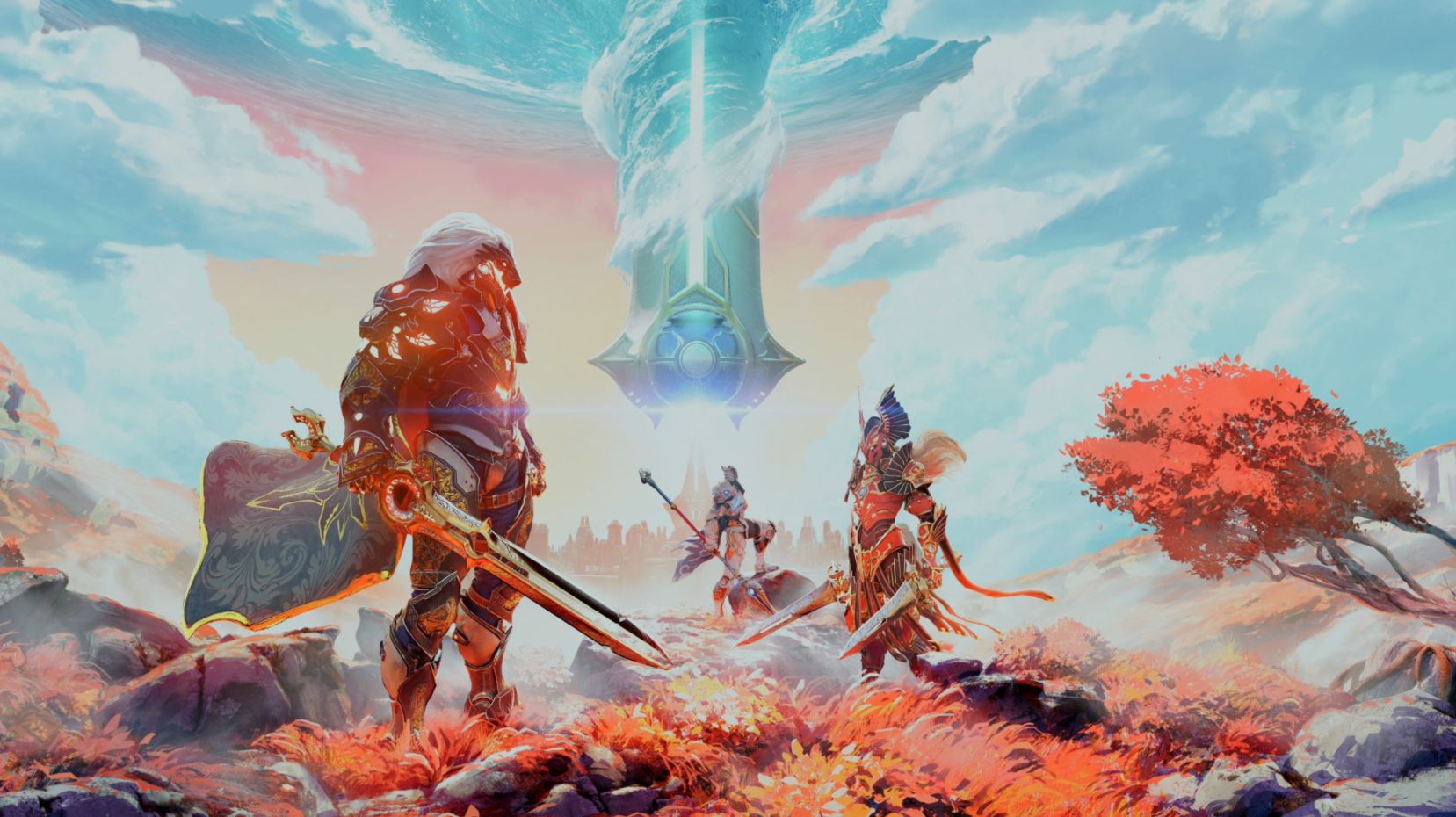 Godfall PS5 Review – When I was 17 years old, I went on a student exchange to the then-Soviet Union. At that time, visitors from the United States were a relative rarity, so my gaggle of 15 American kids found ourselves shuffled from one cultural site to another as our hosts attempted to show us the best of the best in a very short period of time. As a result, I toured many Russian royal palaces, back-to-back, and found myself wandering from one spectacular gilded ballroom after another. These are truly marvellous structures, ornate and beautiful, with gold leaf dripping from every surface.

Before long, my little group became inured to the experience. With our rudimentary language skills, a lot of the history being imparted went over our heads. Left with only visual input, we were numbed by seeing too much splendor too quickly, and we eventually ceased to be impressed with what we eventually started referring to as “gold rooms”. Going to tour palaces eventually became a slog, and eventually we begged to skip tours in favor of other, more immediate cultural experiences. Palaces are great, but eventually kids want to go to the circus. You can see a metaphor coming here, right?

You may be wondering why I’m bringing up my exchange student experiences at the beginning of a video game review. It is because Godfall, the new “looter slasher” from Counterplay Games, is a very gold game, with visual majesty splashed on every surface imaginable. This is a gorgeous game. But like those Russian palaces I reviewed long ago, playing Godfall eventually feels empty, a relic of a past time that eventually dulls players’ senses with too much glitter and not enough depth.

Godfall immediately reminded me of the “gold rooms” I spent so much time in during my youth, with its ridiculous level of visual beauty and sparkling presentation. This is a game that makes a spectacular first impression, dazzling players with next-gen visuals that are without par. The opening segments of Godfall delighted me, offering a quick cutscene before throwing me into the action. Almost immediately, I was stomping through the corridors of an ancient golden temple, swinging my hammer around madly and absolutely wrecking dudes. I thought that I was in for a really good time.

But after maybe five hours of play, it became quickly apparent that I had seen everything that Godfall had to offer. Sure, the sights would change as I moved through Godfall’s beautiful but templated worlds, but the main mechanics and gameplay loops would remain so similar that I soon burnt out. Only the fact that I was reviewing Godfall kept me pressing forward.

As Godfall begins, the player character is tossed unceremoniously off a cliff by his evil brother, Macros. Macros is on a mission to become a god, and his left-for-dead-but-not-really-dead brother sets upon a mission to stop this from happening. This quest involves visiting a few different realms, running hunts and other missions, stacking up enough materials to confront and defeat each realm’s boss, and then finally moving forward to defeat Macros.

The plot never really gets much deeper than that, which in some games might be fine. They can’t all be Shakespeare. But Godfall fills its time with so many chattering conversations and grinds through so many mechanical story scenes that I soon tuned out whenever anyone began speaking. It all feels like window dressing, and one of the worst sins Godfall commits is that it prevents players from skipping its interminable conversations. For a lightly outlined story, these people sure do talk a lot.

Players are granted a small hub early in the game. From here, they embark on quests by selecting them from a simple map. The loop is simple – go on a quest in one of the three semi-open worlds. Wander around killing dudes with the admittedly awesome combat. Click on a McGuffin, defeat a boss, or survive waves of baddies on a timer. Get some loot. Return to hub for a pointless conversation. Repeat.

The hub is also where players can invest the materials they earn while on missions to create new Valorplates, which are essentially new suits of armor that offer certain powers and special moves. Unfortunately, beyond their beautiful designs, I was utterly unable to decern a difference in play styles when equipping a new one. The elemental powers never materialized in a way that I could recognize, and the special moves all boiled down to “do a lot of damage for fifteen seconds.”

These systems in Godfall should be fun, but it all feels a little off, leaving Godfall feeling hollow and empty. It is difficult to define why this beautifully made game becomes such a slog. Maybe it’s the lack of mission types. Maybe it just repeats itself too much. Maybe it’s the lack of ranged weapons. Whatever it is, Godfall quickly falls into a “been there, done that” rut, and only occasionally pulls itself out with its challenging and entertaining boss fights.

Interestingly, Godfall’s combat is remarkably well made and tactile. Loot drops steadily throughout the game, and among the other stat-increasing items offered are five or six different weapon types. Each type plays differently, from the lightning-fast dual blades – which allow players to Drizzt Do’urdon (he’s a verb now) wildly into battle with swords cutting through bad guys like butter, to the giant battle hammers – which come crashing down at a slower rate but do devastating area of effect damage at any villains unfortunate enough to be standing nearby.

Players also have access to a shield, which remains equipped regardless of the weapon type being used. The shield allows for blocks and parries and sinking a few skill points into it allow players to hurl it into a group of enemies like Captain America, softening the field with damage before wading in with your main weapons. A dodge move can also be enhanced, allowing players to slide out of harm’s way if timed correctly.

Most common enemies go down rather easily, and Godfall offers a number of ways to grind a level or two if you are having difficulty mowing through run-of-the-mill opponents. These battles are fun and mindless, offering spectacular takedowns with a click of the R3 button. But where Godfall really reveals what could have been is in its clever and entertaining boss battles, which force the player to sit up and pay attention or risk humiliation.

Boss battles are where Godfall dips its toe into Souls-like territory, with players needing to memorize patterns and stay alert to succeed. These bosses will quickly wipe the floor with any player that wanders in without consideration, and I often had to restart battles five or six times to defeat them. But when the player is struggling to come to terms with a battle, Godfall does something strange that I found somewhat off-putting.

The game starts making concessions for the player to help them get past the battle. First, added enemies stop appearing on the battlefield. Then, if players continue dying, they will find the battle restarting with the damage that they did on the previous run still missing from the boss’s health bar – which feels a little bit like cheating. Godfall keeps making things easier and easier until players are eventually shuffled through the fight and can progress.

I appreciate Godfall having difficulty settings. I am not above setting a game to easy to get past a difficult battle. But to have the game dynamically scale back the difficulty of a battle I am having trouble with takes some of the triumph of winning that battle away from me. By letting me win, Godfall left me feeling a little cheated. In the end, players can just keep whacking away at fights, eventually overcoming them through brute force and repetition, which is incredibly unsatisfying.

Multiplayer And The Endgame

Multiplayer comes with difficulty, as you must know another player with Godfall in order to start a party with them. There is no random matchmaking, which seems like a major oversight. After several failed attempts to get colleagues to play with me, I finally shared my account and forced my son to run around with me for a while. I must admit, we had a good time trucking through levels and blasting bad guys. But most of the fun came from us making jokes and enjoying each other’s company while mindlessly mashing buttons. There wasn’t much motivation for us to continue after a while.

For a game that makes obvious homage to looters like Destiny, the endgame feels remarkably light out of the box. After finishing the story, players are treated to a tower climb, and you can imagine what goes on there. Beat dudes, get loot, get key, go to the next floor. Repeat. Perhaps more modes will be released somewhere down the line, but I doubt I’ll be coming back to check them out.

With the story being such an interminable mess, the systems feeling less than compelling, the boss fights being hobbled, and the environments all feeling like more of the same, Godfall is left feeling like a project that somehow went off the rails. In a library of games that I have on the PS5, Godfall is simply the last one that I would pick to play.

So, there it is. Doing stuff in Godfall can be fun in the moment, in a mindless way, but eventually, players will ask themselves what motivation they have to continue. It is hard to put my finger on why the gameplay loop in Godfall falls so flat. Everything is here for a seemingly fun, mindless loot grind, but Godfall ends up feeling like a stroll through a beautiful, lifeless museum.

Godfall has all the ingredients for an enjoyable epic game, but somehow these ingredients are assembled into a soulless Franken-game that feels empty and soulless. While the combat is solid, and some of the boss fights are clever, players will still be left wondering why they should continue playing. Gorgeous to look at, but ultimately numbing to play.