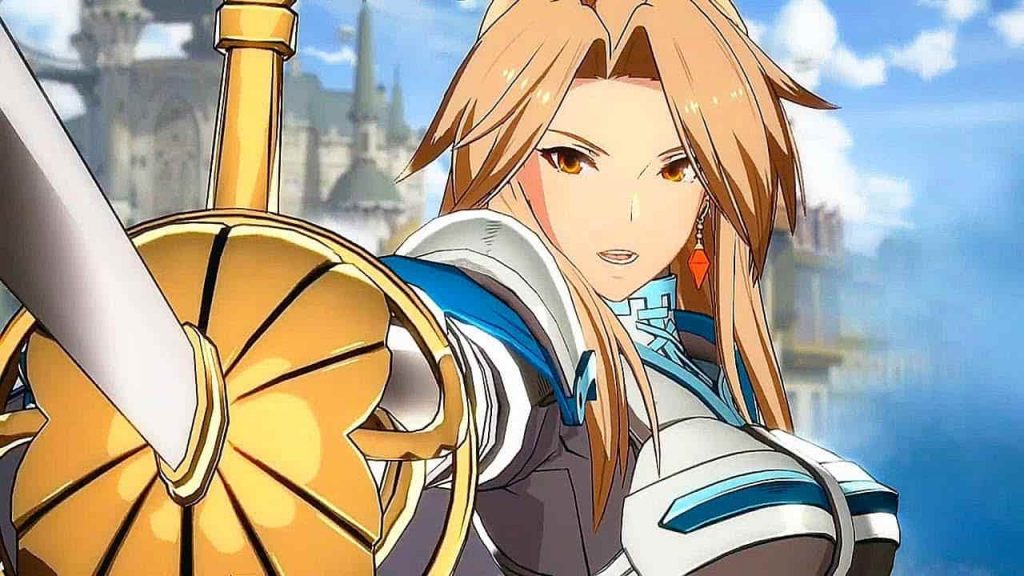 Granblue Fantasy’s Characters and World Are Brimming With Personality

Granblue Fantasy takes place in a sky-bound world where people live on floating islands and use airships for transportation. It’s a wonderful world with a lot of lore and some great characters. Unfortunately, as I mentioned before, the franchise just doesn’t have much exposure outside Japan to really dive into it all.

Thankfully, the story in Versus is an original story and doesn’t follow the canon lore established in the original mobile and browser games. This is good because you don’t really have to know what’s going on in the overall story to follow it. It’s just unfortunate that when you’re introduced to some incredible characters, you don’t really know anything about them or who they are in this world.

The game features a full index that goes into the characters and the world’s backstory which helps a lot because there’s a lot to read, but it’s not really the best or most convenient way to learn about the franchise. In a videogame, it’s something you want to experience rather than just read about.

As with most fighting games, you get your standard modes like versus, training, combo training, and online modes. Along with a story mode, the difference between other fighting games and Granblue Fantasy: Versus story mode is that here it plays more like a looter RPG.

They call it an RPG mode, but it’s more like a side-scrolling beat’em up. You take on dozens of foes from stage to stage earning lots of weapon loot to make your characters stronger. The RPG mode is the game’s story mode so you’ll get plenty of high-quality cutscenes and plenty of dialog to move the story forward.

You won’t play with just one character in RPG mode. As you progress the rest of the game’s roster will become available to use. You can also take a partner with you to each mission, which is great because it also adds a multiplayer co-op mode. Your partner can be used by an online friend or in couch co-op.

Each mission in RPG mode nets you experience points that levels up the character and the partner you’re using, and completing challenges in each mission will net you some neat rewards and loot. Loot drops are weapons that increase the damage you do and how much health increase you get.

You can level up these weapons using the currency you acquire and upgrade their unique skills. Each weapon has an element attached to it like Wind and Fire. In each stage in the story mode, you’ll be told what element will benefit you against the foes you’ll face off against. Which will give you a nice advantage. The skills each weapon has varies like increasing damage with specific attacks or allowing you to increase your SBA gauge faster.

Changing your elemental weapons plays a big role to give you an advantage, but in all honesty, the RPG mode isn’t really all that hard as long as you constantly upgrade and equip the right weapons.

The RPG mode is a good length. I was able to finish it in about five hours but it’s also very repetitive. Most of the stages simply have you taking on dozens of enemies like soldiers and goblins. The other battles are the boss battles, which play mostly like the one on one fights you would expect in a fighting game. Except in RPG mode, it’s actually two on one.

The boss battles also play a little differently. Bosses have a massive health bar, and after taking a certain amount of damage the bosses go into an overdrive mode which makes them stronger and more damage resistant. Some of these bosses are massive in size, taking up half the screen, and their fights play like a 2D adventure game with attack patterns you have to learn and attacks you’ll have to jump over and avoid.

Halfway through the RPG mode, you’ll unlock The Tower of Babyl. This mode has you climbing a massive tower, clearing waves of enemies as you go from floor to floor with some great rewards to upgrade your character’s weapons. Be careful though, as the enemy difficulty increases quite quickly in this mode.

Once you finish the RPG mode’s story, you’ll be able to go back through the story on a harder difficulty, which of course will ned you better rewards and higher level weapons.

Accessibility And Ease Makes Granblue Fantasy: Versus A Fighting Game For All

Arc System Works has once again delivered in the actual fighting department. Each time Arc System Works releases a new fighting game, they go out of their way to make their games more accessible.

Granblue Fantasy: Versus is probably the easiest fighting game to get into. What makes it so accessible is the ability to pull off all of your special attacks with the simple tap of one button. All the character’s special attacks are easily pulled off by pressing the R1 button and any given direction on the D-Pad

You can make these special attacks stronger by pressing Triangle or Circle at the same time but with consequences. If you choose to use these stronger versions of the attacks, you will activate a cooldown timer for these abilities. Each character’s special attacks are displayed with icons just under each character’s health bar, giving you a clear view of how long the cooldown will take.

This keeps you from spamming the same moves over and over, forcing you to change up your move set. You can, of course, perform combos, but the game doesn’t feature a vast combo system or even a juggling system like other fighting games.

It wouldn’t be an Arc System Works game without some amazing super moves. When you’re SBA gauge is full from landing attacks and taking damage, you’ll be able to do an amazing super attack. When you’re health drops below 30% and the SBA gauge is full, you’ll be able to do your Ultimate attack that features an amazing cutscene and does massive damage.

If you’re discouraged from fighting games because of the complex button combinations you have to string together, this is the fighting game for you.

Granblue Fantasy: Versus is a fantastic looking game. Using the art style from the franchise’s anime adaptation, the character models and environments look amazing. Versus is easily one of Arc System Works’ best-looking games to date. This can also be said for the music which mixes some nice classical music with hard rock metal.

Unfortunately, there aren’t that many characters to choose from. There are more planned as downloadable content, but I do wish there were a few more characters. There are twelve in total, and each one is vastly different from the others. So in a way, the uniqueness of each character offsets the quantity. In short, you’re getting quality over quantity in this roster.

The online modes also are not as robust as their previous titles. With just one on one ranked and unranked matches. This could be due to the game’s design to appeal to as many people as possible, not just the hardcore fighting fans.

Fighting game fans may find it too simple but Granblue Fantasy; Versus is the easiest and most accessible fighting game I've ever played. Though a small roster and simple competitive game modes will be expanded on later, the big focus here is the game single-player RPG mode which the game pulls off wonderfully.