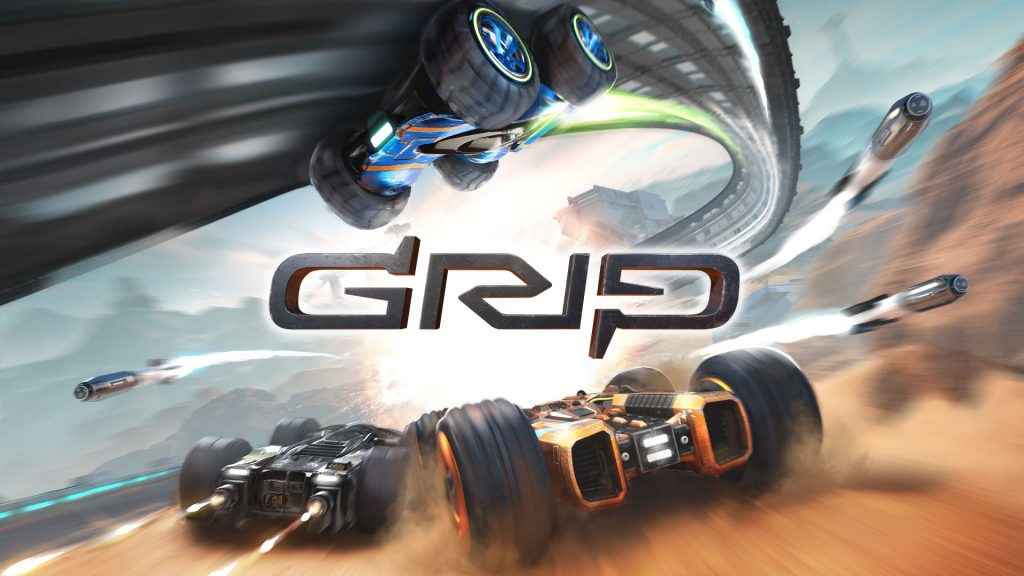 Grip: Combat Racing is a monster of a game. In an era when games release in a half-complete state, with modes added after the fact and vague promises are made about DLC expansions, when developers regularly ask players to purchase Season Passes sight-unseen, Grip is a refreshingly complete package.

Grip focuses on Rollcage-style racing, with vehicles that move at such a blinding velocity that they stick to any surface. This allows racers to slide sideways up walls, pass competitors by whizzing past them on the ceiling, flipping in mid-air and continuing to race upside down. The game’s camera reacts accordingly, changing orientation on the fly to maintain the player’s perspective. As a result, Grip: Combat Racing is one of the most dizzying, adrenaline fueled games I have played.

Vehicles (I hesitate to call them cars) swirl through tubes, bouncing off ramps and firing projectiles at each other in a cacophony of beautifully orchestrated chaos. In tunnels with low ceilings, players can launch themselves straight up into the air. The camera shifts, the ceiling becomes the ground, and the race roars on.

The name Grip is deftly appropriate for this game – not only for the way that vehicles’ tires grip the racing surface, but also because as I play it I’m gripping my DualShock 4 so tightly that it’s a wonder I haven’t snapped the thing in half. I’ve seen plenty of games attempt to capture mercurial gameplay of this nature just to fizzle out. In delivering thrills, Grip is wildly successful.

Grip is a giant game, with an enormous amount of content for the price being asked. It almost feels like a project that was forcibly wrenched away from developers who were locked in a frantic state of endless productivity, desperately laboring through the nights to add just one more mode.

In fact, scrolling through the features included in Grip, I was at a loss to come up with something that might be missing. The only thing I could come up with was PS VR support, and frankly, Grip in VR would make me want to die. Hell, just playing Grip on a television screen can be dizzying at times.

Unpacking the amount of content included in Grip: Combat Racing and wrapping your head around it can be challenging. There is an overwhelming number of modes, race styles and configurations. New players will probably stare at the screen for a while, wondering where they should start. I would recommend starting with the sprawling single player campaign to learn the ropes.

Get your bearings first in single player

The single player wisely introduces the player to modes slowly. The first tournament that players encounter ignores the combat aspect altogether, focusing instead on acclimating newcomers Grip’s ridiculous speed and wall-climbing race mechanics. Players are able to restart races as often and as many times as they like, so rage-restarting is absolutely an option. This allows newcomers to race the beginner tracks as often as needed to learn the ropes. As tournaments are overcome, new mechanics are introduced. New tracks are gradually integrated into the flow. Additional race modes are added to the mix. Weapons and powerups are added to the fray, randomly rewarding players with missiles, shields, speed boosts, and the rest of the usual race-oriented power-ups. My favorite is the machine gun pickup, which chews up your opponents from behind, sending them spiraling off course.

All of this combines to produce a constantly changing and entertaining long-term tutorial. Newbies are gradually brought up to speed until they feel comfortable with the incredible velocities, the tracks, and the combat mechanics. Around the fourth or fifth tier, you will have seen enough and will be ready to hop into multiplayer.

All the modes you could want or need

Players start with five or six vehicles available to them, but as they gain XP from races and they advance in level, new vehicles quickly open up. There are a number of customizations that unlock for vehicles as well, but all are purely cosmetic. The vehicles are very nicely balanced, and the developers wisely declined to allow players to upset that balance.

There is a nice variety of race modes, keeping Grip from falling into the first-to-the-finish-line-blow-up-your-buddies slump. While there are certainly modes in that vein, there are also some alternatives to shake things up. One mode has racers flying through the tracks for a set number of laps, doing as much damage to competitors as possible. Reaching the finish line first doesn’t matter a bit in this mode, its all about how much hurt you inflict on your fellow racers. There is also an elimination mode, and a mode that challenges players to just flat out race – no weapons allowed. I was also delighted to discover a mode that allows for battle arena combat too. This takes the action off of the track and transplants it into large open arena spaces, readily stocked with a liberal supply of pick-up for some Twisted-Metal-style carnage. Even here, there are modes within modes, with deathmatch, capture the flag, and hot potato games to play around with.

Tracks and arenas are extremely well designed and beautiful, all hinting at some unspecified science fiction future where the laws of gravity have become somewhat less relevant then they are in the here and now. While I marveled at the artistry on display in these mind-warping environments, I quickly settled on some favorites, as well as identifying some tracks that I simply hated. With such a variety of racing modes, I found that certain tracks were simply more suited for specific modes than others. And while I generally found the track design to be stellar, there are certain choke points on some tracks that led to some of the most frustrating gaming moments I’ve had in recent racing games.

Some frustrations creep in on certain tracks

In Grip: Combat Racing, there is a lot to keep in mind. You are flying through an amazingly convoluted track at lightening speed. You are picking up weapons and power-ups, and waiting for the perfect moment to discharge them. You are keeping an eye on your competitors, keeping track of what is up and what it down, and trying to keep from collide with the many obstacles scattered about that can stop your race cold. In Grip, with the speed and the chaos, it is more difficult to achieve racing nirvana. My mind has a hard time detaching from the proceedings, and I remain immediately involved in every curve, every hill, every tunnel. Grip is so frantic that it takes every ounce of my energy just to hold the race together and keep it from falling apart at the edges. My back is tight, I don’t blink as much as I should, my fingers almost go numb from gripping the poor controller.

So when I am in the lead, and some moron shoots me with a missile from the back of the pack, it can be a little frustrating. But that’s the nature of the game, right? It isn’t called Grip: Relaxing Relaxation Time. It’s Grip: Combat Racing. Players should expect some frustrating shots to send them spinning, knocking them out of position and putting them at a disadvantage. But (and here is my only real complaint about Grip), certain tracks are designed in a way that various sections of the track run parallel above and below each other. So, if you are coming out of a curve and an enemy hits you at just the right moment at just the right angle, the camera goes bonkers and you can actually get sent flying from the track and land down below on an earlier section of the track, essentially losing about 30 seconds of precious race time.

If this happens to you on the fourth lap of a four lap race, it is maddening. But if it happens to you over and over again on subsequent races, it is throw-the-controller-at-the-wall infuriating. The randomness of enemy’s attacks can sometimes seem less than random, and the layouts of a few of the tracks seem to encourage this sort of shenanigans. Of course, if I ever manage to pull of the same shady trick on an opponent in multiplayer, I will be delighted beyond belief. A little guilty feeling, but delighted.

Multiplayer is a priority

Speaking of multiplayer, there are a number of options to choose from. There is a nice split screen option, which allows up to four local players to howl at each other from the sofa. While this obviously condenses down the visuals to a quarter of their original glory, I found that Grip still ran reasonably well. The framerate seemed steady on my standard PS4, and we had a generally good time playing.

This is also an up-to-10 player multiplayer option. Not too many folks are playing online prior to release, so I didn’t have much opportunity to try this out. I did, however, play with the extremely versatile tournament building tools, and found them to be extremely robust. You can basically mix and match all of the modes and tracks from across the game in order to set up hours’ worth of playtime for you and your friends. When searching for a match online, there are a ton of parameters that can be set and tweaked in order to find just the right match.

There are a ton of other details in Grip that show the great care and effort that was taken it its creation. The carkour mode, that has carefully constructed tracks that challenge players to trick their way through to the end (I am godawful at this mode). The wild tank-rocket-ship-militaristic vehicle design. Everything – from the personalities and racing styles given to every AI opponent to the ambigram logo that spins while the game loads – reveals how much of a passion project this game was for its development team. Unlike a lot of games on the market that feel like sterile faceless products, Grip has personality. There just aren’t many games like Grip that are polished to a crystalline AAA sheen, but retain their indie identity and funkiness. Despite its occasional frustrations, Grip is a title that racing fans should take notice of. Just remember to stretch your back before and after every session, try not to grind your teeth and have an extra controller on hand for when you snap the first one in half.

Grip: Combat Racing offers an enormous amount of fun content for a reasonable price. Frankly, this game could go toe to toe with a lot of AAA racers and come out on top. Blistering speed, amazing track design, wild action; if you can get past some mild frustrations, Grip fully delivers an intense, jaw-clenching good time.