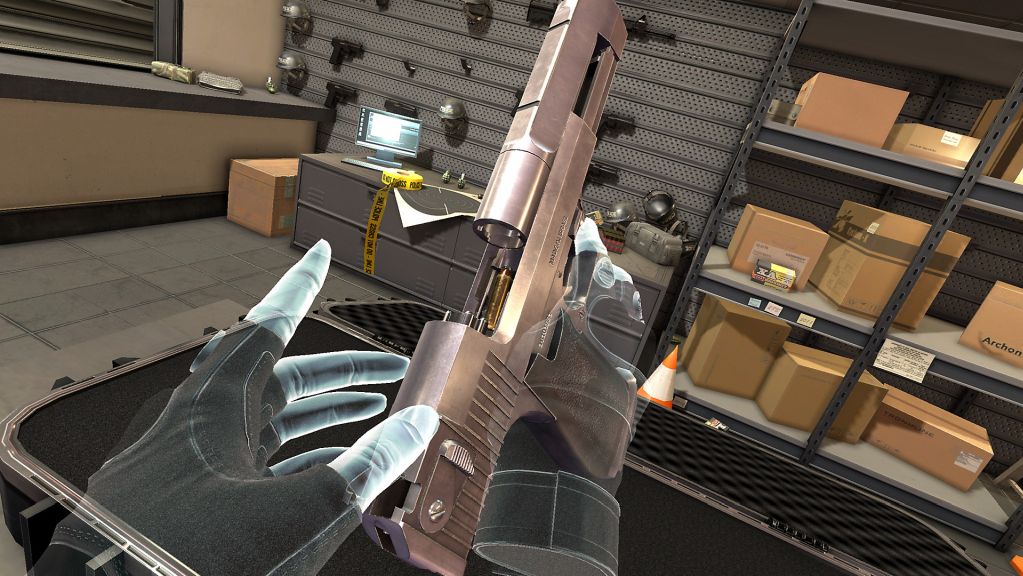 There is something to be said for a game that picks a singular focus, and then drills down further and further into that thing until it finds its molten core. No distractions, no gimmicks, just a laser focus on one singular mechanic.

Gun Club VR Manages To Stand Out In The Crowd

Game Club VR is such a game, and the singular mechanic that developer The Binary Mill chose to focus on was the reproduction of real world weaponry and ballistics in VR. I’m happy to say that by focusing on and exploring this mechanic from a number of gameplay angles, this team did indeed discover a unique formula that doesn’t exist elsewhere on PlayStation VR. While Gun Club VR is perhaps a simple game, it is very good fun.

Because Gun Club VR contains some of the best, most exciting, and realistic feeling shooting on a platform that specializes in shooters, that’s why.

Concerned About Real World Guns In A Game? Not To Worry.

Before getting into the mechanics of the game though, let’s get something out of the way. Guns are a hot topic right now in the US, so there might be some players that cringe at the idea of real-world weapons being presented in a game. Having spent a lot of time with this game, I think there is little cause to worry.

Gun Club VR walks an interesting line, presenting its weapons with a gung-ho “Hooah!” sort of attitude. Responsibly shooting guns at the range can be very entertaining, and Gun Club wisely sticks to that dynamic. This is not some wild violence-training-simulator.

Curiously keeping a keen eye out for anything that anyone on either side of the gun debate might find objectionable, I found nothing. There isn’t much to Gun Club beyond an infectious enthusiasm for modding up guns and shooting them at cardboard bad guys (which is wildly entertaining).

Playing through the various scenarios in Gun Club, one gets the impression that they are part of a military or police training program, keeping the weapons strictly on the side of the good guys. That – and the fact that players are shooting at painted targets – should alleviate a lot of concerns.

The World’s Most Elaborate Shooting Range

Players start Gun Club VR with a small amount of cash to buy their first weapon. There are five or six pistols to choose from, some of which might be out of your price range in the very beginning. Never fear, because Gun Club tosses cash rewards at the player left and right, and before long you will be able to buy whatever you want. Gun Club wants you to have a cool arsenal.

The player is then taken to a warehouse shooting range. Various targets (painted to look like bad guys) pop up around the warehouse, and you shoot them. No big deal, right? Completing a run will reward the player with a cash prize, and their performance will be rated on a Bronze – Platinum scale. Then its off to the next level.

This all seems fine and easy, but this shooting range has a lot of tricks up its sleeve. As you progress into more difficult ranges, the bad guys eventually start shooting back, and will eat away at your health. Let your health counter get down to zero, and your run fails. No bronze for you, and no progression.

Sometimes bad guys show up hiding behind hostages. Sometimes they appear partially obscured behind obstacles. Sometimes multiples pop up at opposite ends of your peripheral vision. Sometimes they slide around on the floor, forcing you to take out a moving target. The various combinations of these configurations fly at you fast and furious, necessitating a real mastery of whatever virtual weapon you are wielding.

Of course, the player has a lot of ways to combat all of this shooting range trickery. Guns can be modded to an extreme level. Before long, my simple pistol was equipped with a flashlight, a laser sight, a stabilizing grip and a suppressor. With the help of all of these mods, I was standing stock still, holding my gun out in front of me with two hands and methodically knocking out chumps like Robocop.

You can also add larger clips to your guns, giving them an enormous capacity. This comes in handy because unlike a lot of games, you actually have to physically reload your gun on the fly. A click of a button ejects your cartridge, then you grab a replacement from your waist and slam it into place, pulling back the slide to put a round in the chamber. If you manage to do this in one smooth motion, a male voice cries out “YEAH!” in celebration, which never gets old.

There is also a variety of high powered ammunition to choose from, but after I had enough cash at my disposal I almost always went immediately to the most powerful ammo and skipped out on the intermediary selections. Why take several shots to drop a bank robber, when you can do it in one?

Tons Of Gameplay Options And Modes

After some time on the pistol range, other shooting options open up. There is a cool Zombie mode, where zombie targets creep towards the player menacingly. There is a “sideshow” mode, with various configurations of bullseye targets whirling about. And there is also a cool mode that has the player shooting a bunch of targets in the warehouse, then displacing to new positions.

Before long, Gun Club opens up a secondary area, which provides a lot of variety to the established gameplay loop. The “Allied” range is a World War II-themed area, dressed up to resemble a bad day in the European theatre. Enemy soldier pop up from behind downed planes, from the rubble of bombed-out buildings, and from overhead sniping positions.

The Allied range also has a version of the action/displacement mode, as well its own take on zombie mode, featuring – you guessed it – Nazi zombie targets. Huzzah!

Of course, there are tons of other weapons beyond the opening pistols. Shotguns, submachine guns, assault rifles and more can all be unlocked (all with their own mods and ammo). Purchasing any of these opens up even more chances to take a run through the various ranges, as each of the weapons has its own quirks and handling. Try shooting an assault rifle with one hand, and you will be plugging up a lot of holes in the ceiling.

All of this is wrapped up in a great pseudo-military presentation. Militaristic music clangs in the background of menu areas. As you gain levels (a largely symbolic progression system that doesn’t really mean anything), you are given military ranks to correspond.

This gives the game the trappings of modern military shooters, a slick presentation that will resonate well with shooter fans. Gun Club VR has its tongue firmly in its cheek in this regard, and it all the more entertaining for it.

Some Glitches and Weirdness

While the weapons are all unique and feel great to handle and shoot, there is some weirdness in the UI that could be improved.

The modding table, in particular, is difficult to deal with. This is an area that allows you to spawn in your mods, manually moving them around the gun and placing them as you like them. However, the way this functions with the controllers is never clearly explained, leading to a lot of flailing until you figure it out (pro-tip: press the Move button to let go of stuff).

I also ran into a repeated frustrating problem where my flashlight mod refused to light up when I was performing runs in a darkened warehouse. Though it made me feel like a superhero to make it to the end of these levels by instinct and sound, it would have been better to, you know, see. Exiting the level and re-entering sometimes fixed this issue, but not always.

But these difficulties were minor, really, compared with the fun I had buying, modding, and shooting the various weapons in the game. I will never have a chance to see most of these weapons in real life, let along shoot them, so this game provides a reasonable simulation.

Gun Club VR Is Cooler Than You Might Think

I can’t imagine how much work The Binary Mill put into the modeling of these guns and their ballistics. I’m not a big gun guy myself, but I respect the hobby enough to know that gun enthusiasts would call out inaccuracies immediately. To my untrained eye, it seems like these folks got it right.

It’s a difficult proposition sometimes to try to express what makes one game “fun” and another not. But whatever that indescribable, ethereal property is that makes it fun to stand in a warehouse and shoot targets with guns, Gun Club VR has it.

Gun Club VR is probably a no-brainer for gun enthusiasts, but VR gamers in general might want to take a look at this one. I frankly did not expect Gun Club VR to entertain me as much as it did. This is a game that only really does one thing, but it does it incredibly well. Sometimes, that’s enough.

Gun Club VR is exactly what it sets out to be - a game where you shoot real world guns on the world's most elaborate range. It turns out that all by itself, this is really fun. A bit of strange UI and glitchiness aside, Gun Club VR is well worth a look - both for gun enthusiasts and gamers that enjoy well made products.