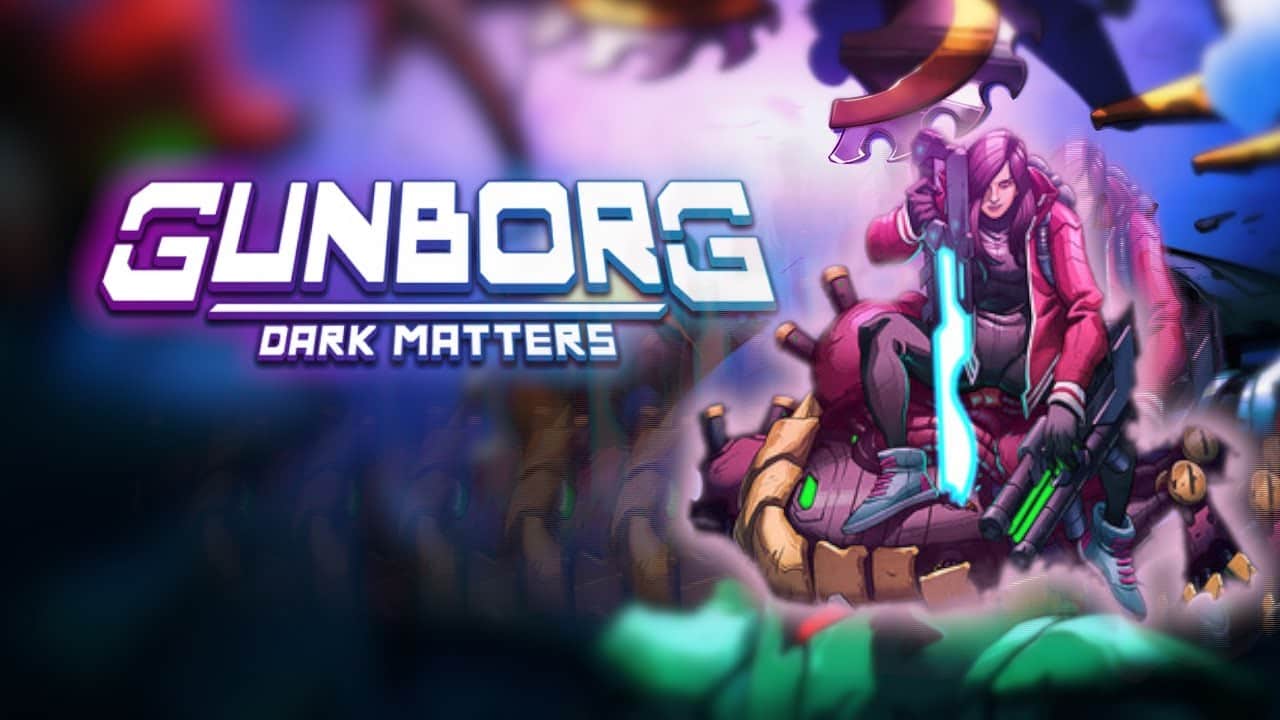 Gunborg: Dark Matters PS5 Review – In the sea that is the side scrolling genre, a new game needs something special to stand out. This is nothing short of a daunting task, considering the competition. Gunborg: Dark Matters is the latest offering to enter the fray, featuring responsive gameplay and one distinct gameplay element. This element caught my attention right away, and it most certainly delivered on its potential.

The premise is simple: You infiltrate an alien spaceship and capture the enemy aliens defending it. Along the way, you encounter all kinds of different enemies that all require different tactics to overcome. You only get a sword and shield to start, with any other weapons up to you to procure along the way.

The aesthetic calls back to an 80s synthwave style, filled with deep and vibrant contrasting colors that pop. This visual style translates well to the game’s combat just because it helps differentiate everything visually. The screen generally stays busy with projectiles, enemies, and obstacles, but the colors keep the chaos approachable. 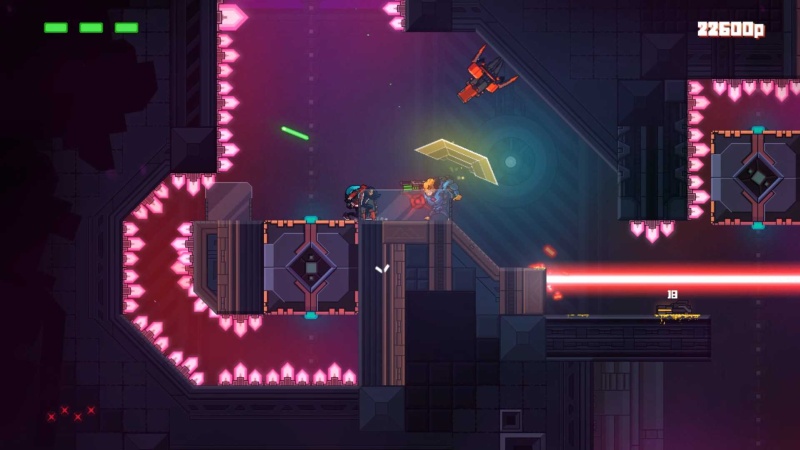 To make things even better, Gunborg runs at a silky smooth frame rate that never hiccups. The game doesn’t necessarily demand a great deal of processing power, but this further adds due credit to the development team behind Gunborg and the work they put into the game.

I always praise seeing complete button mapping in games, and Gunborg provides that very option. At the same time, I can’t imagine playing the game any other way than the default settings.

This comes down to needing the right joystick to aim your sword swings and gunshots while also needing some way to jump. It can work using the joystick and face buttons, but it’s too tricky for me to keep trying. Someone else might handle a different button layout, but they undoubtedly harbor more skill than I do.

The controls respond beautifully to your inputs, with no lag existing between your button press and its influence on-screen. All good side scrollers need this to succeed, of course, and Gunborg delivers.

Like I mentioned at the beginning of the review, Gunborg offers something unique enough to separate it from the general pool of side scrollers: an energy shield. It serves two functions: deflecting and traversing. You press L1 to activate your shield and use the right joystick to aim it, exactly how it works with weapons. 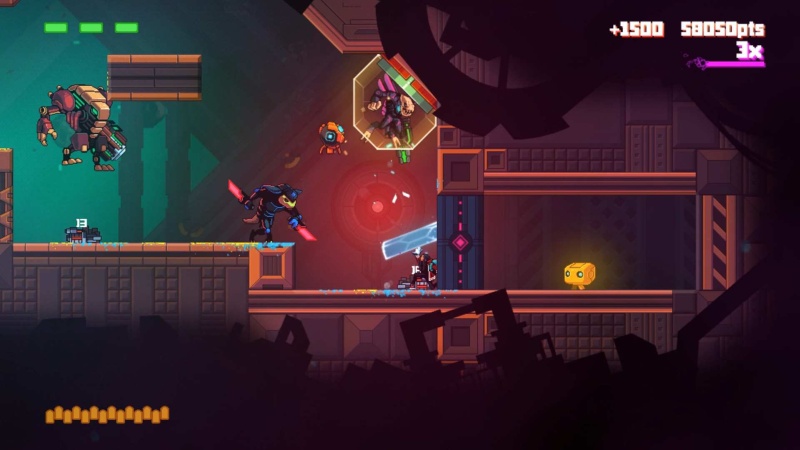 Using the shield to aid in traversing makes the whole package complete. Aim the shield below your feet, and you bounce over sharp or dangerous objects. Combine that with a double jump that resets every time you touch a surface, and you hold a ton of combat flexibility in your two hands.

The words on the page make it sound menial, but the flow of combat feels awesome because of the shield’s flexibility. To add consequences to the shield, you need to let it recharge a few seconds before using it again. The item deflects literally every projectile, but you’re still limited to only a few seconds of use. The timing window is generous at about three seconds, but you still need a sense of timing.

Gunborg feeds you all of its mechanics gradually yet quickly. Each stage only takes a couple minutes, difficulty depending, and each one either gives you a new gameplay element or a new challenge to overcome.

You learn to use the shield early on, but you learn about its other uses after a couple other missions. The game paces your growth naturally and doesn’t drop steep difficulty spikes on you. With three total difficulty levels, all players have a chance to succeed in Gunborg. 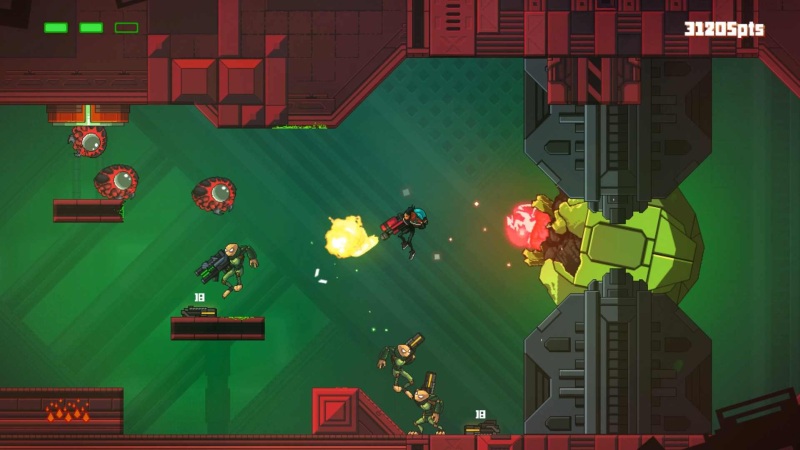 Gunborg’s biggest downfall is its length. It only took me a little over two hours to beat on normal my first time through. While I enjoyed my time, I didn’t have much reason to play through it more thoroughly than I did for the purposes of this review.

Apart from finding three collectibles in each area, the only replayability comes in the harder difficulties. On top of that, right around the time you start to feel in full command of gameplay, the game ends. Gunborg doesn’t overstay its welcome, but it also doesn’t give itself enough time to truly shine.

Equally so, Gunborg Dark Matters came together through the efforts of one person, Rickard Paulsson, and he deserves acclaim for creating such a polished product.

Gunborg: Dark Matters lacks much replayability and doesn’t last as long as the its enjoyable gameplay deserves, but Paulsson has put together a fine game nonetheless. With its fun gameplay and a generous increase in difficulty, Gunborg does enough to stand out from the general pool of side scrollers.

It’s just a shame it didn’t have more room to breathe, as Gunborg might have been able to stand among the titans of the genre.

Gunborg: Dark Matters excels with engaging gameplay, approachable difficulty buildup, and a wonderful visual style. The game is unfortunately all too brief and doesn't get the kind of time it deserves to truly bloom. Equally so, Gunborg places itself well high in the chaff of the side-scrolling genre, even though it doesn't quite reach the same full excellence as the greats.