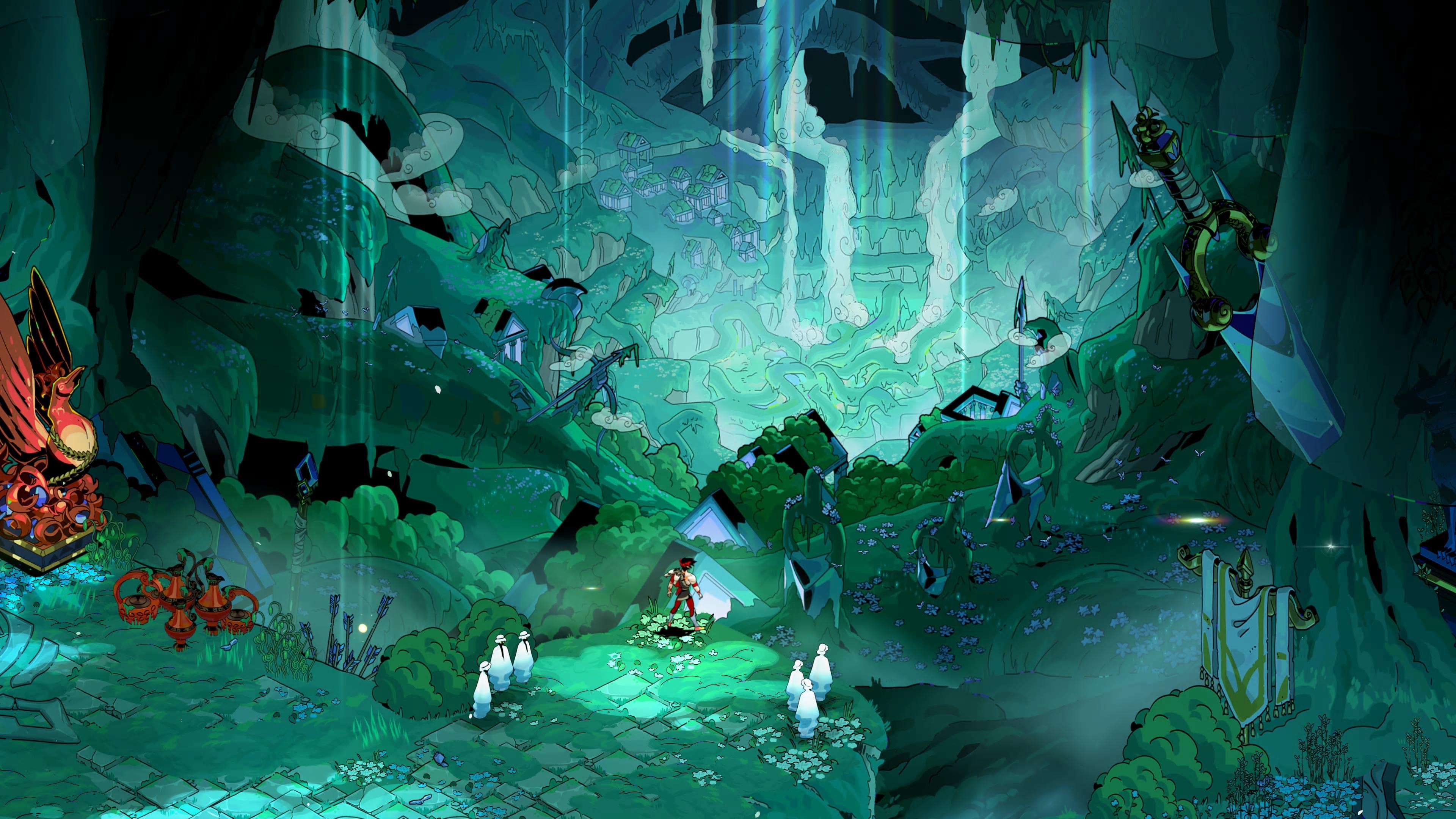 Hades PS5 Review – Developer Supergiant’s smash 2020 hit Hades has finally made its way over to PS5 and PS4, after already being available on PC and the Nintendo Switch for some time. It seemed like everyone in the gaming community could do nothing but gush over Hades when it released out of Early Access last year, and for good reason.

Simply put, Hades is a once-in-a-generation game for its genre, the kind that not only exceeds the expectations it set for itself, but goes beyond them to evolve the genre in which it exists and become the foundation for years of future developers to build off of.

For a more direct comparison, Hades is to roguelike games what Super Mario 64 is to 3D games.

Full disclosure: I played quite a fair bit of Hades on PC before getting to experience it on PS5. Though being ported to the PS5 has in the past for some games made the experience better thanks to additional features like full DualSense support or high fidelity visual upgrades, there isn’t any DualSense support to speak of in terms of specifically designed haptics or adaptive trigger functions.

The visual design of Hades doesn’t require much in terms of graphical updates, but just needs a solid frame rate for gameplay, which this version thankfully does have.

Being honest however, I probably would prefer to not have adaptive triggers or anything like that in Hades. The controls are re-mappable, and if you chose to set your attack to the shoulder or trigger buttons as I did, I could see it having a hinderance on my performance in game, so I’d have it off anyways if it was there.

Anyway, with all that housecleaning out of the way, lets talk about what really keeps you going in Hades, and what keeps you motivated for one more run every time you meet a bitter end. In short, it’s family. (Insert Fast & Furious clip here).

You play as Zagreus, child to Lord Hades of the Underworld and a mother who he does not know, but wants to, more than anything. In fact, that’s the whole reason Zag wants out of the Underworld in the first place, to find his mother. Along the way you begin to connect with the rest of the ancient Greek gods, as they are just discovering that they have a cousin/nephew.

While Hades does also have an excellent combat and upgrade system (which we will delve into later on), it wouldn’t all function so well if not for the narrative, which weaves itself nearly within all aspects of the gameplay.

Every single character you meet in the game is solidly designed, which in turn compels you to talk to them and ensures you want to keep coming back in a new run to find out what they have to say about anything. As such, it ensures everything within Hades feel incredibly grounded and real. It also helps that the voice acting is amazing across every character, as well as the writing itself.

This combined with the fact every interaction you have with these gods is vital not just to your current run, but future runs as well, and what you get in Hades is a wonderful marriage of story and gameplay interwoven to make you interested in both simultaneously.

Supergiant is without a doubt one of the best studios in the industry and their brilliant game design and execution of all its parts in Hades is what makes it a once in a generation game.

I don’t wish to spoil any big narrative details, because your discovery of the narrative is vital to the whole experience, but what I will say is that sifting through millennia of family drama between the Olympians in small, short conversations to try and understand how they feel about each other, about your father Hades, and about you will never get boring for me.

There is a lot more underneath that, like real family heartbreak and feeling of betrayal, but hearing these gods spill the tea on one another or throw shade is endlessly entertaining.

Interesting as each character and the narrative might be, the joy found in each conversation would be sapped if I had to trudge through poorly executed battles. Fortunately, Hades‘ combat system is both very robust and endlessly fun.

There are six weapons from which to chose from, though you only start with a few. As you progress you’ll unlock new weapons, though the rate at which you do so is both up to you and up to how quickly you get closer to the surface. If you want to try every weapon as soon as possible, then you’ll need to focus all your collecting of Underworld keys towards unlocking every weapon.

Once you do though you’ll notice that they each bring a great amount of variety and depth to the combat, though they all work within a similar framework of dodging and attacking when you have an opening, then quickly dashing to keep yourself moving and out of harms way.

Each area has a series of chambers you’ll travel through, most of them being combative ones where you can’t leave until you’ve defeated every enemy. You’ll definitely see the same designs twice, though Tartarus, Asphodel, Elysium and the Temple of Styx each have a very distinct look that helps to keep every chamber you enter feel fresh even if you’ve seen something similar before.

Your six weapons are a choice between a sword, a bow, a shield, a spear, a pair of metal fists and an ancient Greek semi-automatic gun. Each weapon has a name and bloody story behind it that dates back thousands of years, some like Coronacht the bow date back to the great war against the titans, others like the shield of Aegis date back to time itself.

They’re all very powerful in their own right and the upgrades you can acquire for each of them along the way can make them all very versatile, though it all really comes down to how you like to play. My weapon of choice will almost always be Coronacht, since I prefer to stick with mostly ranged combat and only going in close for a kill when I see an opening.

Whether you’re playing with the ‘God Mode’ feature on or not, it doesn’t take much upgrading and time with any one of these weapons to feel like your unstoppable, and as you improve at the combat with each new attempt, ransacking the Underworld and it’s souls with these mythologically powerful weapons gets more and more fun as you play.

It also helps that you have multiple conversations with your father, Lord Hades, about how you constantly smash up the Underworld and it is always in need of repairs. Sticking it to your father in this way was not only fun, but it was another great moment of the gameplay and narrative being interwoven, especially for something that doesn’t have a big effect on gameplay at all.

It Was Good Then, And It’s Good Now

When I first played Hades on PC about a month out of its full release, one of the first things I noticed on my monitor was that the game truly looks incredible. The Underworld is still able to be a dark, dreary place without everything having to be different shades of black, grey and brown. Everything is bright and colourful while still feeling ancient, like the last place you would want to end up for eternity.

Hades’ sound design and soundtrack also deserve their own shoutout, as often the music will swell at the right moment to help you make that one extra dash or push or attack to keep you going.

Everything I’ve experienced playing Hades on PS5 I have mostly already played in one way or another, though I still made new discoveries I hadn’t the first time thanks to different choices I’ve made. Even though I’ve already gone through many of the big moments you have when first playing Hades, they somehow never feel any less than playing through the same parts again.

Indeed, this is is really the key element for Hades as a rougelike; you’ll be playing through the same structure all the time but every run will always find a way to feel fresh and different from the last.

Aside from that, the initial ending still hits as hard as it did the first time, and while I won’t spoil it like I said earlier, I will reiterate what I said in that there is so much underneath all the family drama and gossip which keeps you interested. It made me emotional when I first played it, and it still was able to hit me in a similar way this time.

It’s no surprise at all that the BAFTA Game Of The Year for 2020 arrives on PS5 in top shape, but this release is just another example of how timeless this game truly is. I feel like I’d be hard pressed to every really get bored of Hades, and while I’ve already put in countless hours I know I’m just going to continue putting more time into the game.

In fact, while acquiring screenshots of the game and double checking spelling for some terms for this review, I had to shake myself out of a trance because just turning it on was enough to get me playing for a solid 20 minutes before I realized I wasn’t supposed to just be playing another run.

Hades is the new gold standard for rougelike games, as it is the whole package and more with excellent gameplay design and combat, wonderful visual design and soundtrack, all wrapped up in an endlessly interesting and entertaining narrative that at its core is about love and family.

Now if you’ll excuse me, I’m towards the end of a run that I’d like to continue.

Hades is an absolutely stellar experience that will keep you hooked in from the beginning, with a beautiful visual design and score, not to mention an excellent narrative and intricate gameplay that will keep you coming back again and again for just one more run.