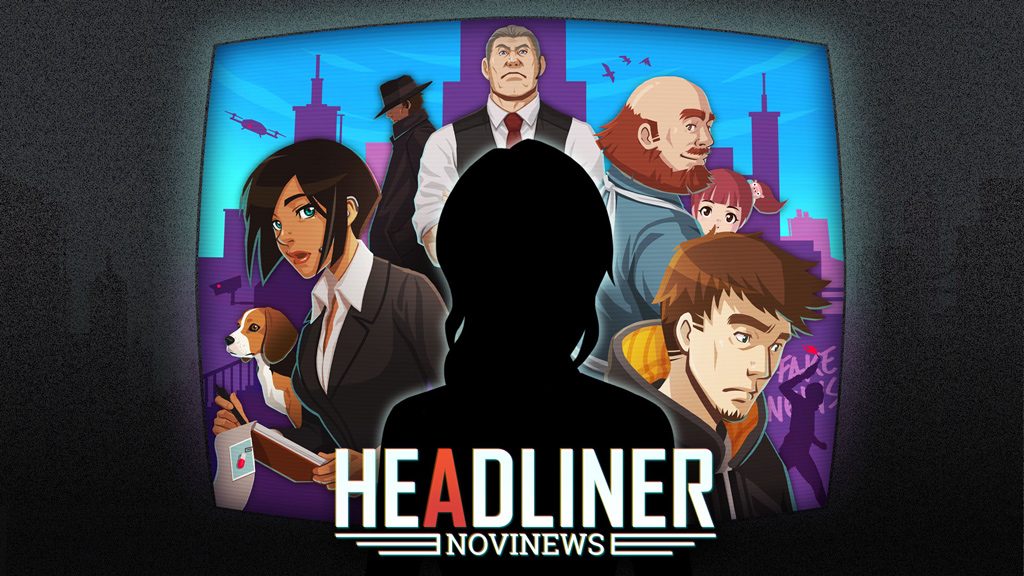 This is the news…public unrest grows after Wolff’s election victory means uncertainty for immigrants from Learis who will almost certainly be ejected from Novistan. The health service is also under threat, with privatization meaning the working classes will be unable to afford essential medical care. If this all sounds familiar, it’s a demonstration of how prescient Unbound Creations‘ news based adventure is. But does News + Game = Fun?

When Headliner: NoviNews was announced, I was instantly drawn to the original concept of how the player controlled the news output and the resulting effect it had on society. I was also intrigued by how the developer would approach the gameplay to avoid a dry office only environment. Their solution turns out to be an innovative mix of Papers, Please, This War of Mine and Skool Daze with a sprinkling of Groundhog Day thrown in.

Each day is played out in a specific sequence which begins with a briefing from the boss on how to approach the day’s reporting which is played out with some rudimentary conversational choices. He’ll advise favoring articles which help to promote the health benefits of the sponsor’s drink “Betterbuzz” and articles which tow the line with respect to the government’s healthcare and immigration policies. Whether you carry out these instructions is where you make your editorial choices and consequently see how the effects of the articles alter society.

Once you’re in the newsroom, you review the selection of articles from your reporters and either give them the green light, or dismiss them depending on how your want to portray the three key topics which make up the game: Immigration, the Health Service and the new drink craze which is sweeping the nation, Betterbuzz.

Usually, it’s a binary choice between articles which favor the government and those which question their stance on immigrants from Learis, the neighbouring country or whether the healthcare system is subsidized in order to make it affordable for the average citizen. You’ll also have the option of whether to report on violent crimes which occur and if so, whether the police are dealing with them competently.

If the subject matter sounds somewhat dry and serious, it is offset by the graphic novel style presentation which is bright and colorful giving the game a darkly comic tone.

Those Are The Headlines. Happy Now?

Once you’ve done your shift in the newsroom, you are released onto the streets to realize the effect of your editorial decisions. In 2D, your character walks left to right through the city, listening in on the citizens who comment to one another via speech bubbles what they think of the latest headlines. There is a smattering of NPCs which you can interact with, namely Evie the reporter who struggles with health issues and her immigrant status, your brother Justin a budding stand-up comic who suffers mental health problems, and the owner of the local shop where you can purchase items for your home.

Each one of the NPCs give their opinions on the news, whilst recounting more personal issues. You can respond in a similar binary way to the editorials and be either friendly and positive, or negative and obnoxious. As the two week game period progresses, your attitude to them will have a profound effect on their lives and you may be asked to step in and help them out should things turn out bad.

Your short walk through the city ends at your apartment where you can listen to the talk radio station discussing the news, see the city through your window and relax with your dog or drone, both of which can be adopted as pets when you come across them en route from work. There’s actually not a lot to do other than go to bed which ends the day, saves the game and returns you to the office the next morning where the cycle begins again.

Regardless of how you play the game, as the days go by, you will start to see society breaking down – scores of sick citizens vomiting in the streets, arson, homelessness and police drones swarming the streets. Your decisions will have an impact one way or another, so the carnage will differ depending on whether you support the government or if you deny the propaganda. Either way, bad things will happen to the people or Novistan and aside from resolving your personal relationships with your friend and brother, you are essentially swept along on a tide of civil unrest.

Where Now For Man Raised By Puffins?

Once your two weeks as ‘Headliner’ has elapsed, the game gives you a brief run down of your achievements in the job, before you start the whole game afresh. On the second time around, a new police NPC is introduced and you are given the option of helping her solve a murder, interviewing the friends of the deceased in order to reveal clues which you pass on to the police officer.

Alongside the additional thread of story, it was intriguing to do the polar opposite of my first play through, this time bucking a moral stance with some truly egregious editorial decisions akin to the British tabloid press. Satisfyingly, the game revealed a good deal of different results encouraging several further attempts. Each run through takes around one hour so replaying the whole game doesn’t feel like a chore initially.

However, the binary good/bad moral choices on offer scupper any further satisfactory attempts at completing the game as there isn’t enough depth or unique endings. A different character thread each time would have helped but the sense of deja vu in having to listen to and react to the same pieces of dialogue each time means that at most, the game only warrants two replays in order to reveal the majority of the possible outcomes.

Overall, Headliner: Novinews has some excellent ideas, great writing and characters, and an vibrant art style which softens the potentially sombre tone of the topics within. With a little more variety of moral choices and characters on each replay, the game would have enough depth to encourage numerous run throughs. As it is, there are a few hours of very enjoyable gameplay before the repetition starts to grate.

However with a wealth of trophies on offer and at this price point, it’s worth your time as an alternative adventure which tries something genuinely different.

Headliner: Novinews is out now on PS4, PC, Nintendo Switch and Xbox One.

Headliner: NoviNews tries something new in gaming - managing a news desk and influencing the welfare of the citizens with each day of published and suppressed articles. With a good balance of moral decision making, 2D exploration and interaction with NPCs, the only thing really missing is any depth. After a few repeat plays, you'll have had enough which is a shame as the few hours when the material is fresh is both enjoyable and thought provoking.