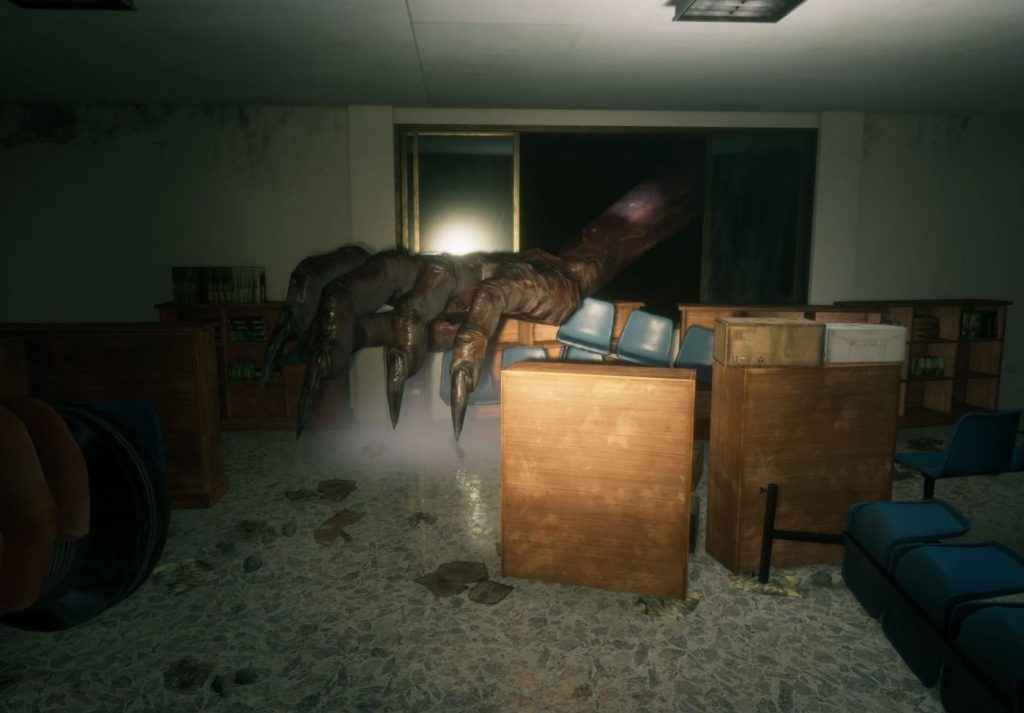 Long before the advent of VR gaming, there were not many games that scared me. Sure, the dogs that crash through the windows in Resident Evil made me jump, and I was somewhat unsettled the first time that I witnessed Pyramid Head abusing his mannequin friends in Silent Hill 2. But as a medium, the interactivity of gaming has always served to create an invisible wall between the screen and my emotions.

The act of being engaged in the action prevents me from entering the trance-like state that allows for true frights. I have often enjoyed scary games because I enjoy horror fiction and imagery, but I haven’t often found games to be actually frightening. VR has changed all of that.

In VR, the player is transported to a different world. As you wander through frightening environments, surrounded on all sides by foreboding images, silent triggers start yelping inside of you. Your mind knows that you are just playing a game, of course. But the reptile part of your brain, the one that controls the fight or flight mechanism buried deep inside of all of us, screams bloody murder the entire time.

There were moments in Home Sweet Home, the Yggdrazil Group’s horror title that was recently ported to the PlayStation VR, that frightened me so badly that I actually had to take off my headgear to collect myself. The interesting thing about Home Sweet Home is that, as a game, it coasts by with a minimum level of competency. There are all sorts of problems with the mechanics in Home Sweet Home that prevent it from being a classic. But the things that the game does well will live on in my memory long after the missteps that threatened to ruin the scary fun.

So while I might rant for several paragraphs about things that I found frustrating about Home Sweet Home, I want to make it clear that I’m recommending the game anyhow. It’s not the greatest game ever made, but it is one hell of a horror experience.

The horror imagery present in Home Sweet Home has its roots in Thai mythology, and those fingerprints are everywhere in the game. While the main characters have been anglicized for western audiences, it is clear from the very start that the game takes place in Thailand, with all of the cultural richness and welcome unfamiliarity that comes with that setting.

The game takes the time to explain the lore that comes into play through environmental storytelling. Of particular interest and importance is the legend of the haunting “Preta”, a restless and vengeful spirit that is forever hungry and thirsty. The entire game is steeped in Thai imagery, from the newspaper clippings to the graffiti on the walls, and the unique setting adds to the sense of displacement and disorientation for western players. Home Sweet Home begins with the protagonist, Tim, waking up in an unfamiliar room. It isn’t explicitly stated, but it is implied that Tim has been drinking fairly heavily, and he is disoriented and confused. Through some unclear circumstances, Tim’s wife Jane has gone missing, so he gathers his wits and sets out to look for her.

As he explores his surroundings, Tim quickly realizes that he has left the world of logic and reason behind, as he soon finds himself pursued through a nightmare landscape by vengeful spirits.

Well before the player is familiar with the mechanics at play, they are asked to endure what is arguably the most difficult sequence in the game. The first encounter with a spirit in Home Sweet Home will likely lead to many players experiencing repeated deaths, over and over again, until they finally figure out the correct steps to take to survive. This is frankly an awful way to start the game, but players should push through this sequence. Once you persevere and figure out what you need to do to survive, that knowledge will carry you through most of the rest of the game.

The majority of Home Sweet Home is extremely linear, following Tim as he explores a series of environments in his quest to locate Jane, avoiding ghosts and solving puzzles. The vaguest sketches of story are revealed through environmental clues (logs, diary entries, newspaper clippings), but many of these story items are so well hidden that the story might go right over many players heads.

After one level that I had meticulously explored, I was shocked to see that I had only found three of eighteen collectable items. While I thought that I had been picking my way slowly through the environments for clues, I was clearly looking in the wrong places.

Progression is occasionally gated off by some insidious puzzles. A few of the puzzles are extremely clever, requiring the player to search the environment for clues and then perform some mental gymnastics to come up with the solutions. Most, however, simply require the player to acquire a nearby object to interact with an environmental barrier (including one game of “find the keys” in Tim’s house that had me ripping my hair out). Beyond the obvious objects that are needed to move forward, everything else in the game is simply wallpaper. There isn’t a lot of interactivity going on here, and most objects and scenery represented in the game are just for show, placing Home Sweet Home right outside of the “walking simulator” category.

The game nonetheless does its best to keep players off balance, as the environments often shift and change around the player as you move through them. In a move that I recognized from Layers of Fear (another recent scare-fest), floorplans often rearrange themselves behind the player.

If barred from moving forward, it is sometimes a good idea to simply turn around, as a door that wasn’t present before may have mystically appeared. There are also a couple of nifty storytelling sequences that take place as Tim wanders his home repeatedly, and the rooms subtly change each time he enters them, denoting the passage of time and his mental deterioration.

Beyond exploring and solving puzzles, the bulk of the gameplay involves playing hide and seek with the various spooks and ghosts that stalk Tim. There is no combat to speak of in Home Sweet Home, with Tim (wisely) turning tail and hiding every time he sees a spirit.

Tim must sneak and hide to survive, as lingering for even a moment in the gaze of a spirit will lead to a swift and jarring death. It is this is dynamic that allows Home Sweet Home to turn the screws of suspense, taking players’ breath away with heart-stopping sequences and wicked jump-scares. When you are hiding in a locker, peering through the slots as some awful presence stalks about the room moaning for your blood, it is easy to forget that this is “just a game”. I found myself literally holding my breath, desperate to not be discovered by the awful chittering spirit that was searching for me.

The design of these bad guys is absolutely superb. Home Sweet Home uses VR’s ability to represent scale in some impressive ways, with one Preta in particular that looms over the player, towering impossibly into the sky.

And the first antagonist that player encounters in that frustrating opening (and beyond) is a classic horror villain for the ages, right up there with terrifying film villains like Sadaku from Ringu and Kayaku from Ju-On. This is a creation that is horrifying in its relentless pursuit of Tim, and its lamenting moans are utterly bone chilling.

The sound design in Home Sweet home is also stellar. Through the use of the insidious score, tension and suspense grip the player through the entire game, even in extended areas that contain no enemies. The swirling directional sound is also critical in helping Tim determine when it is safe to come out from hiding, although there are certain points when you realize that the demon stalking you is simply never going to leave, and you have to run for it.

The only real misstep in the sound department is the voice acting for Tim and Jane, but it is blessedly brief and none too frequent. Frankly, it is a welcome relief from the tension of Home Sweet Home to giggle at the stilted line readings.

Home Sweet Home is a fairly short game, and most players will probably complete it in a sitting or two. It should also be noted that though it is being promoted and sold as a PS VR game, Home Sweet Home can be played perfectly well outside of VR.

At one point, after I had been running and hiding a bit too strenuously, the first-person viewpoint suddenly turned on me and I started feeling a bit nauseous. I took off the headgear and found that Home Sweet Home plays very well in “flat” mode (though it is obviously somewhat less immersive).

It is clear that the Yggdrazil Group understands how to get under players’ skin. The horror aspects of Home Sweet Home are strong and pure, and the unique setting and lore are a welcome change from the zombies and maniacs that occupy so many games.

While the moment to moment gameplay of Home Sweet Home might feel clumsy and barebones at times, the scares in this game cannot be denied. I would tell you to play with the lights out, but in VR, it simply doesn’t matter. The lights are always out in Home Sweet Home, and what you can’t see may kill you.