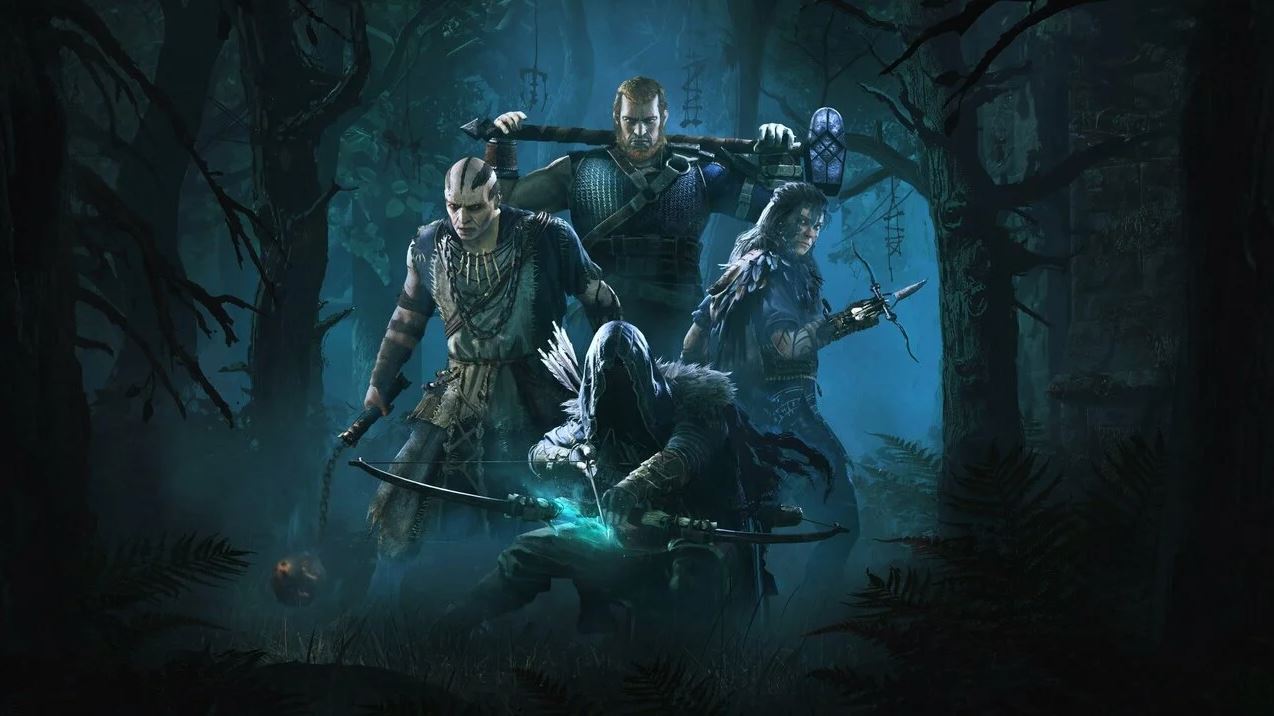 Hood: Outlaws And Legends PS5 Review – Hood: Outlaws and Legends is the latest multiplayer-focused title to try and carve itself a niche in a hugely saturated market. It’s a game with genuine ambition and good ideas, but is that enough?

Finding a comfortable spot in the multiplayer game arena these days is no mean feat. If you’re not ballsy enough to simply join the bandwagon of Battle Royale then a good, largely original, the idea is important, but it has to be implemented well, and then manage to catch the eye of enough people that it takes off. For every PUBG, Fall Guys, Rocket League, and Among Us, there’s a slew of failed stabs at new multiplayer experiences for a variety of reasons.

Hood has at least given itself a good framework to have a chance.

The Tug Of War

Set up as a Robin Hood reimagining where two teams of four players seek to outdo each other by sneaking about castles, keeps, and the like unseen (raising the alarm gets things locked down, and lets the other team know where you’re at). Your goal is to steal keys off burly Sheriffs (who can take you down in one shot if they catch you) and loot chests full of booty to redistribute amongst the poor of England, with a commission for the aforementioned looters themselves.

You split your match earnings between these two things, tipping it in favour of either you purchasing cosmetic upgrades or growing your home base. Every match is a tug of war for the war chest of cash once a team has secured the key to the vault and opened it.

The optimal way to do this is to have each member of your crew play as a different class. Hood features four upgradeable character types, all with their own unique abilities. Robin is your all-rounder type, good with a bow, and fairly quick. Took is a Mystic, complete with a long-reaching brutal flail. Marianne is stealth focused with an arm-mounted crossbow and the ability to vanish for a short time, and rounding out the group is John, a hammer-wielding, heavy brute who can carry loot quicker and easily obliterate foes. 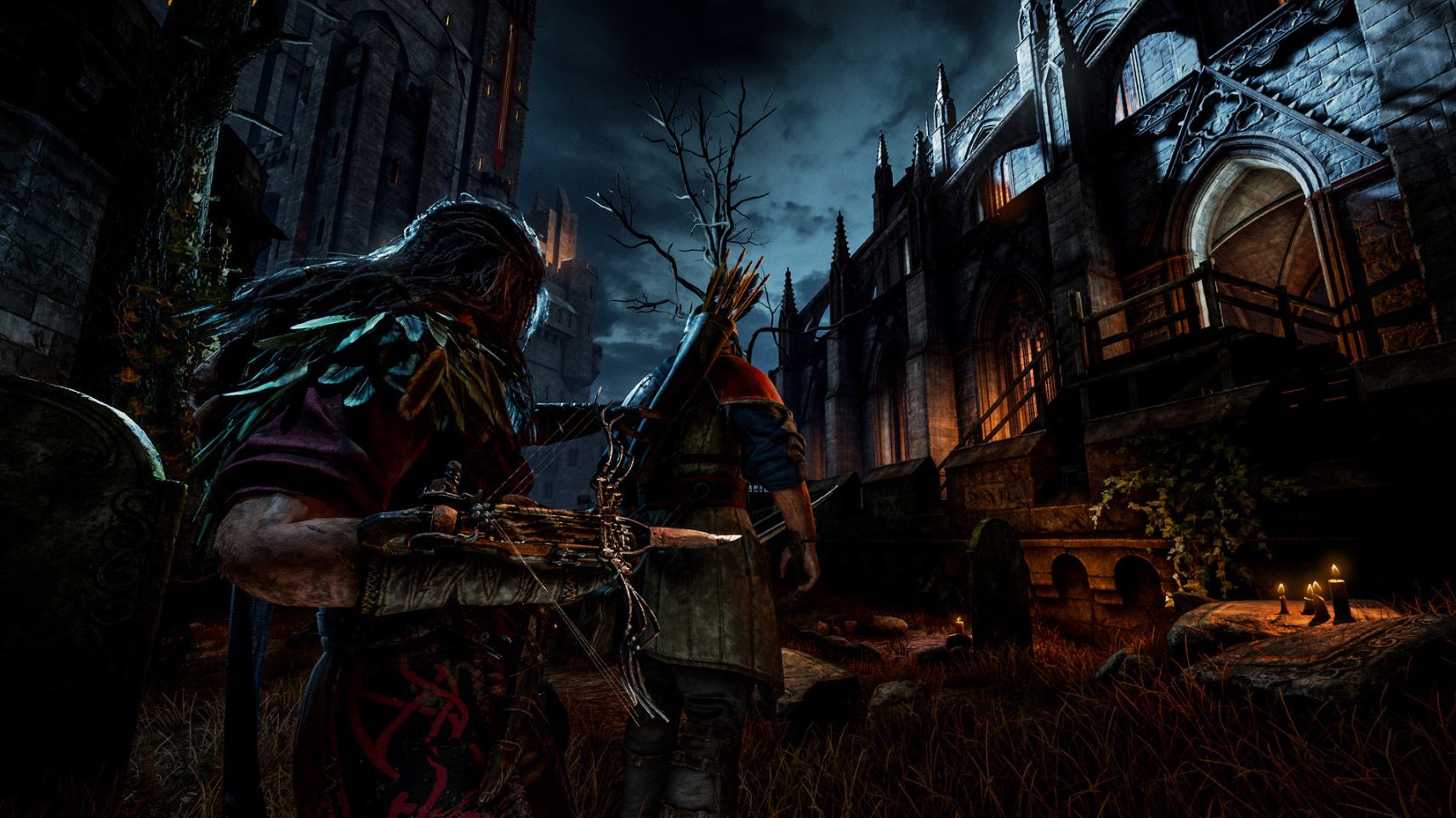 While you could feasibly all play as the same class, it’s currently not a viable experience in the majority of matches. Like games like Overwatch, overloading in certain skill sets leaves you at a huge disadvantage against a more balanced team.

Communication And Timing Is Key

As with any online game requiring teamwork, you don’t know what you’re going to get with strangers, so there’s a high chance of frustration even if you play the game as intended yourself. A couple of unruly teammates with a communication problem and the average player’s overall experience with Hood can easily be scuppered.

But developer Sumo Digital nudges the player towards vocal communication with mics set to be on as standard (to a fault, as you can often hear voice chat even after you’ve left a game whether you had it on or not). Obviously, there is a clear tactical advantage to audibly calling out points of interest and incoming threats, but Sumo has also ensured there’s a fairly clear method of communication for those not wanting to chat with strangers on the internet.

A press of L1 when looking directly at a point of interest or threat marks it for you and your team temporarily (netting you a few extra coins and XP in the process). 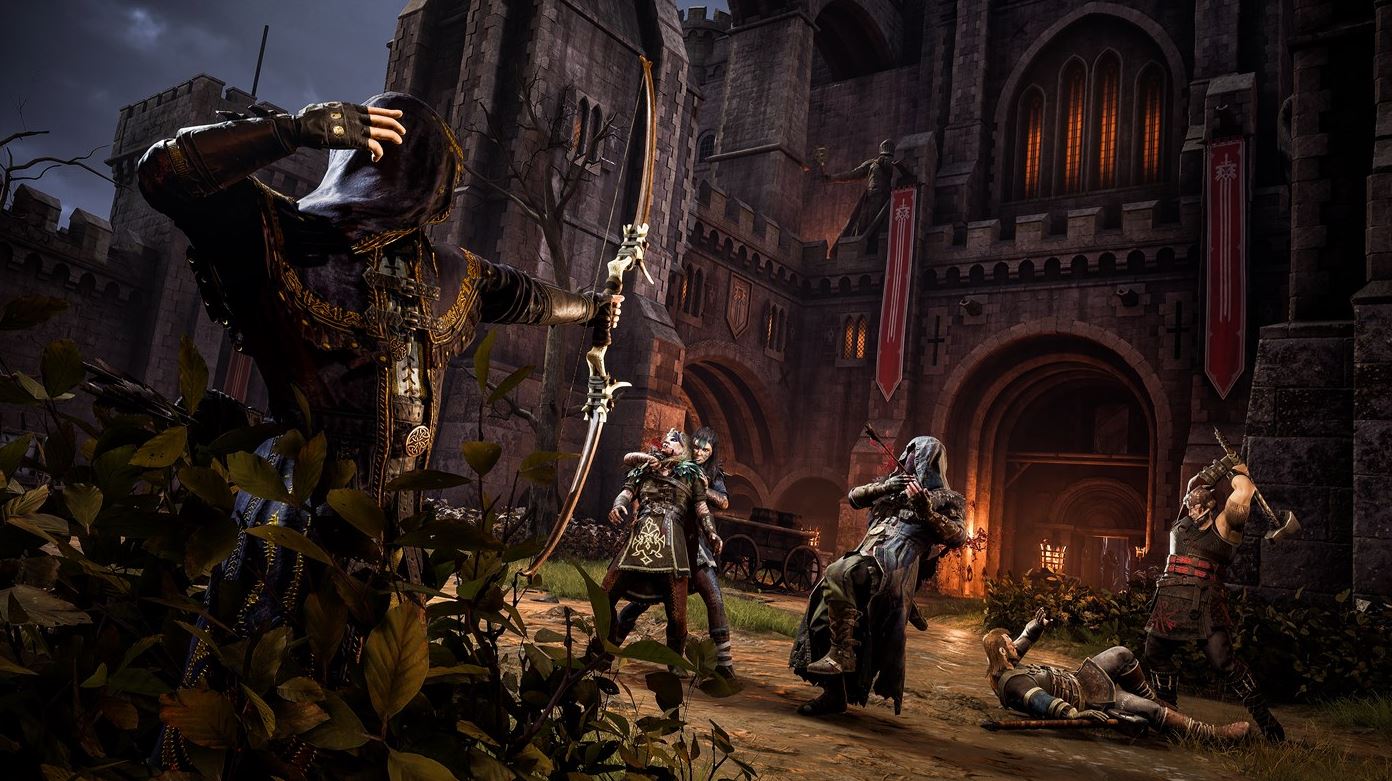 The maps in Hood are pretty dark and dreary (intentionally so) and as such, it’s quite easy for you or your teammate to stumble into the path of danger, but if one of you skulks around on high when securing the loot, for example, you can pick out targets for the muscle to take out before they ruin your plans

Outmanuevering the rival team of players, and the A.I. enemies, can be exhilarating, especially in the back and forth nature of a match’s climax. There’s a manner of caution and patience to how things play out.

While yes, you respawn upon death after a brief wait, those seconds it takes to get back to where the action is can be the difference between winning and losing a match. Knowing when to unleash a character’s special becomes essential (it takes time to be activated).

Marianne, for instance, could feasibly use her window of being cloaked to quietly eliminate the players guarding the vault, leaving the rest of her team to swoop in and pick the bones of the others and secure the loot for themselves, or Robin’s explosive arrow could wash out an entire rival team as they try to winch the loot to safety, tipping the scales in an instant.

As well as the individual skills each class brings, being useful in their own way for attacking and defending the objective, there are consumable tools to obtain in the field that can help turn the tide. Flash and smoke bombs can let you sneak by/assassinate A.I. guards and Knights discreetly, but also lets you provide cover when trying for the vault or escaping with the loot. Elsewhere, arrows for the likes of Robin and Marianne are limited but can be replenished on the map. It means you have to have some care with what shots you take, which feeds into the overall stealth approach of Hood. 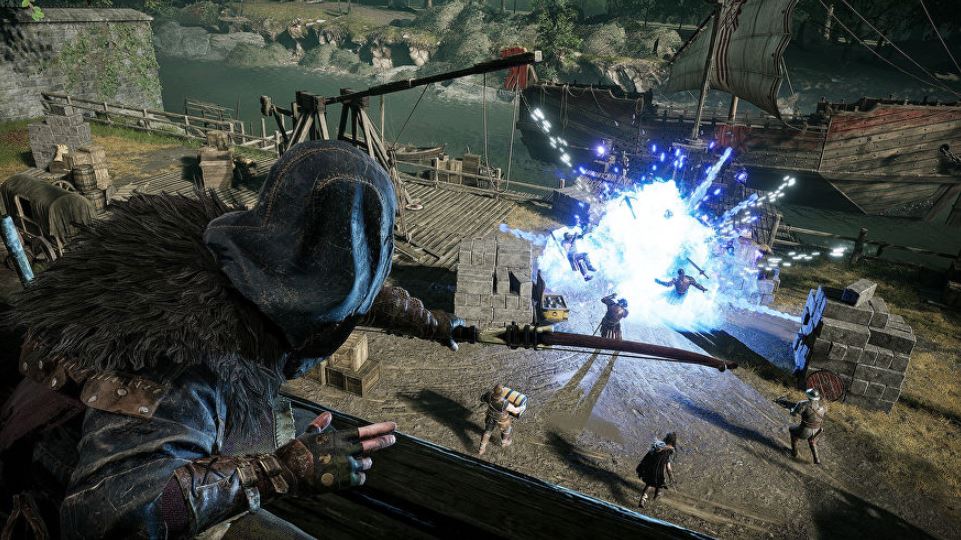 Work Still Needs To Be Done

Where Hood does need some work is in close combat. While it’s serviceable, there’s a very clumsy feel to melee strikes that doesn’t gel with these sleek professional thieves we are supposed to be. The pace of it works against A.I. just fine, but throw in human interference and things get messy quick. You could argue it’s not supposed to be the focus of a stealth-based multiplayer title, but when the likes of Took and John rely on it, it’s somewhat unavoidable as problems go. Using melee combat as those two is at least swift and brutal, as Robin or Marianne, it can be a drawn-out death wish.

The other issues Hood could yet face are a part of that old vicious cycle of launching a multiplayer game. Will technical problems, few as there are by multiplayer launch standards, be tweaked and fixed? And if so, how soon? Is there more to come in terms of maps and modes? Because while the core of Hood is interesting, it is rather slight in terms of variety at this time, and again, can that come in time before the player base loses patience?

Already it’s gotten harder to consistently find a match in decent time and while this isn’t the fault of the developers, in my opinion, they’ve made a really interesting multiplayer title that evokes the old Assassin’s Creed multiplayer fused with the PvPvE intensity of the underappreciated Hunt: Showdown. The more complex a multiplayer game is, the fewer mistakes can be made in that launch window without making extra work down the line to remain in the race. 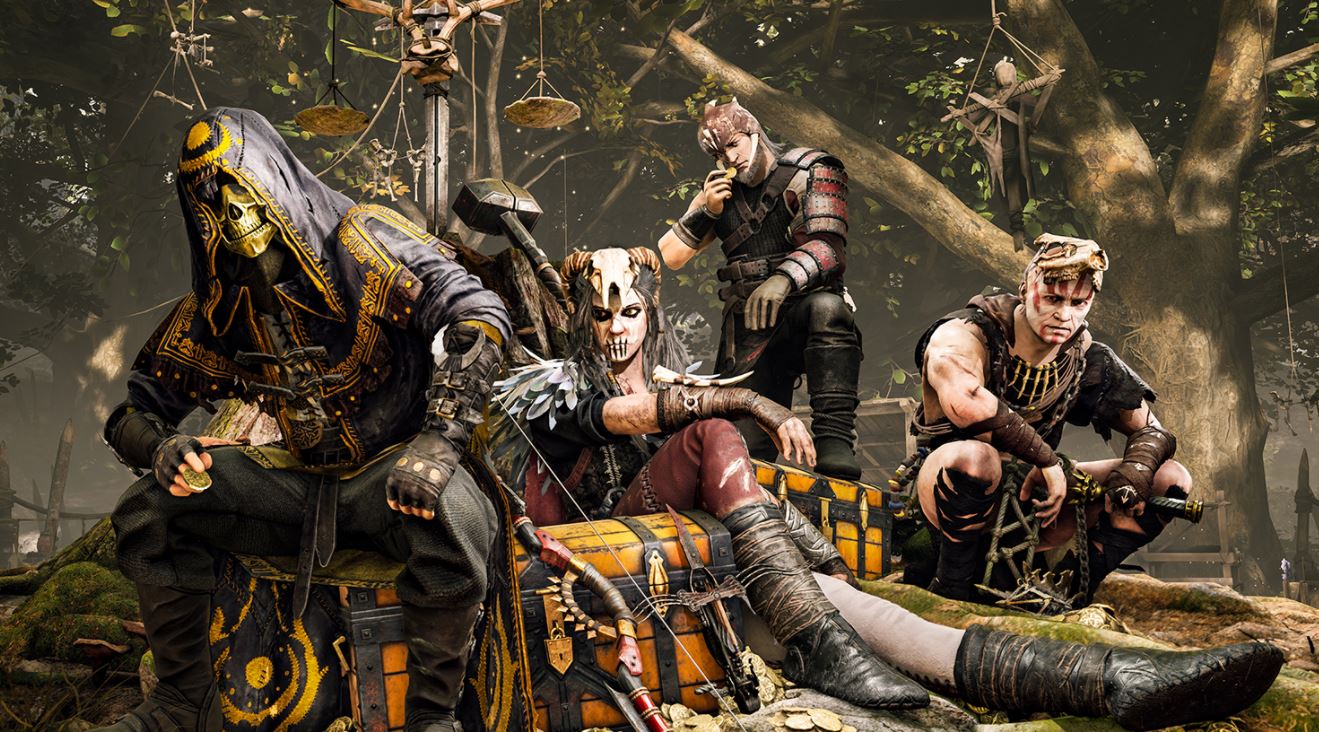 A Solid Multiplayer Experience With Hope For The Future

With a smart price point and an intriguing hook, Hood: Outlaws and Legends has the tools to see out the journey beyond launch, hopefully, fate ensures it navigates the speed bumps along the way with care. Despite a lack of variety, Hood has its own ideas that help it stand out in the crowded multiplayer market.

Hood: Outlaws And Legends is available now for PS5 and PS4.

Hood: Outlaws and Legends is a genuinely refreshing multiplayer idea that’s well-executed for the most part. It’s a little light on variety and doesn’t offer all that much in terms of reward beyond winning matches, but there’s a consistent joy to be found in its often intense back and forth tug of war for gold and glory.