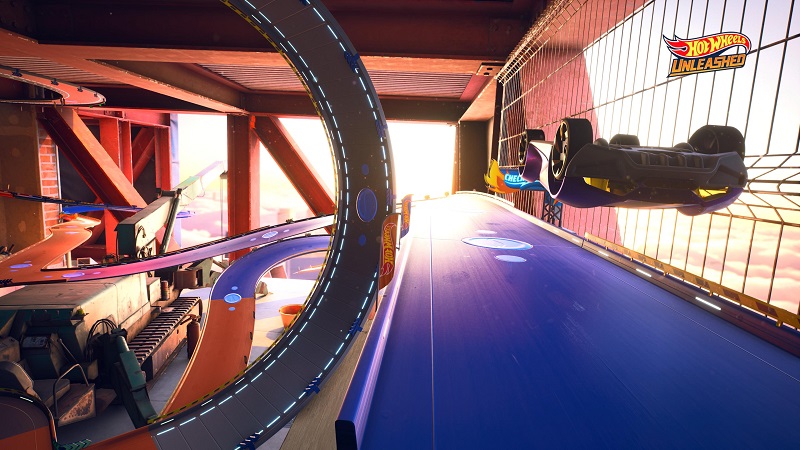 Hot Wheels Unleashed Review (PS5) – If you had said to me that Hot Wheels Unleashed will be not just one of the best games to come out of 2021, but one of the best arcade racing games in a long time, then while I would have liked to believe you I’d probably be pessimistic. It’s the kind of pessimism that only comes when you imagine a childhood thing you love is being revamped for the modern era.

Thankfully I can report my pessimism was poorly founded. Hot Wheels Unleashed is in fact both those aforementioned things as one of the best games to come out this year and it’s very arguably one of the best arcade racers we’ve seen in a long time.

It’s All About The Collection 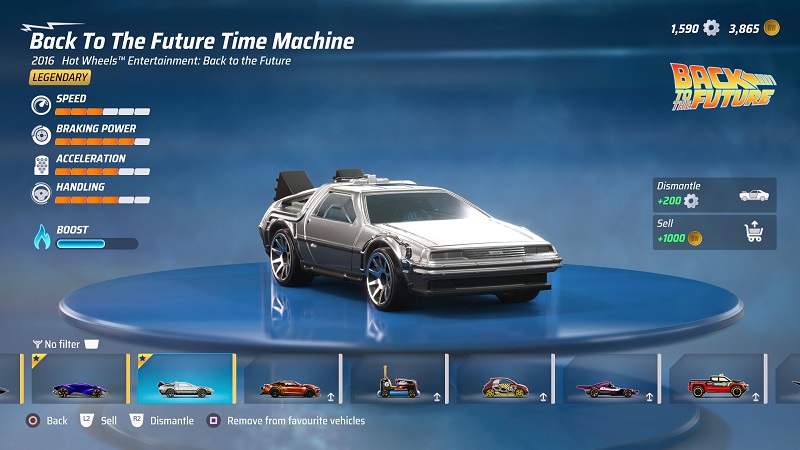 I used to own plenty of Hot Wheels cars as a kid and even had a small suitcase for carrying them around. My sister and I would build tracks together, sometimes using the instructions to build the one on the box, or breaking up the pieces and combining them with previous sets we had. The fun we had created memories I cherish, so you can imagine my joy when I got to play Hot Wheels Unleashed and see that a game aimed at capturing that experience was given the attention to detail, love and care. It needed to be really, really good.

I definitely didn’t have every car that’s in the game in my own collection, but just recognizing the ones I did was so incredibly cool to see. They’re all recreated beautifully, it’s almost incredible how good these little metal and plastic cars look, but that’s also key to the experience when playing Hot Wheels Unleashed because the driving force (pun intended) behind everything is to build your collection of cars.

The biggest rewards you earn in the single player mode are blind boxes to open, each of which could contain your next ultra-rare vehicle, something you already have or anything in between. This is also where Hot Wheels isn’t really a perfect game, but we’ll dig more into that later on.

More than just cars, you’re also collecting, albeit at a much slower pace, different elements to add to your track builder. Growing up, the core Hot Wheels experience for me was always more focused on collecting the cars, but part of it was also collecting different kinds of tracks so you could eventually build one giant ultimate track. Both of those aspects in Hot Wheels Unleashed feel very well represented, particularly in how the track builder really allows you to create the wildest track you can dream up.

Highway To The Danger Zone 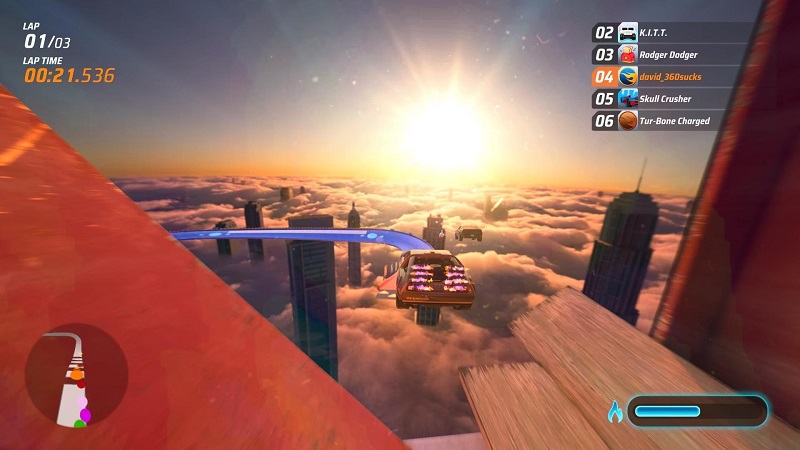 Hot Wheels just wouldn’t be the same without incredibly inventive and crazy tracks, something that Hot Wheels Unleashed delivers on tenfold. There’s plenty of time to be spent in the single player portion of the game, the first time you see the map can almost be overwhelming because there looks like so much to do. Depending on how well you do in each race though, you can start marking challenges off the list, as you explore all the different tracks the developers created for the game.

The words “crazy” and “fast” are almost understatements when describing the gameplay. Plenty of these tracks are challenging, and they’re challenging at a very, very fast pace. Crazy and fast are the two main drivers in the gameplay because that’s pretty much all there is to it. There’s no combat whatsoever, so no items or anything of that nature. You have your boost, which can vary between vehicles in regards to how you use it, and that’s it.

This stripped down gameplay is by no means bad, it’s actually what really makes Hot Wheels Unleashed stand out. Hot Wheels have always been about going fast, and developer Milestone rightly leans into that. The trick is being able to go fast while jumping across a giant gap, landing immediately into a sharp turn and boosting past a giant blue spider who loves nothing more than to pray on tiny toy vehicles just looking for a laugh and a race by shooting webs at them, stopping them momentarily on the track.

Giant blue spiders aren’t all you’ll deal with of course, as plenty of iconic hazards from different Hot Wheels collections are included in the game. The spider is actually one of the least dangerous hazards, as the Yeti leaves spots of ice all over the whole track for you to freeze your wheels on, there’s a dragon who will burn your car to a crisp and a snake who loves nothing more than to bite down on your chances of winning. All this to say that the tracks themselves can be treacherous, on top of how difficult they can already be to manoeuvre on without falling off. 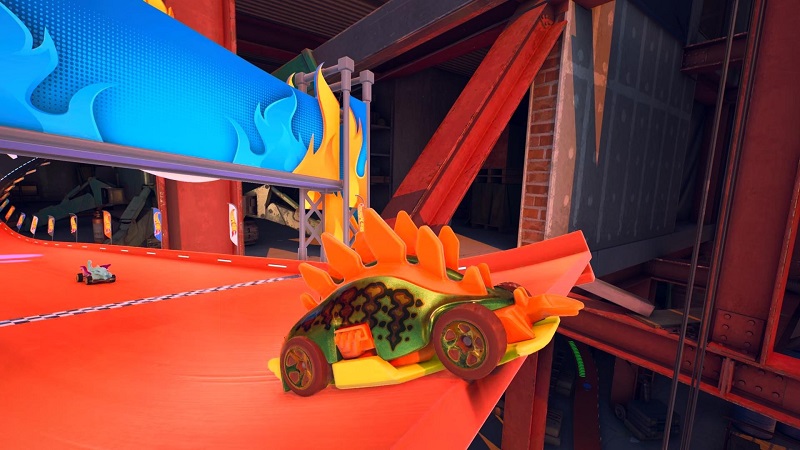 The difficulties that come with the tracks make them each unique and fun, but what doesn’t make them fun however is their length. Not every track has this issue, and some of them are meant to be long by being a one way course rather than a circuit, but those lines feel difficult to determine when you have circuit tracks that have laps that are potentially upwards of three minutes long. Arcade racers are almost always at their best in short, fun, creative settings, and at times it can work to stretch out the track to shake things up.

It’s essentially just a lack of balance between the two types that causes a problem. The longer the track the more opportunity you have to make mistakes, the less enticing it is to restart the race after you’ve made an error you absolutely cannot return from – like falling approximately seven feet from the top of a bookshelf in a college campus.

You can respawn, but the pace at which these races move and your limited ability to boost can make it impossible to catch up, and in the single player portion, you can only move on from a race after you’ve won or at least made the podium. It’s faster to just restart, and when that happens at the tail end of a track for whatever reason, the thought of going back and doing it all again makes me want to put the controller down more than pick it back up and keep going. That’s even with the lack of any real load times on my PS5, and I can’t image the load times on PS4 making that experience any better.

Feel The Speed – And The Struggle 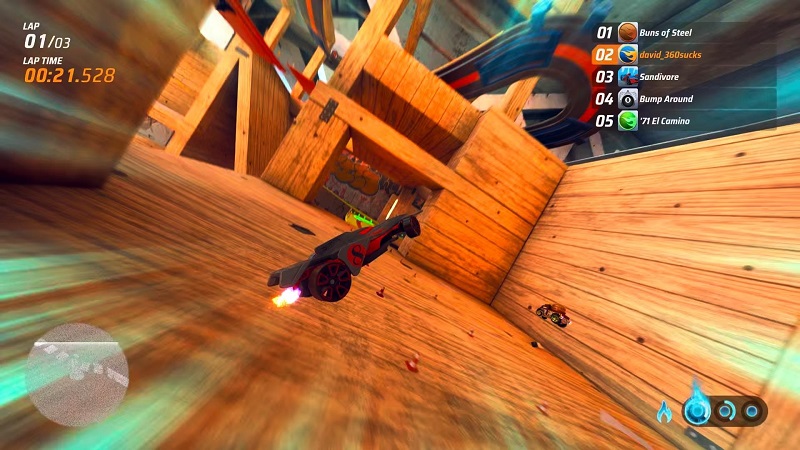 As much as there are things in Hot Wheels Unleashed that can make me want to put my controller down, what keeps it in my hands is how amazing it can feel when everything about the game comes together. Flying through a a big jump into a loop and then reaching the finish line at the top of a volcano while driving a car that looks like a dinosaur feels pretty incredible on its own but the cherry on top comes from the DualSense.

Maybe it’s the fact that I’ve spent so much time with the same plastic toys that are beautifully recreated in Hot Wheels Unleashed, but the haptics felt like they could almost convey the feeling of the track, of each surface you drove on and each car you smack into. Moreover the adaptive triggers are even more impressive, as you can carefully and precisely use them to apply just the right amount of brake power for accurate drifting around tight corners.

Hot Wheels Unleashed isn’t a perfect game of course, made evident not just by the seemingly incredible amount of extremely long tracks but also by the Track Builder’s biggest failure currently; the UI system. When you first jump into the builder you’ll be hit with a tutorial which you need to complete in order to get building yourself, but most of the time you’ll spend in the builder will be trying to find some kind of flow and understanding of the UI to go along with it. It can get better the more time you spend with it but the foundations of the system are already confusing, and there’s no tutorial focusing on what makes a good track rather than just how to use the builder.

Hot Wheels Unleashed is one of the best arcade racers in the genre right now. That’s something I never really expected to say when I first embarked on this review, but it’s true, and I’m more than here for it. Any frustration I felt and flaws I found did very little to dampen my enjoyment, even though they were consistently evident.

Milestone has revitalized the Hot Wheels brand in gaming with this title, which means it really could only be the beginning. I hope that is the case, and we can continue to get new and exciting Hot Wheels games in the future, if this is any evidence on what we can expect.

Hot Wheels Unleashed is available now for PS5 and PS4.

Hot Wheels Unleashed is an excellent arcade racing game with some truly inventive and crazy tracks, wonderfully recreated Hot Wheels toys that drive beautifully and the visuals to back it all up. Unfortunately an imbalance of reasonably long to extremely long tracks and their many hazard risks make it too easy to get frustrated when struggling to reach top spot, and the track builder while very well detailed fails to make the user experience anything but pleasant.