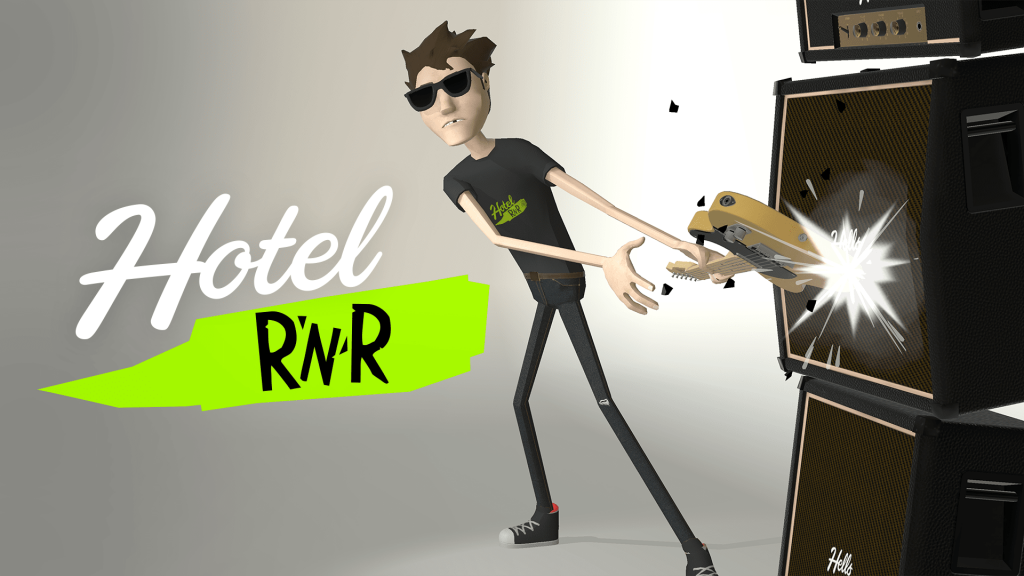 Hotel R’n’R is a great pandemic-era accompaniment to the recently released GORN. Both games are celebrations of cartoon violence, though they are very unique in content and tone. I’m quite sure that when the (rather brilliant) developers at Wolf & Wood decided to set aside horror games for a bit (they’ve created The Exorcist: Legion VR and A Chair in a Room: Greenwater) and focus on something lighter, they had no idea that by the time Hotel R’n’R released, the world would be on fire and everyone would want to smash stuff, but here we are.

Great timing aside, Hotel R’n’R has some real gameplay hooks that dig into the destructive fantasies of so many young people – the desire to party hard and wreck a hotel room. Not in a high-school-kegger sort of way, but in a light-the-bed-on-fire-and-throw-the-Roomba-in-the-pool sort of way. The destruction in Hotel R’n’R starts out fairly light-weight, but by the time the game wraps up, you may find yourself cringing at your own impulse to obliterate private property.

Your Destruction Is Only Limited By Your Own Creativity

I awoke to find myself in a flamingo-themed hotel nightmare somewhere out west – a fairly luxurious suite, with southwestern art deco furnishings circa 1966, save for the tiny knee-high robot beeping around on the floor. A pair of sliding glass doors led to a nice-sized balcony, overlooking the swimming pool below. I knew in my heart that this place had to go.

Looking in my suitcase, I saw that I had a can of spray oil, my trusty zippo, a pair of tomahawks, a glue gun, and an old-timey revolver. Knowing that I needed to do as much destruction as I could without drawing attention to my room, I figured I ought to do a little prep work. I started stealthily gathering any flammables I could find and stacking them in a heap on the bed. Then I went to the balcony and piled all of the porch furniture together for easy access.

I got the glue gun and went to the kitchen. I carefully began glueing the toaster and microwave together, and then added other various objects from the countertop; bottles of whiskey, flower vases, whatever was handy. Pleased with my work, I set my creation aside.

Making my way to the bathroom, I considered how best to cause water damage. I turned on the bathtub and then went to retrieve my revolver. Standing above the tub, I knew that as soon as I fired the gun, I would be on the clock. It would only be a matter of 60 seconds or so before the maid arrived to check on the ruckus. Figuring that I was as ready as I would ever be, I fired the gun, splitting the tub in two and letting all the water run everywhere.

I quickly ran out of the bathroom, cutting across the balcony to hurl the pile of furniture into the pool. I could already hear the sounds of the maid being summoned to the room, but I knew I had enough time to set the bed on fire before going to the door to block her path. Having done so (the flames caught quickly and started spreading in a very satisfying way), I hustled to the door to block the maid’s attempts to enter. Frustrated, she turned away and started calling the manager.

I knew I had another minute before the manager arrived, so I ran and grabbed my tomahawks. There was a Tiki bar that needed my attention in the corner, so I ran through the gathering smoke to the bamboo monstrosity (knocking over a stack of expensive amplifiers on the way) and got to work chopping it to hell. I could already hear the manager bustling at the door, so I ran over and grabbed my toaster creation and managed to get there just as the hapless fool opened the door.

Blasting the manager in the face with my glue-gun-created monstrosity, I ran back into the room and plunged it through the glass top of the kitchen table. Then I grabbed up my tomahawks again and took out a lovely wall display. Security was on the way, and I had to get out of there or risk arrest, so I ran to the suite door and made my escape.

This was a satisfying run, over in only about three minutes. I collected my earnings from Satan, and re-upped to try again. Thirty seconds later, I awoke to find myself in a flamingo-themed hotel nightmare somewhere out West.

The Loop of Hotel R’n’R Is Enticing, But Progression Is Slow

The loop of Hotel R’n’R is pretty fun. Wake up in a hotel room, do as much damage as you can, and don’t get caught by the series of hotel employees that show up at the room to stop you. You are a rocker who has made a deal with the devil, who apparently has a grudge against the hospitality industry. Do a ton of damage to hotels and gain in infamy, and he will make you rich and famous (at the eventual cost of your soul, of course).

You start out in a tiny motel room in the middle of nowhere with nothing but a foam finger in your suitcase, but each trip you earn a little bit of cash that you can take to Hotel R’n’R’s “Pawn Shop”. At the Pawn Shop, you can spend your devil-bucks on new and better destructive gear – all of which can eventually be leveled up. Meet certain conditions (do x amount of damage without getting caught, do $400 in water damage, knock out the manager with a fish; you know the drill), and you gain infamy, unlocking bigger and better hotel rooms to destroy.

All of this combines to unlock your creative juices, and tearing the hotels apart is a world of fun. You move with a GORN-style waggle of the controllers, but this style of motion control feels better implemented here then it was in that destructive spiritual sibling.

Wolf & Wood are the folks that made The Exorcist: Legion VR, which had a surprising amount of object interactivity. They use that experience here to allow players to really go nuts, and everything feels just as it should. The dev team also wisely included a crouch button to grab stuff off the floor when you drop it. Thank the lord.

If there is one thing that bothered me about Hotel R’n’R, it was that progression felt very slow. Some of the better objects in the pawn shop (and there are a LOT to choose from) are prohibitively expensive, turning the acquisition of funds to purchase them into a bit of a grind. I still enjoyed every run, and eventually unlocking the good stuff (C-4!) is a treat, but I would have liked things to move just a smidge faster.

A certain amount of twitchiness is expected in VR gaming, and Hotel R’n’R is no exception. Objects behave strangely on occasion, and at times your arms get a little off-kilter. But in general, this is a game that falls on the more-technically-solid side of the spectrum. This is a bigger game than expected, and it stays solidly entertaining the whole way through. There is a fair amount of strategy and planning involved in hotel destruction; go in willy-nilly just punching things and you won’t get very far.

Hotel R’n’R isn’t going to change the world, but it is super fun. It is just flat out enjoyable to smash stuff up, and I think that a lot of people will find themselves happily lost in this destructive mayhem for hours. The first time I set my room on fire, I was so delighted that I forgot to escape, eventually dying while watching it burn. This is video game therapy, friends, and I am 100% here for it.

Hotel R’n’R is currently available in the PlayStation Store.

Hotel R’n’R allows players to engage in an ultimate fantasy – being a rock star and smashing up a hotel room. With solid controls and a fun game loop, Hotel R’n’R will call players back again and again for one more round – even if the progression feels a bit slow. This is a solid game with a wicked sense of humor. If you suspect that you will like Hotel R’n’R even a little, I’m here to tell you that you will love it. Rock on.