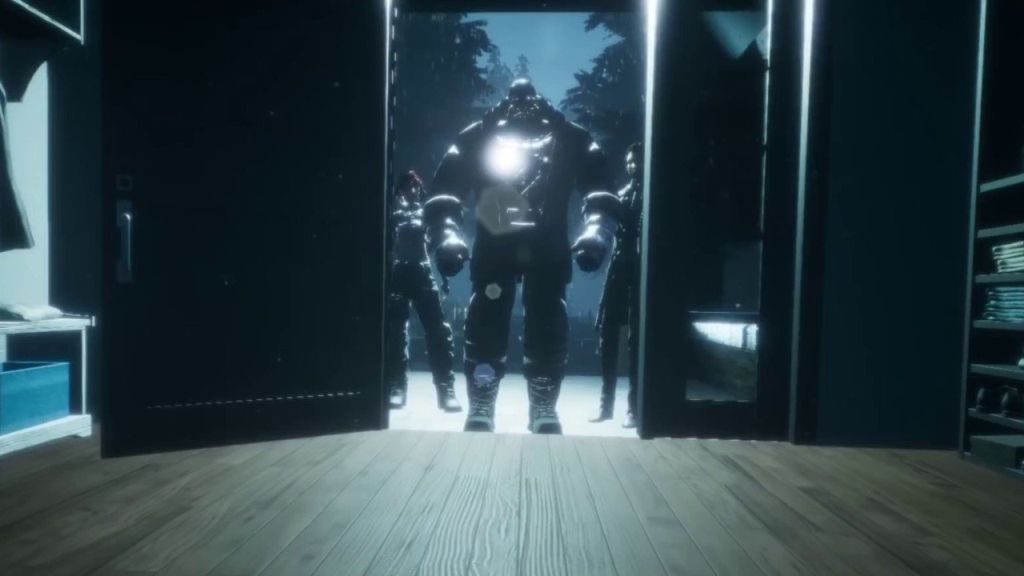 The house featured in Intruders: Hide and Seek for PS VR is nicer than my house. Significantly nicer.

The House Is The Star Of Intruders

After a short car ride to introduce the family of four at the center of the proceedings, players arrive at the family’s “vacation home”, which is so beautiful and lavish that I was forced to wonder what the family’s primary dwelling looked like.

Decked out with contemporary furniture, platform beds, a gorgeous two-story library (all dark wood and shadows), and a wine cellar that seems to go on for days, this is a home for the ultra-wealthy. The first time I saw it, all I could do was wander from room to room, looking at everything and muttering “Damn…”. 99.9% of the world’s population would probably happily trade their homes to live in this family’s “vacation home”.

It’s a good thing that this labyrinthine dwelling is such a visual marvel, because outside of the car ride and a short vignette towards the end of the game, Intruders: Hide and Seek takes place entirely in this house. And that’s fine, because it is the claustrophobia caused by being trapped in this giant but ultimately unescapable home that allows Intruders: Hide and Seek to be the success that it is.

Intruders’ Story Is Well-Worn But Engaging

Players take on the role of “Ben”, a pre-teen boy, arriving for a month long stay with his aloof-scientist dad, nondescript mom, and his sickly little sister (picture a female Chucky doll that coughs all the time). Dad has been entrenched in a long project at work, and the family is looking forward to a little time together.

Towards the beginning of the game, the voice performances bringing these characters to life are strictly of the “Jill-Valentine-Master-Of-Unlocking” variety, and the fact that the children’s voices are clearly acted by adults attempting to sound like kids is a bit distracting. But once you settle into Intruders’ B-Movie wavelength, these performances normalize somewhat.

A brief period is spent settling into the house and teaching the player Intruders’ movement and hiding mechanics (during which I highly recommend ignoring the story prompts and wandering about to get the lay of the land). But before long, Intruders gets down to business.

In the middle of the first night – when the kids should be in bed but are instead snooping around the house – three strangers appear and take mom and dad hostage. With the phone lines cut, the internet secured, and the house locked down in panic mode, Ben and his sister find themselves on their own, trapped in the house with three violent intruders.

Over the course of one long night, the siblings must stay hidden from the three invaders, while figuring out how to rescue themselves and their parents. Along the way, Ben can’t help but learn why the intruders have arrived and what their motivations are for capturing mom and dad. Spoiler alert: it isn’t money.

From Intruders’ artwork and pre-release press, I expected the game’s story to be far more hardcore than it actually is. For some reason, I had assumed that I was going to be witnessing some serious ultraviolence, with the intruders slowly disassembling the parents with pliers, hacksaws, and blowtorches.

This is not the case, as Intruders keeps things strictly PG-13 (though there is some R-rated language). That’s not to say that the story isn’t a bit messed up, its just to say that it is not exploitive. This is not “Quentin Tarantino’s Intruders”.

With his sister guiding his priorities via a walkie-talkie, Ben creeps about the house, slowly gaining insight into the intruders. Through overheard bits of conversation and documents Ben finds laying around, the story twists contained in Intruders become clear to the observant player far before the game actually tips its hand.

The story in Intruders feels a bit rote, but when you get on towards the end of the game and all of the characters’ skeletons start falling out of the closet, there is some satisfaction to be had. Even if you know they are coming, some of the story’s twists and turns are still a hoot.

It’s the house that Ben and his family inhabit that is truly the star of the show. Once the intruders arrive, the cleverness of the house’s design becomes apparent. With the three bad guys patrolling randomly through the three floors, the player is forced to creep about in the shadows, moving carefully from room to room and plotting routes to avoid getting caught. The tension is palpable.

The house is laid out in such a way that there are a number of different ways to reach your goal. Need to reach the study? You can cut through the basement – provided that none of the creepers is patrolling that way. Or you could try to sneak across the main living area, though the light of the fireplace might reveal your position. Or you might try to go upstairs and pass through the bedrooms – just beware the giant punch-y guy that likes to hang out up there.

Intruders: Hide and Seek puts a lot of emphasis on its hiding mechanic. Ben can duck into any number of cupboards and closets to escape the notice of the intruders if he is getting chased. But in reality, this mechanic only comes into play if you screw up on the stealth side of the gameplay and get spotted. If you put enough distance between yourself and a pursuer, you can duck into one of these cubbies and throw them off of your trail. I much preferred to carefully creep around and not get seen at all.

Intruders is a game that benefits greatly from being in VR. Ben is a child, so everything in the game is seen from a child’s perspective. Every object is proportionally larger than you would expect it to be, and the sense of scale present in VR really helps to sell the illusion. Being in VR, Ben can also peek around corners, which is invaluable in getting from Point A to Point B.

At one point I came out of a well-lit room and into a darkened hallway. I couldn’t see anything, so – not wanting to use my flashlight – I stood for a moment and waited for my eyes to adjust to the darkness. Once they did, I was able to make out the edges of the hallway and proceed. It struck me at that moment just how immersed I was in this game. It may seem a small thing, but you certainly can’t let your eyes adjust to lighting in “flat” games.

The intruders patrol the house with flashlights, and keeping an eye out for the telltale flicker of a flashlight coming around a darkened corner will often keep Ben out of harm’s way. So long as you are not spotted, you can always duck back around a corner or into a room to keep from being seen.

The game is divided into eight “chapters”, though these are not denoted in-game in any way. Basically, each chapter consists of a little mission, “get to this room and find this thing” sort of stuff. When you are actually playing the game, the only way to know that you are moving from one chapter to another is when a trophy pops up and the game auto-saves.

This auto-saving is actually my biggest grievance with Intruders: Hide and Seek. While the game is not overly difficult, you do on occasion mess up and get caught by the bad guys. This leads to a Game Over screen and automatically loads up your last save – at the beginning of the chapter. If you have been creeping around for 15 minutes since the chapter started, this can set you much further back than feels fair.

Though I sometimes have difficulty with first person perspectives in VR games, I found Intruders to be comfortable for the entire campaign (which I completed in two sittings of about 90 minutes each). The game offers a variety of comfort options for movement, but I found the default settings worked just fine for me.

Trophy hunters should take note: there is a fairly easy Platinum to be gained in Intruders. I picked up around 80% of the trophies naturally in one playthrough. The only ones I was missing involved finding collectables, so as soon as someone throws a collectables guide up online, I’ll probably swoop back through and pick those trophies up.

Intruders Is Worth A Look

Beyond the stilted performances and the rough checkpoint system, I had a pretty good time with Intruders: Hide and Seek. In a VR library chock full of similar games, Intruders’ gameplay feels fresh and original, and I enjoyed getting to know the ins and outs of Ben’s family and their creepy cool house. The game feels tense and slightly dangerous without feeling exploitive, which is a nice territory to be in.

Intruders: Hide and Seek does exactly what I want in a VR title. It creates a realistic and immersive space around the player, and then does interesting things within that space. Intruders is a rock-solid entry in the PlayStation VR’s library, and is well worth a look.

While there are a few rough edges, Intruders: Hide and Seek is well worth a look for stealth fans seeking something different. Crawling around in the shadows of your family’s ultra-lux vacation home with only your wits standing between your family and certain doom is far more engaging than I expected. Despite some wooden performances and a rough checkpoint system, Intruders is fun and amusing. A great game for a snowy afternoon.