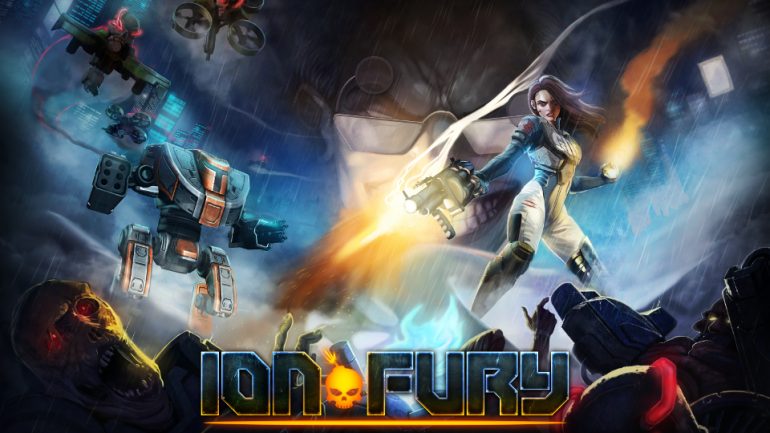 Many years have passed since a brand new title has utilized anything close to the original engine that powered Duke Nukem 3D back in 1996. In fact, the last game to use this engine, World War II GI, released in 1999. Now, in 2020, we receive a brand new hero in a brand new retro shooter, Ion Fury.

You start in the shoes of Shelly “Bombshell” Harrison, a bomb disposal expert called in by the Global Defense Force. She is hired to save Neo D.C. from cybernetic soldiers controlled by the nefarious Dr. Jadus Heskel. As expected from this type of game, the main draw is gameplay. In this, Ion Fury invests little time in narrative storytelling and instead throws you right into the fray, offering smooth, engaging gunfighting the entire time.

Another staple to games made on this engine are punchy one-liners and Ion Fury has these in spades. Most of the catchphrases are zingers, but not all of them are winners. Either way, it’s still fun as hell to hear this gun-toting badass mock her enemies.

Weapon selection plays a key role in shooters, and Ion Fury has a nice variety, ranging from traditional shotguns and handguns to automatic weapons and explosives. In fact, the game does a great job of making all weapons important in some form or another. The automatic weapon engulfs enemies in flames, providing extra passive damage, and the handgun has an auto-lock feature that makes quick run-and-gun moments feel awesome. Of course, the auto-lock is balanced out by weaker bullets; so knowing when and how to use your weapons plays a key role in the game.

The gore itself is delightful and presented (without going Kill Bill crazy) in wonderful pixelated detail. At one point, after decimating a handful of enemies near a locked door, I happened to pick up one of their heads on accident and throw it across the room. This, of course, unlocked a Trophy. Delightful.

Despite the positives the game has going for it, its different levels of repetition span multiple facets of the game. Level design stands out well, but what you do in those levels does not. Sure, there’s a ton of gunning down baddies, but there’s also a ton of finding key cards to unlock doors. Enemies also have only a handful of different looks, often showcasing the same two types a vast majority of the time.

Sound quality itself has a thoughtful retro style to it that extends between sound effects, music, and voice work. Of all of these, the voice work is the only one that left me with anything negative to say. While the voice work is quite good in its own way, especially for Bombshell, it soon becomes incredibly repetitive, particularly when it comes to enemies. They constantly repeat the same two phrases; with this kind of repetition, simple grunts or shouts would have probably worked more effectively.

Stuttering performance is another knock on the game. I often had to explore zones after defeating everyone in order to find my objective, and I consistently had the same frame rate drops in the same spots. They never debilitated gameplay, but pixelated games like this enunciate frame drops way more than I had expected.

The last negative occurs when the game autosaves. The game comes to a full stop when this happens. Thankfully, most of these moments are lulls in gameplay anyway, like after picking up an objective keycard or walking through a specific doorway. At any rate, the save function has a look and feel that cannot be ignored.

Ion Fury takes retro shooting to the next level by digging deep into the medium and running on the engine that started it all. It’s not without its missteps, but a brand new badass main character coupled with wonderful weapon selection and fun gameplay makes for a solid title worthy of the games that inspired it.

Ion Fury is available on PlayStation 4 and PC.

Ion Fury takes inspiration from the great retro shooters of the industry and runs with it. High-octane gunfights mixed with retro style and one-liners is a formula that never gets old. Ion Fury is a retro fix all its own, and it does it so well. Despite its setbacks, it's a blast to play and worthy of Build engine that it utilizes.