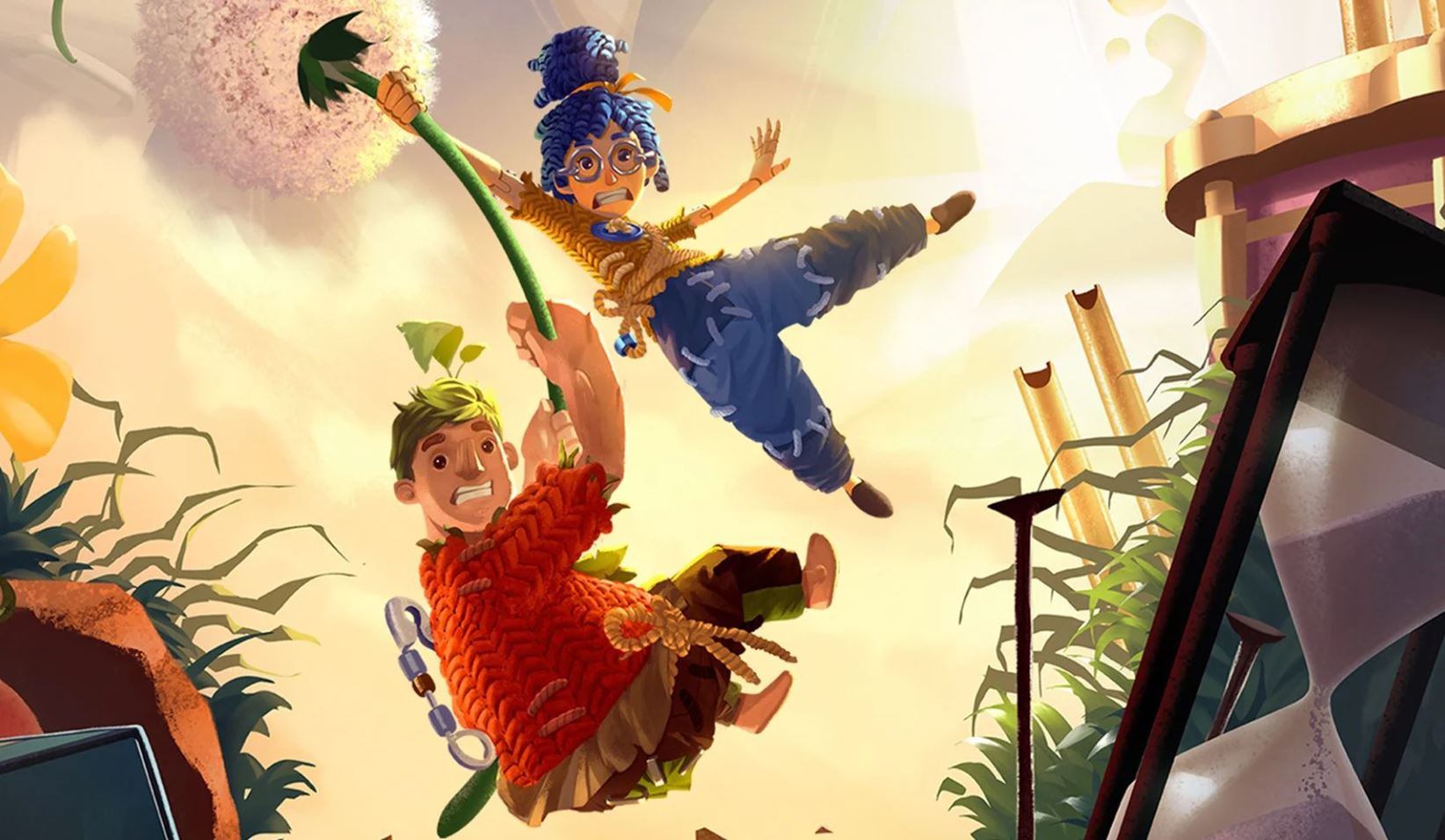 It Takes Two PS5 Review – Making a co-op game enjoyable isn’t the greatest challenge in the world. After all, there were people that gleaned a globule of entertainment out of Aliens: Colonial Marines because of the co-op, even though the game itself was still very, very bad. What is challenging is to make a co-op game that actually draws you into its world by throwing a succession of smart and fun things to do, with obstacles that simply cannot be overcome without full cooperation.

Oh, and it should have the option to mess with your co-op partner because how else are you gonna resolve arguments? Hazelight Studios‘ new game It Takes Two is that kind of co-op experience. A consistently inventive puzzle platformer that blends its narrative into the very fabric of its mechanics.

A Story Not Quite Matching Its Gameplay

The story of It Takes Two is a blend of Pixar’s family-friendly sentiment and the surprisingly sweary family films of the 1980s from the likes of Amblin. It sees a couple, Cody and May, on the brink of divorce when their daughter Rose, in a wish for everyone to be ‘friends again’, somehow transports them into a pair of dolls. Desperate to be returned to normal, the couple embark on a bizarre and fantastical journey from toolshed to backyard and beyond, learning to ‘collaborate’ and reconnect along the way.

They’re ‘assisted’ at every turn by a mischievous self-help book that pushes them out of the way of apparent success on multiple occasions in the name of fixing their relationship.

While it does create an interesting lightning rod for the couple to bicker amusingly, the main story thread is arguably the only part of the game that doesn’t deliver consistently. At its worst, it’s transparently manipulatively mawkish in its attempt to make you feel, but for the most part, it manages to retain a decent level of charm, wit, and sentimentality. 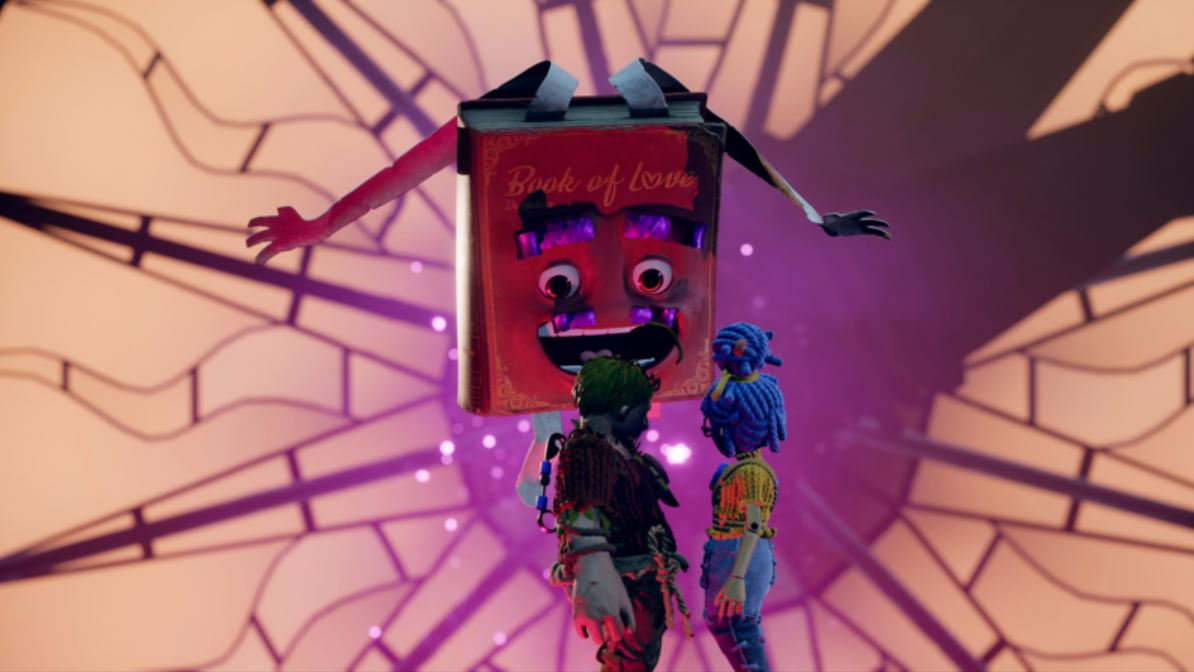 On the surface, it’s not It Takes Two’s strength, but in a subtler way, the manner in which the story intertwines with how the game plays and the choices it makes within that truly is a highlight.

Rather than be an either/or kind of co-op story experience where you can go it alone with an A.I. partner, Hazelight outright demands you team up with another person, whether that be sitting together on the same couch or online and the game is 100% designed with human error and understanding in mind. I’d say it’s all the better for it, as there are no compromises for a solo structure, meaning every single puzzle is made so you absolutely must work together.

Key to making this work are two rules. Rule one is that Cody and May must have their own, separate gadgets, abilities, and jobs throughout that work in tandem with each other. The second is that there has to be minimal repeat use of tools and mechanics. In each section, the pair are introduced to a new conundrum, given a new set of tools to tackle the problem, and then move on, rinse and repeat with a new conundrum and toolset.

In one section, Cody and May must take on a wasp army to help squirrels reclaim their tree. The squirrels arm Cody with a sap-firing gun that weighs down objects to grant easier access to higher spots within the tree, while May gets a match gun that fires lit matches. Her gun on its own can knock certain trigger boards to open gates and the like, but the magic comes in what these two weapons combined can do.

Cody can fire sap at gates made out of thin sticks, and have May fire matches at the sap to ignite it, thus opening the way. The two work in conjunction throughout this section of the game in a number of ways, culminating in a boss fight that continues this to its natural conclusion. Then you’re off to do something else and those guns are done with. 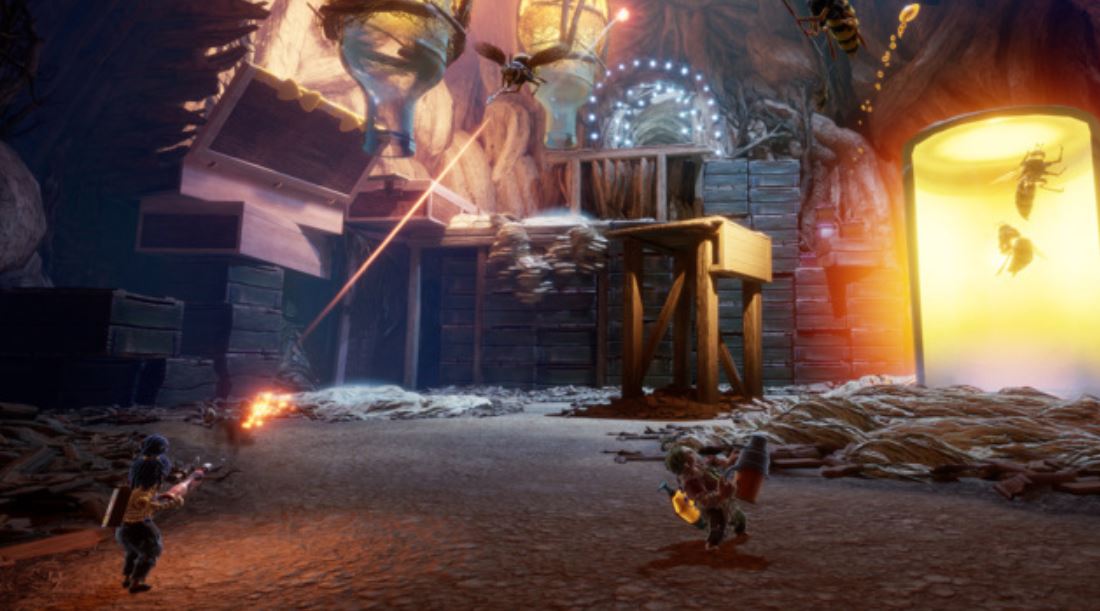 The best thing about this is almost nothing major that gets introduced outlasts its welcome, and none of it is ever too complex that I felt they barely got warmed up before moving on. Portal 2 really is a fair and worthy comparison for this because it’s the only other game with co-op that gets that balance as close to spot on like this.

With the tools you get changing constantly, so too do the challenges. One minute you’re calling out farmyard animals so your partner can press the corresponding button to open up a path for you as you grind rails, the next you’re doing dot-to-dot drawings, then each steering one side of a pirate ship in a battle against angry toys. The jump from even to even is largely seamless, with the story providing natural progression from one area to the next.

What starts out as a cartoonish spin on Honey I Shrunk the Kids begins to evolve into something more fantastical and varied.

The early game eases you in with relatable arenas set in a toolshed, then the outside of a tree. From the second you head into that tree, the changes come thick and fast.

Arguably the high point of the game takes place inside Rose’s room, where the familiar surroundings of Cody and May’s daughter’s room become an increasingly absurd playground of imagination with a wonderful flow of shifting playstyles and environments. It’s almost as if things get more unreal here because Rose’s imagination has a stronger pull in what is effectively her own little world. 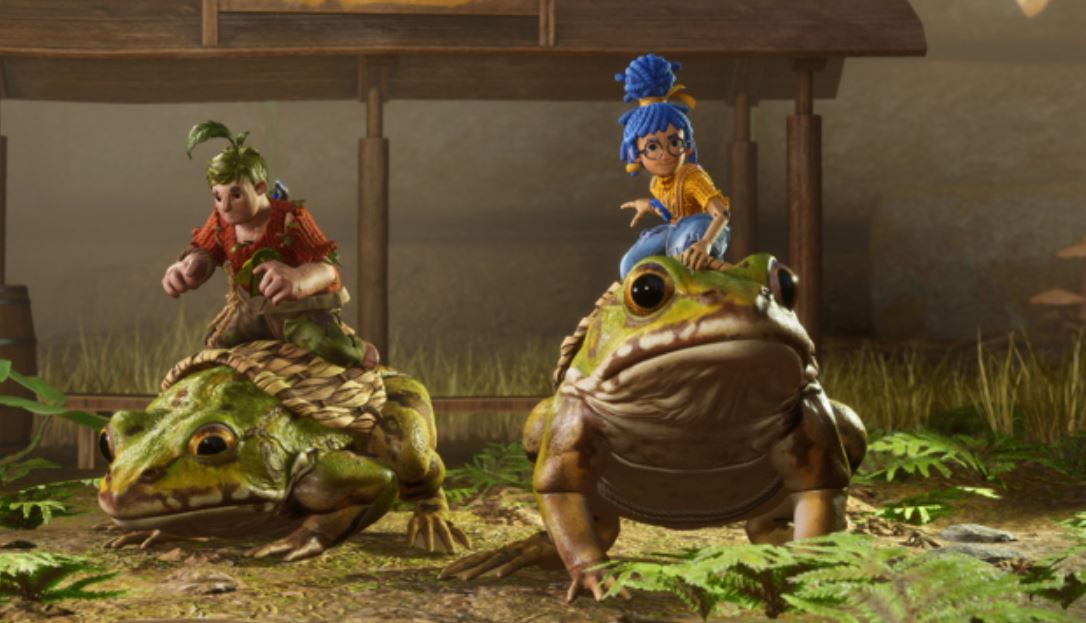 While progress is the focus, there’s still room for exploration. It can sometimes be easy to miss if you get the puzzle solutions down quick, but digging around finds you minigames (ranging from tug-of-war to target shooting), and fun little side games to play. Interestingly, the trophy list tends to lean less on ticking off missions, and more on rewarding experimentation with the things you find in the game. It’s not a huge deal, but it’s a nice change from ‘collect 50 of this’ and ‘beat mission 4′.

So the game itself is fantastic, leveraging the power of true co-operative play to great effect. What about the technical side? Well, on PS5 it runs smoothly and looks vibrant and detailed as you’d expect. Jumping back to a more stylized look after Hazelight’s previous game – A Way Out – went for a more realistic one, was a good choice, allowing the game to express its imaginative world more clearly.

There are the occasional instances of character models going through objects partially, and while that generally isn’t a problem, it did cause me to have to restart on several occasions when object and character become locked in eternal battle.

The other, perhaps more pressing, gripe I had with It Takes Two’s technical side was the lack of PS5 features. Haptic feedback is barely present and the help features are incredibly streamlined. To be fair, the help menu is less of a bother in a game that clearly prides itself in doing things its own way and damn anyone trying to ask for help. The lack of DualSense features is a bummer though because I think this could have been a marvellous showcase for it. 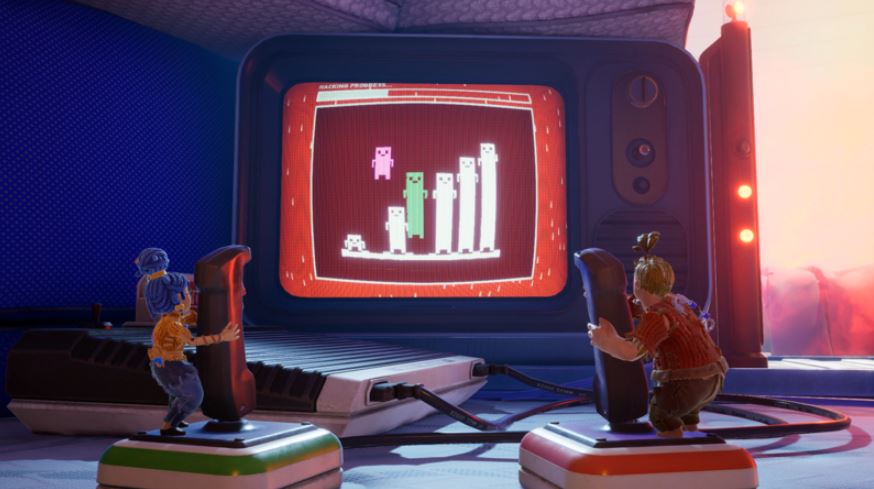 A Joy Through And Through

It Takes Two shows that Hazelight has learned well from its previous titles, evolving every bright idea and refining the ones that didn’t quite pan out to create this marvellous co-op experience that deserves to mentioned in the same breath as some of the greats. Sure, the good stuff does a bit of heavy lifting to accommodate the inconsistent overall story, but there’s so, so much of that good stuff to go around.

It Takes Two is available now on PS5 and PS4.

Hazelight further hones its craft as ambitious creators of unique co-op experiences with It Takes Two. A clever, inventive procession of ideas and concepts that gel together to form a spellbinding co-op game.