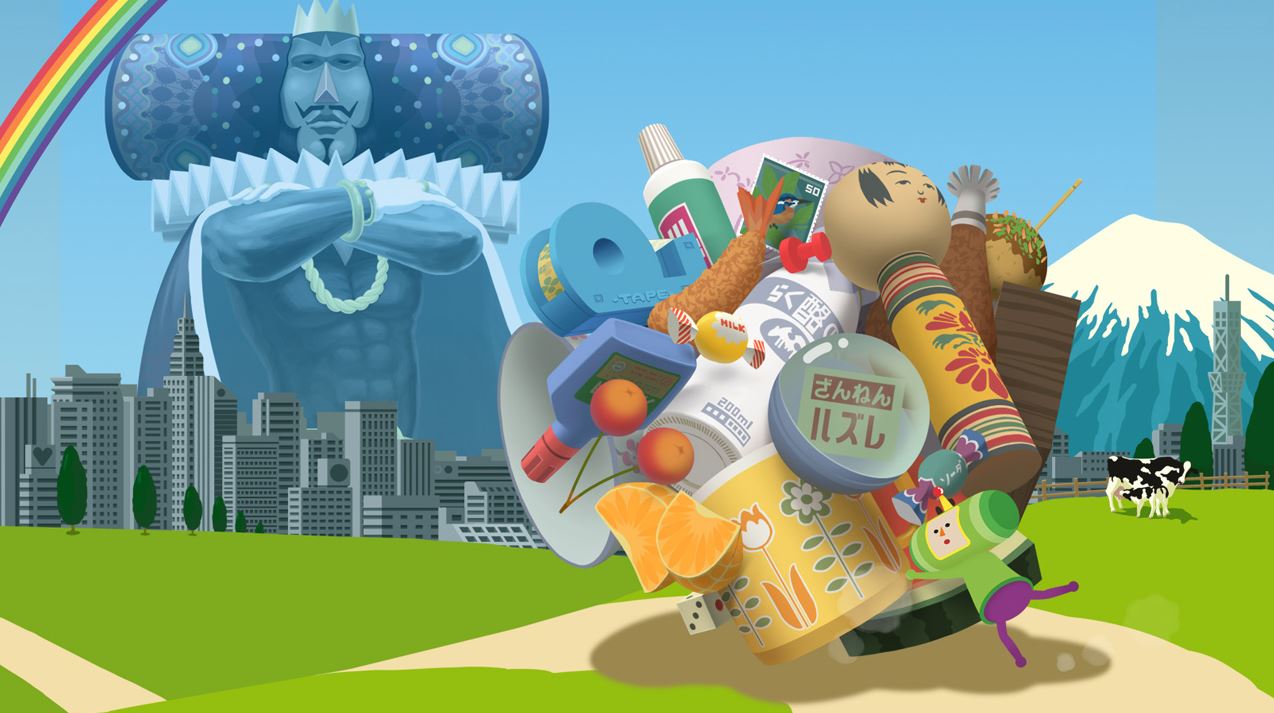 Katamari Damacy Reroll PS4 Review – Bandai Namco‘s Katamari Damacy Reroll is the purest spiritual form of the PS2-era of gaming. It’s inventive, it holds up spectacularly well, and it stands out as this insanely goofy one-of-a-kind thing that epitomized many of the cult hits of that generation. It’s a game that I fell hard for back when it initially released in 2004, and its reappearance on PS4 is just the latest reminder of why this game is an all-time classic.

It all begins with the infectious hum of the game’s title theme, which leads into the vibrant, eccentric opening titles. It’s such a simple song, but it sinks so, so deep into your ears that you’ll need more than cotton buds to remove it. Backed by a wider soundtrack of poppy Japanese songs, and jazzy lounge music, it’s a jolly, catchy tune that sets up the tone of Katamari perfectly.

The premise of Katamari Damacy is simple but layered in something wild. You are the teeny-tiny Prince who has been ordered by his arrogant father (The King of All Cosmos) to roll up objects with a special sticky ball until they are a sufficient size to be turned into constellations in the sky.

The rules are simple. You have a varied time limit to grow your ball (Katamari) to the size the King requires, and you can only pick up objects smaller in mass than your Katamari. Naturally the more you pick up, the bigger the Katamari gets, and the bigger the objects you can pick up.

So while you’ll start by rolling up thumbtacks and erasers, it soon escalates to picking up entire human beings, and eventually, whole buildings. The exquisite madness of Katamari is seeing its stylized world first by looking up from the floor of a dining room to rolling over an entire island as a gargantuan ball of stuff.

It’s not exactly a realistic depiction of the real world that you’ll be hoovering up; instead, it’s an absurd, stylized version of reality, where things can show up in all sorts of sizes, where schoolboys and squid hang around the same places as stilt walkers and sumo wrestlers. It’s a massive part of the game’s appeal, and the noises living things make as they are rolled up are deliciously comical.

The Katamari is controlled using both analogue sticks to roll it around the level. Its mechanics owe a small debt to Super Monkey Ball or going further back, Kula World. You need to take gravity and physics into account (as much as you can in a game about rolling up streets and houses to earn the praise of a godlike father) as you navigate around the object-strewn course.

Go down a steep incline and you lose control, leaving yourself open to clattering into something bigger than you. If the Katamari gets stuck or collides with certain bigger objects, people, or animals it can send items on the Katamari flying, thus reducing its size. As fun as it is to roll up ludicrous amounts of everyday items, it’s not all there is to it. There’s a level of strategy involved in not only passing the grade the King of All Cosmos sets, but going beyond and trying to create bigger and bigger Katamari constellations.

Each stage is filled with little dioramas of silliness and the odd present from the Prince’s Poppa. There’s a soothing rhythm to be found in rolling up everything around you, but it warrants a mention that the little discoveries really add something to what could be a very brief experience. There’s trophies and stat boards for collecting every kind of item in the game too, so exploration of these stages is actively encouraged.

Themed levels help to add a bit of variety. These are based on real constellations and either ask you to pick up as many of a certain thing as possible within a time limit (such as fish for the Pisces level) or find the biggest version of something you can and roll it up whilst avoiding any other version of it (such as bears for the Ursa Major level). On top of that, there’s a two-player mode that can get quite competitive as you both strive to make the biggest Katamari.

Little has changed with the game since its PS2 version, but some quality of life improvements have been added, including much quicker load times, even more so than the Switch version that debuted last year. It does still have some of the original’s issues however. Made before camera control in third-person was truly smoothed out, there’s times Katamari can feel somewhat fiddly or cumbersome due to the stubborn camera controls.

There’s also a bug that can occur when you’re warped to safety after getting stuck by accidentally falling through the level. It essentially sees you fall through the floor almost endlessly, and that obviously makes it hard to finish levels properly if it occurs before you reach a target. It’s not a common thing, and it does go away if you return to a level, but it’s a bug I’ve noticed in more than one version of the game before, so be aware.

The Magic Of A Classic

So, as you may have surmised, there’s not much out there quite like Katamari Damacy. Even now when it’s clearly inspired games such as Donut County, it stands out as a beautifully unique series.

It’s a shame that it got dropped right at the peak of new console launches, alongside a host of big games, because the magic of Katamari is still very strong, and it deserves the chance to be appreciated by an even wider audience. If you want 7-10 hours of joy, admittedly with the odd dose of palatable frustration, then this is the best medicine around.

Even after 16 years, there’s nothing quite as absurdly wonderful as Katamari Damacy, and this remastered Reroll edition brings it to a whole new audience. Chock full of fun and silliness, blessed with a hypnotically soothing gameplay loop, and a soundtrack so joyously daffy it leaves you beaming ear-to-ear, Katamari Damacy deserves a successful PS4 Reroll.