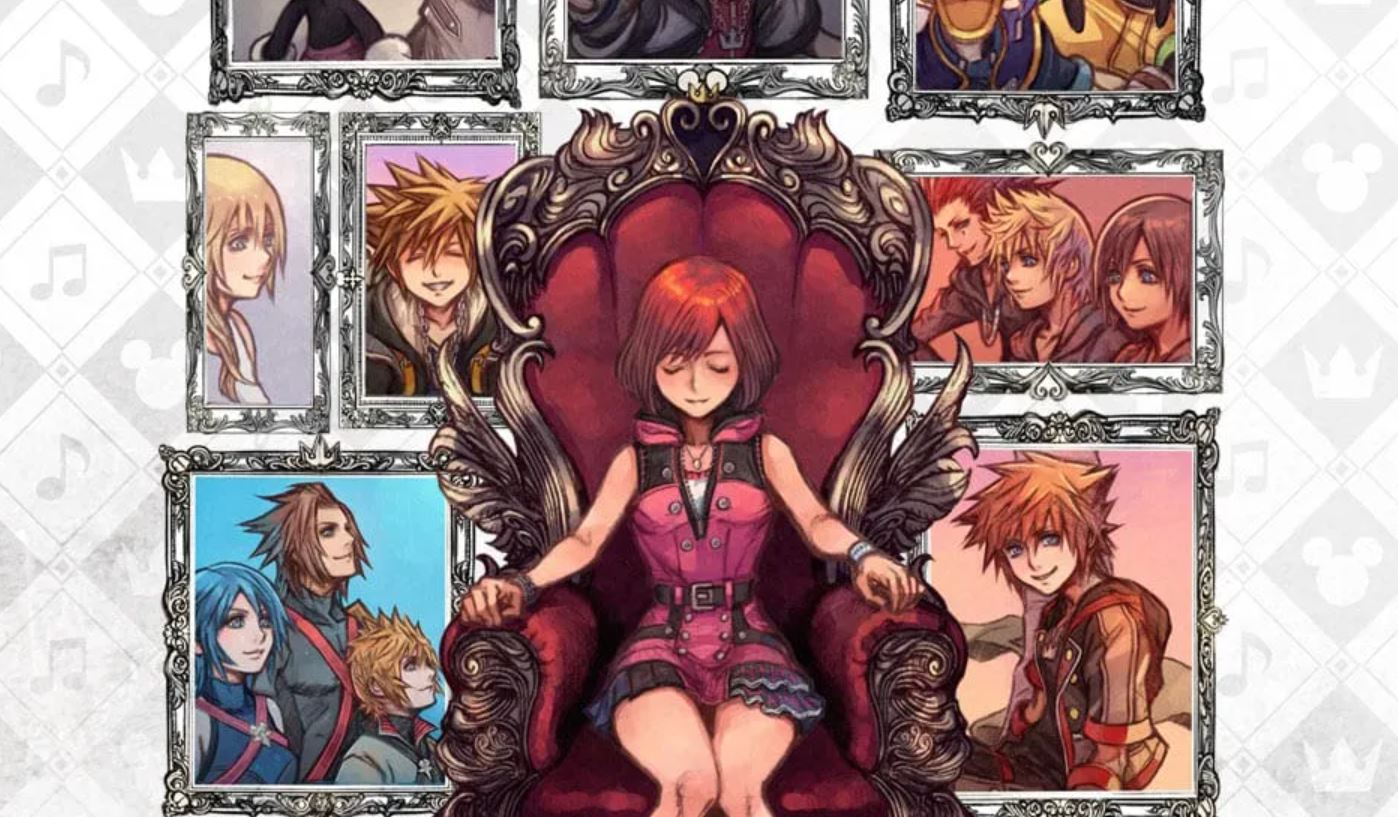 As an obsessive Kingdom Hearts fan, I struggled with the idea of a rhythm combat game being the newest entry in the franchise. It’s no secret that the music in Kingdom Hearts is so beloved. So a game with that as a core component should be an instant win, even with the shift from its in-depth story and classic action RPG mechanics.

Somehow Indies Zero and Square Enix implemented a deep RPG system into Kingdom Hearts Melody of Memory. Players can equip different items to help them survive the song, add equipment to enhance the experience, or add legendary party members. While the game impressed me with its ability to meld RPG mechanics into a combat rhythm game, I was left a bit torn on the story. Let’s get into it.

The main goal is to hit all the enemies and objects in your path with various attacks and skills. You start with the classic trio of Sora, Donald, and Goofy. However, as you progress, you will unlock other iconic trios from the other games. All the characters play the same way; if you miss an enemy, they will attack and damage, which also restarts your combo. To attack, you can use one of three buttons, L1, R1, X. Each one can attack a single enemy.

However, there may be two or three enemies that need to be hit simultaneously. This is where you will need to hit a combination of two or all three buttons. Along with this, you will have to jump to dodge potential attacks (O), jump to attack air-born enemies (O+ X, L1, or R1), jump and fly to collect stringed music notes (O and hold), and finally, use magic on enemies by hitting Triangle at the correct time. Learning the timing is where things can get tricky.

Timing Is What You Need

Along with your standard music track to play on, there are also two additional tracks. These are special tracks that have you flying while a music video, for lack of a better description, plays in the background. These songs are the more iconic songs like Simple and Clean from the original Kingdom Hearts opening. And, whilst playing the original video will be in the background.

The other track types are effectively boss battles. These tracks have your character in the background fighting the boss, almost like you’re watching someone else play these iconic moments, with the music notes coming in from left to right. The player will have to hit the note at the correct time. The more notes you miss, the more damage your character will take during the battle.

In most rhythm games I’ve experienced, if you know the song and the beat, you will have an infinitely easier time with whatever song it is. Kingdom Hearts Melody of Memory doesn’t take that approach. In other games, you’re making the song happen, and if you miss a note, the song hiccups to react to you. In Melody of Memory, the song happens around you. The hits your landing arent causing the beat but adding to it. It isn’t easy to get used to.

I found myself multiple times, wanting to attack at the beat of the song. However, that’s not how the game wants to be played. You’re not hitting the beat. You are rather hitting the enemies in sync to the beat. It took me a long time to get used to it. I had to train myself to stop using the song as a roadmap and use it more as a blueprint. Looking at the cluster of enemies coming my way and layering onto the song, rather than trusting the beat to tell me when to attack.

At first, the frustration of learning how and when to attack was difficult. But, after a few rounds, I became acclimated to the system. On occasion, I would still miss a beat and subsequentially the next few beats because of the timing but the game’s charm and style started to win me over.

Because the game is slightly easier than a classic Kingdom Hearts game, Indies Zero added additional objectives to progress from level to level. As you complete the song, there will be three additional challenges, rewarding one star per objective. These stars will continue to be collected thought the game to unlock gates which initially block you from moving on.

For instance, you may need 28 stars to move on to the next cluster of levels. To achieve this, you will need to go back through songs you can access and complete the added objectives in order to collect the required amount of stars. These aren’t the only items to collect. True to its RPG roots, as you get high scores and complete the added objectives, you will have higher drop rates for items and collectibles. For instance, you might get a potion or music sheet for getting all three stars on a song.

Potions are what you would expect; items that help you heal if your health gets too low. Before jumping into a song, you have an option to equip up to five static items, as long as you have some in your inventory. Potions and high-potions function primarily the same. If your health dips too low, the item will be automatically used as your playing. Other items will increase experience or even bring King Mickey in as a bonus fourth player.

Additional items function differently; some you can combine, while others you buy from the Moogle Shop. Again in classic RPG fashion, Kingdom Hearts Melody of Memory allows you to combine materials to make potions or summoning items. In contrast, others are used to unlock additional tracks in free play that aren’t included in the story mode. All of the collectibles alone are enough to keep replaying levels.

Different Modes To Relive Everything

Although you have to play the main campaign to experience the story, you also have to play it to unlock the free play mode songs. Kingdom Hearts Melody of Memory has four playable modes; Story, Freeplay, Co-op, and Vs. Each of these modes is fairly straight forward.

Freeplay is the most customizable mode in Kingdom Hearts Melody of Memory. Like in story mode, you have the option to play the songs on Beginner, Standard, or Proud difficulties. However, Freeplay also allows you to select styles of play. These include the standard play, as I described above. Also included is performer mode, which adds new prompts for you to hit with the square button. This adds not only a layer of difficulty but also aligns more with the beat of the song. Finally, we have one button. This makes everything much easier by allowing players to enjoy the song or even practice harder modes casually.

As for Vs. and Co-op modes, both can be played locally or online with one friend. In Vs. mode, you and a friend compete to the same song, trying to best each other’s high score. However, in Co-op, you and a friend are trying to complete the song with the highest score. Each player has an individual score that keeps a bit of competition. Nevertheless, both scores get added together at the end of the song. While these modes are fun, unless you progress through the story to unlock new songs, they will be a bit empty.

Melody of Memory doesn’t have an overarching story. There’s no setup or even an original story to follow. Instead, you are thrown into the beginning of the first Kingdom Hearts game. As you progress from song to song, moving through most Kingdom Hearts franchise levels, you are met with periodic cutscenes for the specific game you’re in. These cutscenes are narrated by Kairi, the series main female protagonist.

It’s not until you reach the end of Kingdom Hearts III‘s story that we finally get new info and cutscenes in Melody of Memory. This is something I wasn’t expecting. Even entries in the franchise like Re: Coded (Kingdom Hearts 2.5) and Union x (Mobile) have fairly large revelations to the series as a whole, even if most of those games are filler. Kingdom Hearts Melody of Memory is different in this way: while everything you experience in the game is rehashed material, it’s presented in an easy-to-digest straightforward way until the last few cutscenes.

We, without question, get a tease as to what was coming next. We just have to play through hours of levels and recaps from a story we already knew. This would have been fine if we were given context in the beginning as to what was happening. Why were we releasing all of these memories? Why was it narrated by Kairi? How did Kairi know what happened in games she wasn’t a part of? Some of these questions are answered at the end of the game, but most are not.

A Nostalgia Trip With An Unclear Audience

It’s hard to understand who Kingdom Hearts Melody of Memory is for. While it is an amazing jumping-on point for new players or fans who might have skipped all but the number titles and are confused about what is happening in the series, the game is also a fanfare to existing Kingdom Hearts fans.

The music of Kingdom Hearts is as well recognized as the music from a classic Disney movie. So, a game created around it feels like a game designed to get the most hardcore players to play it. Unfortunately, if you are a hardcore fan of Kingdom Hearts going into Melody of Memory expecting a brand new story that gives us some answers, you’ll be left disappointed, even if it does hint at what will come next.

Kingdom Hearts fans have learned not to neglect any game, no matter how small it may be. Because of this, the majority of Kingdom Hearts fans will be interested in Melody of Memory, even if they don’t like rhythm games. Regardless, the game is most definitely a nostalgia trip that I mostly enjoyed. Where the game leaves off has me very excited for what’s to come. If you want to check out our a thorough Kingdom Hearts timeline analysis check out our feature here.

While it is unclear who Kingdom Hearts Melody of Memory is truly made for, the hardcore player or the newcomer, the game is undeniably charming. Playing through some of my favourite songs of any video game franchise won't get old any time soon. Meanwhile trying to three-star each level and collect everything to fill up the museum gives players even more reason to replay each song. While Kingdom Hearts Melody of Memory missteps in its delivery, the game's presentation and quality shine enough to overlook some of its shortcomings. I cant wait to see what's next.