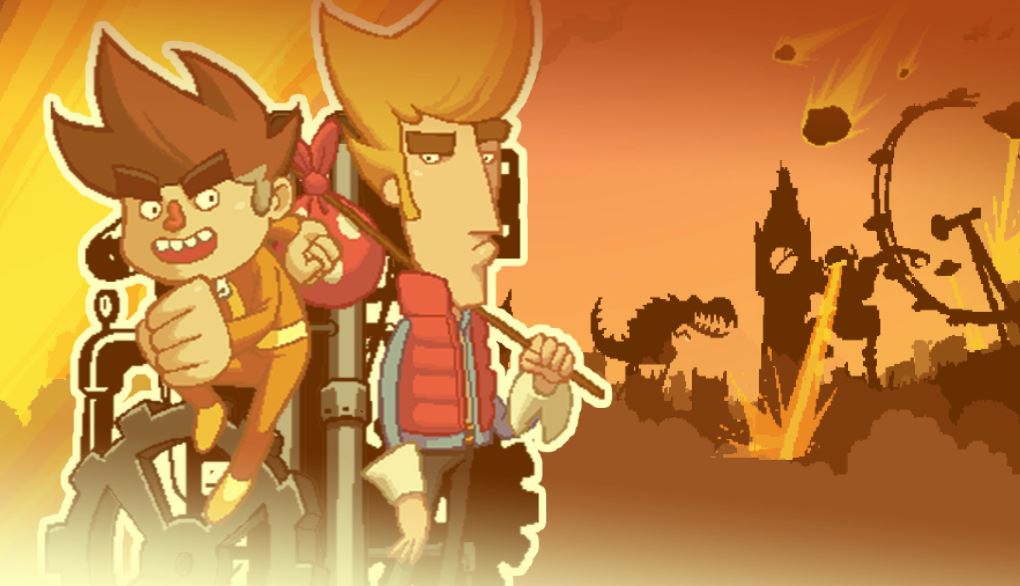 Lair of The Clockwork God PS4 Review – Lair Of The Clockwork God is just about one of the most unique games I have ever played and the kind of experience that while short will stick with me for some time. This is mainly due to the fact that it’s actually really hilarious, the gameplay is simple but fun, and it altogether is such a focused experience while introducing new mechanics almost every level.

It also constantly subverts your expectations wherever it can and at the end of all the puzzles and platforming, you have an extremely honest ending that rather than introducing some kind of deus ex machina simply follows the logical conclusion of what your actions have caused.

Two For The Price Of One!

Lair of The Clockwork God is one game split up into two main styles of gameplay. Point-and-click adventure games, and platformers. Throughout the story, you play as both Dan and Ben, two friends who begin their journey looking for a magical flower that could potentially cure cancer in order to save their friend, Matt C.

The journey quickly turns into a fight to save not just Matt C., but the world itself as they discover this underground lair housing a super-computer that claims to be the one responsible for keeping the world safe for thousands of years. I don’t really want to dive too much into the details about the story, as I feel it’s something that players should experience for themselves.

But what I will say is that it is an emotional tale through which you build a genuine connection to Dan and Ben. The game will have you crying one minute then laughing at an erection joke the next. Definitely the height of comedy and class.

There’s also plenty of fourth-wall-breaking that happens throughout the game, where jokes and comments are clearly aimed towards the player and meant to remind you of how self-aware and meta the game is; but, thankfully it’s always still funny and clever, especially when the game uses some of these instances as solutions to puzzles in the game.

Together We’ll Muddle Through

That is in fact where Lair of The Clockwork God shines brightest. The puzzles are extremely entertaining and fun to solve and in the end, I found myself enjoying them far more than the platforming elements which was a surprise since I usually lean more towards platformers than puzzle games.

I did get stumped on a couple of the puzzles along the way, but as is usually the case with puzzle games, throwing anything at the wall until something sticks was the method that allowed me to get through. This wasn’t even really frustrating the way I’ve known it to be with previous puzzle games, since the animations and lines of dialogue that go along with trying to use different items or abilities were always clever.

The other major reason for that not being frustrating was because of how well Lair of The Clockwork God utilizes every aspect of the game. Even if what you think the solution might be is a completely stupid idea, you might as well try it because half the time the solutions came from thinking about what might be the simplest and even funniest answer to the problem.

One of my absolute favourites came right at the beginning of the game, where the easiest solution for how to get across a pit of spikes was to just push someone in front of you onto them, then walk across their corpse to the other side. A fitting solution, especially if you exhausted the dialogue options with that particular NPC.

The straight platforming sections are still fun, just not nearly as creative as the puzzles. There is the added element of some levels changing the gravity, which they do go the extra mile with and make it not just a straight down-up change but also left-right. It added another layer of challenge, but it didn’t feel like this particular mechanic was pushed to the limits of its potential. This isn’t a complaint really, since the mainly straightforward platforming helped keep those sections more focused and fun, I just feel like there was more that could have been done.

Otherwise, the platforming is mainly used as a mechanic to help you solve puzzles, since Ben (the point-and-clicker) is stuck to the ground and won’t bend his knees into a jump for anyone. This is even more true towards the end of the game where you unlock a teleport ability, which removes having to figure out how to transport Ben to an area that Dan can easily jump to.

The mix of the puzzles and the platforming all together work to make it ultimately a very fun experience, and the witty dialogue along the way makes for a really fun time.

Hey, I Get That Reference!

Lair of The Clockwork God doesn’t really fall short in many aspects, in fact, it’s such a focused experience that it doesn’t give for a lot of room for areas to fall short in. What I do find a gripe with is one of its biggest assets, the humour. It is a very funny game, but all the jokes are funny to me as someone who is steeped in games culture and has been playing video games my whole life.

If you were to show this to anyone who might even be a casual gamer, many of the jokes would fall flat and not at all read the way they ought to. The case would, of course, be even worse for someone who isn’t into games at all playing this as an introduction to the medium. I think it’s unfortunate that so many of the best lines are only understandable if you get the reference, especially because the gameplay is actually the kind of thing that I would recommend to a novice gamer.

The only other thing I would say works slightly against Lair of The Clockwork God is its length. Even though I got quite stuck on a couple of the puzzles it still felt a little too short, and by the end, I was really hoping for a little more especially in the final chapter that felt like a quick and easy end rather than the complex final puzzle I was expecting.

A Well Executed And Enjoyable Adventure

The fact that the humour is really only aimed at a specific audience or the length of the game not being what I wanted by the end doesn’t really matter though, because everything else about Lair of The Clockwork God is executed so well. The writing, gameplay, and level design is continuously fun and creative enough that it keeps you on your toes and actually works to be unpredictable with how it is subverting your expectations as to where the story will go next.

Lair Of The Clockwork God is currently available on PS4 and PS5.

Lair Of The Clockwork God is an excellent game that will take you on a hilarious journey solving puzzles with Dan and Ben, even if the journey is shorter than I would like and the jokes don't really read to anyone who isn't quite steeped within games culture.

Lair Of The Clockwork God