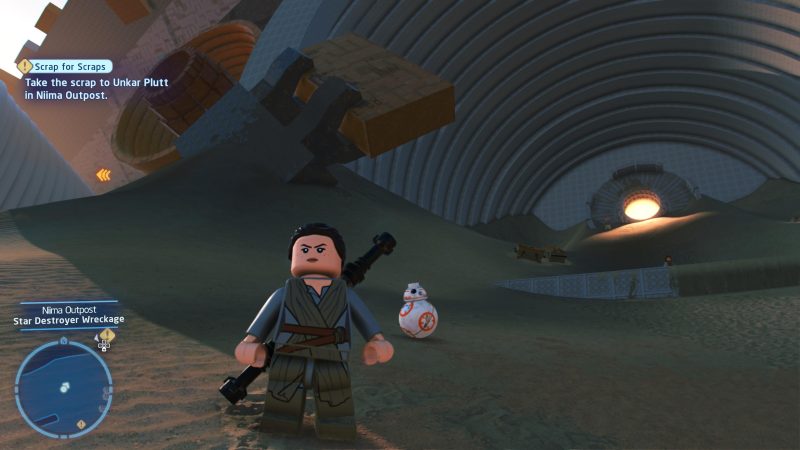 LEGO Star Wars: The Skywalker Saga Review (PS5) – We’re long past the time of needing to remind people that video games are not just for kids, but sometimes a game comes around that reminds you, they’re really great for kids.

LEGO Star Wars: The Skywalker Saga is one of those games, that’s able to capture many fun and funny moments exploring the galaxy across all nine films.

However there’s more than a few problems that hamper the fun, some of which get even worse when trying to play co-op.

There are so many changes to the way LEGO games have previously operated that are great, awesome quality-of-life features. Much of that make this the best LEGO game to date.

But along with the co-op issues, and other technical problems, the Skywalker Saga’s pacing betrays it more than it helps it. 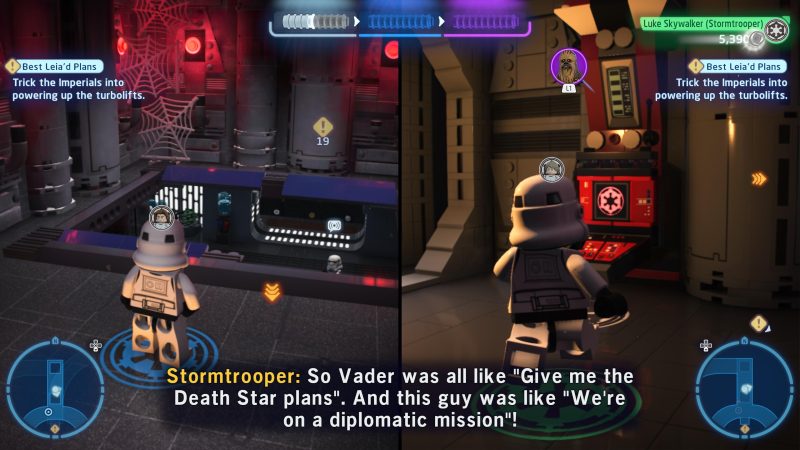 There is an abundance of things to do and collect in this game than any LEGO title I’ve played before it. 380 characters. 1166 Kyber Bricks. Hundreds of secrets, side missions, ships to unlock, and easter eggs to discover.

You can very easily spend an hour doing relatively nothing other than smashing everything in sight and likely still clear a puzzle or two in the area.

I’ve always loved the LEGO games for being a place to go where I can do whatever I want, even for just 10 minutes, and still have fun. I’m happy to report that is still the case with Skywalker Saga.

Although, if you’re looking to be as productive as possible each minute of play, there’s always, and I mean always, something to go collect.

For anyone similar to me in that they love marking things off a checklist, the Skywalker Saga has hours of gameplay for you. 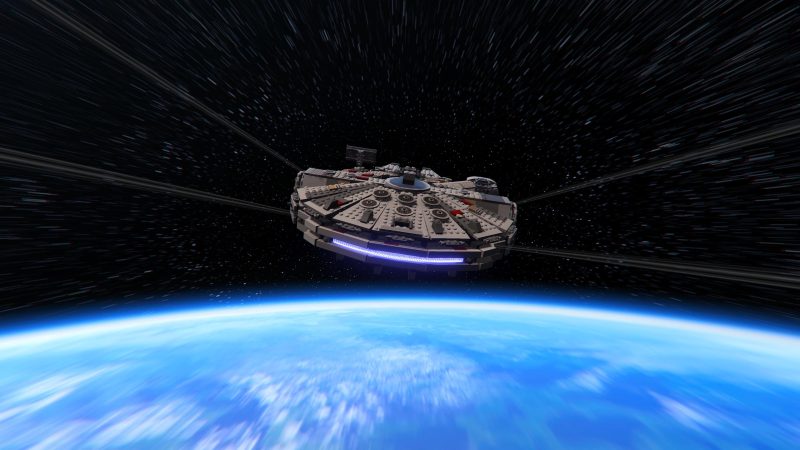 It’s a similar feeling to a game like Super Mario Odyssey, in which it felt like there was a Power Moon around each corner. There’s always something cool around every turn in Skywalker Saga, and it’s most likely funny too.

Going through the story missions and cleaning out collectibles specific to those missions is all fine and well, but the real fun of course comes in the Galaxy Free Play mode, in which you can go anywhere, be anyone, and do anything.

That level of freedom and almost overwhelming amount of things to do is what makes the Skywalker Saga the best LEGO game I’ve ever played.

It also helps that this is far and away the best looking LEGO game to date. Not only are there more details filled in with LEGO where possible, the environmental design is at a scale higher than it’s ever been for TT Games. 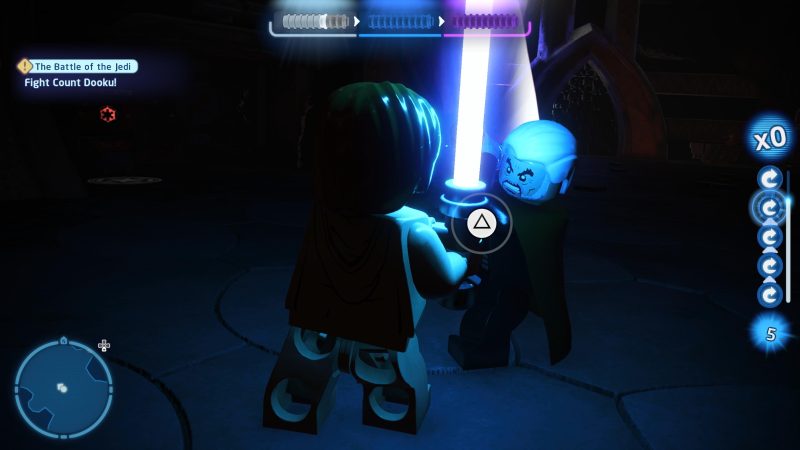 In terms of quality of life changes that make this not just the best LEGO Star Wars game, but the best LEGO game, combat and the new variety of character uses is at the top the list as the best change.

The whole combat system has been revamped in a way, though it doesn’t really differ from the past in being able to just non-stop punch your way out of things.

You can execute combos and use your character abilities to make combat varied, which helps to keep it from getting stale over the course of your whole run through of the series.

Lightsaber combat and ranged combat have both been much improved, but they’re not the most impressive areas of improvement.

What’s the most creative and impressive is how much more droids can do, not just outside of combat, but getting their own metal hands dirty. 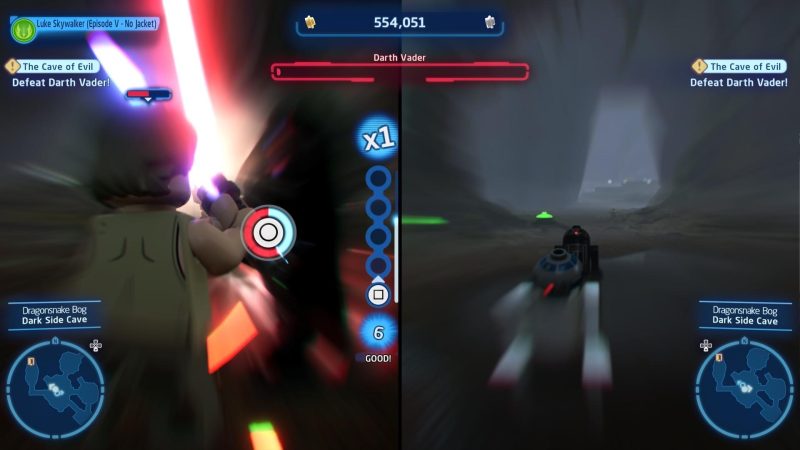 It’ll always be funny watching R2-D2 spin himself around as an uppercut to fling a stormtrooper in the air, and then continue to wail on him.

Like previous LEGO games, Skywalker Saga also has the ability to mold into feeling like multiple kinds of games at once, but Skywalker Saga is definitely the best at it.

It’s especially noticeable in aerial combat, which made me genuinely wonder if we need a Star Wars Squadrons style LEGO game.

The Force Is Not Strong Within Player 2 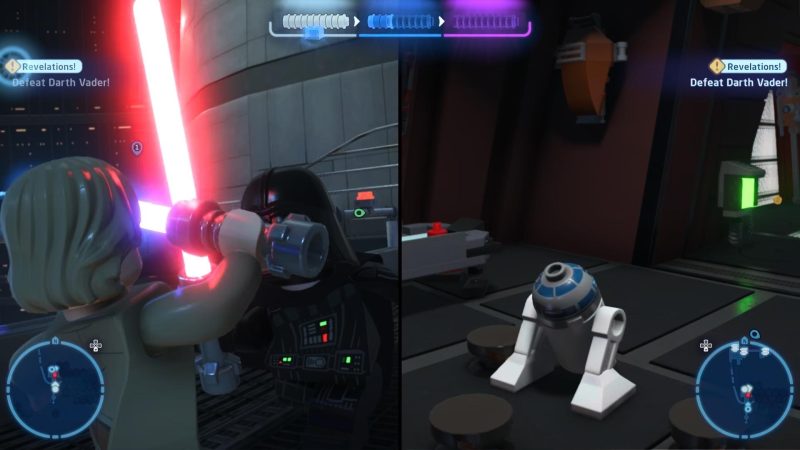 Unfortunately, much of all the good things I talked about, especially in the last section only apply when you’re playing on your own. But LEGO games have always been something I’d play with a sibling or friends, and rarely went into these stories (Han) solo.

Which is why it was disappointing to start playing Skywalker Saga with my sister, only to learn that co-op still has plenty of issues.

Firstly, the screen divides itself down the middle, giving either player the left or right side of your screen. This isn’t too bad a split-screen option because it let both of us explore and do what we wanted in a level without being rubber banded to each other.

But it came at the sacrifice of better camera control, and being able to aim or even see anything beyond your head while aiming down sight in ranged combat.

Boss fights were also another pain point, especially because there are other boss fights throughout the nine episodes that work very well in co-op. The final fight in Empire Strikes Back and Revenge Of The Sith both reside player two to almost not being a part of the fight. 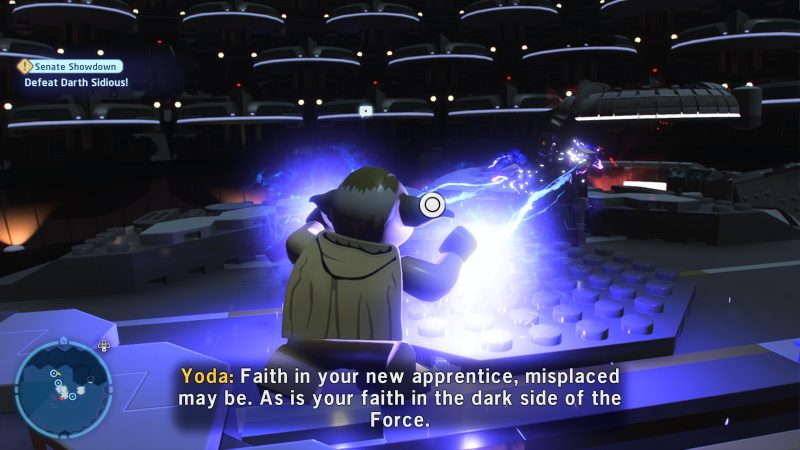 Even though there will be quick puzzles in which whoever you’re playing with will have to direct R2 to a console to solve one of his circular puzzles, it doesn’t really match up to the feeling of going toe-to-toe with Darth Vader.

Other boss fights in the game don’t have this issue, and both players are equally engaged throughout – but the camera and mechanical issues in co-op play are upsetting to see in a game franchise that many grew up on playing with others.

It also further brings up the question about online play, and why it’s not included at all. Being able to explore these levels with a friend online, without compromising screen real estate, would be a great addition.

Speed At The Cost Of Everything Else 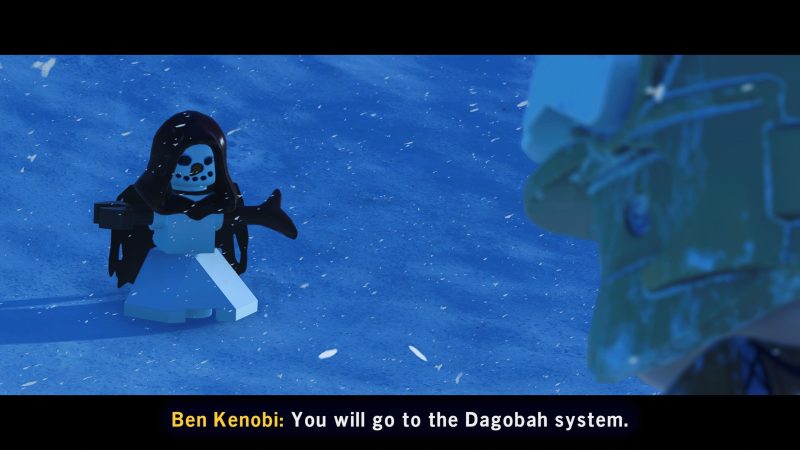 There’s plenty to do in this game, that much I hope I made clear. And it should be clear that though you can say that about all LEGO games, this one has more to do than any before it.

Which is why it feels surprising that the episodes are so short. Each one contains five levels, which makes for 45 levels in total. I get that’s a lot of levels on paper, but more than a few of these levels finish before you’re even certain the main part of the level has started.

The pace at which it goes through the films isn’t always bad – it’s Star Wars at the end of the day, and as a huge fan of the franchise, I think we all as fans could do well to take it a little less seriously.

So when the LEGO version of Revenge Of The Sith portrays Anakin’s hatred of the Jedi growing because they didn’t make him master and just gave him what looks like a padawan’s colouring book, it works.

But without that comedic context, the pacing doesn’t work as well as it could. This is like the boss fights in that there are examples of good and bad across the game, of the pacing working and not working.

Many cutscenes include one or two key phrases from the film’s scenes they’re portraying, and sound more like they’re written with the assumption you already know the story these games are based on. 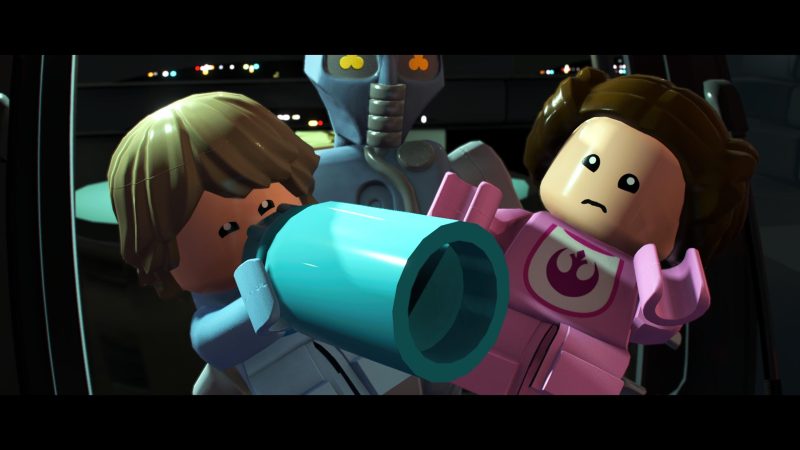 It’s not that I think that to be a bad approach, because like I said, Star Wars shouldn’t be taken too seriously, and no one is playing the LEGO versions of these games to experience the story – that’s what the films are for.

I just find it upsetting when the pacing works so well in episodes like Attack Of The Clones, where Anakin and Padme’s relationship build up is funny without it feeling fake and awkward, but other episodes are resigned to expository efficiency and aren’t given the same care.

The pacing and co-op play weren’t all that indicated a rushed or incomplete job, as I was surprised to find myself experience the odd frame rate hitch, which happened more times than it realistically should, for a LEGO title.

Most annoying was a bug I hit in The Force Awakens, which for some reason caused the starting point for Maz’s Castle to just, not be there. So I couldn’t initiate the rest of the level, or play through the rest of episode’s 7-9.

All I needed to do was start the episode in a new save file, which is easy to do as you’ll be given access to episode 1, 4, and 7 to start.

But it was a big inconvenience, because it made my hours of progress towards a 100% complete save file useless, and necessitated that I start over.

At the time of writing it’s not been fixed, so just as a precaution it’s worth playing through to the fourth level in episode 7, before diving into the rest of the game – lest you want to risk having two save files like me, one where I’ve gone through 1-6 and another unnecessary file for 7-9. 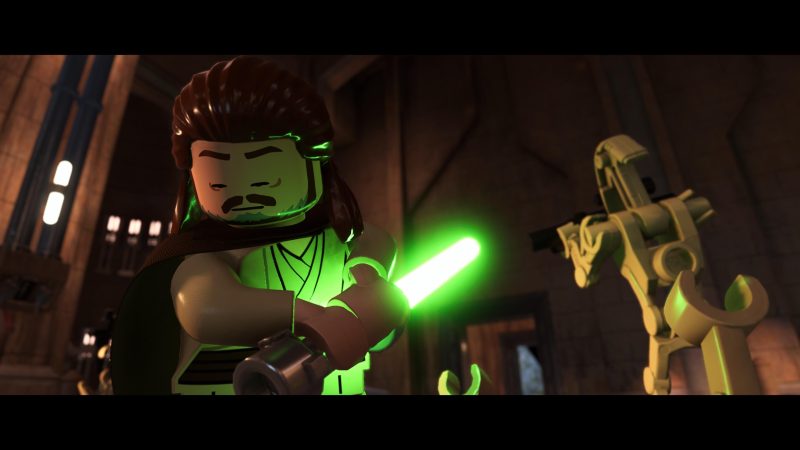 Despite all its faults, LEGO Star Wars: The Skywalker Saga is the definitive LEGO Star Wars game. Even more than The Complete Saga on the PS3 before it, and not just because it adds three whole films worth of LEGO content.

Having the whole galaxy to explore across each film, entirely changing up how these games function, while improving its core systems make this the best LEGO game yet, and the best LEGO Star Wars game.

But I don’t think it’s always hits its mark, and for all of the polishing that seemed to go into the game in certain aspects, much of it still felt rushed, and many mistakes that point more to being a result of developers being overworked, rather than a lack of talent.

It’s deeply upsetting that more time wasn’t dedicated to making co-op play the best way to enjoy the game, and the technical issues still prevalent further bog down what is otherwise a very fun, and funny game.

LEGO Star Wars: The Skywalker Saga is now available on PS5 and PS4.

LEGO Star Wars: The Skywalker Saga does a lot of things right that make it the best LEGO Star Wars game, and LEGO game to date. But it's level structure and pacing leave something to be desired more often than not, and co-op play has seemingly gotten far less care and attention than it deserved, putting a damper on what is otherwise a hilarious and fun experience.