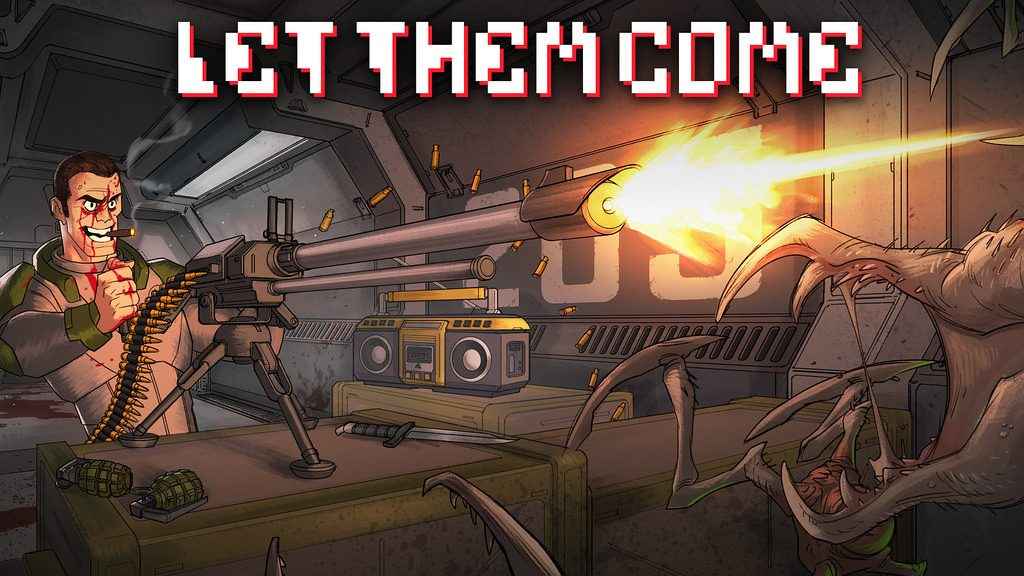 Let Them Come review code supplied by the publisher.

Imagine somebody loved that turret corridor sequence from Aliens so much that they went ahead and made a whole game about it. Well, that's exactly what Let Them Come is; a 2D corridor shooter where you find yourself fixed in one spot and must use all manner of weaponry to wipe out endless waves of nightmarish alien nasties.

Unable to move but able to direct the trajectory of your fire along a single plane, Let Them Come is as simple a shooter as you’re liable to get right now, but that doesn’t mean there isn’t a little more to this effort than initially meets the eye.

The first thing that you notice when you die, and this will happen extremely quickly the first time, is that you keep all the score you accrued prior to your death. Now this is crucial because score can buy you everything from new weapons and ammo, to secondary firearms, armour and gadgets to use in your next run against the alien menace in your next encounter.

So yep, if you haven’t guessed it by now, Let Them Come is indeed a roguelike but more than any other game that shares that particular element of game design DNA, the feedback loop in this game is much, much shorter not least because death comes so very quickly. The upside of this of course, is that sessions played in Let Them Come can started, played and finished very quickly, making the game a perfect no time-sink prospect for those looking for a mindless and swift way to spend their time.

It's not *all* just mindless blasting however, as some of the later waves you’ll run into in Let Them Come require some real thought as to how you'll take them down. For example, an explosive alien might be hiding among a pack of his fellows and if you prioritise him, you can wipe out the entire group in one go rather than picking off each one. Somewhere else that Let Them Come demands players be considerate is in how they expand their ammo.

Whilst the primary, no-frills weapon has an inexhaustible supply of rounds, the secondary weapons, grenades and other gadgets all have desperately finite times that they can be used and worse still, to replenish them costs, you guessed it, a bunch of score. What this means is that every special bullet you fire and every grenade you toss has a price tag associated with it and so, if the fear of getting overrun by your monstrous foes isn’t enough incentive for you to conserve ammo, then perhaps the notion of being utterly bankrupt and ill-prepared for the next battle will be.

Should you find yourself in the unfortunate situation having zero funds, Let Them Come, despite its roguelike nature, doesn’t endlessly penalize you for your lack of fiscal awareness. It achieves this through the Frenzy mode which dishes out a random buff that can turn the tide when things seem to be at their worst, ensuring that at all times, you never feel powerless.

Beyond the wave to wave killing, score accruing and equipment unlocking beats that Let Them Come proffers, the Versus Evil published product also boasts online leaderboard functionality and a variety of unsurprisingly challenging, though satisfying bosses for the player to face off against every 20-25 waves or so.

Where Let Them Come fails, is not because of any overt technical failing or overarching issue that direly detracts from it sum, but really just because of its modest ambitions; there just isn’t a lot else to do in Let Them Come than blast wave upon wave of incoming nasties. There are no menus stuffed full of modes, no additional content and very little to do beyond killing, looting and getting stronger. If however, you’ve made your peace with that, then Let Them Come could be just what you’re looking for.

Costing roughly the same as extra value meal from McDonalds, Let Them Come provides ample bang for buck with its instantly accessible bouts of corridor blasting fun; just don't expect too much from it and the pair of you will get on just fine.

Did you enjoy this Let Them Come review? For more details on the game, check out the official hub for Let Them Come.

Let Them Come takes a singular concept and wraps a whole game around it to great effect. Let Them Come might not be the deepest shooter around, but its bite-sized morsels of alien blasting fun will assuredly keep you coming back for more.