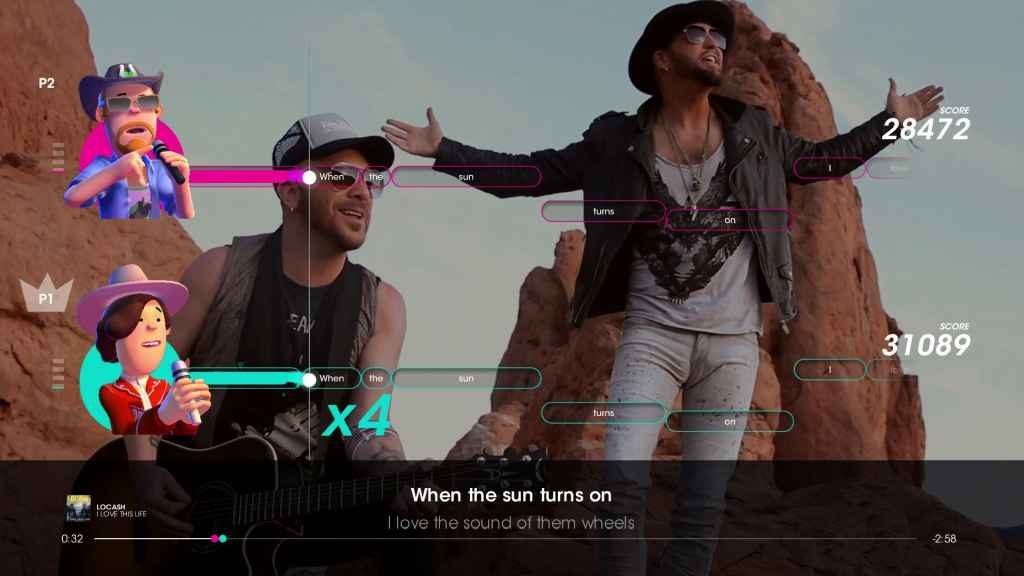 Games journalism allows one to play games that one would never play under other circumstances. I have never played a Let’s Sing title before. But if I did suddenly strike out and decide that I wanted to check one out, the last version I would have chosen to play would have been Let’s Sing Country. This is not because I expected Let’s Sing Country to be a bad game, but rather because I feel that modern radio-pop country is a blight on our civilization.

Let me be very clear: I love certain country music. I’m just prickly and particular. I grew up on Waylon, Willie and the boys. I have tickets to see Sturgill Simpson in the spring (for the second time). The Highwomen album is in heavy rotation in my car. I own the obligatory middle-aged-man Johnny Cash t-shirt. But I can’t stand the earworm auto-tuned Maroon 5-with-a-banjo pop music they play on country radio these days. It gives me hives and diarrhoea, for so many reasons.

But what the hell. Let’s Sing Country.

For those who haven’t tried a Let’s Sing title before, here are the basics: The player is presented with a list of about 30 songs. The player chooses a song. Let’s Sing begins playing a washed-out copy of the music video, with a strange little hillbilly-stereotype avatar superimposed off to the left, gobbling into a microphone and making no attempt to lip-sync to the song.

The song that plays with the video is the actual studio recording by the original artist – no creepy cover versions here. The player sings into a microphone along with the artist – this isn’t karaoke, the full vocal is included for you to sing with.

As the song plays, the lyrics appear on the bottom of the screen, while a separate representation of the lyrics slides from right to left across the music video towards a line. When the words hit the line, it is time to sing them. The player’s job is to sing the song correctly, hitting the correct notes and managing the timing of the lyrics (you all know how this works, right? Kinda like Guitar Hero or Rock Band?).

Points are awarded for accuracy and tone, and if you do well for a little while, a multiplier appears that can boost your score considerably. That’s pretty much it. There are some different modes that let you sing asynchronously against other players online (there are leaderboards for every song) or sing duets if you have enough mics.

The problem is, if you don’t know the songs, you are screwed. As I stated above, I don’t listen to modern country radio, so the only songs I knew in this collection were Kenny Rogers’ “The Gambler”, and Glen Campbell’s “Rhinestone Cowboy”. But that’s okay, because I have a six-year-old daughter.

If you don’t own an appropriate microphone, a “Let’s Sing” app exists, allowing you to turn your Android or iPhone into a mic. So long as your phone is on the same WIFI as your PlayStation, you can link with the game and start howling. I tried this out and the functionality was a bit poor – causing a delay between when I started singing and the game registering my voice. This caused me to try to start each note ahead of time to allow the game to register my voice. I had much better luck with the mic on my headset.

When she sees me pull out my phone, the irises of my daughter’s eyes turn into pounding red hearts. She clutches her chest in excitement. “Are we going to play Let’s Sing Country?” she shrieks. She skitters across the hardwood floor towards me, limbs flying in every direction, looking for all the world like Bambi on the ice pond – if Bambi was super excited about singing shitty country songs.

Once in the game, my daughter howls and mumbles into the phone, speaking in tongues and frightening her siblings and her mother. This usually wins her a bronze trophy, and advances her Let’s Sing Country XP slightly, occasionally unlocking a fresh hillbilly avatar. This is the only sort of real advancement structure the game has outside of some leaderboards, but my daughter finds it deeply satisfying. She especially loves it when she unlocks a Let’s Sing Country stylized hillbilly-girl.

After tormenting myself with a Google playlist featuring all of the songs on Let’s Sing Country for a few days (in an insane attempt to learn them all), I was horrified to find myself singing one of the songs in the shower one morning. Unable to come to terms with this, I immediately bought a few extra song packs from the PlayStation Store, effectively converting Let’s Sing Country into Let’s Sing The Cure.

When it’s my turn, I fumble through “Friday I’m in Love”, enjoying the nostalgia of seeing the video again, even if there is a non-lip-syncing Bubba-in-a-trucker hat convulsing off to the side. (Note: the fact that I can also sing “Nothing Compares 2 U” in this manner definitively proves that neither Prince’s estate nor Sinead O’Connor have any control over the rights to that particular song or video).

Wait. You thought that from the tone of my review that I don’t like Let’s Sing Country? If that was your assumption, you are dead wrong. Did you not read the part where I play Let’s Sing Country all the time with my kid? We’ve been playing this thing every night for at least an hour.

It’s tough to judge Let’s Sing Country on videogame terms, because it is barely a videogame. It is more akin to a goofy toy to play with at parties, or with family after dinner. But I’m certainly not going to slam Let’s Sing Country because I don’t like the music. For what little the game is doing, it is doing it fairly well. Let’s Sing Country is silly fun – nothing more, nothing less.

When my family plays Let’s Play Country, we laugh and laugh at how ridiculous it is, and how ridiculous we are. We hand the phone to the three-year-old and listen to him sing “Old McDonald” over a song about some rando’s hot girlfriend with her bare feet on the dashboard – and he still racks up some points. It’s hysterical.

Obviously, you are going to get more mileage out of Let’s Sing Country if you like this sort of music and are familiar with the songs (for all my teasing, I don’t hate it THAT much – a lot of these songs are fairly catchy). If you aren’t a country fan, you might be better off with a different Let’s Sing! title. And don’t expect a lot of structure beyond a barebones menu and the leveling system.

But if you dig modern country and you don’t mind looking foolish in front of others, you could do worse than Let’s Sing Country.

It is what it is, and that isn’t half bad.

How’s that for a country lyric?

Let’s Sing Country is out now on PS4, Xbox One and Nintendo Switch.

Let’s Sing Country provides a way to sing modern radio country songs (and a couple of classics) with friends. If that sounds fun to you, then you will likely enjoy this game. It doesn’t need to be more complicated than that.