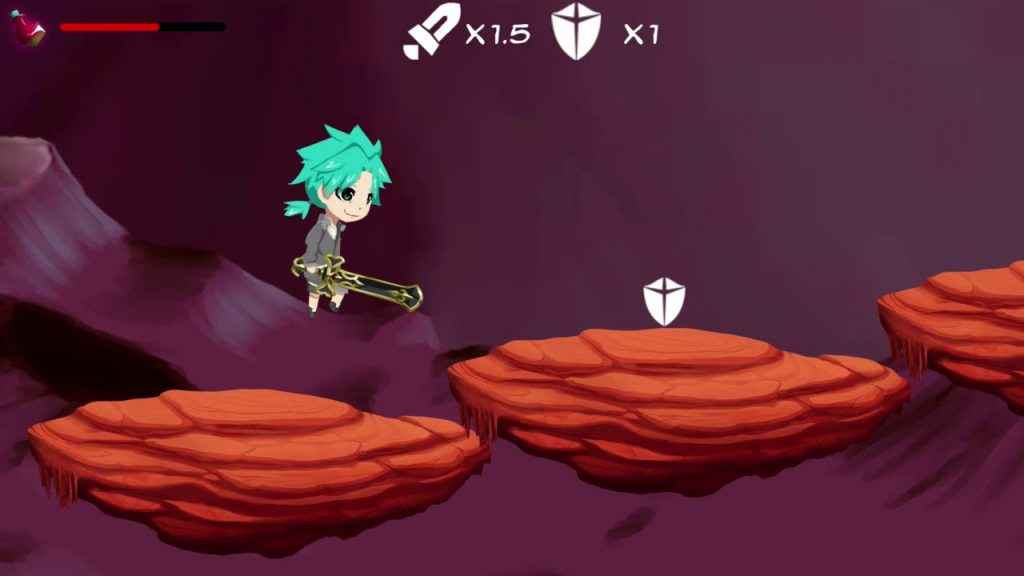 Little Adventure on the Prairie is down there as one of the worst sacks of bubbling baby filth I’ve ever had the displeasure of ‘playing’.

The story in Little Adv…there isn’t one. There’s pretty much zero reason for anything. There’s a protagonist who is a rejected anime template, and there’s some shitebulb enemies. The occasional jump happens. Sort of.

The objective in Little Adventure on the Poop-chute is…to hit stuff whilst moving right. Though occasionally, you get the sheer exotic thrill of going left! You might pick up the odd power up for your sword or shield in the height of the excitement. Though our blue haired anime mannequin of a protagonist carries no shield nor armour to upgrade. Nice clothes though.

Where to start on this writhing mass of maggoty gammon that calls itself a video game? The positives! Lets discuss the positives of Little Adventure on the Prairie shall we? You can mindlessly knock out the Platinum for it in your lunch break. Then feel instant shame and regret. Like a really sad wank.

The visual style of Little Adventure on the Pisstake is inspired by using a set of stock assets that are then scattered on top of a selection of children’s drawings that have been stapled together to create ‘scenery’. It’s…basic. The way it’s animated though is the thing to truly cherish about Local Adventure on the Public Common. It features fairly rigid jumping animation and combat movement that looks like the protagonist is trying to tap a large dog on the nose with a rolled-up newspaper. The combat is certainly…distinct. There’s a complete lack of continuity towards the hit boxes of both your character and the enemies. One moment waving your sword above the enemy’s head will murder them, the next your getting tonked by the air that surrounds the enemy. while your blows do little.

It means the go-to strategy for every. single. fight is to stand roughly sword tip-to-sword tip. The enemy don’t invade your personal space unless you let them, which is very courteous for goblins and flame bastards. This allows every ‘encounter’ to boil down to a dull, repetitive thud of the attack button until the enemy simply disappears. Then you move onto the next one and the nex…oh please make it end.

Jumping is not exciting. The ‘perilous jumps’ you’ll have to cross are harmless to the point of being pointless. You might be (will be) tempted to throw yourself down a chasm on occasion. Just to make the game do something to make you register a positive emotion. The only challenge jumping provides in fact, is if you stand too close to the lip of a higher platform, you’ll get stuck.

Afro Samurai 2: Revenge of Kuma Vol.1 Review -A disastrous experience all round.

There’s 12 levels over three ‘worlds’ and in all honesty, there’s next to no attempt at real variety in level design. Need to show some form of level progression? Simply throw two or three enemies at the player instead of one at a time. The levels themselves end when all enemies have been vanquished. You hit the last one and a results screen just abruptly pops up declaring you’ve finished with all the explosive fanfare of a yawn in an empty room.

Thank the Elder Gods that it’s mercifully brief. You could feasibly finish it in under half an hour (the only time-sapping struggle that might add to that is from an increasing sense that all life is futile) and your reward/eternal curse is to have a shiny Platinum trophy for your toil. Everything about Little Adventure on the Prairie is cheap and nasty. It works, in the most very basic sense, but there’s literally no invention or ambition to this fetid dung heap. The only level I can even comprehend recommending it on is to gain perspective. This is sobering if you look at a mainstream title and call it trash because the frame rate drops. Or if it features microtransactions. Little Adventure on the Prairie, a ‘full game’, costs about the same as the average microtransaction. Yet its still somehow more crude, cynical, and offensive.

To top it all off, the worst bloody thing about this toad spit title, is that it has absolutely nothing to do with Little House on the Prairie.

The reviewer purchased a copy of the game for review. Again, we don’t know why.

It may be relatively cheap, and alluring to trophy-hunting fiends, but is losing a portion of your humanity really worth playing a game as despicably dire as Little Adventure on the Prairie?