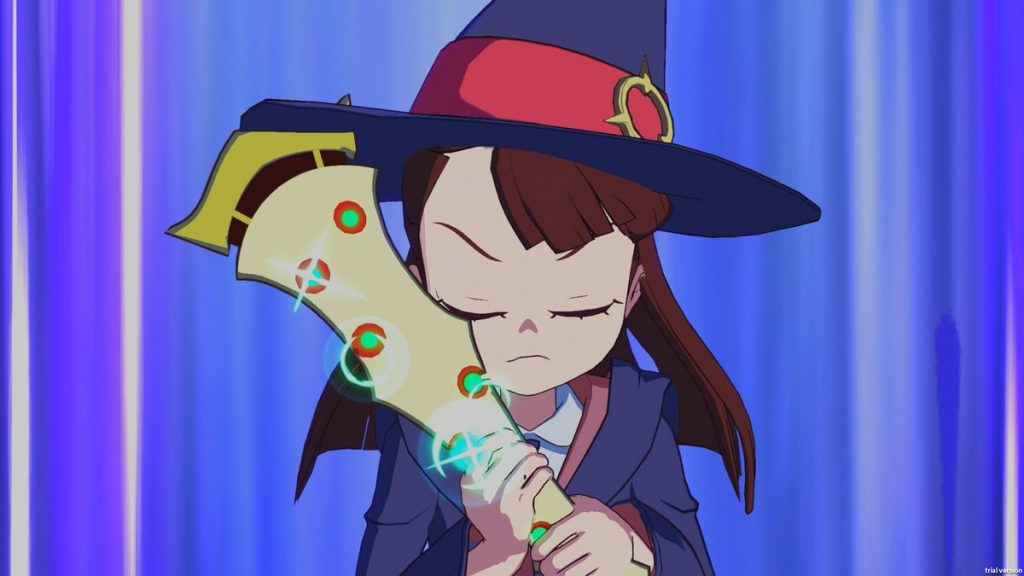 In an anime world of posturing powerhouses and heady levels of fan service, the existence of Little Witch Academia is heartening. It’s a fun, almost wholesome, series by comparison to most of the medium, and its central premise has been aching for a video game adaptation.

The good news is that Little Witch Academia Chamber of Time is that adaptation, bringing so much of what makes the show such a heartening, entertaining prospect. The bad news is that it hasn’t brought a great deal of interaction with it.

For the curious, yet uninitiated, Little Witch Academia centers on Akko, a young girl who joins a prestigious school for witches in a bid to emulate her childhood icon, Shiny Chariot. Sadly for Akko, trouble, and calamity follow her every decision. She’s not exactly a professional sort, let’s say that much. Yet Akko, in true anime tradition, isn’t as useless as she appears and forges friendships with several classmates as adventure after adventure (usually caused by a mishap on Akko’s part of course) takes place.

Much of this backstory has occurred by the time the story of Chamber of Time takes place. Here Akko and her pals are about to finish school for the Summer, but a mysterious curse is causing the last day of term to repeat itself over and over, with only Akko and the gang aware of the phenomenon.

So the group, including the gloomy Sucy, booksmart Lotte, and talented, but elitist, Diana, set out to figure out how to break the curse, and finally end the day.

This means the game also repeats the day, acting as one big puzzle you figure a smaller chunk of during each run until you have all that you need to break the curse. While this means you get to discover plenty of the little story tidbits and missions that you might otherwise miss on a timed schedule, it also leaves the game open to the dreaded fatigue of repetition. And LWA: Chamber of Time is a game highly susceptible to that particular weakness.

Chamber of Time is essentially three games stapled together. Interactions between characters are akin to a visual novel (and despite limited animations, look lovely). Here the writing is very much in keeping with the show. Smart, sweet and snappy. It does, however, retread a lot of what fans already know.

Then there’s 2D side-scrolling dungeon action, which provides the most hands-on aspect of the entire game. Here, Akko and two interchangeable buddies fight all manner of beasties, grab loot, and avoid all sorts of traps before facing off against a boss character (which are the highlight of these sections). It’s pretty standard 2D scrapper fare, and the animation is again noticeably skimped on. Dungeon variety is pretty decent if nothing you haven’t seen before. These sections are a blessed distraction from some of the mundanity found elsewhere.

Yet the weakest portion is the one that arguably takes up most of your time.

Running about the school as Akko is your main job in Chamber of Time. It’s how you find missions and how you interact with others. At first, this is pretty pleasant. There are some neat 3D recreations of the school and characters from the series that really capture the spirit of Little Witch Academia. Unfortunately, it becomes apparent quite quickly that there’s almost nothing interesting to actually see or do in this environment. It’s merely set-dressing to drag things out as you reach each mission/quest.

This means moment to moment, Little Witch Academia Chamber of Time is often a dull, turgid affair. The map isn’t the clearest during the early parts of the game, and that only extends the trudging about. It’s an incredibly frustrating side of a game that really could have offered more. What action and interaction there is ends up severely limited and repetitive.

It’s unfortunate because there are glimpses of what could have been. What animation is there is so wonderfully in keeping with the series that it only highlights how blank and uninteresting the world design is. The love for the series is on show in so many small ways, then half-measures are applied everywhere else, creating a disparate blend of sadness and longing for that little bit extra. If the game world had been that bit more interactive instead of a glorified timewaster, then it would be a lot easier to forgive the rather shallow overall package.

Little Witch Academia fans will get a kick out of the effort taken to recreate much of the show’s qualities, but that doesn’t excuse the rather limp video game attached to it.

The fanservice (not that kind) Little Witch Academia Chamber of Time provides can be ever-so-pleasing. Unfortunately, it's not enough to excuse a rather dull game.