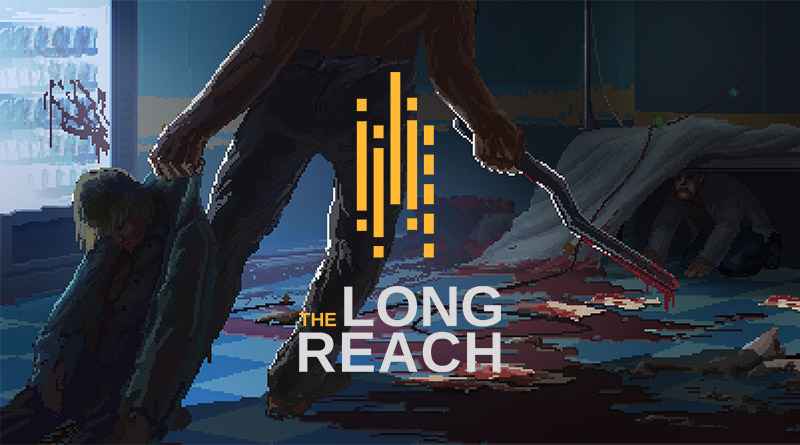 A slow-drip of dread creeps into the opening of The Long Reach. Your character makes a mundane trip to the shops, has trivial musings about his troubled home life with the shopkeeper, and all the while you know something is going to happen that corrects this normalcy. It does, and it leaves you unsure quite what the hell is going on.

Then it does it again, and is just as effective. Then you’re left with a long bout of unease and waiting again.

The Long Reach feeds off confusion and enjoys spiking your adrenaline during otherwise mundane tasks and conversation. There’s a dreamlike quality to the way things play out, but the conversations that play out add a splash of reality to proceedings, and that only amplifies the creeping dread. This 2D sprite-based horror adventure is indebted to Lone Survivor and The Cave in terms of design and storytelling, and that’s fine company to be in. Its simplicity doesn’t detract from the lovely pixel art visual design, that captures the moody, gloomy atmosphere of the New Hampshire setting and the strange occurrences that are happening there.

From flickering lights, to signs of struggle, to pitch black rooms, there’s plenty of visual cues for something being very very wrong. It’s something that has worked well for the likes of Lone Survivor and Claire in recent years, and a lot of 2D indie horror has relied a little too heavily on it for it to feel truly special here, but that doesn’t prevent The Long Reach from having its own distinct style.

The soundtrack also has an air of the familiar about it. Yet once again, it is pitch-perfect for the game it accompanies. There’s not an ominous note out of place here, and it highlights The Long Reach’s significant moments of chaos exceptionally well.

Discussing the story too much would be unwise. There’s an air of the mysterious about The Long Reach that slowly unfurls as you progress, and to get into too much detail about it lessens the impact. What you should know is that it involves an experiment gone wrong, and it escalates from horror into an very different beast as it progresses. It’s also worth noting that despite the manner in which The Long Reach starts, this is very much a slow burn survival horror where avoidance is usually the best course of action. Still, it packs a lot into a couple of hours, and while not all story threads in that time reach any kind of satisfying conclusion, the overall payoff is well done. The focus on humanity is a key part of that.

You’re not a soldier, you’re not even particularly special as a human being really. The focus is on conversation and puzzles as a result, but it rarely detracts from the unease that grows outside of that.

The conversation system is interesting. It’s nothing novel in execution, multiple choice answers, text speak et al. What it does really well is ride the line between what you’d class as ‘movie talk’ and ‘real-life talk’. You can be a grouchy, sarcastic arsepiece if you so wish, and it is highly amusing to see how people react to that, but it’s the way it’s written that really helps to make the situation and characters something to invest in. There’s a lot of vagueness about details, so there’s little in the way of trite exposition-based dialogue as a result. One of the best early conversations sees your character asking another what’s going on. The other person belittles you and cites your lack of understanding about the intricacies of the science behind any explanation they could give you, but amusingly, you can insist you want to hear the long-winded attempt at an answer, even though everything has gone to shit and you’d probably be better off not standing around pretending you understand. It’s a great example of how smart the writing can be in The Long Reach. The comments your character makes when you incorrectly try to combine an item with an object are also fun, if a little on the repetitive side.

That’s where the puzzles come in. Taking cues from both survival horror and classic point n’ click adventures (more so this), there’s a lot of combining found items with objects in the environment. Where it leans a bit further into point n’ click classics is that you’re required to think outside the box a lot.

There’s obscure solutions for many puzzles. The simple act of making a lift work for instance, is solved in such an oddly roundabout way that it actually makes sense. The things you have to do to get to that point are frankly bizzare, but in context of using what you have available it is a refreshing alternative than ‘you found a rusty key in an old statue by pushing it’ school of thinking. The downside of this is that there can be a lot of wandering about in frustration as you try to figure out what strange way you have to solve a puzzle to progress the story. It’s great in that it’s a neat throwback to classic adventure puzzles. You should be made to think about solutions, that’s what makes solving the puzzle so utterly satisfying. The fact that some of The Long Reach’s puzzle solutions are so odd often counter any frustration you may have felt with their sheer gall. If your mind isn’t wired that way though, the result is you spending ages trying any object with anything in the hope of achieving something, and sadly, that’s going to detract from what The Long Reach does so well.

When not puzzling and following the story, you’ll likely be confronting the horrors lurking in the fictional town of Baervox. The Long Reach welcomes the idea of running and hiding as an option, but there’s also some inventive ways to deal with the threats that come your way. Mostly though, it’s about the running and the hiding, and given you’re not exactly a combat specialist, it is at least in keeping with the story being told.

The Long Reach may borrow and pay tribute to a fair few other sources, but it very much has its own voice screaming out from that mixture. It’s a well-written thriller/horror game with some really well thought out, yet occasionally frustrating, puzzles. If you’re searching for something a bit different from your horror, but still want the safety net of familiarity to cushion you, then The Long Reach is a worthy purchase.

What The Long Reach may occasionally lack in originality, it more than makes up for in inventiveness, personality, and bubbling slow-burn horror chills. This is a well-written, atmospheric horror adventure, and it deserves your attention.