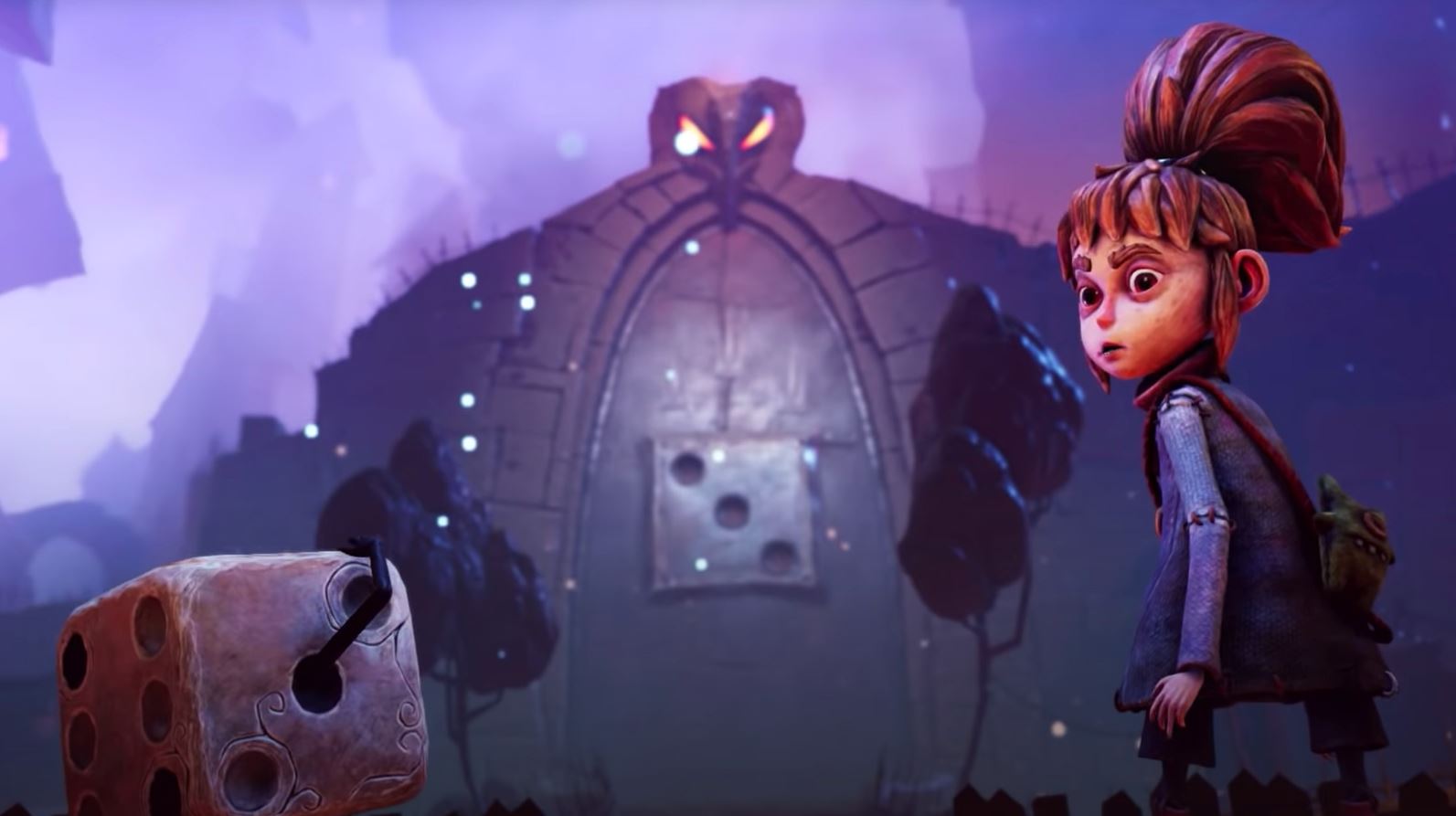 Lost in Random PS5 Review – You know what I love just as much as video games – board games. So when I first saw Lost in Random by Zoink Games and EA Originals, I was very excited. Grab your dice, lay out your cards and garner your meeples. We are about to go on a board game journey of video game proportions.

Lost in Random is a game about chance, a game about rolling dice, playing cards and social standing. In Random, a world divided into six districts by the Queen, your social standing and location is decided by the face of a die. How unfair to be segregated and boxed in by random chance.

From the Oners, who live in squalor and dig around in the trash, to the sixers who live with the Queen in decadence. Your creed in life comes down to RNG. How video-gamey! Lost in Random kind of mirrors the real-life world, I like that. Our world is divided unfairly, not quite to the twist of fate this game is but you know what I mean.

At the start of the game, you join our protagonist, Even and her close sister, Odd. The Queen’s advisor has visited Onecroft and any child who is twelve or over gets to roll the dice to decide their fate. After failing to hide, Odd rolls a six and ends up being taken away to start her new life with the Queen.

Even then see’s a ghost, has some weird dreams and decides to go on a rescue mission. You know, standard adventuring fare. Where would we be in games without loved ones and siblings going on quests with very little chance of success? Nowhere I would imagine. 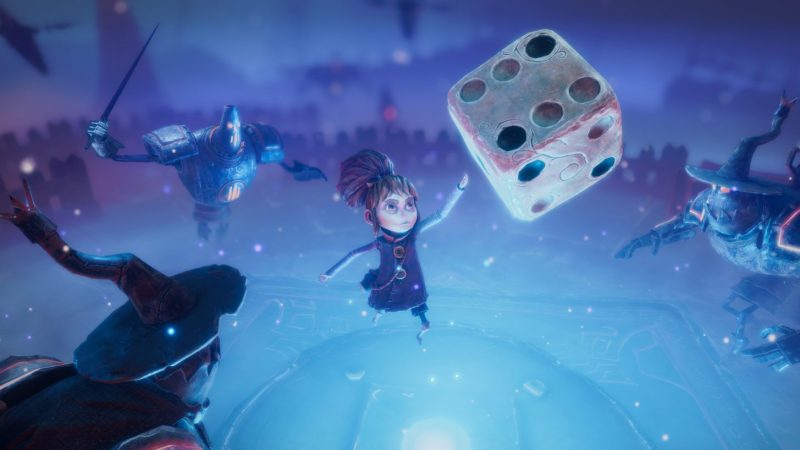 Back in the old days, the world was inhabited by Dice Wielders, powerful dice battling warriors but that was a long time ago. The Queen has since outlawed the use of dice so she holds all the power. Luckily, as you may have guessed Even finds what can only be described as a fantastical sidekick called Dicey. A magical fellow who helps Even on her quest, fight the many foes of Random and go about rescuing her sister.

Dripping With Board Game Goodness

Everything in Random is based on cards, dice, random chance and board games. Sounds super to me, a lover of all of those things. Character names, game systems, locations and an all manner of details are based on the ever-growing hobby of board gaming.

Lost in Random drips with these quirky little dice-based details and as a fan, I loved seeing these little idiosyncrasies littered throughout this very unique journey. Walls are covered in dice symbols, peoples names are related to game tropes and items, it is all very thematic. 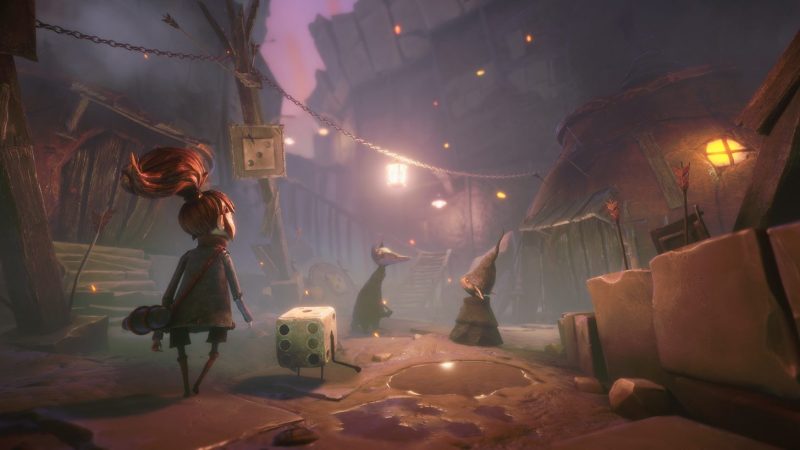 As you travel through the six wards of Random, upgrading Dicey and buying or finding more cards you will come across many eerie, weird and wonderful characters. From people with upside-down faces to small twins that share husbands, this game is packed to the brim with intriguing characters and I relished finding out about their twisted, uncanny lives.

As with every game of this type, you will come across collectables, side quests and chances to gain more coinage. Each area, while containing the main quest has a few diversions to keep you entertained and boy will you be entertained. The banter between Dicey, Even and the at times, hilarious Narrator kept me giggling all the way through the game.

Combat in Lost At Random is as unique as it is moreish. It works on many levels like a well-baked cake. It consists of two halves. Firstly you use your trusty slingshot to hit crystals that spawn in locations on the enemies body. These crystals both power up Dicey and draw cards from your collection. These cards and Dicey, in combination, are where the meat of this system comes from.

When you have enough power stored up in Dicey you can throw him in the air, don’t worry though, he does not mind, he’s a die after all. Whatever number he lands on is your useable power and then while the action is paused you can use any of the cards in your hand as long as it’s within your power you rolled with Dicey. These cards come in Attack, Cheat and Defence varieties and can create a dice-load of different effects. 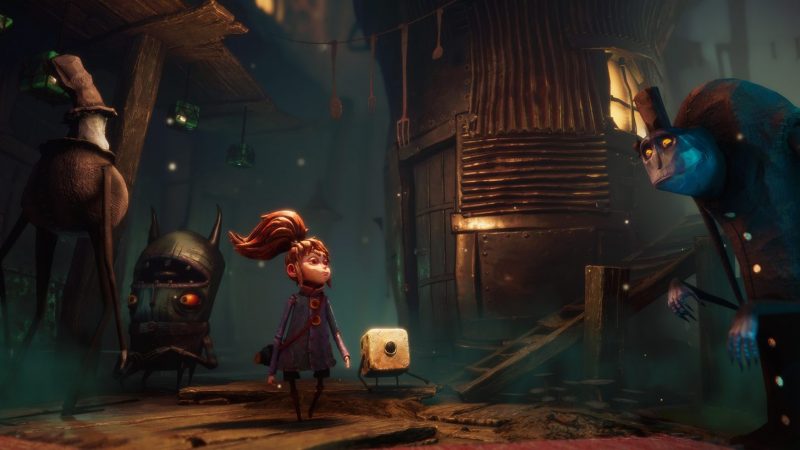 You can spawn weapons so you can attack directly, you can buff yourself, spawn bombs, reduce the power required for cards in your hand, re-draw cards and even heal yourself. As I am sure you can see this system gives the player a lot of choices and allows you to make tactical decisions, even if it is sometimes, down to chance. When you attack or press triangle everything un-pauses and you repeat until everything is dead. Fun times!

Lost in Random also has a deck-building element, what would a game about board games be without a bit of trusty deck-building? As you meander through random you will come across a bloke who is half man half cabinet, (I know, I told you this game was full of weirdos). He sells cards and you can add cards to your deck and customise it to your play-style. I really adored the whole system, it’s tactical, rewarding and very board-gamey.

From a presentation standpoint, it is hard to talk about the graphics without giving a shout out to Tim Burtons Nightmare Before Christmas. The similarities are uncanny. All the characters have that wooden puppet look to them and everything is extremely grim and dank. It’s extremely beautiful, don’t get me wrong but it’s a dark beauty that not everyone will take to.

It’s the same story with the sound work, it fits the visual style and the voice acting is very good. Again though, some people may not like the style on show here and that is just the way things are. The voice work is often creepy, very eerie and a lot of the time borderline insane. It’s right up my street to be fair and I adore it but each to their own. 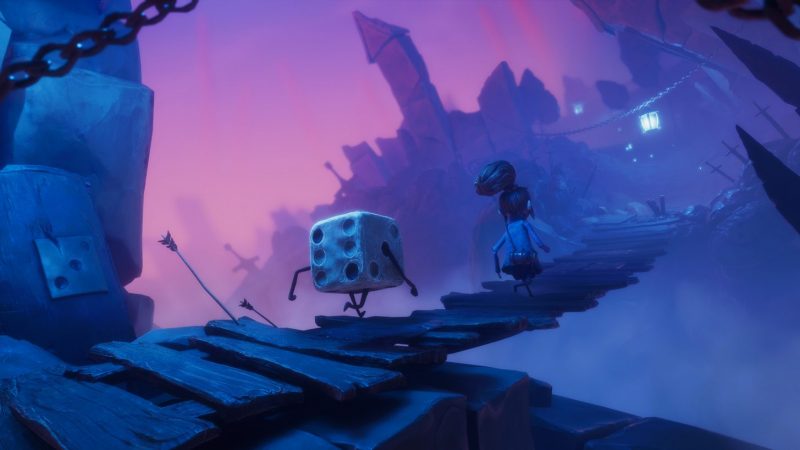 Performance-wise, I did have the odd weird janky occurrence in the game, nothing game-breaking but I had the odd issue activating something or shooting targets but I could count these occurrences on one hand. Outside of a few minor weird instances, I had a stable, enjoyable time with Lost in Random and there were no other technical hiccups to speak of.

Give It A Chance

Lost in Random is a very unique game. That is something I hold in high esteem. It is not very often I play something that really feels different or new and Lost in Random does that. It may not be perfect, it may be a bit rough around the edges in places but its magnificent world, its beautiful art style and great combat system elevate it above those minor quibbles.

Lost in Random is a game about chance and all I can say is that you should take a chance on it. Roll the dice, you never know you may find something weird and wonderful to lose yourself in. I definitely did. Lost in Random is a board game video game hybrid and two of my favourite things in this world have collided, not only that have spawned something unique and enjoyable. Simply wonderful.

Lost in Random is out now on PS4 and PS5.

Full of character and charm, Lost in Random is a witty and enjoyable tale that at times, mimics our own. It's eerily beautiful, well made and fans of board games will fall in love with it. The combat system is rewarding and has just enough nuance to keep it interesting until the end. So roll your dice and take a chance on Lost in Random. It is a unique game amongst its current peers.