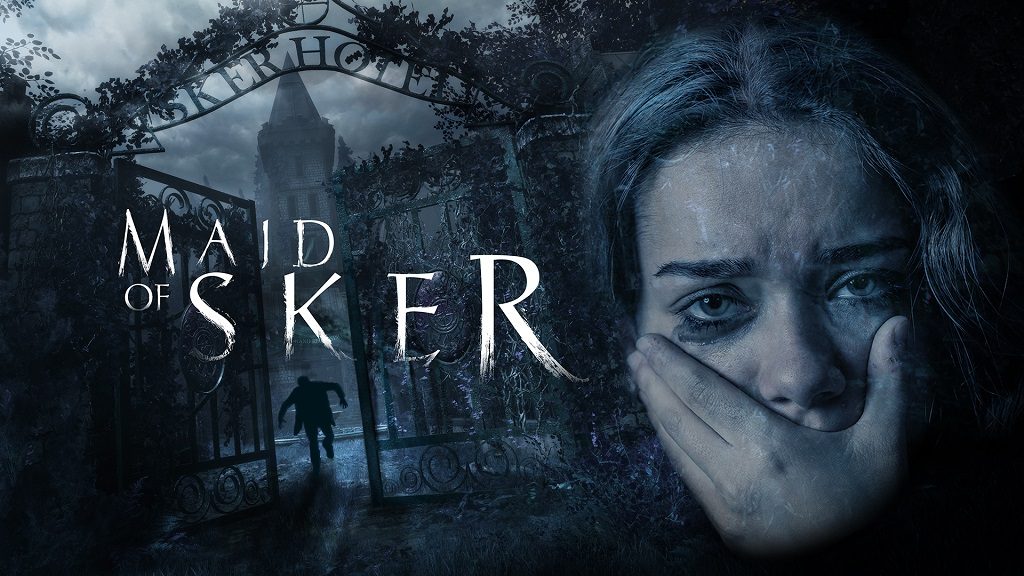 Maid of Sker PS4 Review – The real Sker House near Porthcawl in South Wales is said to house two ghosts – the captain of a shipwrecked on the rocks of the nearby Sker Point and Elisabeth Williams, who was locked in a room of the house by her father to prevent her from eloping with her lover. The book ‘The Maid of Sker‘ by R.D. Blackmore published in 1872 took elements from the legend, fashioning a love story around an orphan washed up on the shore.

Wales Interactive, whose horror pedigree includes The Bunker and Don’t Knock Twice VR, have elaborated on the legend and the book to produce a survival horror based on strange songs used to control the family and staff of the hotel owned by the crazed proprietor.

A Trip To Sker

The main protagonist, Thomas, receives a letter from his lover, Elizabeth, pleading for his help as she is incarcerated in her father’s hotel. The story opens with Thomas on a train to Sker with the intention of uncovering the mystery of the sinister goings-on around his spouse and the family business. On arrival at the station, you take control of Thomas and you make your way through the beautiful but foreboding countryside leading towards Sker Hotel. Initially, it appears that Maid of Sker is a ‘walking simulator’ where exploration reveals the story with very minor interactions throughout but it’s not too long before the action kicks in.

Increasingly ominous signs appear once inside the dusty and run-down house, with regular phone calls to the lobby from Elizabeth trapped on the second floor, breathless and scared by the sounds she hears outside her room. The hotel’s sinister inhabitants soon show themselves, following an encounter behind a closed door with a hotel guest who is swiftly despatched once he is heard begging for help.

You soon realise that the ‘Quiet Ones’ roam the hotel. Blind and bandaged about the head with the intention of homing in on any sounds they hear, pummelling the life from anyone who doesn’t hide or hold their breath. As Thomas, you must primarily use stealth to avoid death with only low passages or the save rooms acting as places of respite.

Later in the game, a ‘Phonic Modulator’ enables you to momentarily deafen and disable the deranged drones, but this steampunk weapon’s cartridges are few and far between so you soon realise that it’s for emergency use only. Aside from this lone defence tool, there’s no ability to fight back so Thomas spends the majority of his time skulking quietly around the bandaged freaks or pegging it away should they be alerted to his presence. Despite staying perfectly still and holding your breath, if you’re near the ‘Quiet ones’ pre-ordained trajectory, they’ll ‘see’ you regardless, which hugely undermines the stealth mechanic, unfortunately.

The save points are old gramophones scattered frugally around the hotel in rooms with green doors. As well as the ability to create a single save point, a snippet of dialogue is revealed giving further clues as to what the blazes is going on. Letters and music sheets can be collected for further clues, and other collectables include wooden dolls and four cylinders which are required by Elizabeth in order to put a stop to the madness.

The hotel map slowly reveals itself through exploration or instantly should you come across the rolled-up map on whichever floor you are on. Marked on the map are the save points, interactive points of interest marked with a question mark and telephones with which to communicate with Elizabeth when she calls.

Puzzles are limited to simple switches matched to a nearby diagram or the ‘turn one switch on before the next’ deduction method so the majority are neither taxing nor satisfying. Exploration of the hotel and its grounds is enjoyable, however, and the time spent in each of the floors and outdoor areas feels purposeful due to the excellent level design. The gameplay is essentially linear and doesn’t require constant backtracking to previous areas once you have figured out the main aim of how to progress. Unless, of course, you want to scour each of the rooms with a fine-toothed comb in order to find all the collectables, but fortunately none of them are hidden in obscure places.

The simplistic gameplay, limited controls and staggered save points are all throwbacks to a bygone era of horror games, namely Resident Evil and Silent Hill. While this brings with it a feeling of nostalgia, it also highlights how little originality Maid of Sker possesses in terms of gameplay.

The stealth is another major sticking point, as it just doesn’t work due to the limited A.I. and the fact that even stringently muted behaviour often triggers an attack. Other times you can have a conversation with Elizabeth on the phone and the bandaged boys merrily follow their invisible walking routes ignoring you completely. The hotel is littered with objects which would make excellent weapons in order to fend off the enemies even for a short time, but unfortunately, this isn’t an option. Unless you like creeping around for the entire duration of a game without the ability to fight back, you’ll find it extremely difficult to warm to Maid of Sker.

The flow of the story is also interrupted by some of the more obscure tasks, often involving trying sweep the cursor across every single wall and table in each room in a desperate attempt to find a missing switch or object. Naturally doing this while being beaten from behind becomes rather tricky, and multiple attempts to discover what is required are necessary, prolonging the tedium. A less vague hints system would have helped.

Visually, there’s a faded brown veneer which permeates all but a few scenes which is effective in sustaining an atmosphere of grime and depression, but the lack of clarity and monotone colour scheme becomes seriously wearing. The scenes which occasionally deviate from the dull palette are beautifully rendered and release the player from the graphical tedium, but they are few and far between. The ageing scare-fest Layers of Fear still manages to trump Maid of Sker in comparison, with vivid and imaginative interiors proving that dinge isn’t essential to create a menacing environment.

Aurally, the effects do a good job of creating a constant foreboding atmosphere with a collage peppered with perpetual creaking like a listing wooden caravel, relentless footsteps and the panting of Thomas.

What the game does best is to conjure an oppressive and creepy atmosphere within the well-realised hotel and grounds and combined with the compelling narrative it creates an experience which would sate the majority of players eager for a slice of terror with the unique selling point of Welsh folklore and body horror. It’s a great shame then, that the antiquated gameplay and muddy visuals do their worst to cancel out the potential of the game, trying the patience of even the most tireless horror fan.

Despite all the negativity I’ve directed toward the game, horror fans will forgive the foibles and relish the intriguing story which unfolds through the excellent voice acting, and multiple endings are available for those wanting to replay the story. Aside from the biggest offenders, namely the save points and the lack of offensive measures in lieu of a decent stealth system, Maid of Sker is worth a look if you think it’s up your (dark) alley.

Maid of Sker is available now on PS4

An excellent premise, a compelling narrative, and an effective atmosphere of dread are scuppered by muddy visuals, an antiquated save system, and stilted gameplay mechanics lacking in new ideas. Multiple endings reward those who persevere though, so fans of folk-horror should sample the wares within Sker Hotel, but for most the game will feel stuck in the past.